The Sofirn Q8 is a flashlight that uses four 18650 cells and has four emitters. The e-switch has an indicating feature, too! Read on!

This light is as good as I recall, and still so much fun.  It’s a great mix of throw and flood, particularly with the HI emitters.  The UI is so versatile, too.

^ Standard measurement disclaimer: I am an amateur flashlight reviewer. I don’t have $10,000 or even $1,000 worth of testing equipment. I test output and such in PVC tubes!! Please consider claims within 10% of what I measure to be perfectly reasonable (accurate, even). 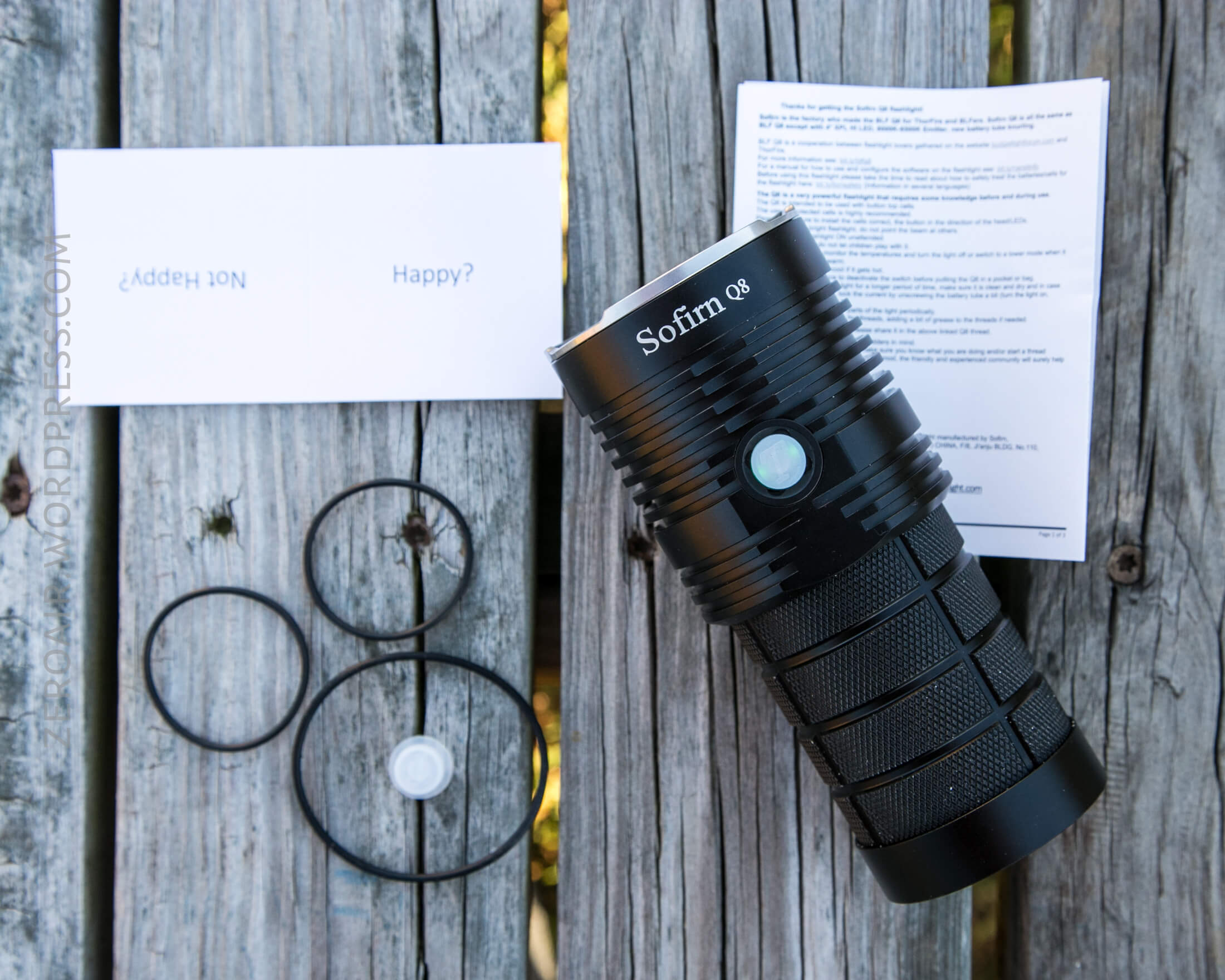 Unusually for Sofirn, this light just ships in a simple cardboard box, with a bar code sticker. 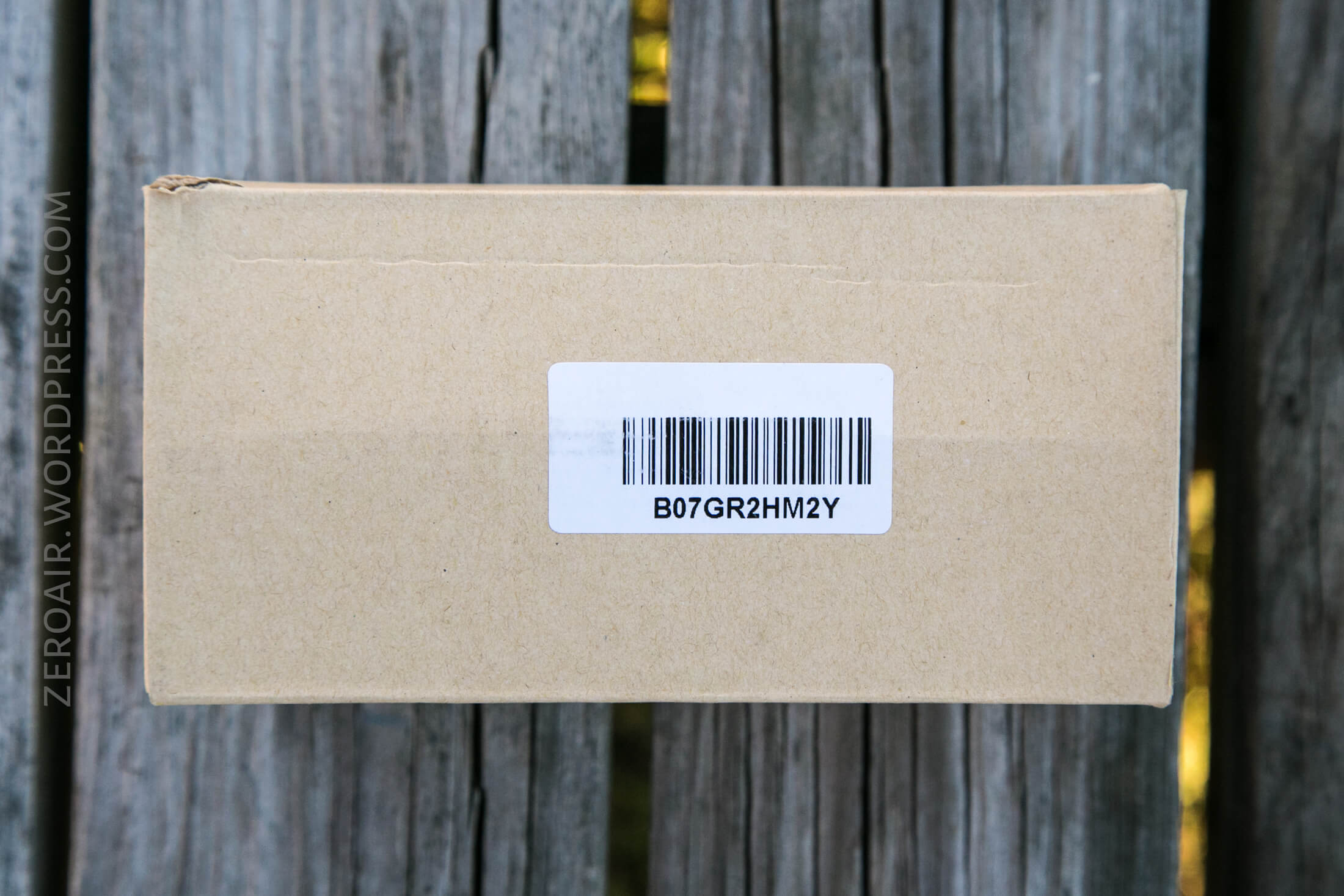 Inside is just some bubble wrap packaging material.  It should be noted that this is the same packaging as the BLF Q8. 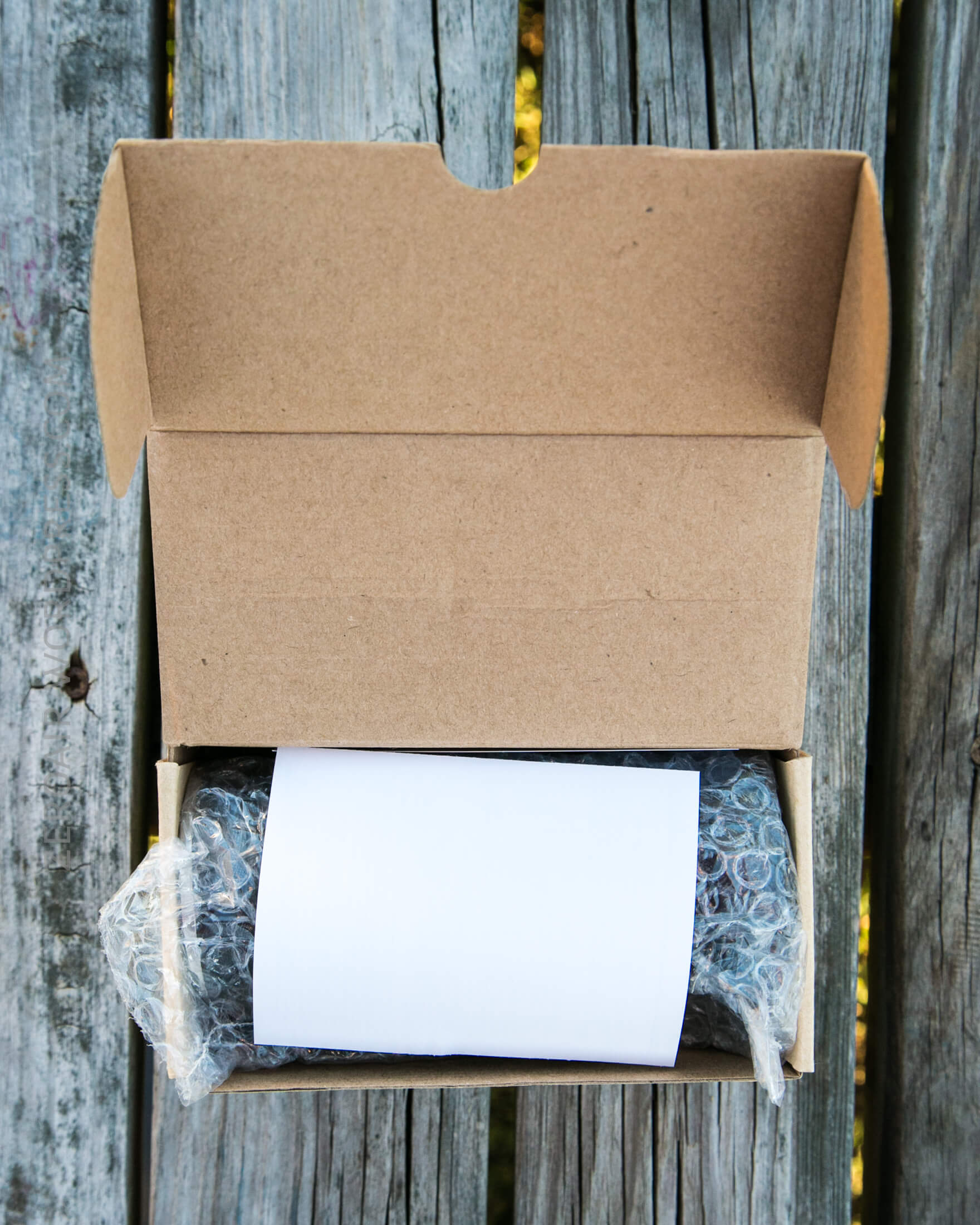 The manual is quite good, but there’s a lot to cover with this UI.  The manual covers that thoroughly.

The build of this light is really great.  It’s an oddly proportioned can light (long head), but very well built.

The build isn’t exactly like the BLF Q8.  The body tube is just a little different (the BLF version had more material removed – this one is all knurling). 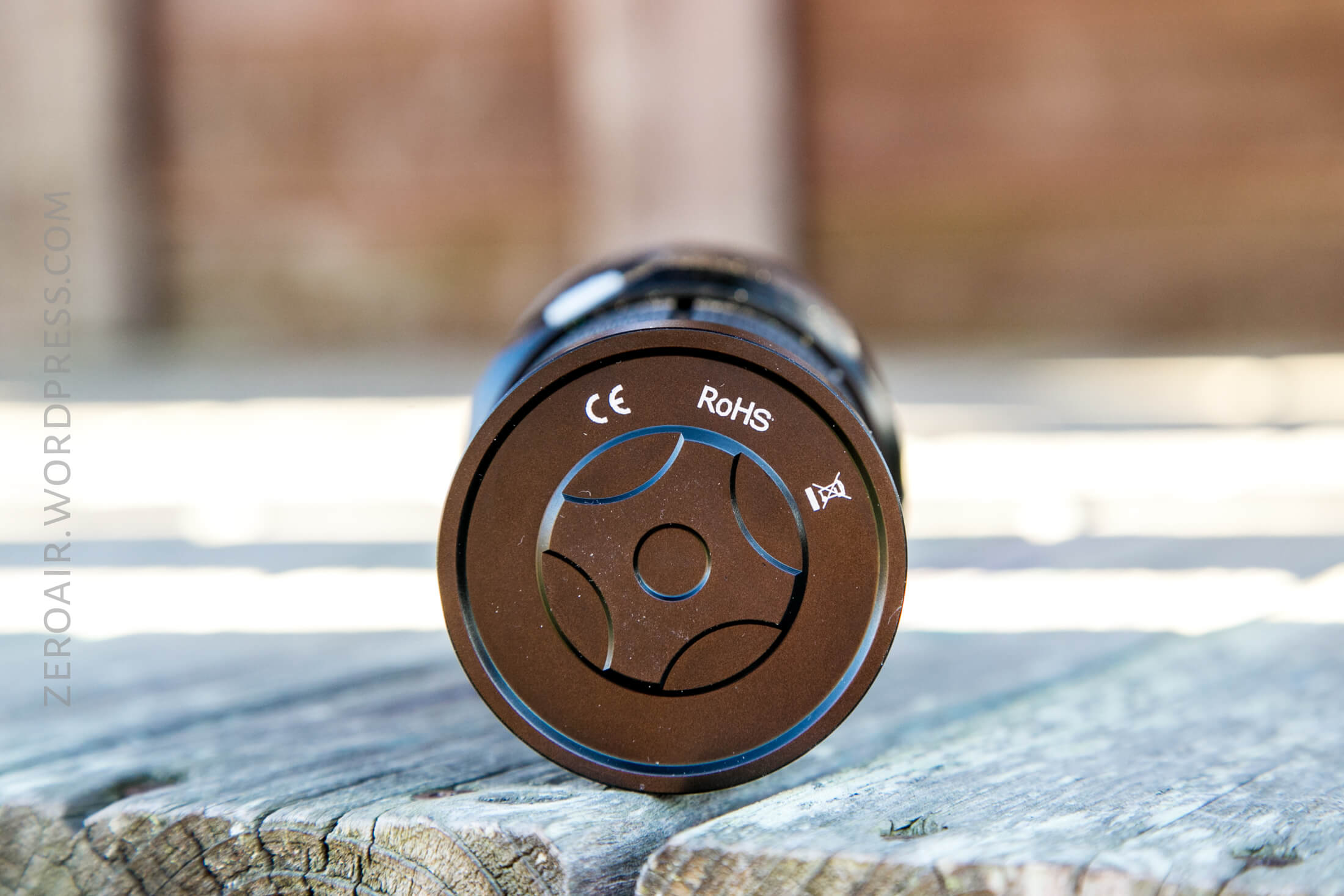 There’s nothing in the tailcap, which unscrews easily.  The tail end of the body tube does have four springs, and all the cells are put into the light in the same orientation.  The head end has nice big brass terminals, and two screws holding things in.

The body tube has square-cut, anodized threads, and is directional. 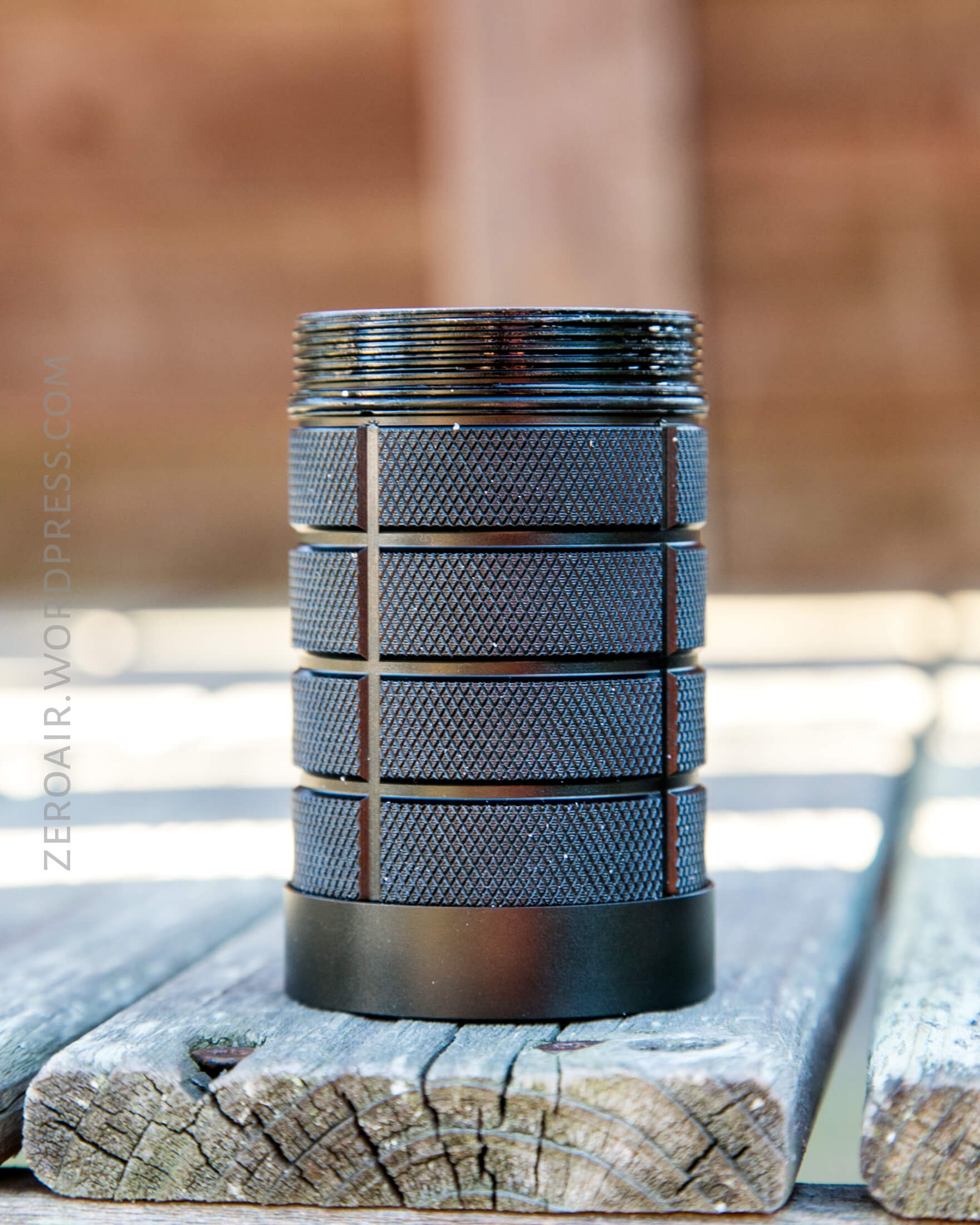 One of the main mods users do is to replace these screws with brass versions for higher current flow.  I have ordered the screws from China twice and never received any.  It wasn’t meant to be. 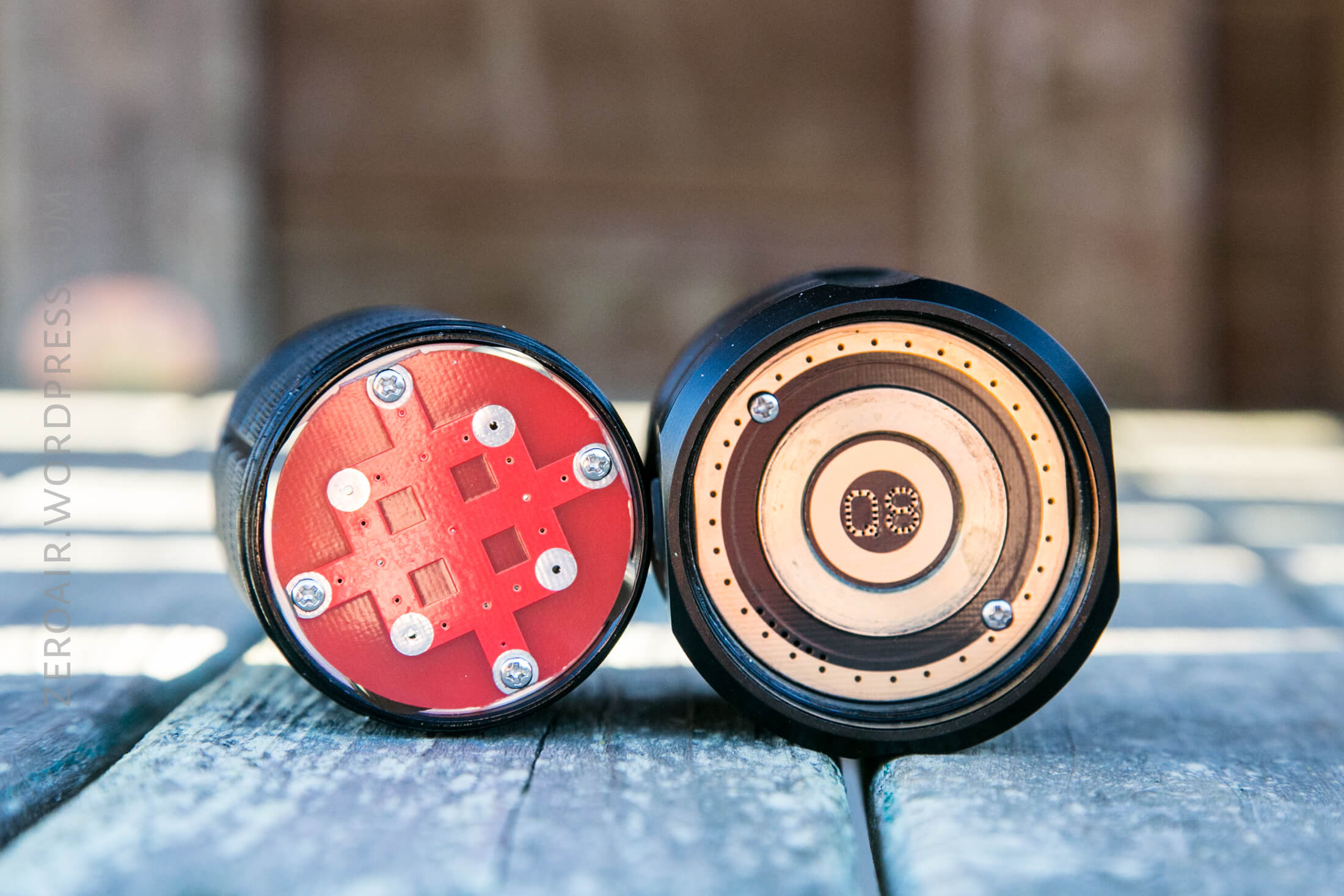 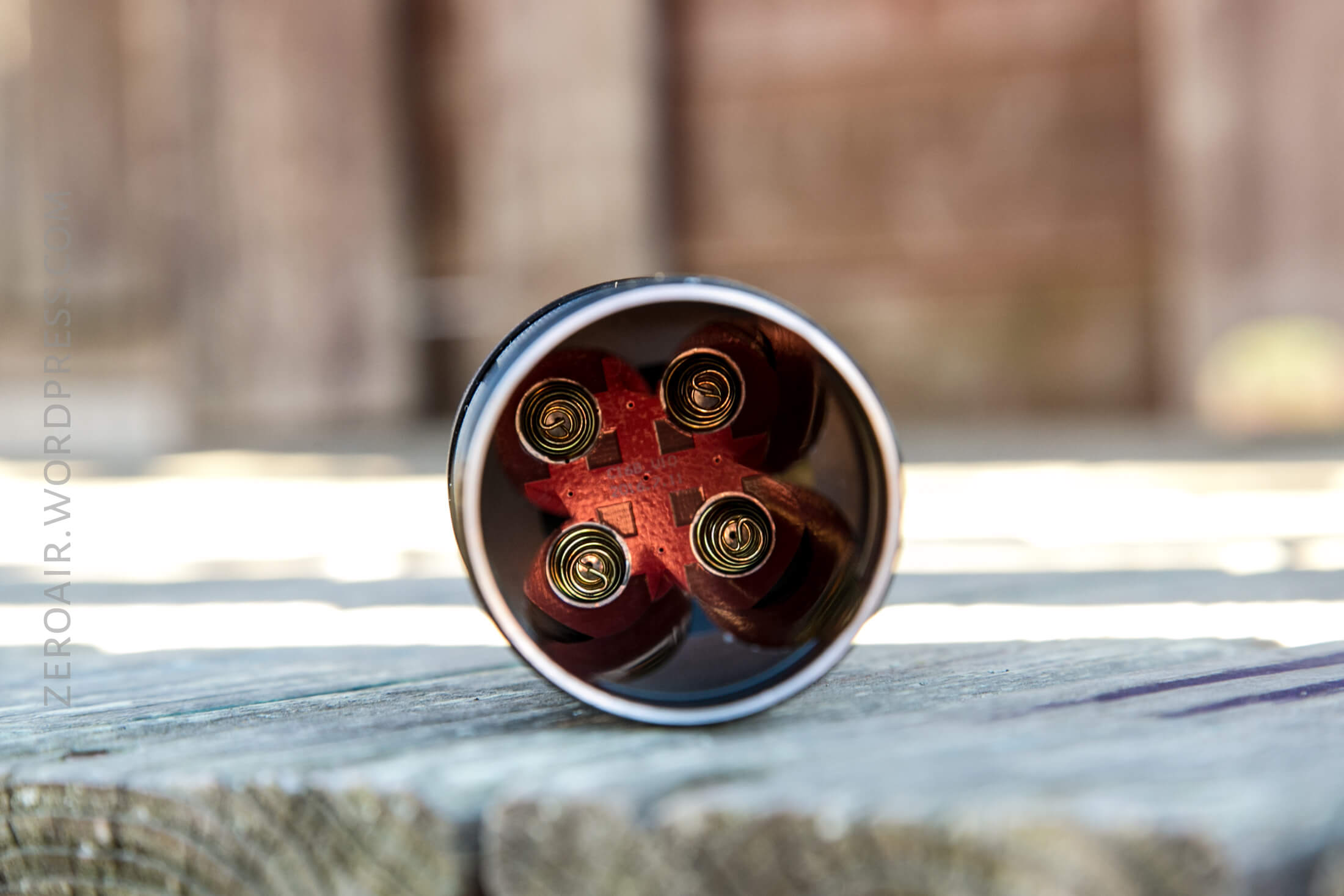 The bezel is easy to unscrew and remove, but the reflector doesn’t fall out very readily. 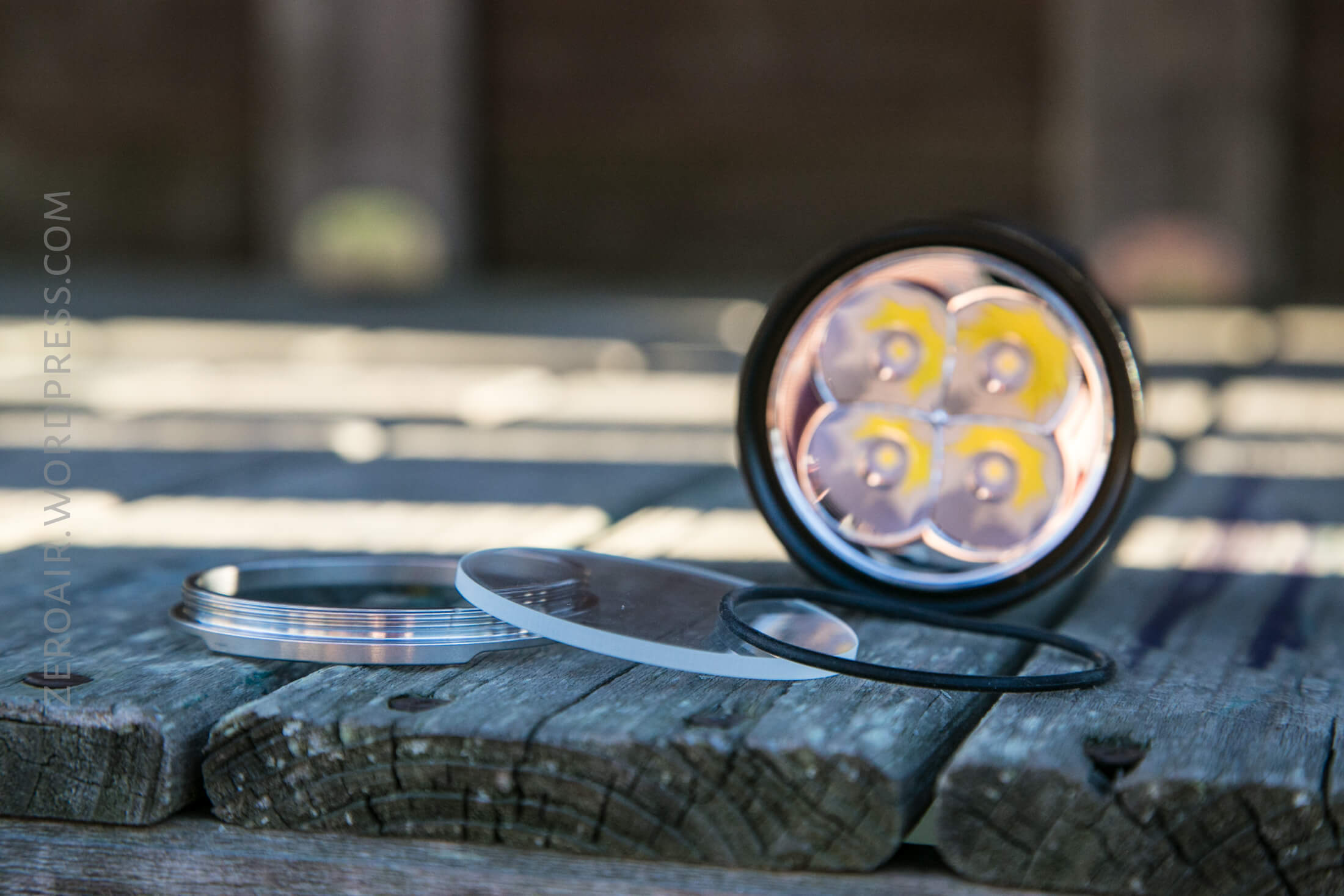 And longer than the Meteor M43 and FireFlies ROT66, as well.

The main means of retaining this light is with the tripod mount on the body/head, opposite the switch.  There is no pouch or pocket clip or lanyard.  A lanyard could be attached via the tripod mount, of course. 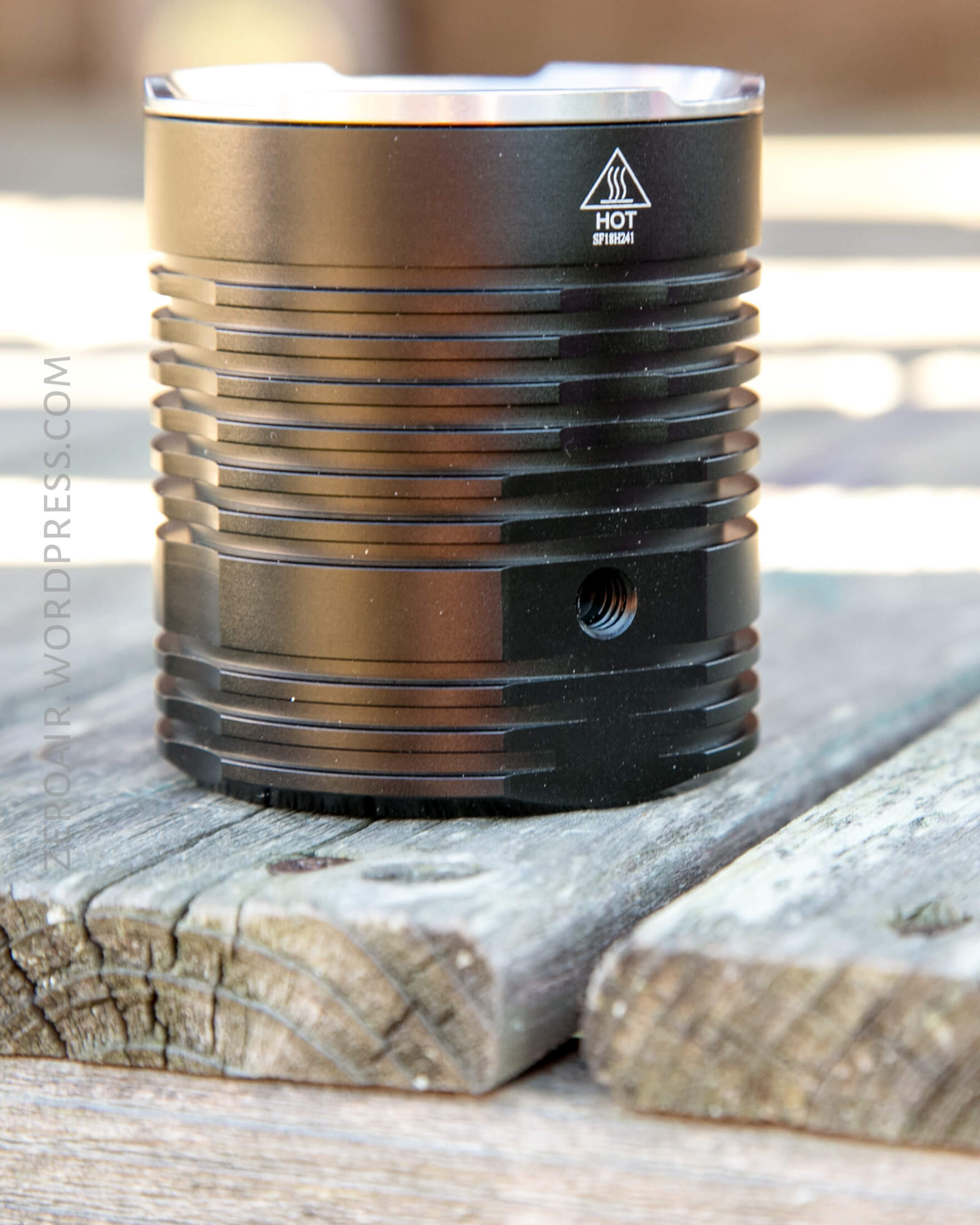 The tripod mount is a nice addition.

Button top cells are required for the BLF Q8.  You also want high drain cells, and as mentioned, you want to keep them married, as a set of 4.  That’s better for the cells and safer for you.

I tested the light with the cells seen below, which are “30Q” cells from Aliexpress.  I haven’t actually tested these cells (thoroughly, anyway) but they seem to be good enough performers.

I said button tops are required, but I did actually use these unprotected 30Q cells – they have enough proudness on the positive terminal to allow good contact. 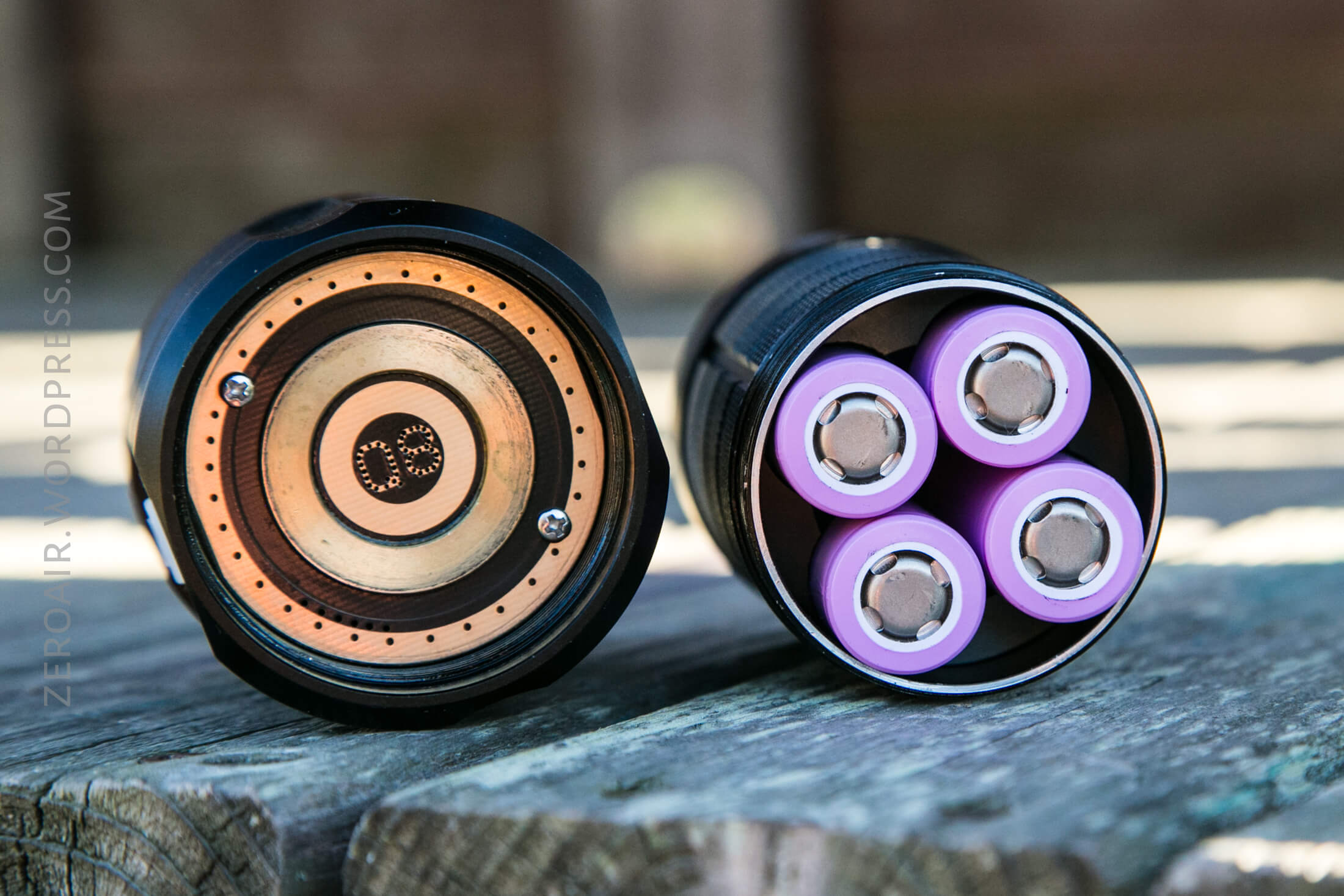 Here’s a runtime profile for Turbo.  I actually reset the light from “Ramping” (which is the default UI) to the discrete Mode setup, because I like that better for testing.  After this test I’ll likely switch it back to ramping.

Turbo output lasts for a short time and appears to be timed.  This profile is exactly like the BLF Q8 profile.  Initial output is at the claimed 5000 lumens, but at 20 seconds I measure down around 4700.  In reality, given possible losses and the like, 4700 at 30 seconds is well into the “5000 is accurate” realm. 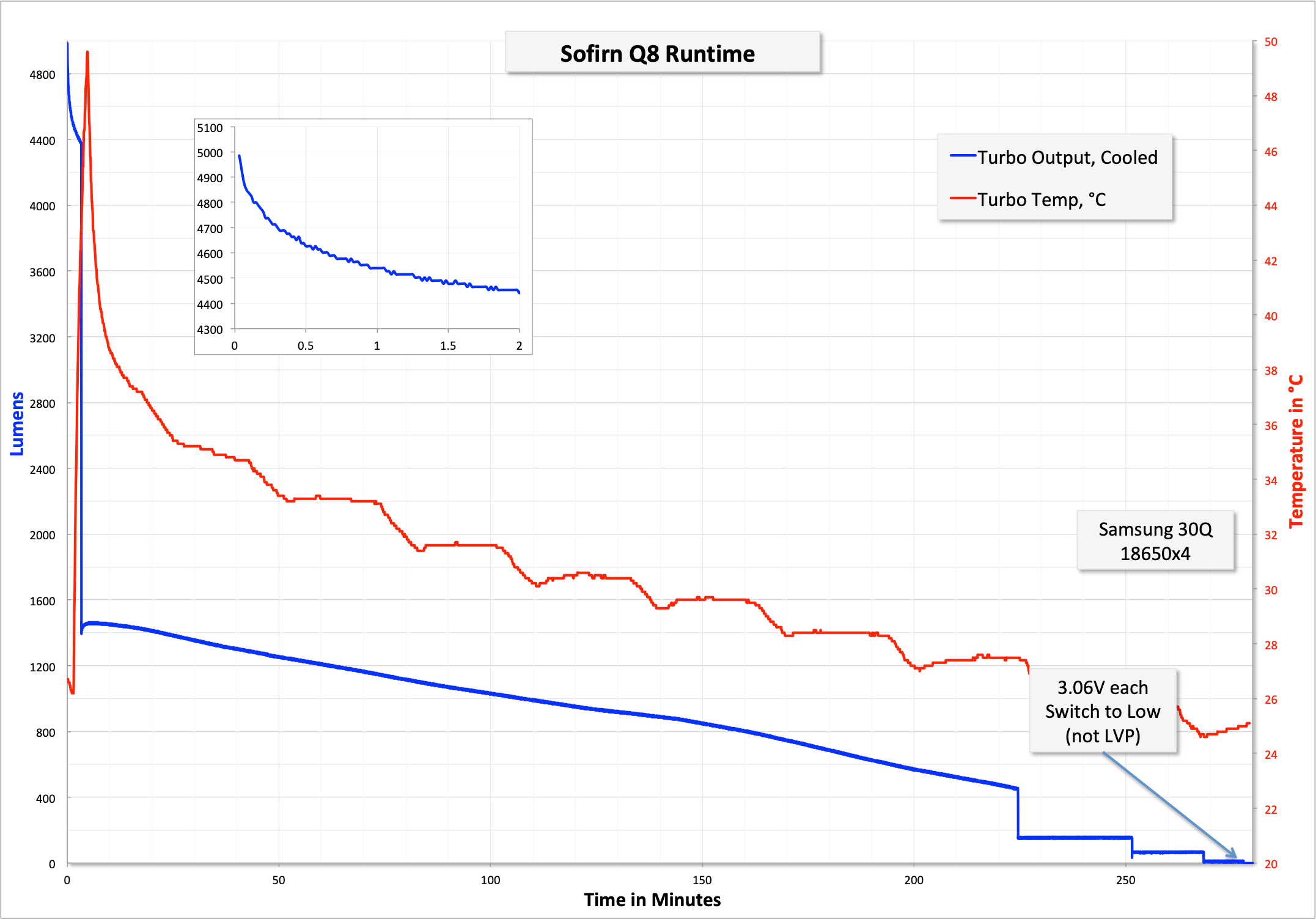 The runtime on “High” (which is the mode below Turbo on the group I’ve selected – the 5 mode group) proceeds exactly as the Turbo runtime, minus the Turbo blip. 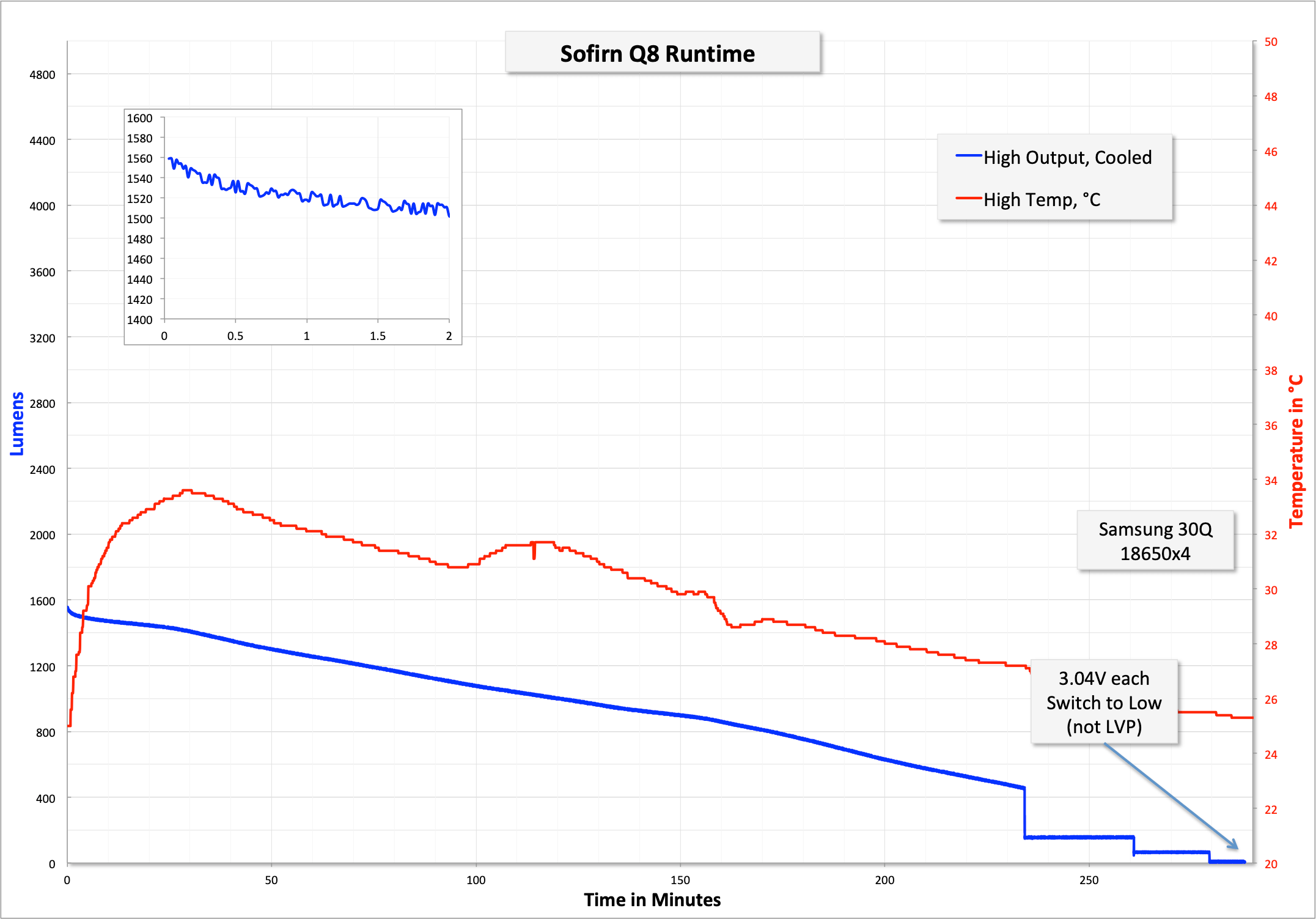 In these runtimes, the output steps way down toward the end of the runtime.  When I stopped both tests, the cells were just over 3.0V.  This firmware has LVP as an option, but I’m not sure what specifically is the default.  (Based on the way I read the manual, it’s on by default, and isn’t one of the optional things:  It should cause a decrease in output (as seen in the runtimes) at around 3V, and shut off at 2.8V).  Regardless, it’s recommended to remove the cells (or break contact, at least).

The Q8 still has NarsilM which makes this a ramping UI.  Ramping is all the rage, and I do like ramping just fine.  This version of ramping is good, too.

In stock configuration, the switch emitters will be green when the light is off. 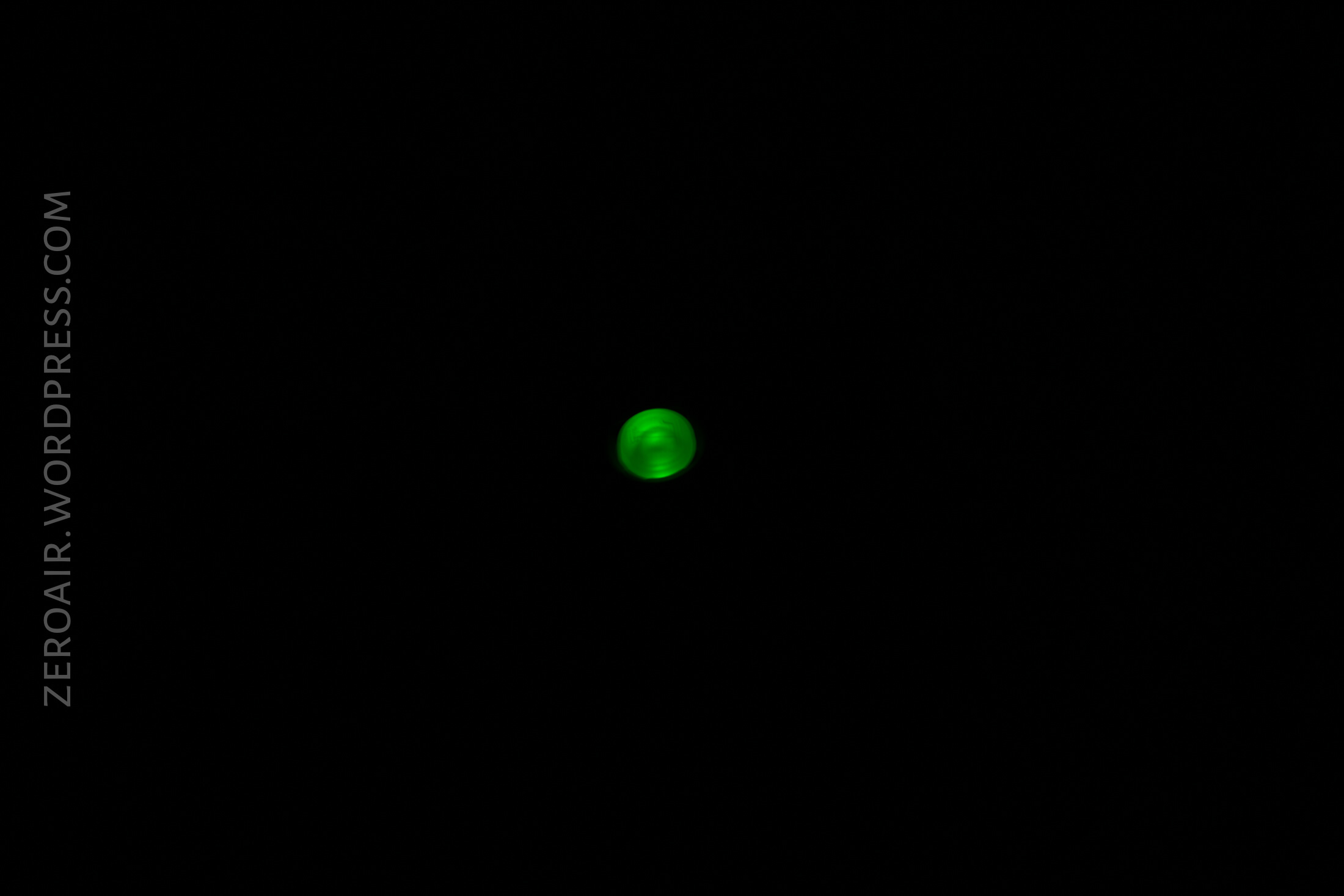 The UI is much too complex for my usual table, and I’m not going to undertake that here.  This Cheat Sheet is not my work! but is very useful, and thorough. 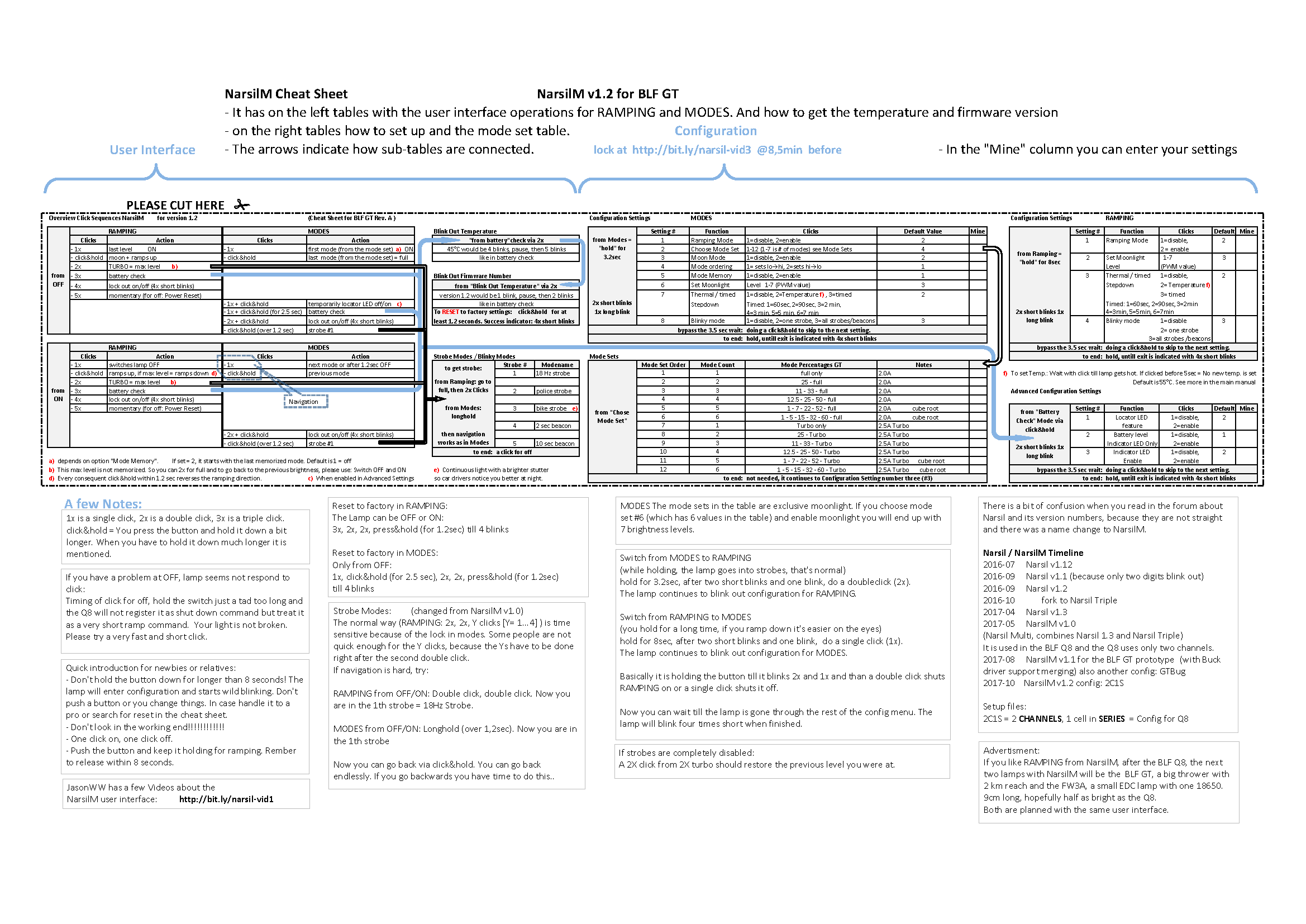 There are two groups.  One group has ramping, one group has discrete modes.  It’s possible to switch between ramping and discrete easily.  The default is ramping, and to switch to modes, first turn the light on, then hold the switch for 3.2s.  It’ll blink twice, pause, and blink once.  At that point, click once.  This disables ramping.  Once this is done, put the light down so you don’t change other settings (which is very easy to do.)  There are other things you could do to expedite termination of programming, but just skip it, and wait.

Narsil is wonderful firmware.  It’s extremely versatile, and possible to change many (most? all?) of the settings about the light.

No usual mode table in this case.  I don’t think it makes sense in a ramping light (even if it does have discrete modes).  I will say that the Turbo mode drew 6A if I allowed it to, but I didn’t go higher.  Basically, this light will probably take whatever your cells will give.  So use quality cells!!

The emitter in this light is a Cree XP-L HI, and it’s 6000-6500K.  There’s a white centering ring, and the reflector is very smooth and fairly deep.

This is a departure from the BLF version.  That version was warmer and also used the HD version of this same emitter.  I like the warmer choice, but I prefer XP-L HI’s too.  So a warmer XP-L HI would be perfect!  The HI emitter also provides a lot of throw, when accompanied by these smooth reflectors.

The available low is very low. 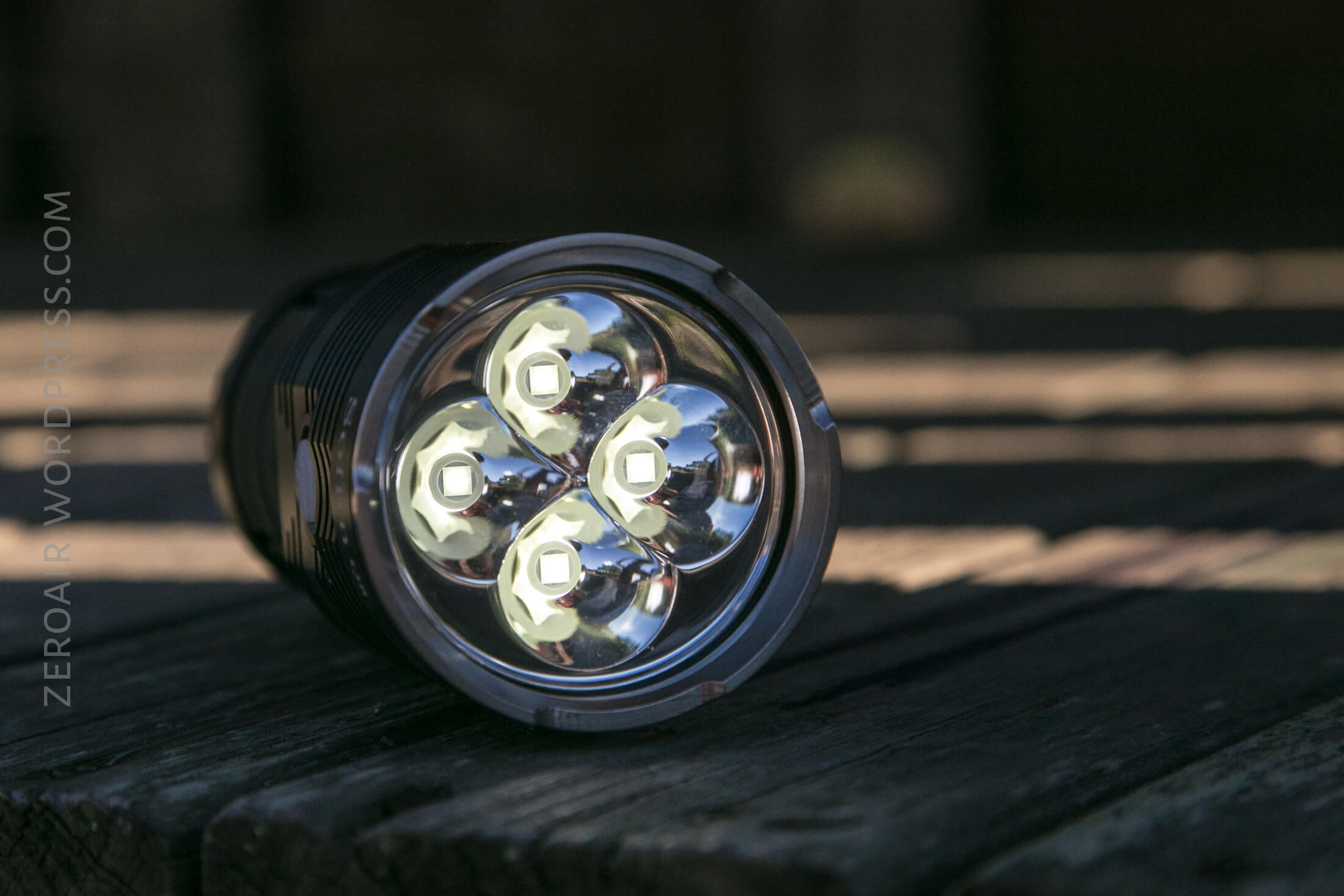 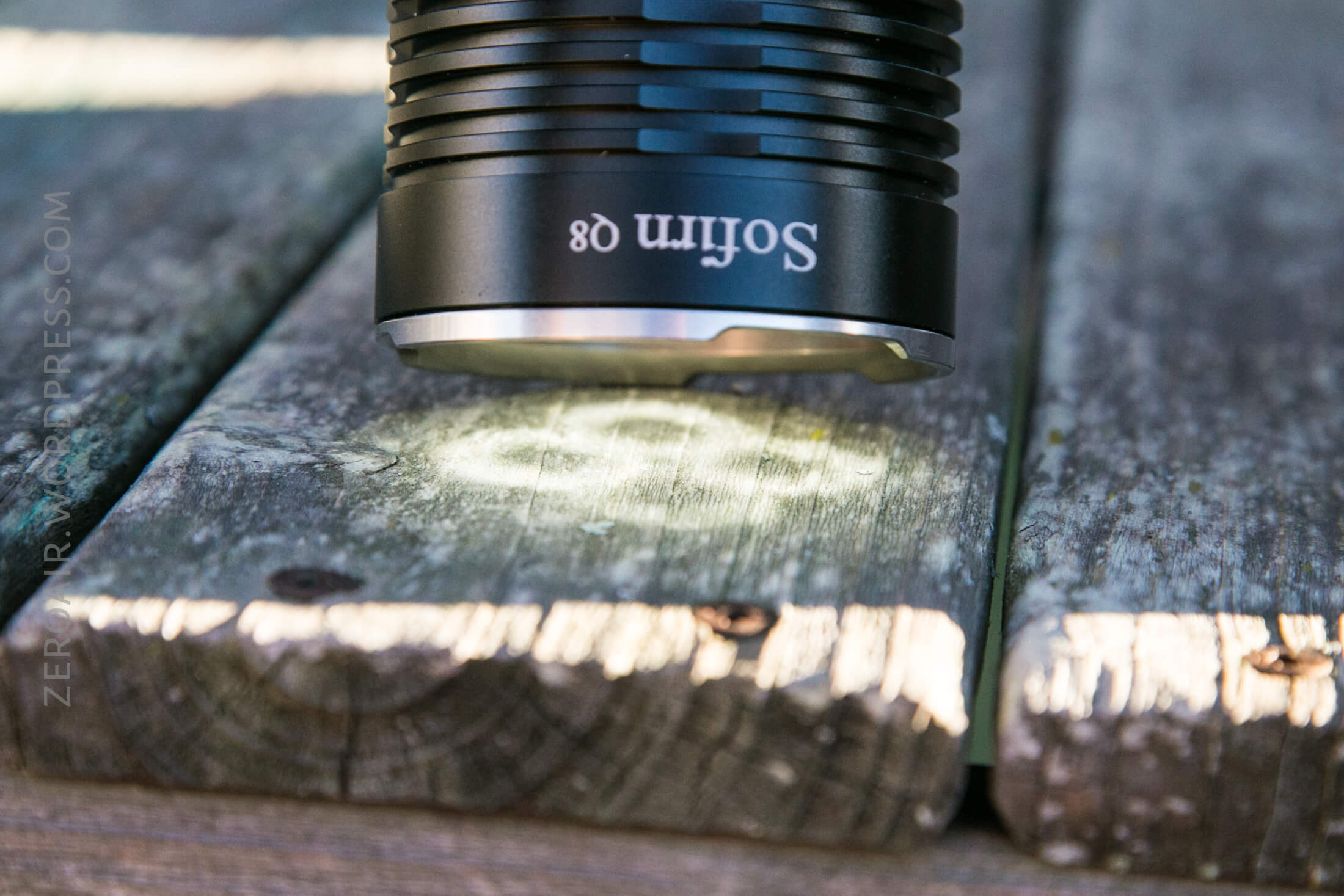 These beamshots are always with the following settings:  f8, ISO100, 0.3s shutter, and manual 5000K exposure.  This is the output on the discrete mode group I selected, which had 6 modes. 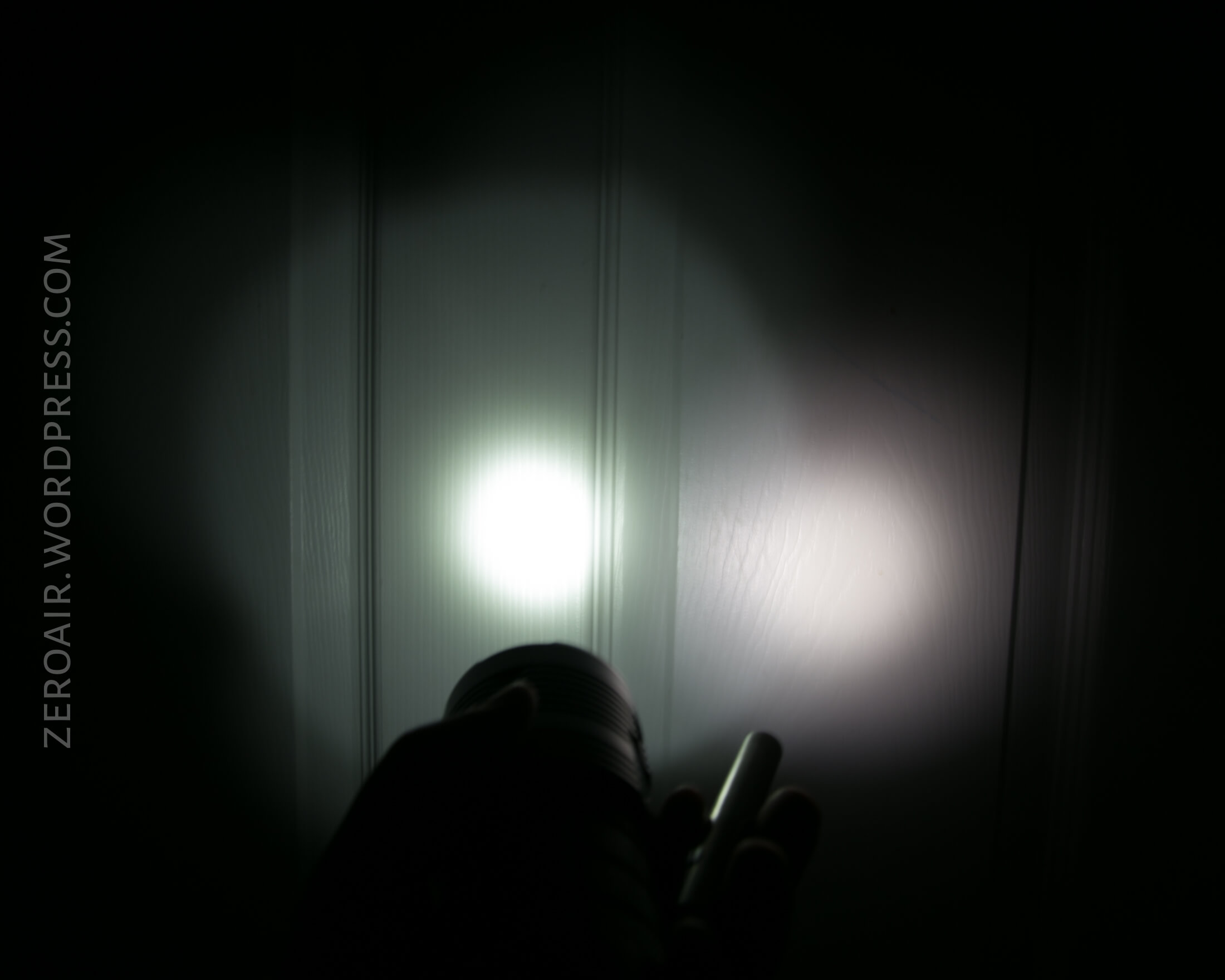 Here’s a relevantly filtered page on parametrek.com.  There are some other options in a similar configuration.  Take the Nitecore TM26GT, for example.  Similar lights, but the output on the Q8 will be much higher.  And though the Nitecore claims more throw, they’re probably actually very similar in real life.

Now this light vs the BLF Q8?  Which to choose?  Well, this light is available now with the coupon I’ve provided for $40 and is a good choice with the stock XP-L HI’s.  However, as a modding base, this light with the new hottest Samsung emitter is a wonderful choice!