Here’s the Astrolux FT03 Luminus SST40 flashlight!  It has USB-C charging and can use a few different cell types.  It’s a nice light; read on!

There’s really only one version of this light, but it’s available with neutral white or cool white emitter.  Both are SST40, though.

Click here to buy the light at BangGood.com!  That’s an affiliate link.  Click it just for the heck of it, even if you aren’t a buyer!

Great size, great throw.  USB-C charging, multiple cell size support… and $32!?  This is a fantastic deal of a light.

^ Standard measurement disclaimer:  I am an amateur flashlight reviewer.  I don’t have $10,000 or even $1,000 worth of testing equipment.  I test output and such in PVC tubes!!  Please consider claims within 10% of what I measure to be perfectly reasonable (accurate, even).

The FT03 ships in a nice Astrolux box, with the light illustration embossed.  A sticker on the end describes the emitter tint, and on the bottom is an SKU sticker.

The manual is pretty and descriptive.  It’s a manual that’s generally been used in other lights since the firmware is one Astrolux uses a lot.  That’s fine… makes for nicely fleshed-out manuals.

It’s impossible to get “clean” shots around here lately.  All this yellow stuff gets on anything black.

The head has very minimal fins for cooling.

The diamond pattern knurling has deep grooves.  So even though there’s minimal knurling, the body is still plenty grippy.

Here’s the light apart.  The cell tube comes completely off the head and tail.

Both the head and the tail have massive double wound springs.

The cell tube is not reversible, because one end (the head end) has unanodized square-cut threads, and the tail end has very lubed trapezoidal threads.

The included cell tube adapter is plastic and only fits around the body of the cell.

It’s not really a small light.

The included lanyard attaches to the tailcap, through two holes.  There’s a relief, which allows flawless tailstanding – a nice touch.

There is no pocket clip or anything else included for carry.

The FT03 has a few options for power.  Primarily, this is a 26650 light.  Or at least, at the maximum, it’s a 26mm in diameter light.  The cell capacity also allows for longer cells, like the 21700 variety.  I opted to use a 21700 cell, and really I’d recommend that for you too.  The reason is that 21700 cells are more easily available in higher drain abilities, and with this being a FET light on Turbo, you’ll benefit from a higher current cell.  I tested this exclusively with a high drain 21700 cell.  The included adapter also allows 18650 use.  Even that might be a better choice than 26650 because most 26650’s I know aren’t really high drain.  But if you need the larger capacity, by all means… 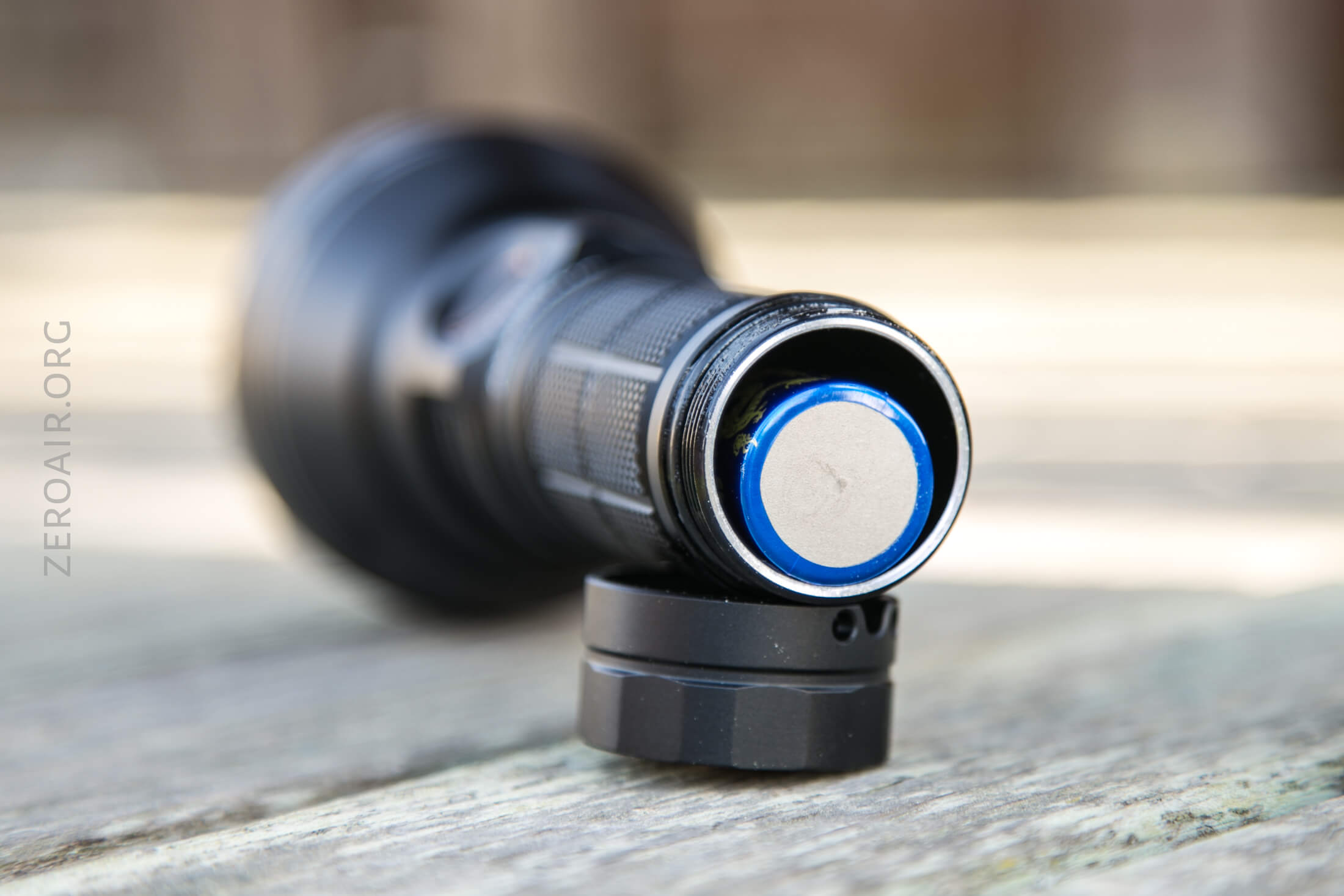 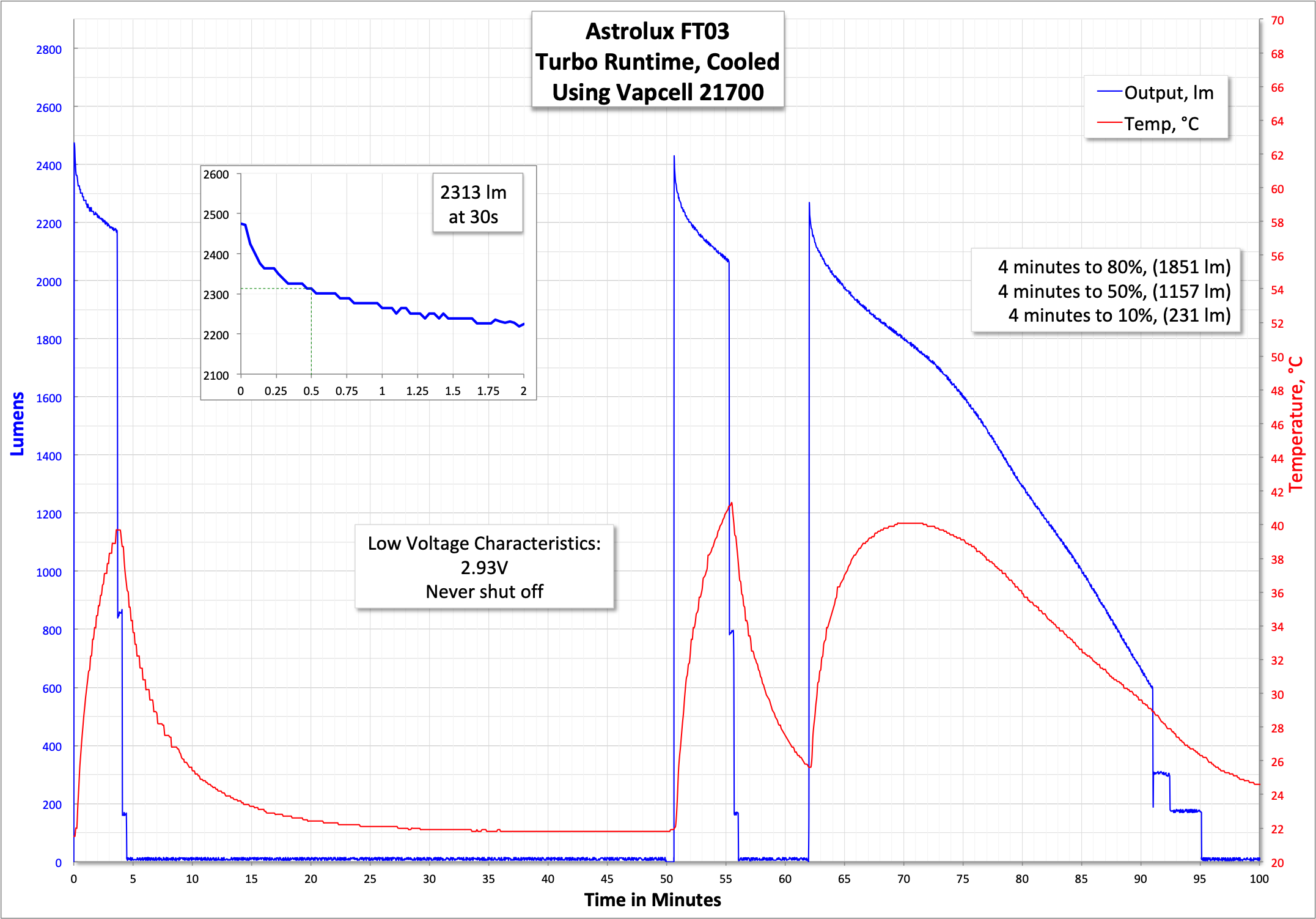 I didn’t really set out to “reset to turbo” multiple times, but the temp-based throttle kicks in so hard that I kept resetting the light for that reason.

The light never really shut off in either test, but did switch to such a low output, to render the light obviously in need of a charge.

The light also has onboard charging.  It’s unusual in that it’s USB-C.  This is a nice addition to lights, and I hope we see much more of it.

One interesting thing about the charging in this light is that if the cell inside is over 4V, the charge circuit can’t initiate charging.  If the cell has been charging since below 4V, then it’ll charge to full, no problems.

Here are the PWM charts for the five discrete modes.  PWM disappears on the middle mode and Turbo.  I don’t consider it “bad” PWM though – I can’t notice it on any mode.

There’s a single indicating side e-switch on the FT03.  It’s a responsive and clicky button.  The FT03 has NarsilM which is a ramping UI.  Ramping is all the rage, and I do like ramping just fine.  The Narsil version of ramping is good, too.  (Narsil also has a stepped option, which is what I generally opt for, at least for testing purposes).  The PWM tests above, for example, are of the stepped modes.

Just like another light with NarsilM I reviewed, the Astrolux S43, I won’t put NarsilM in a table.  I’ll link this awesome flow chart type table, and leave it at that.

There are two groups.  One group has ramping, one group has discrete modes.  It’s possible to switch between ramping and discrete easily.  The default is ramping, and to switch to modes, first turn on the light, then hold the switch for 3.2s.  It’ll blink twice, pause, and blink once.  At that point, click once.  This disables ramping.  Once this is done, put the light down so you don’t change other settings (which is very easy to do.)  There are other things you could do to expedite termination of programming, but just skip it, and wait.

NarsilM is wonderful firmware.  It’s extremely versatile, and possible to change many (most? all?) of the settings about the light.  I still don’t think it’s suited for a table, so I’ll leave the UI at the flow chart above, for now.

Again, here are the two manuals.  They’re worth reading since there are some differences from “normal” Narsil.  (These links are for the S43, but are .pdfs, unlike the .docx on the FT03 page.  I prefer the .pdf files.)

Interestingly the FT03, like the S43, seems to always have a Moon mode activated.  So selecting a discrete mode group set can be confusing, since, when picking the default stepped group, which is 4 modes, you get 5 (since moon is always added).  It’s a little confusing.

The switch does have some indicating functions, too.

In this light is a Luminus SST40-w.  The reflector is very smooth and quite flawless, and the emitter has a white centering ring.

The light is available in both CW and NW options.  I have the CW, which should be fairly obvious from the photos below.  (Again, this is the default discrete mode option).