I reached out to Nicron recently and they sent over a few lights – including this Nicron H15 headlamp!  This is a dual emitter headlamp – read on!

Sorry!  I can’t find any official pages for this headlamp yet.

There is only one version of the Nicron H15 headlamp.  A similar but bigger light is the Nicron H25.

I quite like this little headlamp.  The Nicron H15 is a dedicated headlamp (ie not really for “right angle” uses), but the dual emitter setup works well.  The user interface is good, but I could stand to have an added (lower) mode.  Also, I would prefer high CRI emitters, and not the cool (and very cool) choices seen here.  Finally, the PWM is bad. 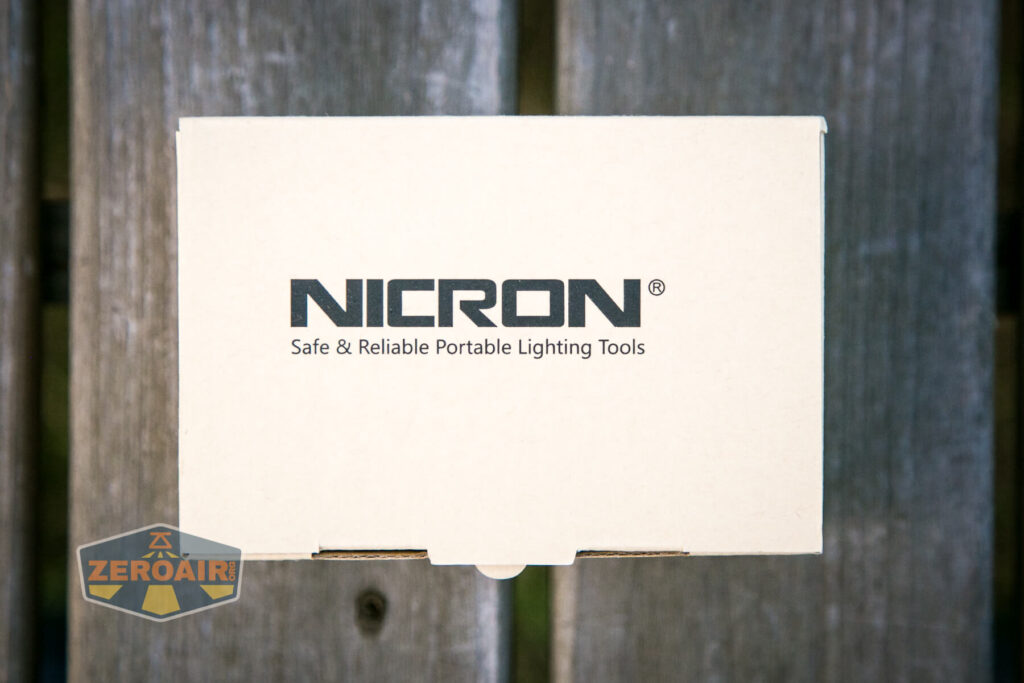 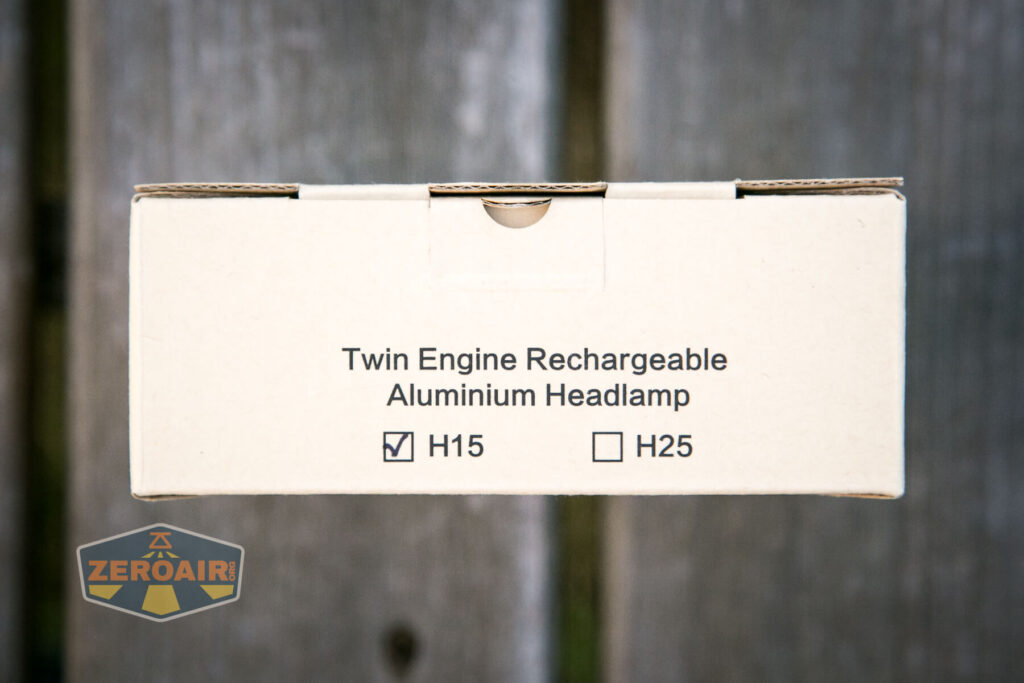 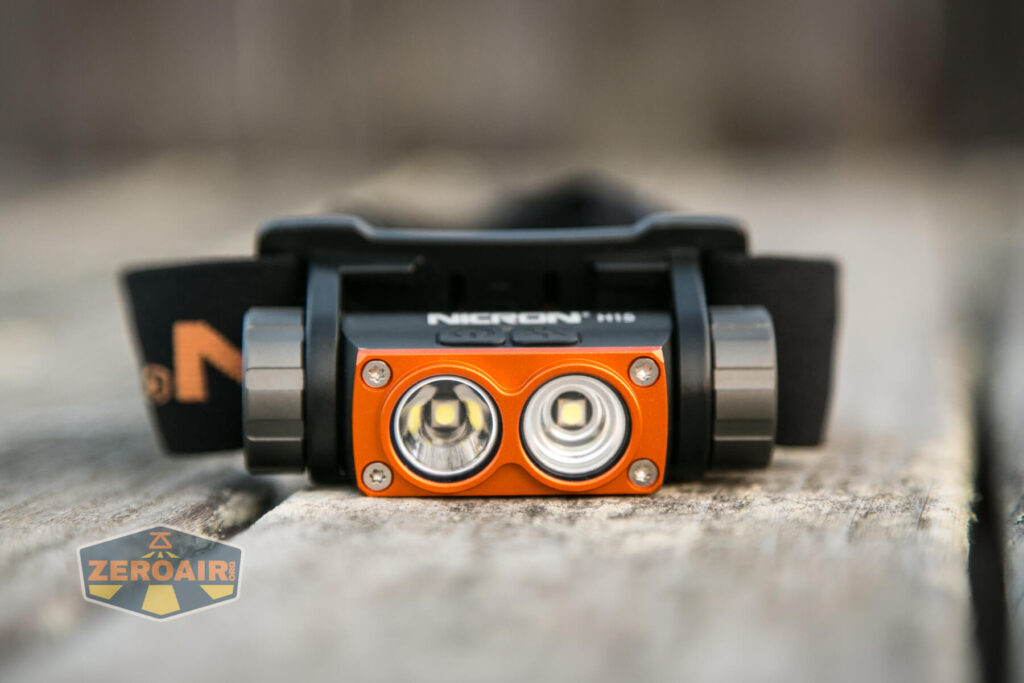 The Nicron H15 headlamp has a nice build quality, and with the cell included, packs a good value (that is, if the price is around the same as the H25.)

It’s a designated headlamp though, so there’s no real pocket-carry opportunity.  Not a huge deal.

The “open” side is labeled.  This is the left-hand side when the light is on your head with the switches on the top. 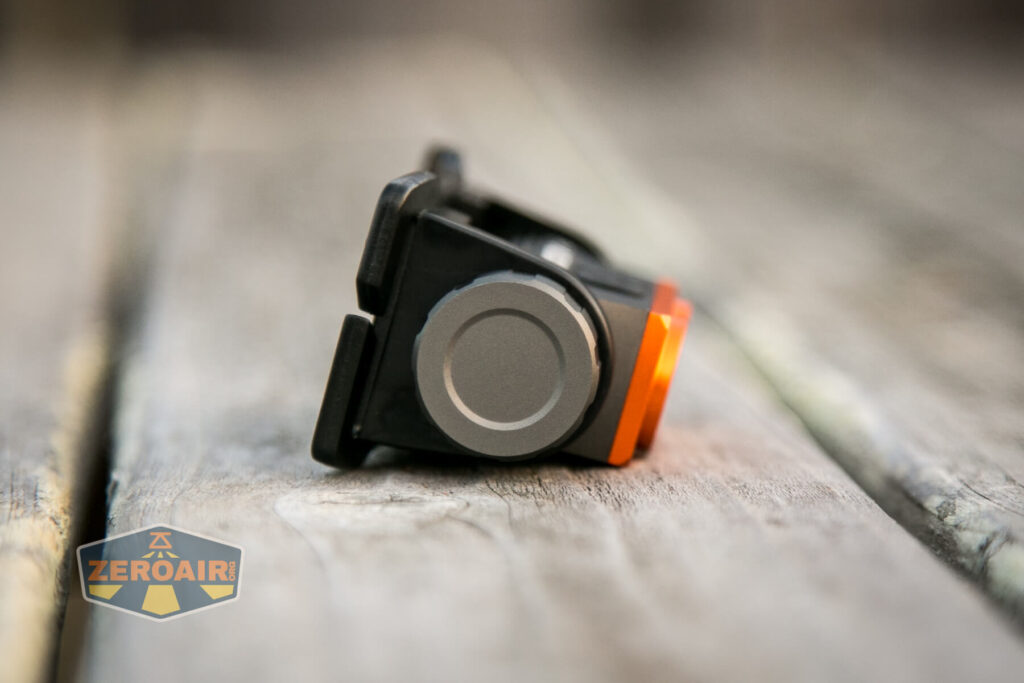 Only one cap is removable, and the threads on this end are short.  They’re also anodized and minimally-to-appropriately lubed. 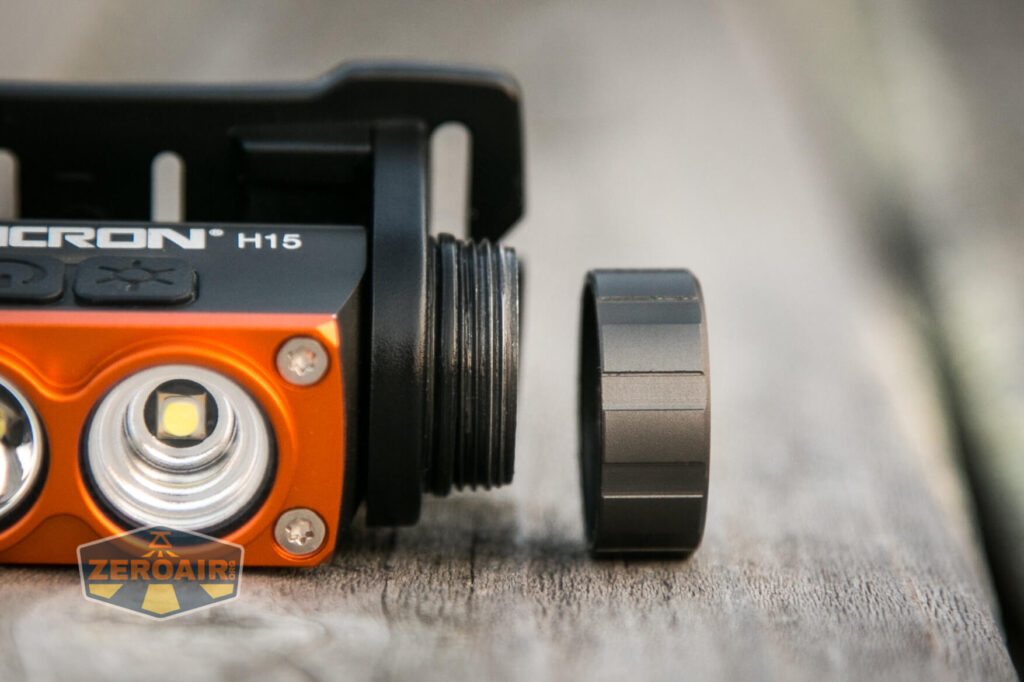 Unlike the H25, the Nicron H15 headlamp has springs on both ends.  Sorry for no picture in the cell tube!

Officially 65mm x 37mm x 35mm, and 58.5g (excluding cell and headband).  The plastic backing isn’t removable, so that weight does include the plastic. 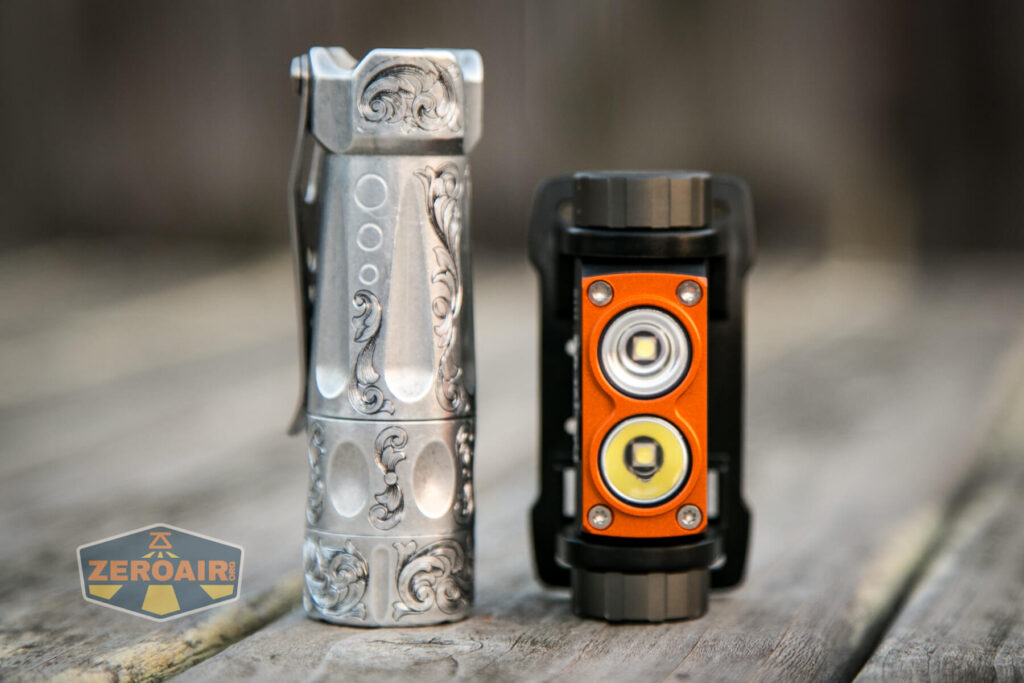 I said Nicron sent a few lights.  They sent this H15, but they also sent an H25, which you can see below.  These lights are very similar in look.  And they do both have dual emitters.  But the user interface is slightly different, the emitters are different, and of course the cell used is different.  Between the two I’d call the H15 a better choice, simply because it will also run on 1.5V cells!

As I said, this is only a headlamp.  As such, the light comes attached to a headband. 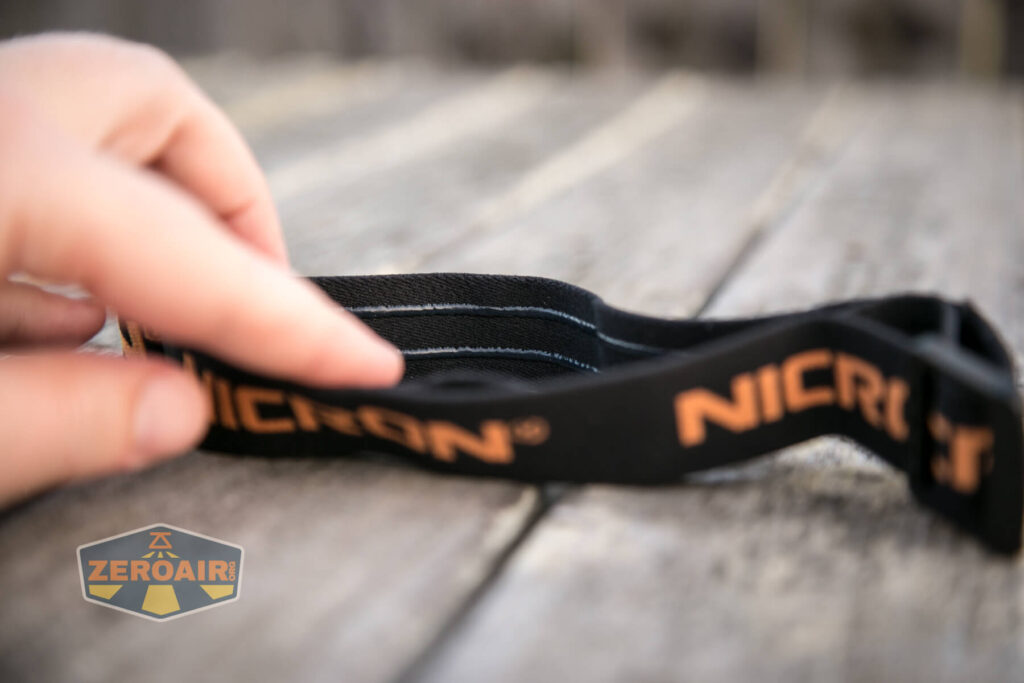 The band itself is easily removable – you can see the gaps in the plastic piece above.  The band also has two silicone grippers and is overall very nice.

Unlike the H25, there’s no top plastic piece for an over-the-top headband, but this light sits so nicely and is so small that you’re unlikely to want or need that.

Nicron provides the appropriate cell with the H15.  It’s a 14500 lithium-ion cell.  The H15 headlamp will also operate (at lower output) on 1.5V cells.  That is, primary alkaline and NiMH cells (like Eneloops) work just great!

The included cell is a standard button top.

Either type of cell is installed the same way – positive terminal into the headlamp. 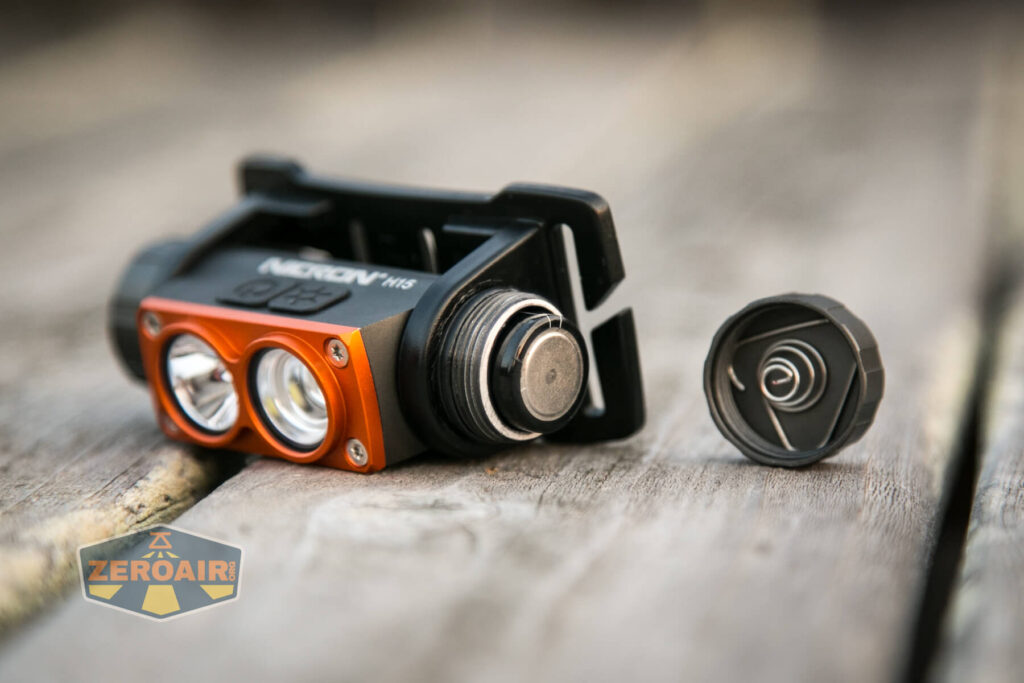 With two emitters you’d probably expect a bunch of runtimes.  And I do have a few for you.  The two switches and two emitters can be seen as two independent lights.  Both can be on any level at any time without respect to what the other is doing.  So that leaves many possibilities of runtimes.

I tested mostly the highest option of each individual setting and cell, and threw in a Medium run too. 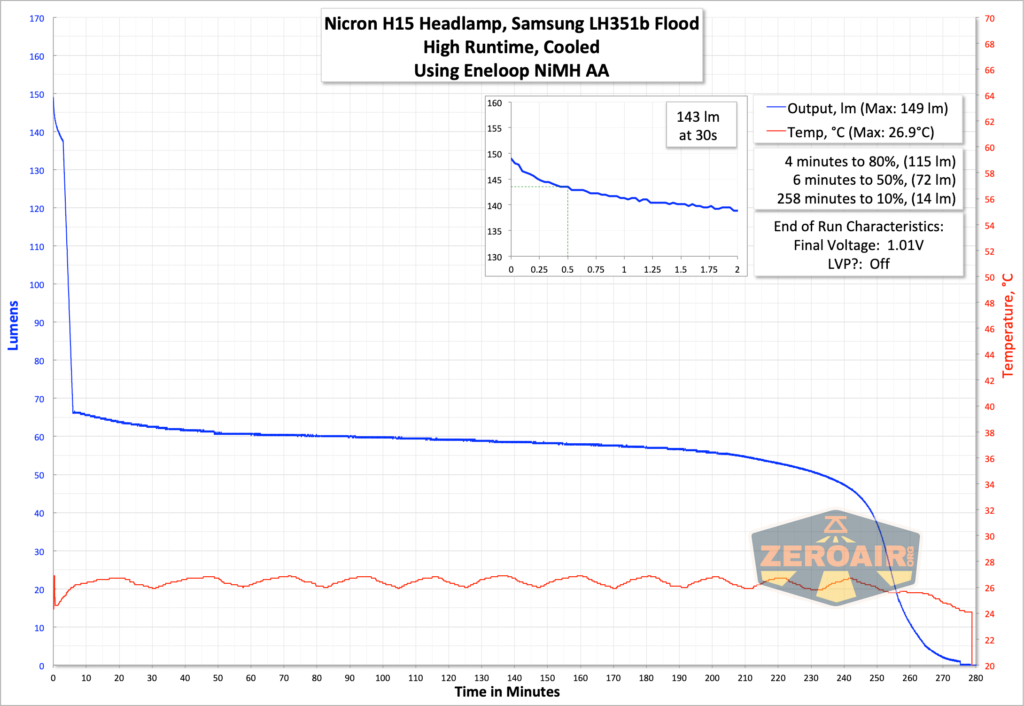 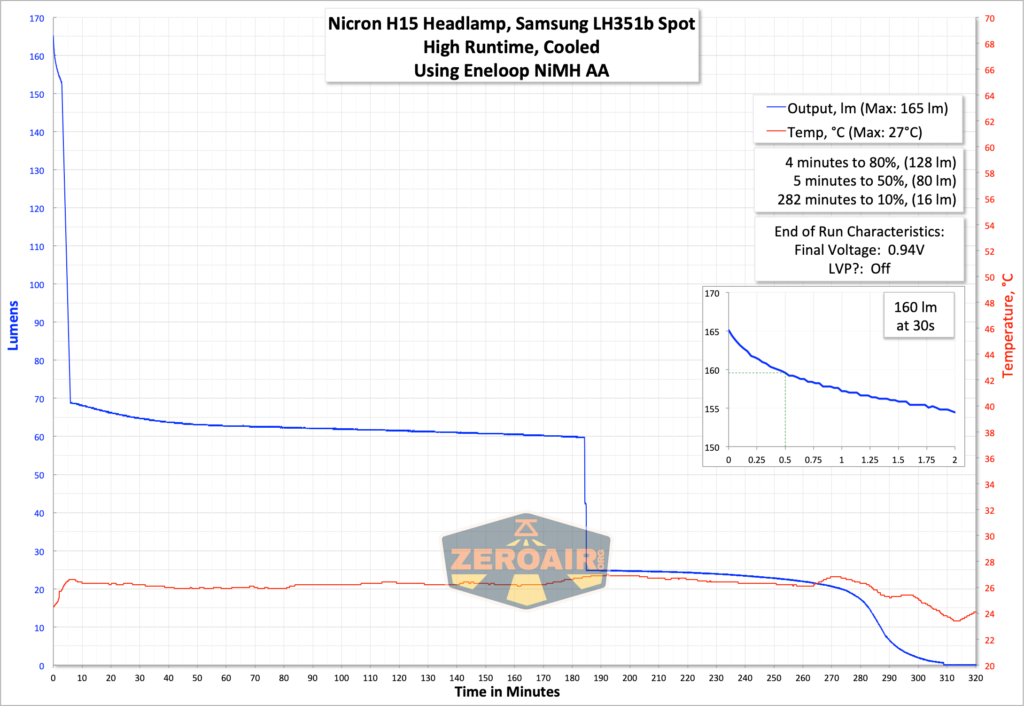 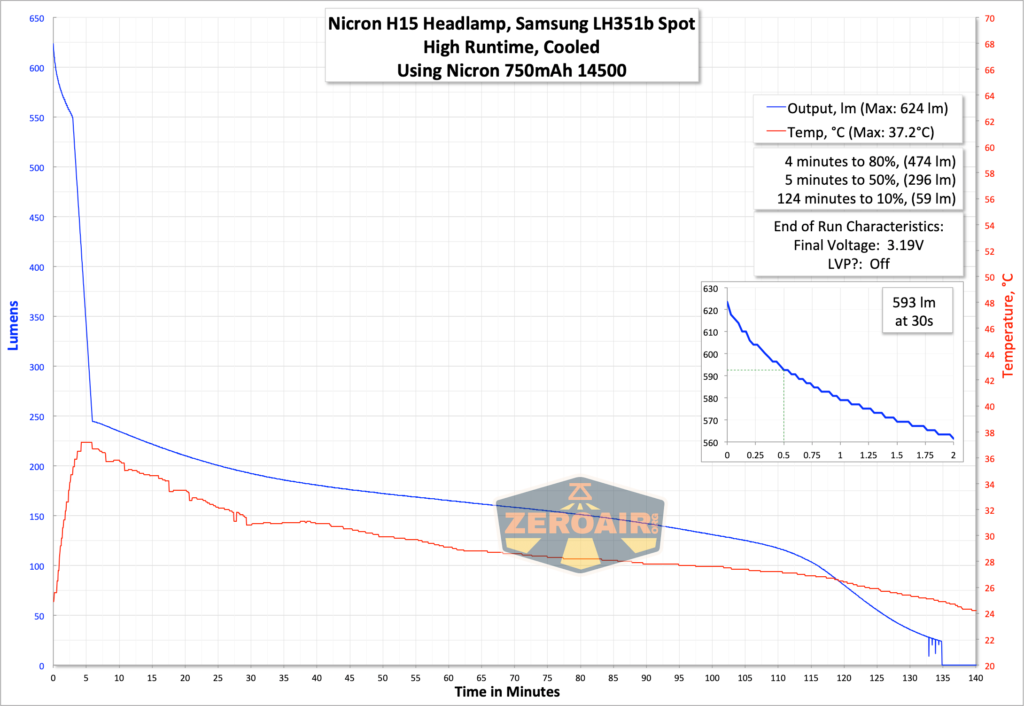 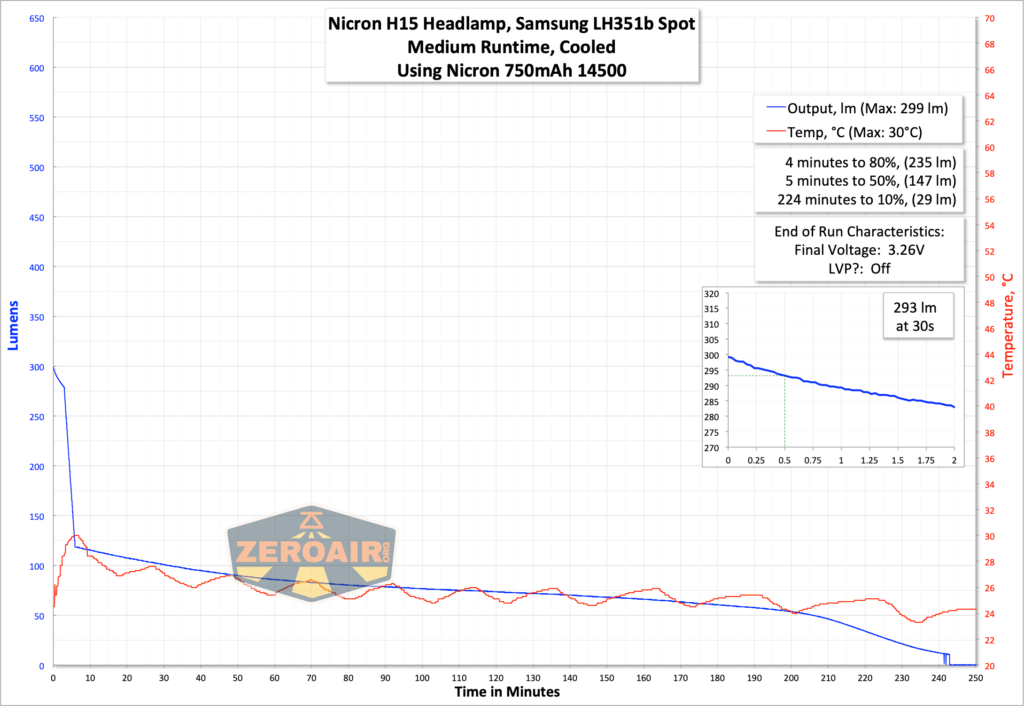 The Nicron H15 headlamp itself doesn’t have onboard charging, but the included cell does.  The cell has a micro-USB port in the positive end. 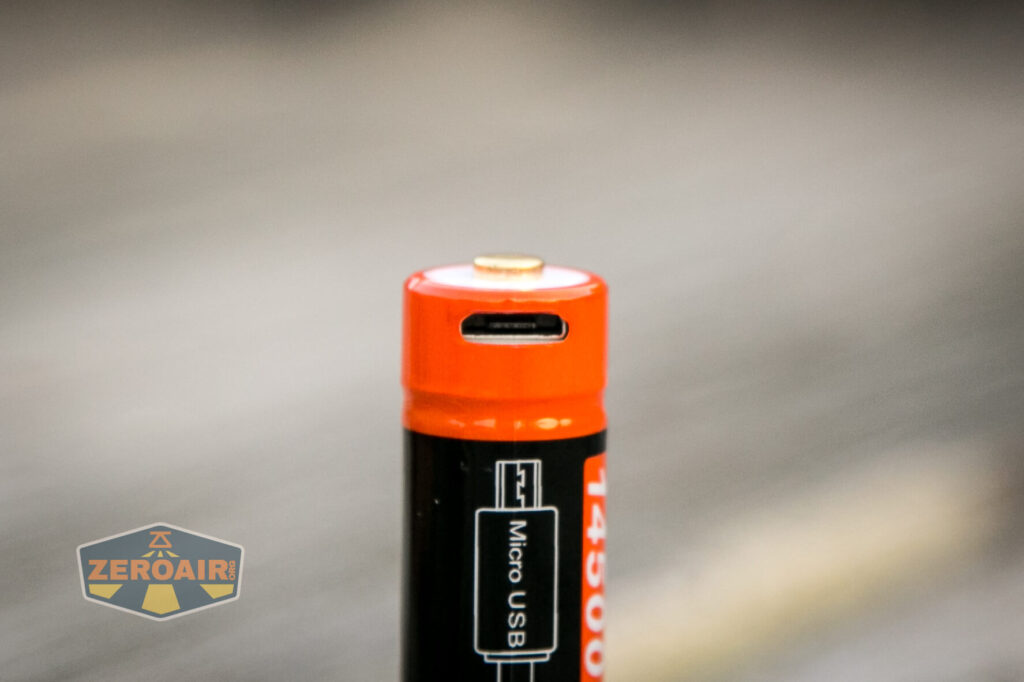 Also included is a charge cable – USB to micro-USB.

While charging, an emitter on the positive terminal of the cell lights red.  When charging is complete, a green emitter turns on.  Here’s a charge graph with a couple of tests. Charging looks fine.

My biggest gripe with the H15 is the PWM.  The default mode order is Highest to lowest, which is how the graphs below are presented.  Every mode has PWM, and on the lower modes, it is absolutely visible. 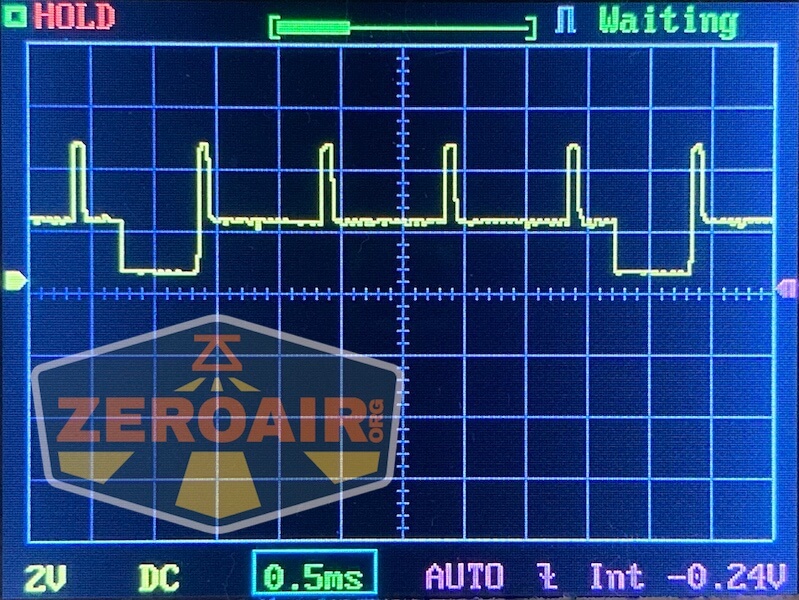 Two switches are used for the operation of the Nicron H15 headlamp.  One’s a power switch (and has a power symbol, and Nicron calls this one “Switch A”) and the other one controls the floodlight and is called “Switch B.”) 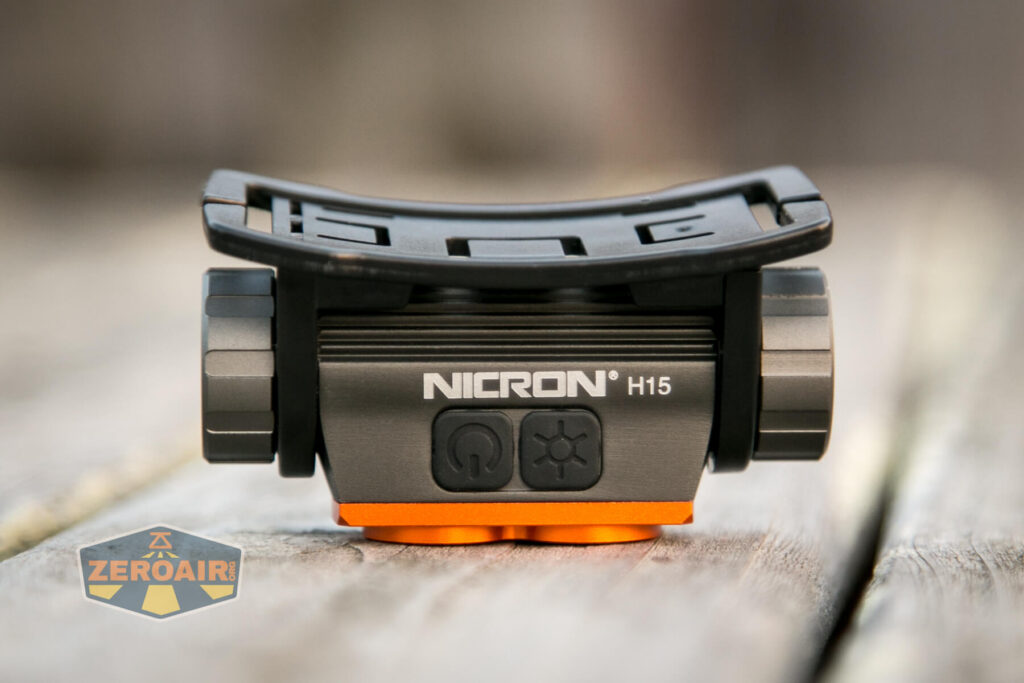 These are very low action, low profile e-switches.  I like them quite a bit.  They’re big enough to get on easily, but they’re sleek enough that you’re very unlikely to click them accidentally.

Here’s a UI table!  Remember that the switches each completely control their respective emitters.  Almost everything that goes for one emitter goes for both (with two exceptions.)  Unlike the H25, I don’t believe the mode order can be swapped from HML to LMH (another gripe).

^ Technically the manual graphic indicates “holding both” would go to Turbo (both emitters on highest), but in reality I found it to require separate actions – click one emitter to the highest output, then click the other to the highest output (per the required steps in the table above.)  Holding both to get to turbo would be the ideal option, though.  This brings up the point that the graphic in the manual isn’t completely clear.

It is possible to have not only both white emitters on at one time but also Spot and Red on at the same time.  (The limitation of “Spot” and red (and no Flood) is probably because the flood switch controls red too – can’t control both at once with the same switch.

Aside from the bug in my user interface that caused the floodlight to go off on its own after exactly 1 minute (which if written as a feature might not be the worst feature ever!), there was also quite a few instances where clicking (not holding) Switch B didn’t go to red, but to the flood modes.  I can’t explain it, and I’m eagerly awaiting Nicron to explain it, too.  I’m interested to see if the H15 has this as well (and will know soon enough.)

Nicron utilizes two of what I take to be the same emitters in the H15.  These are Samsung emitters, but Nicron doesn’t state which ones specifically.  They’re almost certainly LH351b but are very much “on the cooler side.” 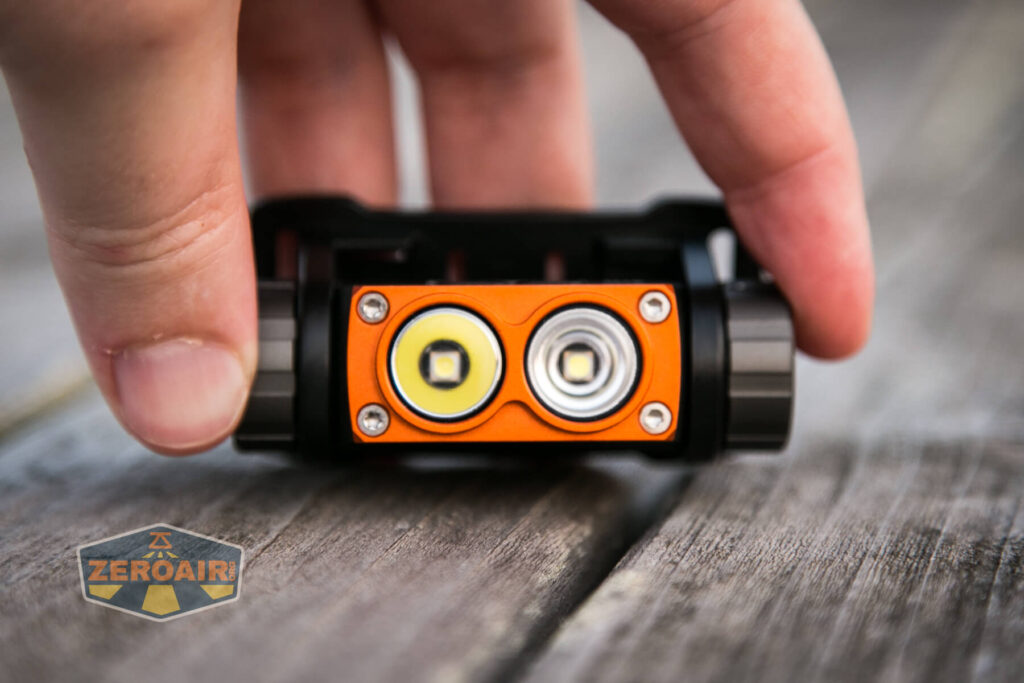 The emitters may be the same, but the reflectors are not – one (the spot) has a smooth reflector, and the other (the flood) has a wavy reflector.

Note that, unlike the H25, the H15 headlamp does not have a secondary emitter.  The H25 has a red emitter.

AA Both (at equivalent levels):

AA Both (at equivalent levels):