The Amutorch AL2 is a “wall of light” flashlight – these three Cree XP-L HI emitters are set up for complete flood output. Read on!

Here’s a link to the ​Amutorch AL2 flashlight​ product page.

I love the idea of the Amutorch AL2 flashlight.  It’s also well built, and quite capable. I find that the output is not just lower than it should be, but also as a completely floody light, seems even lower than that.  The stepdown from Turbo is dramatic too. The charger doesn’t seem to terminate at 4.2V, either – my cell went up to 4.3V. So there are things to watch for on the AL2. 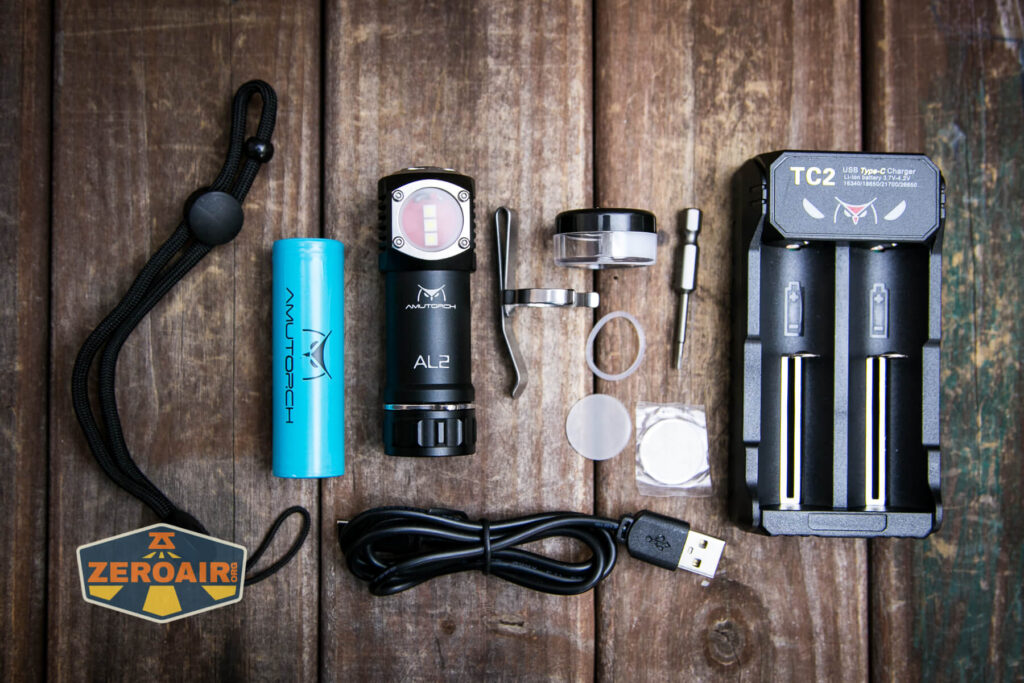 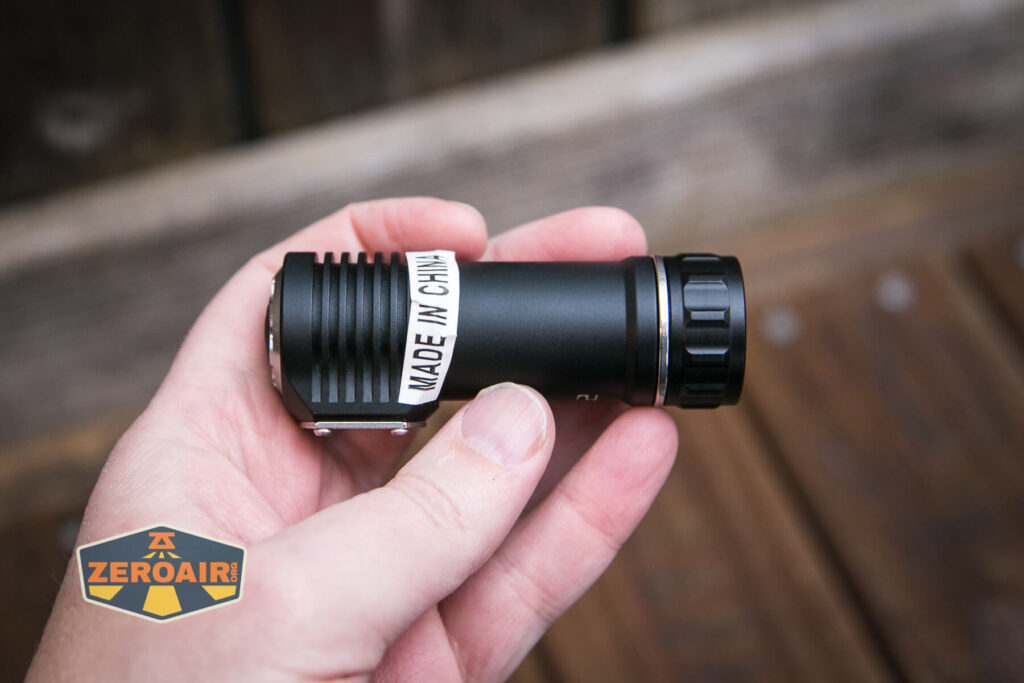 My package did not include a manual. 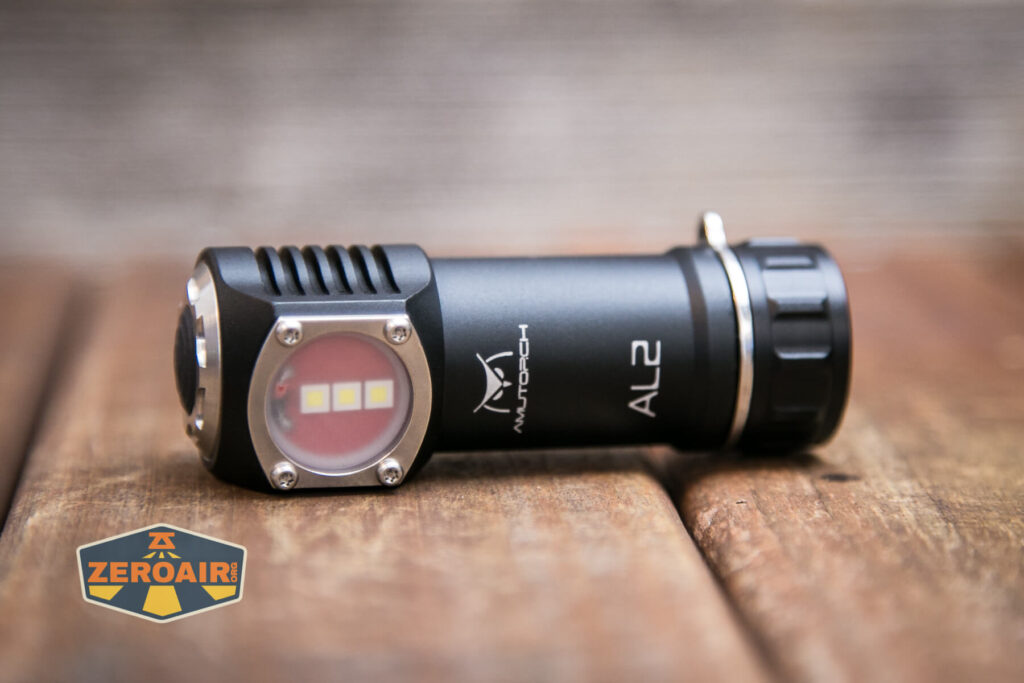 The build quality here is good.  There’s nothing bad to mention.  Notably, the size (for being a 21700 cell light) is very small.  The light itself is really not much larger than the 21700 inside!

This is a minor quibble that I’m sure others will notice too.  The three emitters are in a line, and that line is off-axis with the body. It seems like those should line up but functionally there’s actually no point at all in them being aligned with the body in any way.

The overall look of this light will probably be familiar – it’s very much in the same style as the Amutorch E3S.

The tailcap has a magnet but it seems to be held in place by the spring and also a little metal cover. 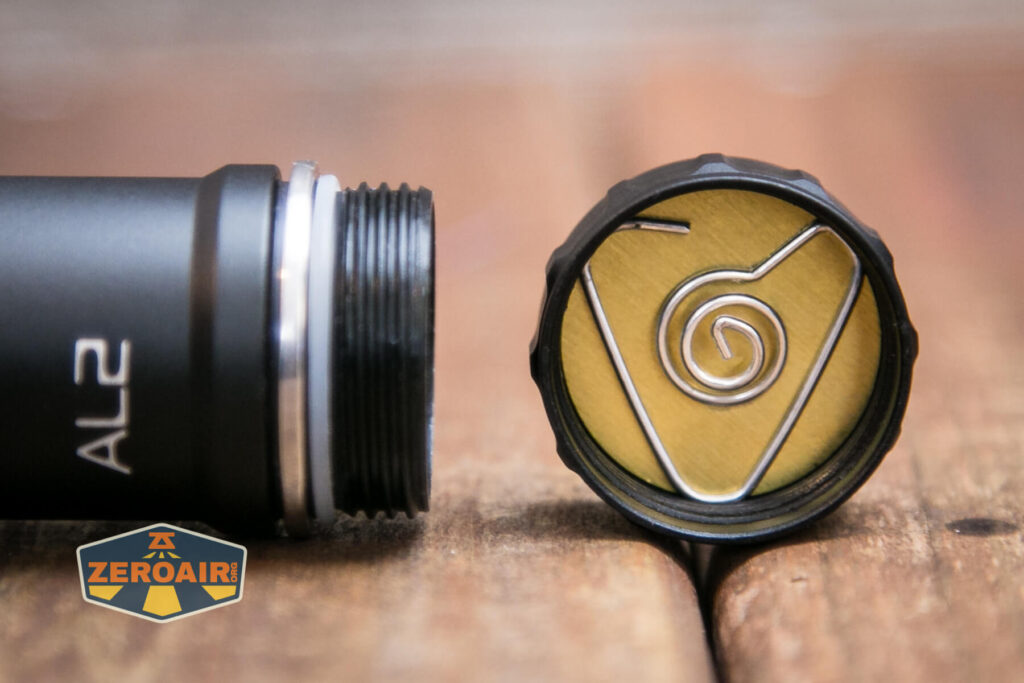 The contact on the head looks like a spring but really it isn’t – it’s just wire that will make contact with the cell and nothing more. 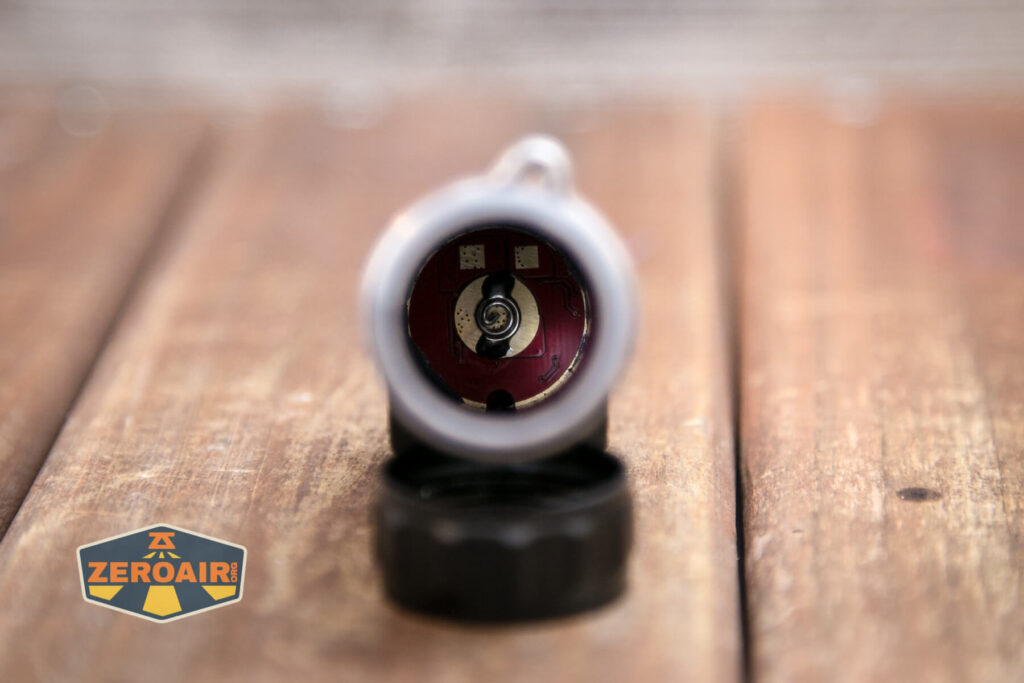 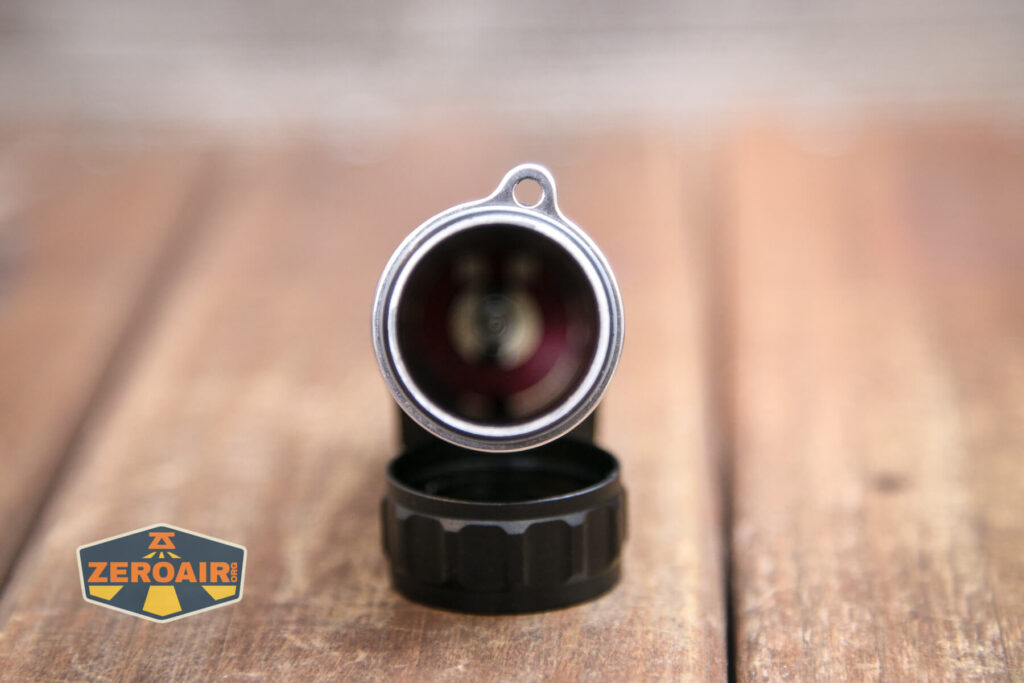 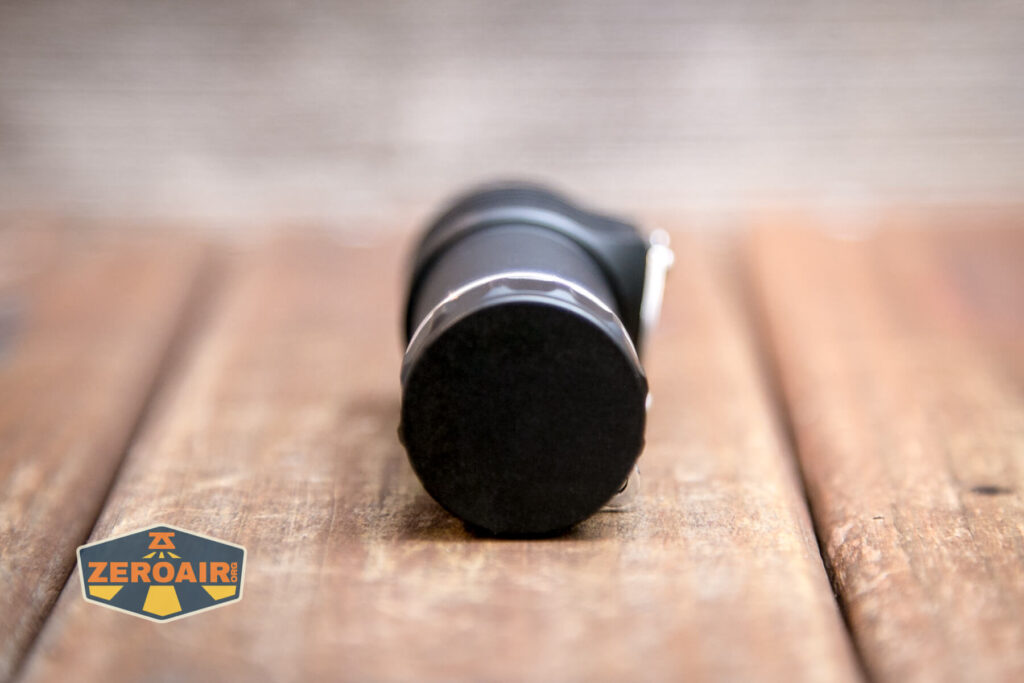 The head has some fairly deep cooling fins. But this light is pulling over 12A on turbo, so there’s only so much these fins can do… 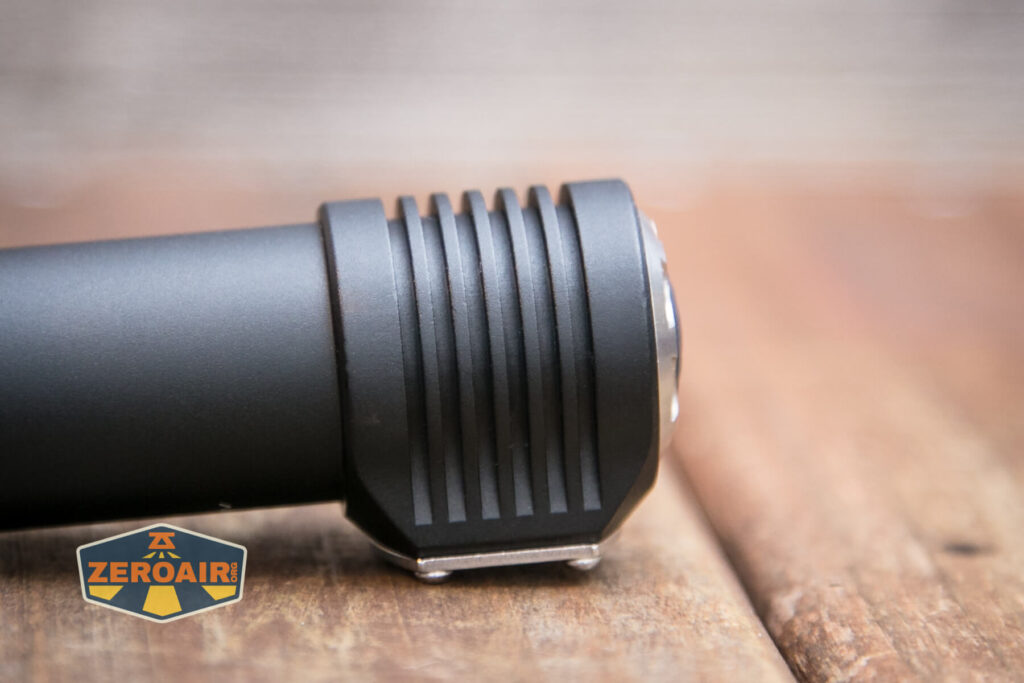 Where else to include this little jar of lube.  This is probably for the threads, but there’s no manual to state it.  It could also be for the seal around the swappable lenses… 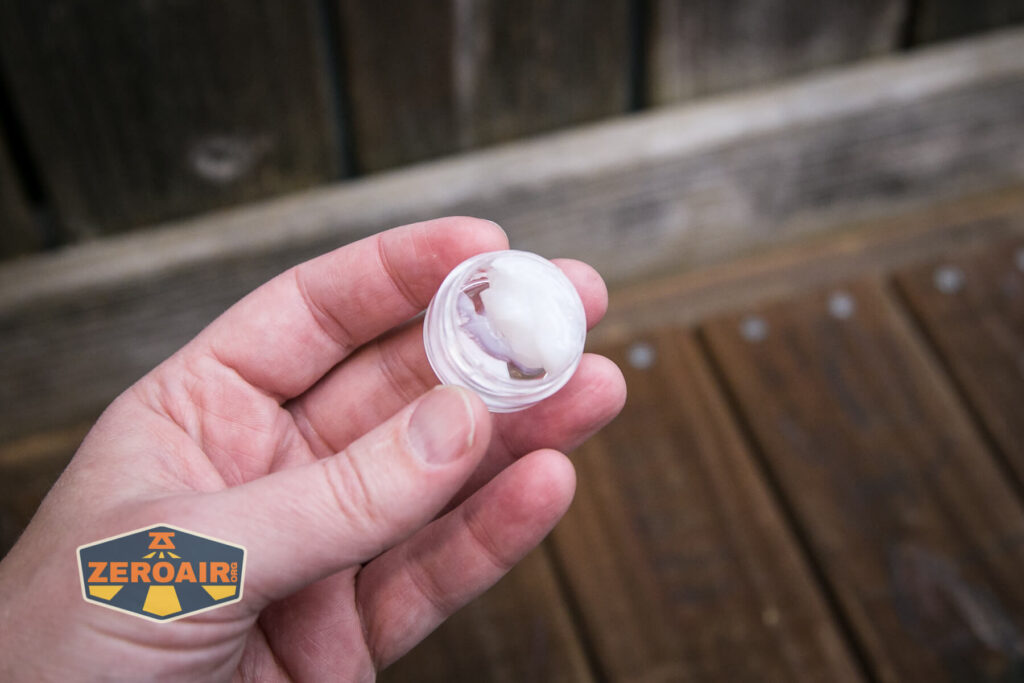 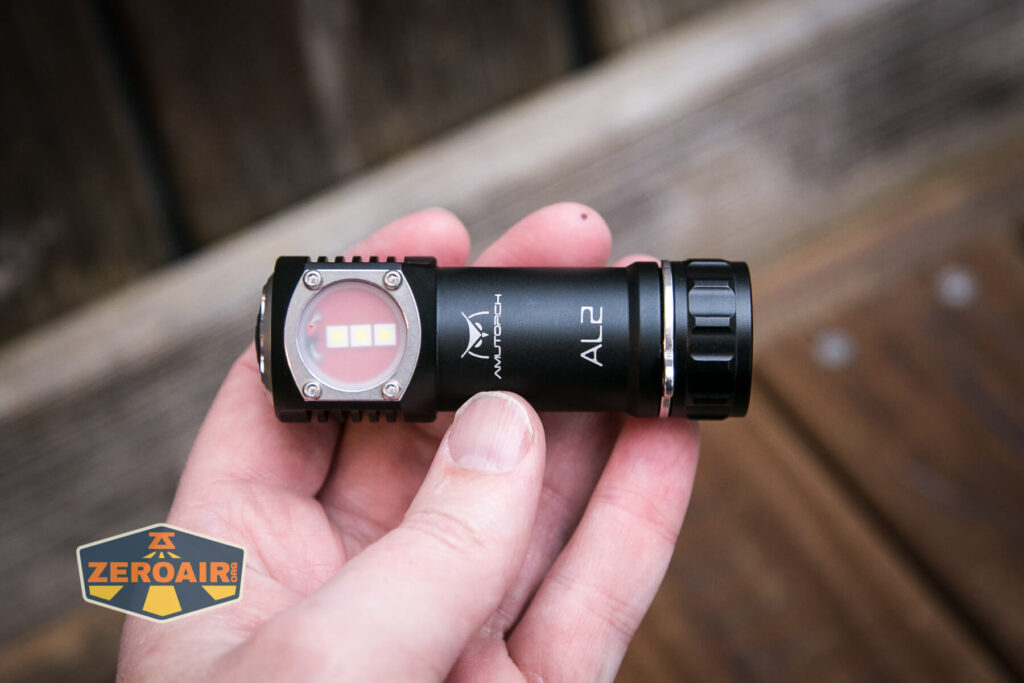 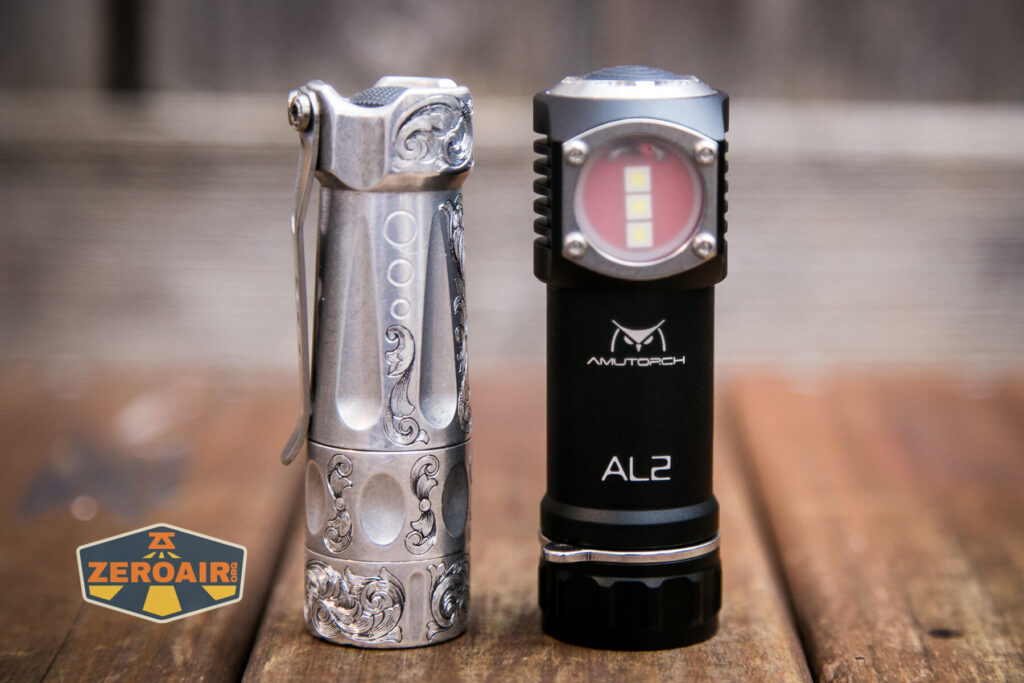 A pocket clip is included but not attached by default. It’s a friction fit clip. The clip is nice thick steel, too, and just attaches “generally on the cell tube.”

Because of how it attaches, it can go up just as easily as it can go down.

The clip is tight enough to scratch the body upon installation and removal, so you might want to pick a spot and stick with it. 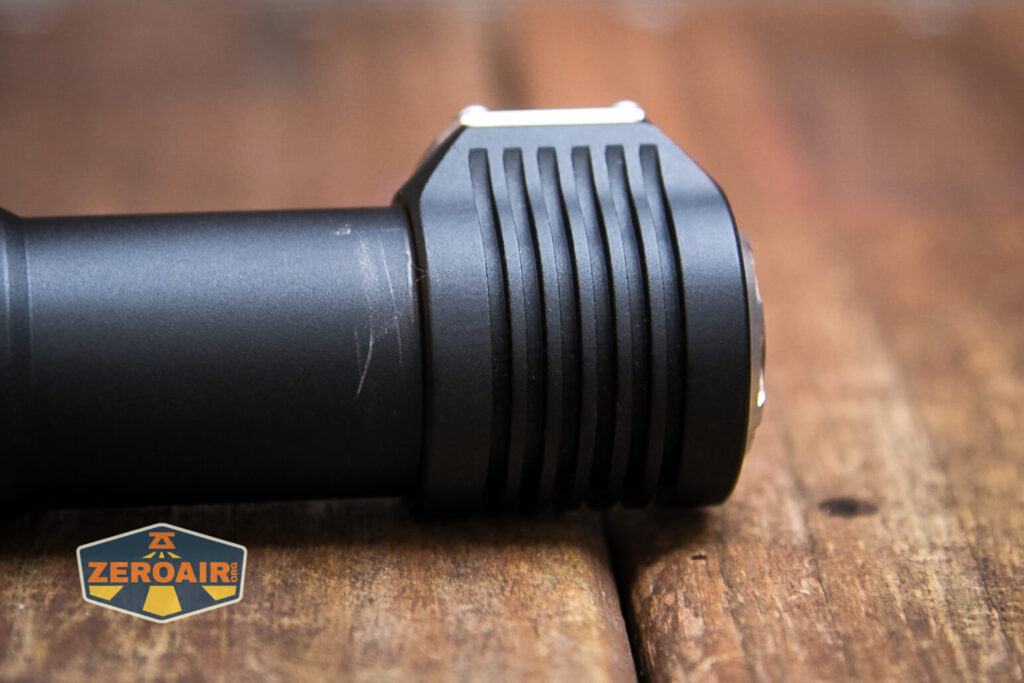 There’s one other way to carry the AL2, and that’s the included lanyard, which attaches on this metal collar lanyard attachment point.

This collar is removable, but you’ll have to pull it over a clear o-ring (or just remove the o-ring first.) 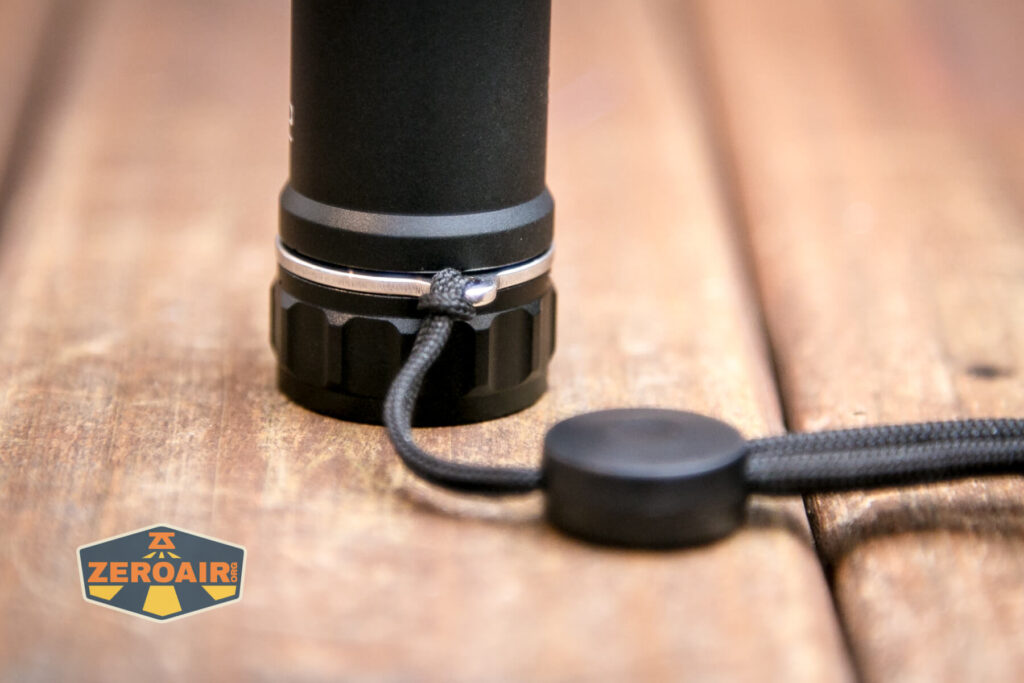 Also worth noting is that there’s a magnet in the tailcap. The light is heavy enough that the magnet won’t hold to small metal things, but on something like a file cabinet, the light will stay in place!

Amutorch provides in the package what you’ll need for powering the AL2.  It’s a lithium-ion cell, specifically a 21700. 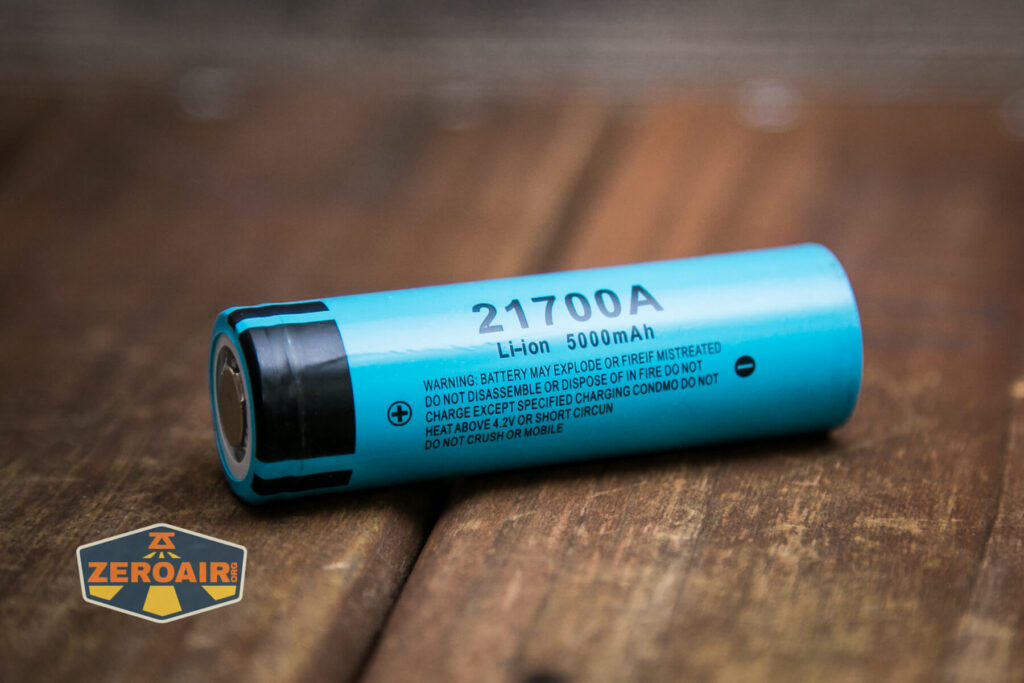 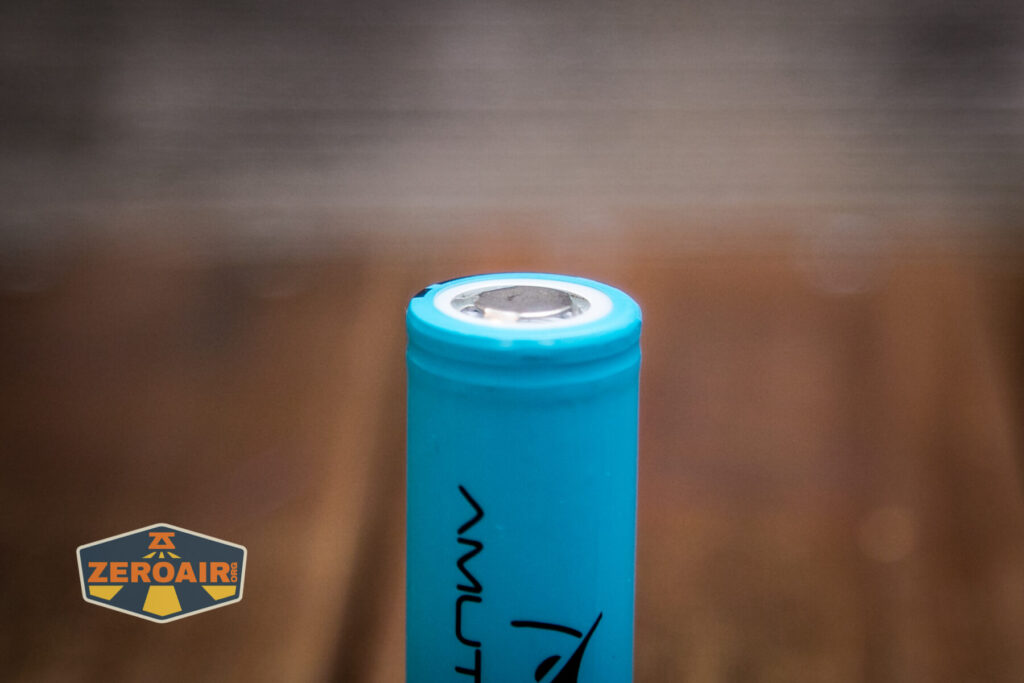 The cell goes into the light in the usual orientation – positive end toward head.

Runtime tests for Turbo are a little disappointing.  I measure the output to be well below specification.  The claim is 3160 lumens, but even at the initial output level, I measure only 1618 lumens. Now I can excuse some of that because those screws on the front of the bezel prevent completely clean measurements.  But I’m certainly not spilling 2000 lumens out of my apparatus. So there’s a bit of reckoning to be done about this. Furthermore, the temperature spikes so quickly (and understandably) that there’s a stepdown at around 30s.  The stepdown is massive, too – to around 350 lumens.  At least after that, the output is very flat. The business you see at the end is a low voltage warning from the main emitter, before finally shutting off around 3V. 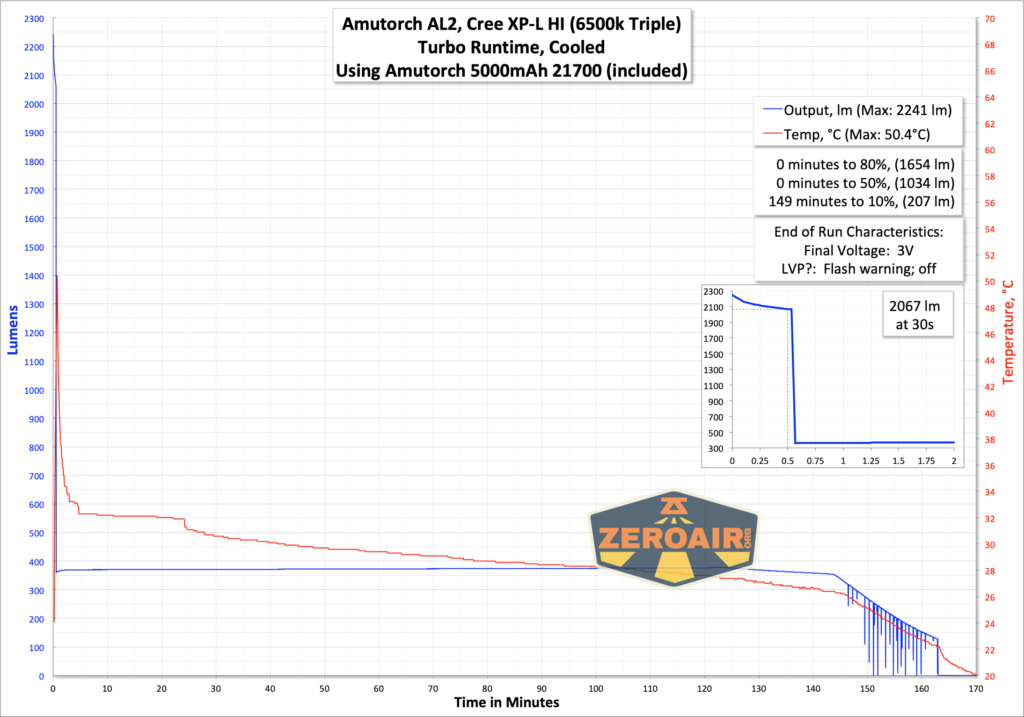 High looks just like Turbo but without the initial high output from Turbo. 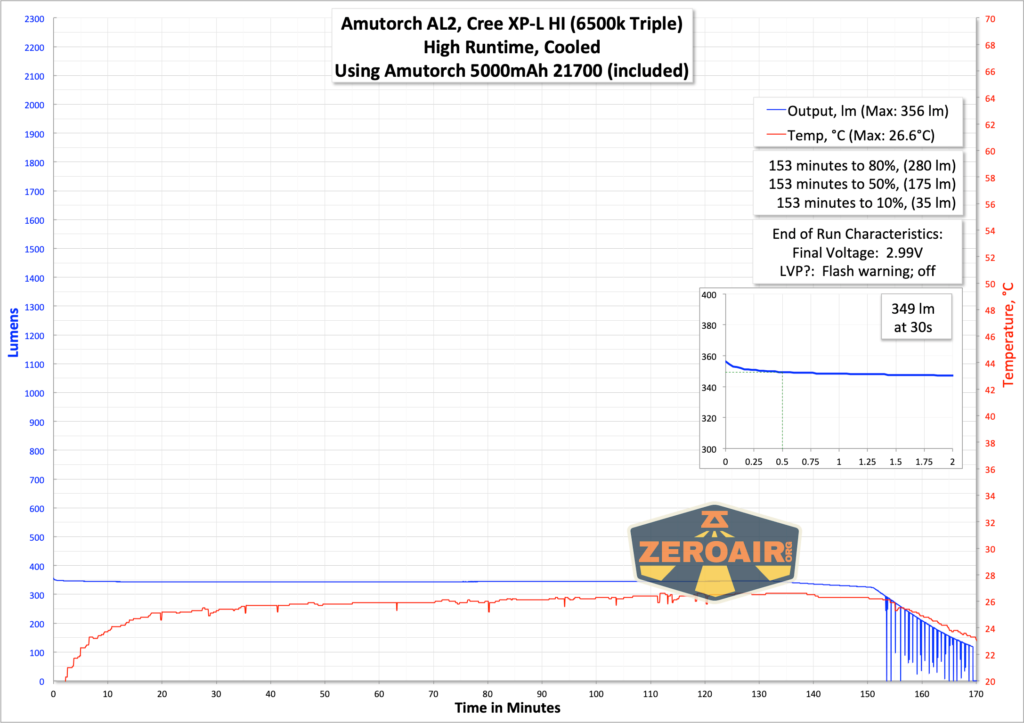 While the Amutorch AL2 flashlight itself doesn’t have charging, dor does the included cell, the package I received (and you can purchase as an option) includes this Amutorch TC2 charger. 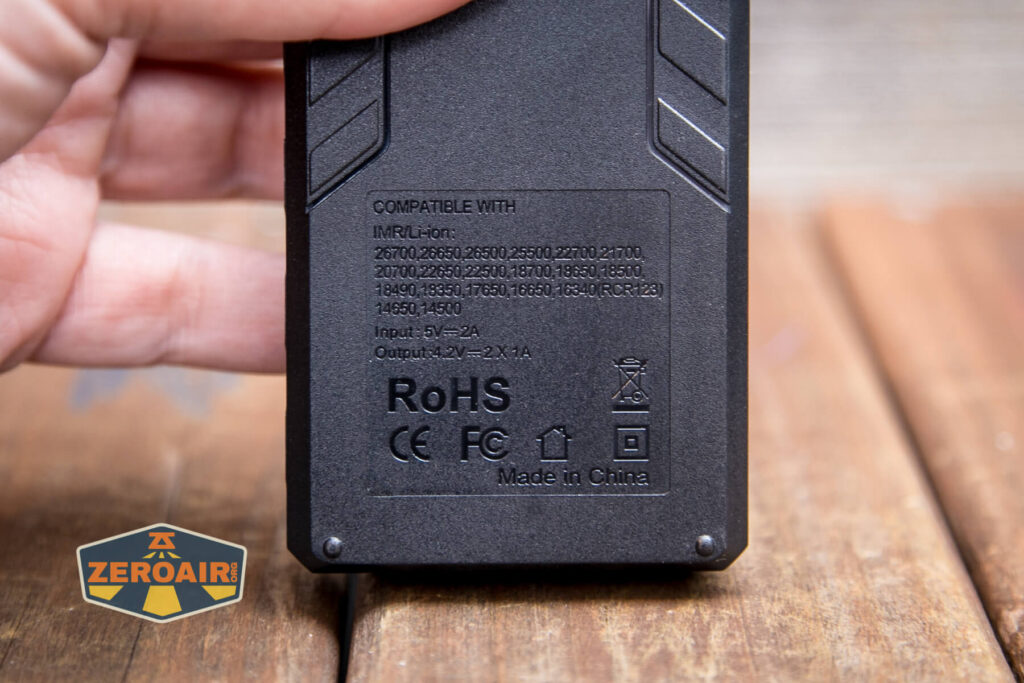 The TC2 accepts USB-C input and will work from a USB-A source or a USB-C source (still with 5V input, though – it’ll negotiate all that.) 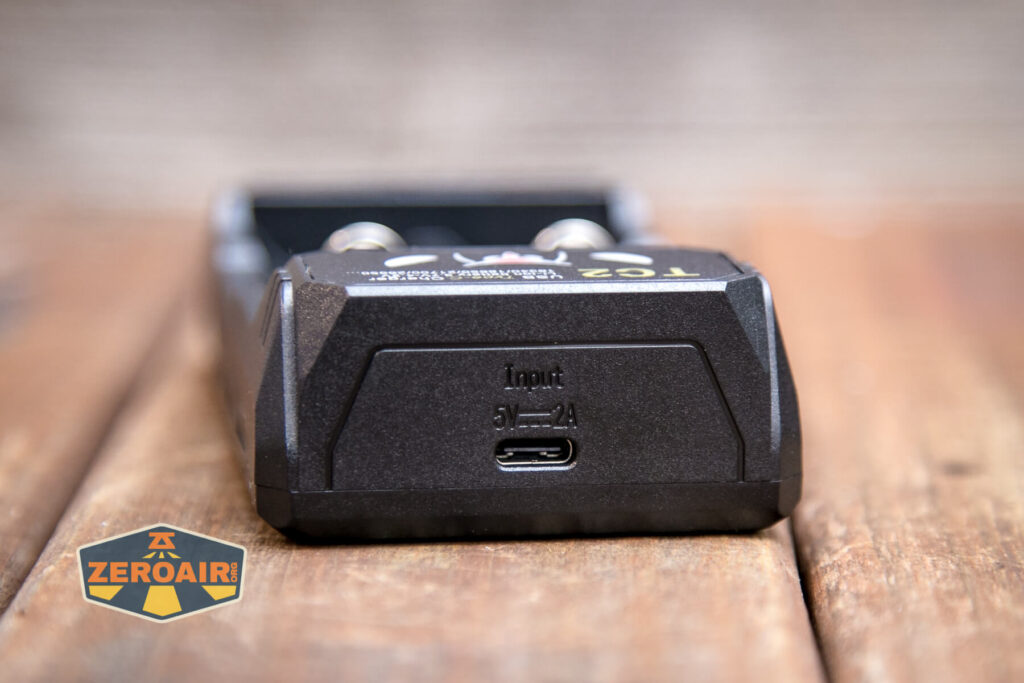 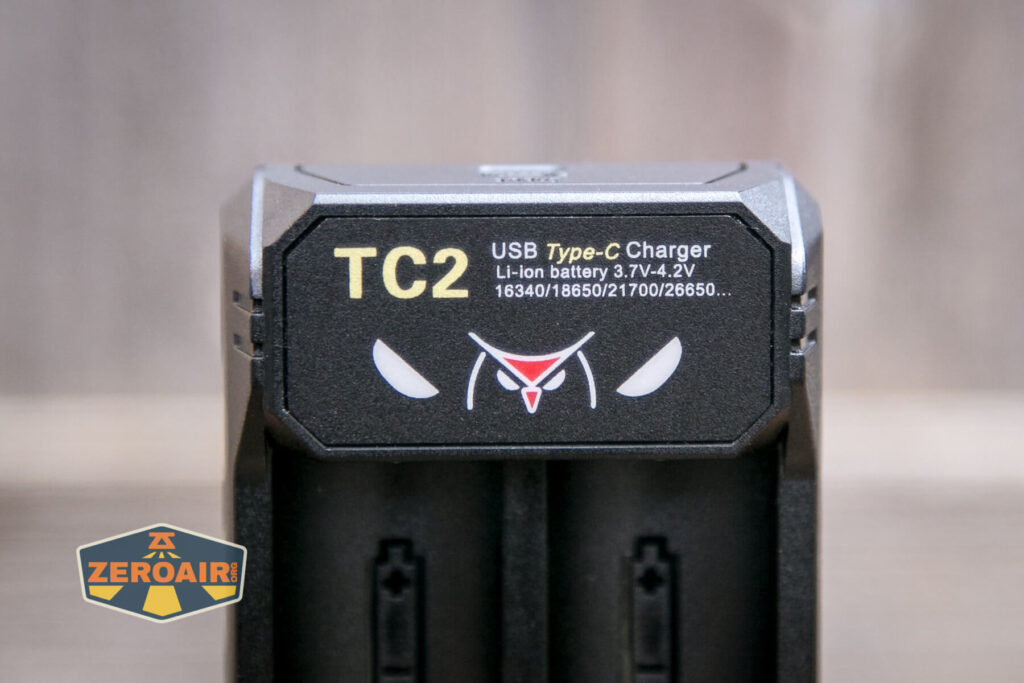 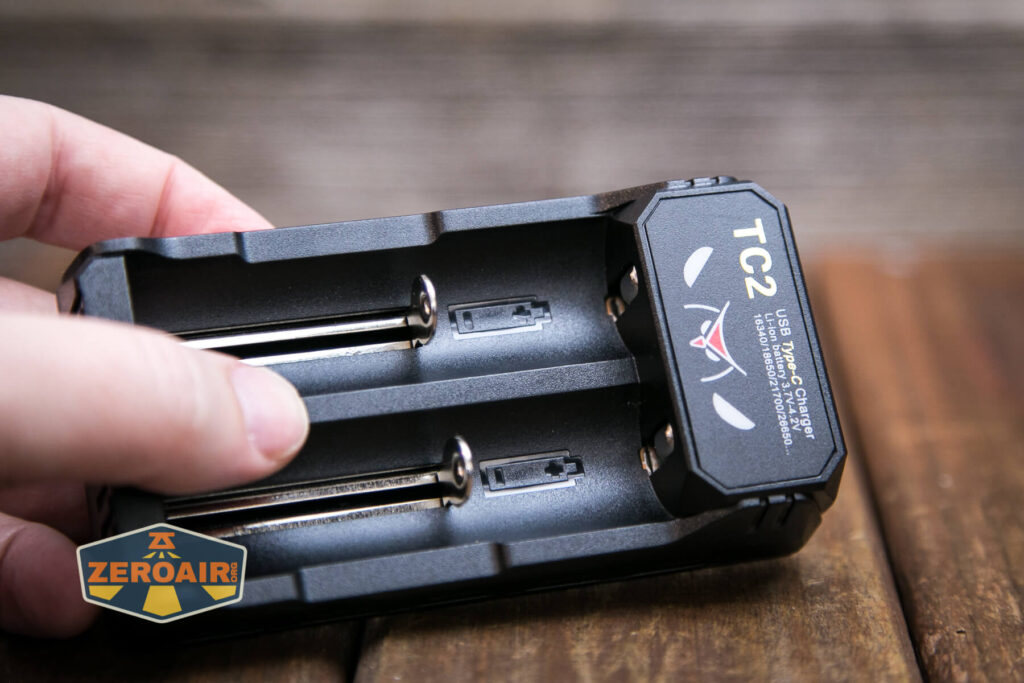 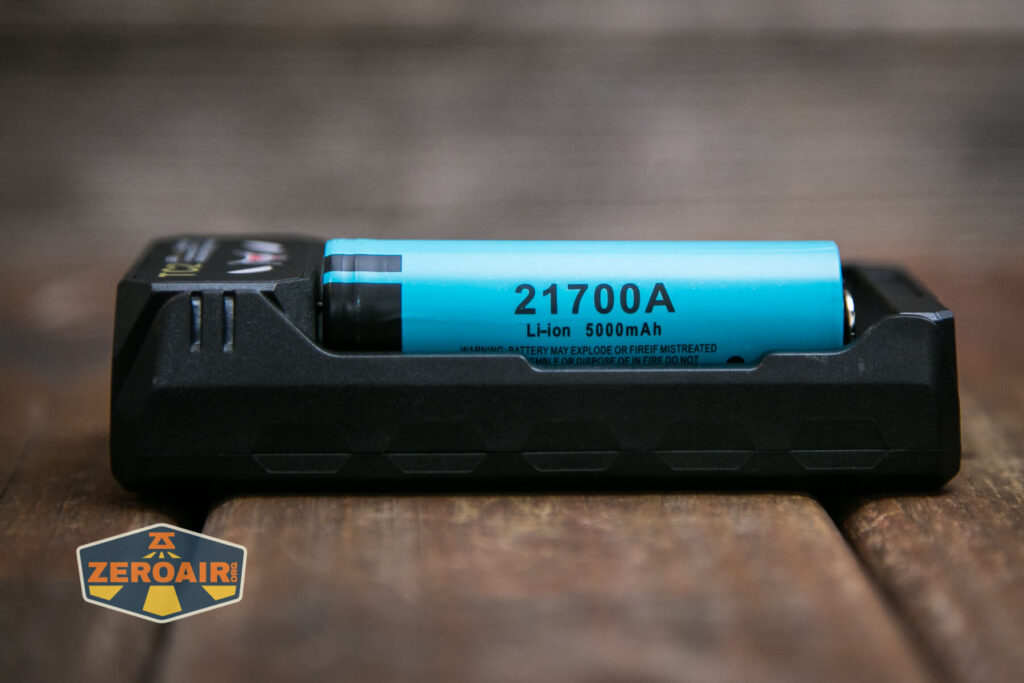 I love the size and simplicity of this charger and was completely prepared to love it – but then it charged this cell to 4.3V.  Now, that’s probably not going to kill this cell immediately – it’s not just completely the safest thing ever, but what it will definitely do is affect the longevity of this cell.  Charging to 4.3V is well outside the comfort zone of lithium-ion cells, and you’ll lose charge cycles in the long term.  I will say that the light didn’t seem to fuss from having a 4.3V cell used, though.

One more thing about charging – I ran this cycle overnight and I’m nearly certain that the “eyes” from the owl logo turned green WELL before the charging stopped (technically I am not sure charging ever actually stopped).  So if you were paying attention (unlike what I was doing) then you could (and really very much should) pull the cell off the charger when the indicator turns from red (charging) to green (complete or “bay not in use”). 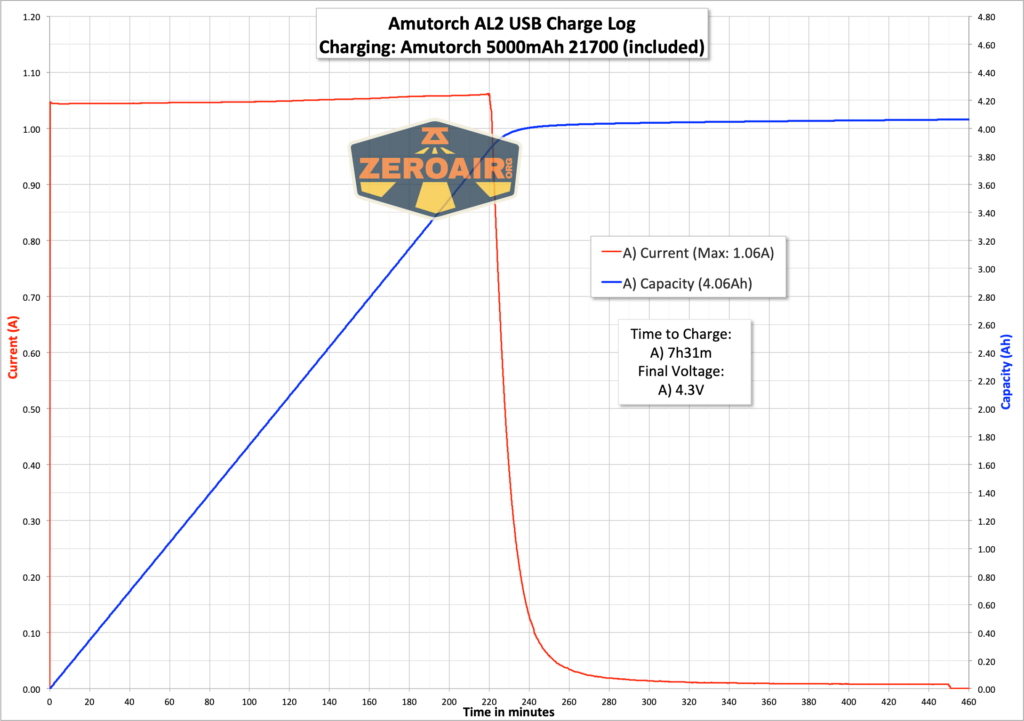 The charger will also accept USB-C input, and I will drop a graph of that in here shortly.

No PWM on any mode.

A single e-switch is used on the head of the Amutorch AL2 flashlight. 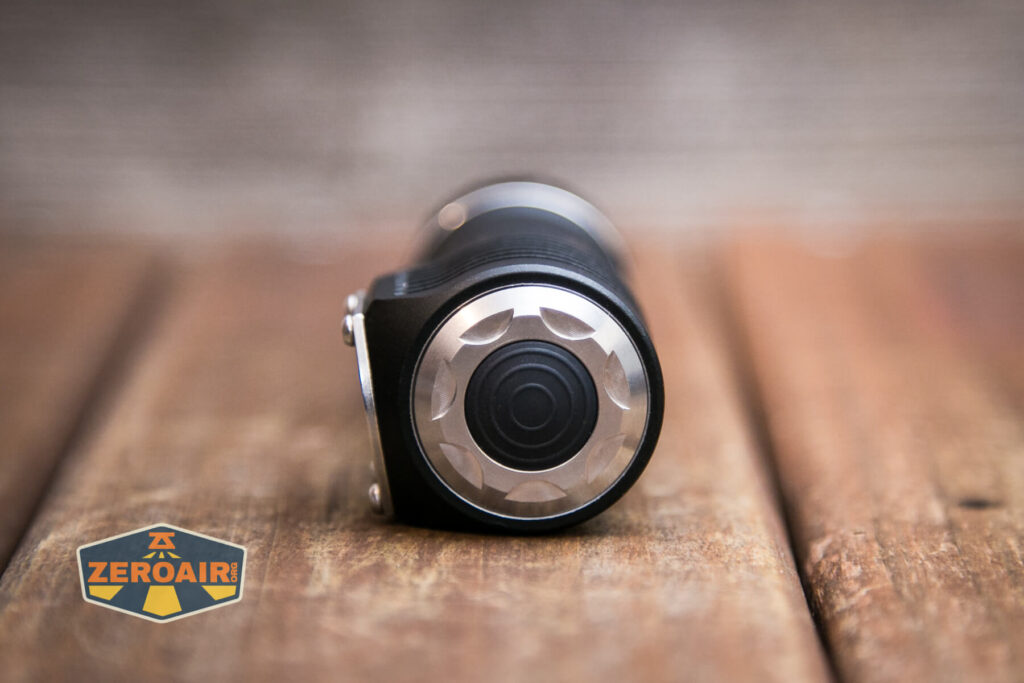 Despite being as proud as you can observe below, the switch itself (the mechanism) does not get pressed when headstanding or mashed while headstanding.

^ Note that mode memory for the clicky mode is separate for memory from ramping mode.

Amutorch has used three Cree XP-L HI emitters in the AL2.  These are in an unusual configuration of being all lined up. 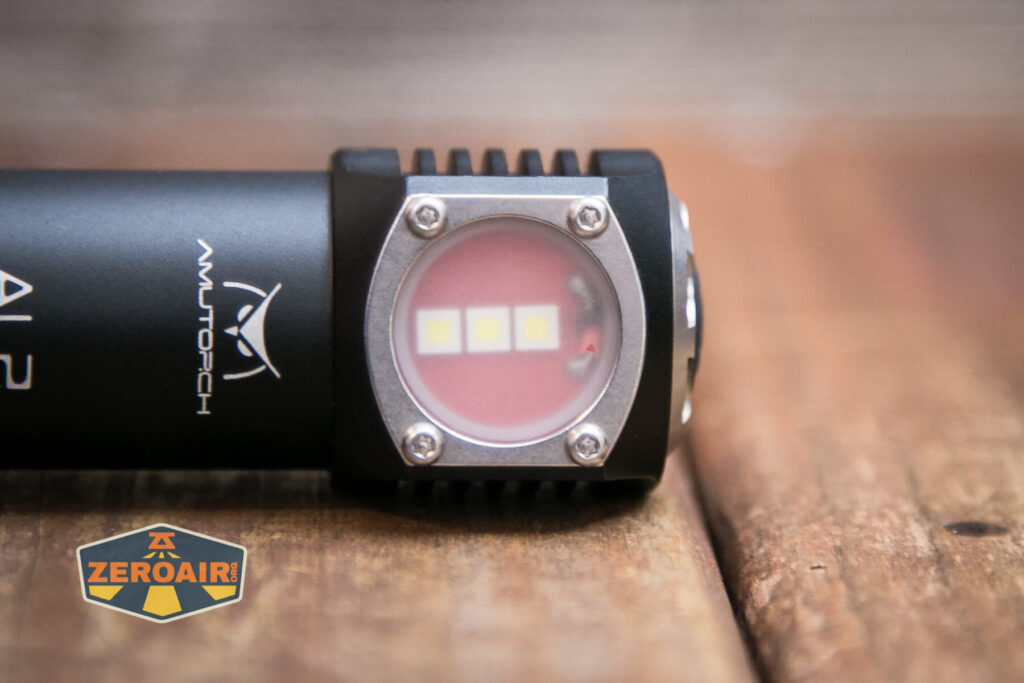 I’m not sure this serves a functional difference, and you could likely swap in a more traditional mcpcb here, too, provided the wire setup suits your mcpcb. 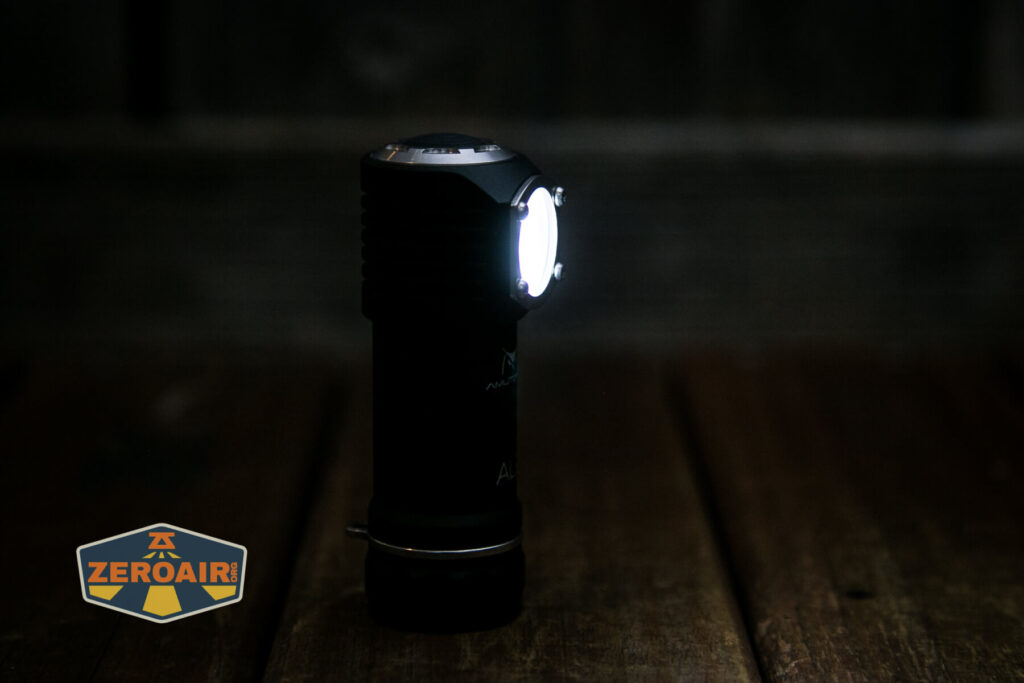 As stated above, the output is extremely floody. 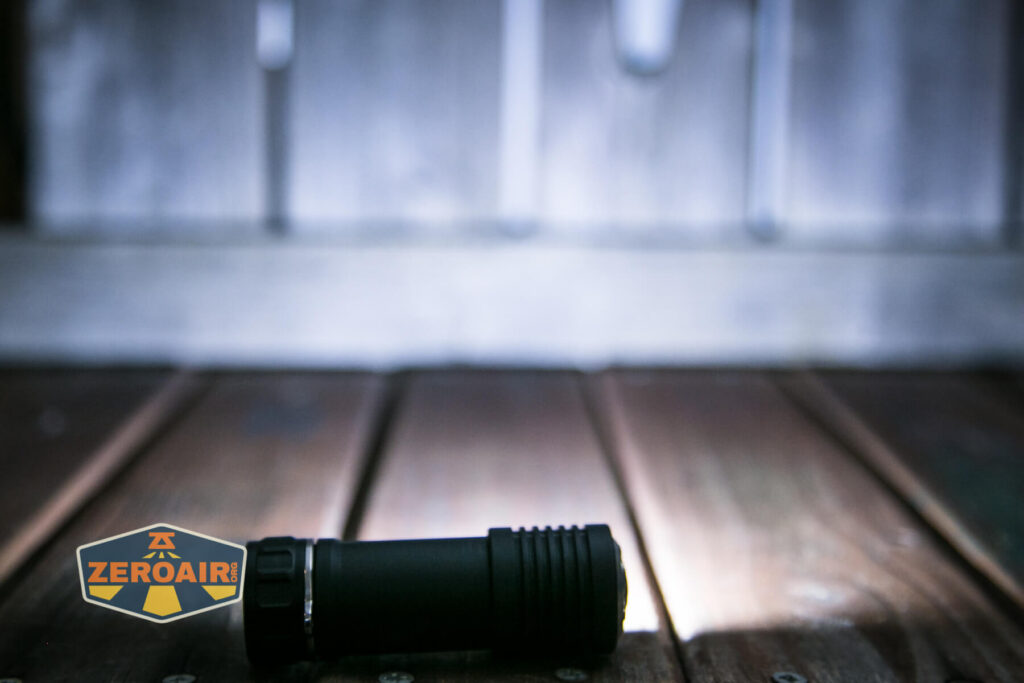 It’s possible to change that up a little bit though, as Amutorch includes three (total, with one installed) lenses.  They’re of various translucency, which will affect the flood.  The default is the one seen below. 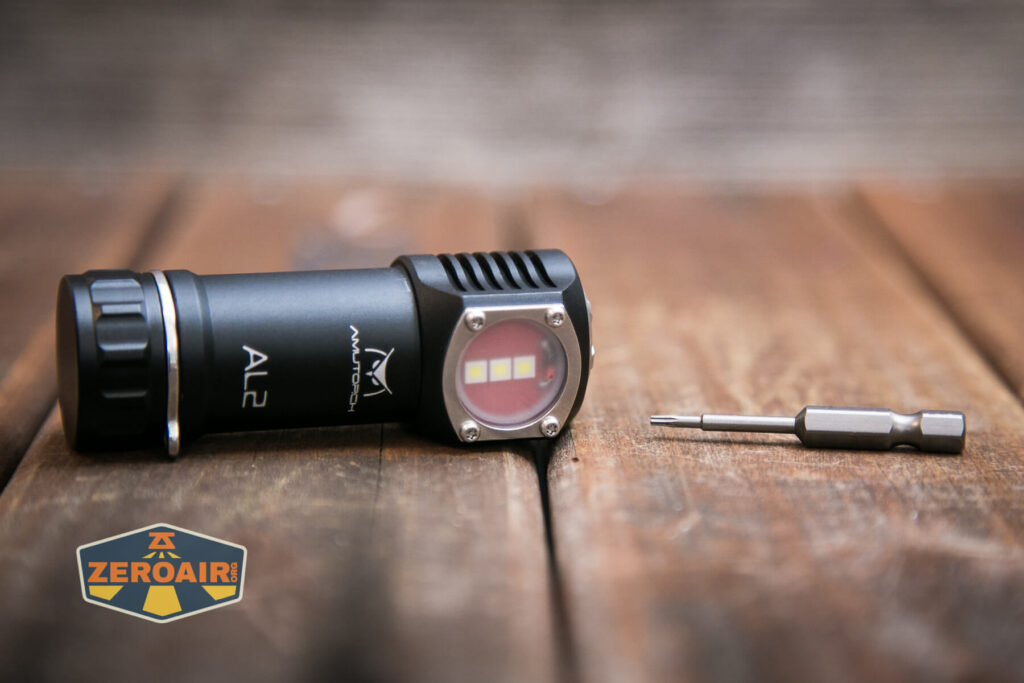 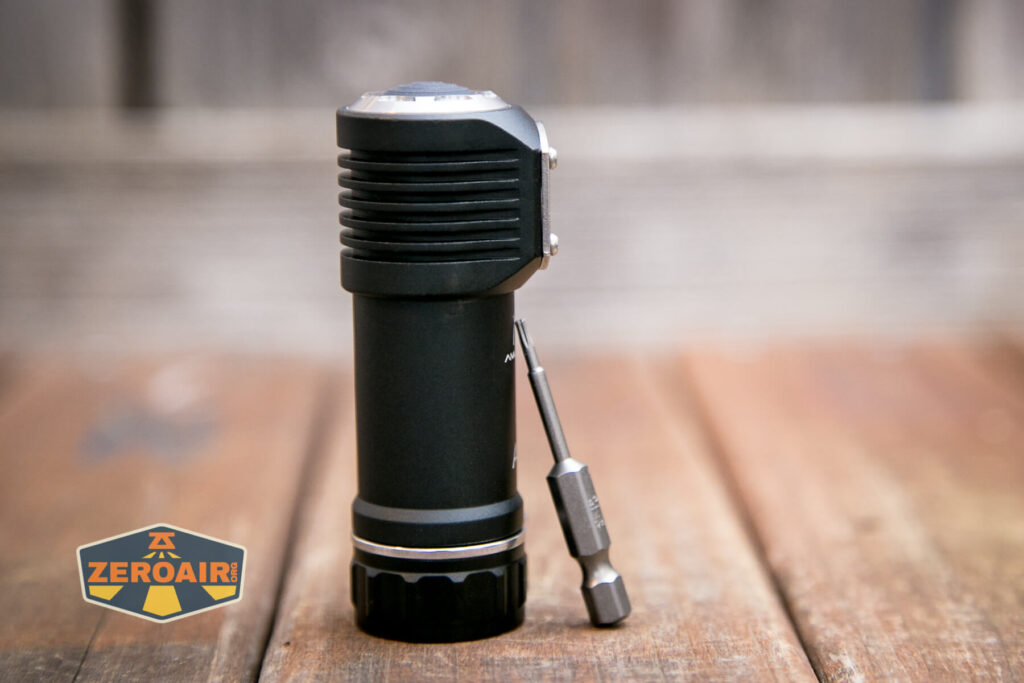 The CCT is approximately what Amutorch claimed – around 6500K on average.  In Turbo output, which drives these emitters fairly hard, the CCT jumps to around 7500K (very cool!) The CRI stays moderately low, at around 75.

This content originally appeared at zeroair.org.  Please visit there for the best experience!