Brinyte introduced the HL28 Artemis, a headlamp that uses two 21700 cells, has white, red, and green emitters, and a zoom feature! Read on!

There is only one version of the Brinyte HL28 Artemis headlamp.

I am not seeing the HL28 Artemis in the Brinyte store at this time.  Based on the feature set, I’m guessing this light costs north of $100.

A headlamp incorporating a Fresnel lens?! How neat. This emitter swapping Green/White/Red option is neat and makes this a reasonable all-purpose zoomy, but I wonder how often a user would actually need all the colors at any given time. So it’s neat but useful? I’m less sure of that. Next, the zoomy feature. Normally that’s a big no-go but if you accept it for what it is and move on, you can see that this one does that feature very nicely. So while you might not like the zoom feature, those who do want it probably will like it quite a lot. Finally the power source, two 21700 cells, is good. They’re heavy, but actually balance the whole apparatus quite well.

The Brinyte HL28 Artemis headlamp is a lot to take in, really. Particularly in that it doesn’t really fit my usual flashlight review photography format – so sorry if these photos end up being a bit disjointed or in poor order.

The HL28 Artemis shipped to me already built onto the headband. That’s probably how you’ll receive it too, and that’s a good thing. There are really quite a lot of parts here.

As I said above, the cell carrier (2×21700) provides a good balance to the unit overall.  That there’s a zoomy headlamp part does mean there’s a good bit of weight out front. So the weight of two cells being directly on the back of the head (“opposite to” the light) is great. A single 18650 (for example) wouldn’t work here – the light would probably tip forward and off your head, crashing into your nose and leaving you as an embarrassed puddle in the dark.

The zoom feature has a nice big barrel for grip.  Twisting it is much like twisting the zoom of a camera lens. It’s very smooth.

And when moved around, the light stays put quite well, due to these ratchets you can see below.

Yere you can see the double-barrel cell setup. The bays are not connected physically – you must remove these tailcaps for each bay. They are likely connected electronically, though, but more on that later.

Here’s my biggest complaint about this light. These tailcaps are very hard to manipulate.  You can see that the threads are not anodized. They’re also very fine. But if you think about how the cell goes into the light, you can see that these are essentially caps that go around the cell. (That part is fine.) But then you couple that with the springs… and you’re pressing the tailcap into the body against a cell and working on unanodized fine aluminum threads. It is not smooth at all. In fact, and as you can see on my finger below, the threads shredded more than once when I was reinstalling the tailcaps.

The flip side of that information is that you might literally never choose to remove the tailcaps. Since the light has built-in charging, you can just charge the light as is and never remove the cells at all. I would strongly recommend that, because interfacing with these threads on these tailcaps is not fun at all.

It doesn’t seem to be possible to remove very much out of the headlamp without a real and proper disassembly. For example, these wires into the light do not come out when this thumbscrew is removed.

I don’t see an official size listed (and really that’d be a difficult thing to specify). But I can weigh the light. It’s not very light!

The Brinyte HL28 Artemis headlamp is only a headlamp, and nothing else. It isn’t even designed to come of of the headband, and removing it would probably be an accomplishment.

The headband carries the heavy unit quite well. It’s also fairly adjustable, too. The backside (where the cells are) has a grippy silicone holder that rests against your head.

The front side has an even softer pad on the back of this hard plastic piece.  Both are good, and both serve to keep the light in place very securely.

The over-the-top band is likely removable, but I won’t cover that because you will not want to remove it. This isn’t a light that can be supported by just an around-the-head headband.

The Brinyte HL28 Artemis headlamp runs on two 21700 cells, and they are included with the package. They’re held in place by two tailcaps.

That “coin slot” is actually probably better referred to as a “coins” slot – three pennies fit in there just about right. If you use something else, you’ll scratch these fine edges on the slot, too, so really, use something thickish. Be sure to get those threads exactly caught properly, or you’ll mess up the threads. THEN go ahead with your coins to tighten the tailcaps.

The power pack seen above (two 21700 cells) is not hardwired to the headlamp. That’s surprising to me since nothing else is really removable at all. What does connect the battery to the headlamp is this barrel plug.

And you might think, “awesome, I can power this headlamp from a normal barrel plug-type power source!” But no, this “12V-looking” barrel plug runs at the voltage of a single lithium-ion cell – 4.2V. AND the headlamp itself has the male plug. Brinyte includes two 5000mAh 21700 cells in the package. They’re good cells, and seemingly “normal.”

There’s actually one difference in these cells and most 21700 cells – these have USB-C charging! I did not test that feature since the light itself has charging (and again, I don’t really suggest you remove the cells!)

The battery pack is covered in a silicone protector but the battery pack doesn’t come out in any convenient way. if you disconnect the power, though, the metal case will slide out with some effort. Honestly, the effort of removing this entirely is less than the effort of swapping the cells through the removable tailcaps.

The cells go into the HL28 Artemis in the “usual” way (so to speak). That’s with the positive end (the button) going in first. You might look at the photo below and think that these cells are just swimming in that cavity – and you wouldn’t be too wrong. But don’t forget that the tailcap actually goes over the cell, too. So there has to be room around the cell for the wall thickness of the tailcap. Even so, there is a noticeable cell rattle.

Here’s one runtime. Because this light has an infinite ramp with the rotary and not even any detents to delineate modes at all, I tested only the highest output on the white mode. I have no reason to believe the performance on any of the emitter options would be different in graph shape than this runtime with the white mode.

Yes, all that bouncing around is visible. I am not sure why this is happening, but it’s really quite visible during usage.

I don’t believe it’s possible to run the HL28 on just one cell. It is possible, however, to run the HL28 on other cell sizes that fit – for example two 18650 cells, or two 20700 cells – those will work. Brinyte doesn’t really specify this on their product page, but I wouldn’t recommend mixing cell types.

There’s a built-in charging port on the cell holder. This is a proprietary magnetic connection.

Brinyte includes a charging cable, which is USB to proprietary magnetic. However, you can remove the cells themselves, and charge them via USB-C (since they have a USB-C port) or charge them in a regular bay charger.

Here’s a charge graph. I noticed something that the manual states explicitly. When charging, all four green charging indicator lights will go solid green before the charge reaches 100%. The product page says that “80-99%” is four solid green indicators. The indication during charging is a little finder detail than with the battery check (seen below), though. 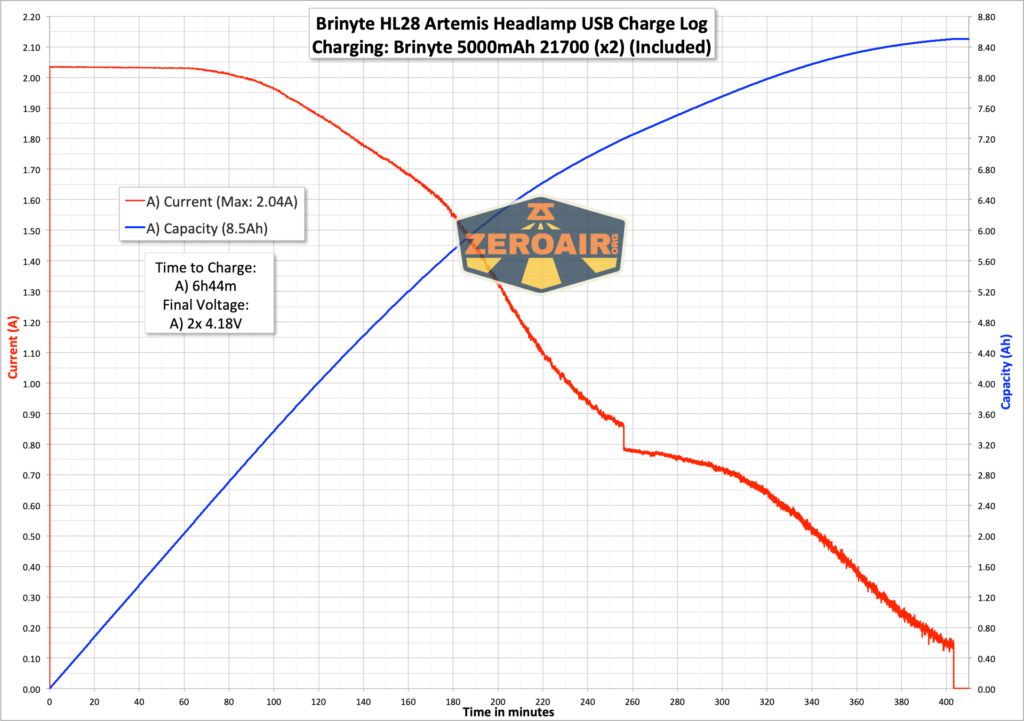 It’s also possible to check the charge by tapping the charge port – it’s capacitive (I guess?) and will respond by lighting the appropriate number of LEDs, as follows:

Just a representative sample of the PWM – there is no PWM. The lowest and highest with all 3 emitters is shown (the order doesn’t actually matter, since there’s no PWM at all.)

For operating the output, there’s just one switch. It’s this rotary dial that goes from “clicked off” to “fully on” over approximately 3/4 of a rotation.

The switch is rotary only, there’s no press feature. With the light mounted on your head in the normal way, this rotary switch is on your right-hand side. I’m not sure where it’ll be if you’re in Australia, though.

There’s also the possibility of switching emitters. This is not a filter – it’s actually physically switching between three actual emitters. It’s a very neat feature and does work quite nicely.

Brinyte does not state what emitters are used in the HL28. As I said above, there are three actual emitters.