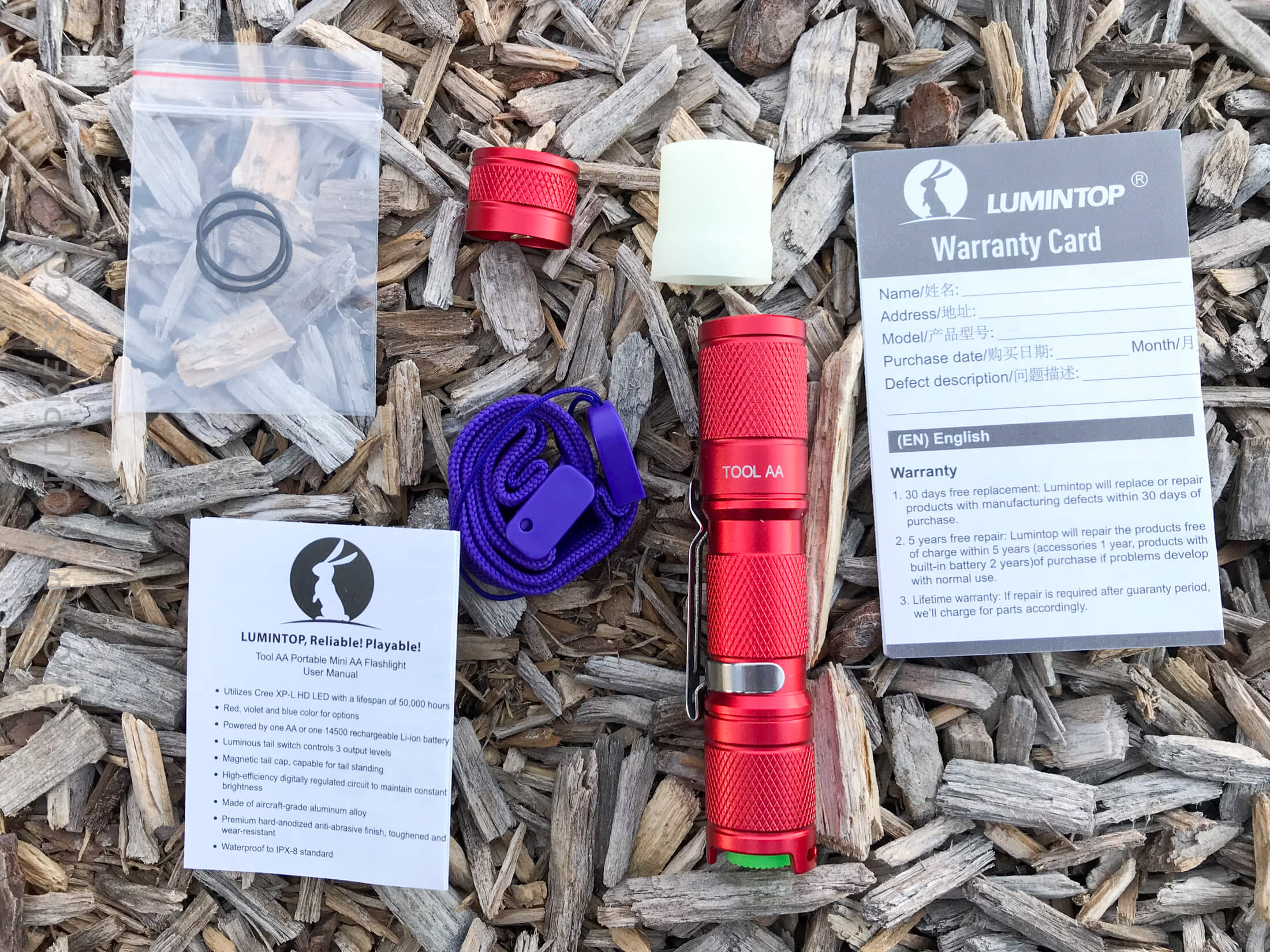 I have reviewed a bunch of Lumintop lights, and really, I’m a fan.  The Tool AAA series was good enough that after I got the two review versions, I bought two more myself!  This is the Tool AA, which shares the look of the AAA version, and features as well.  Like the AAA version, there are a few options for this light.  Read on!

There is a reverse clicky, and twisty tail version of this light.  The package I have for review contains both UI options.  There are also many colors in this light:  Black, red with green cap (seen here), blue with green cap, purple with green cap.  The color options seem to be named “Tool AA C-Edition” which I take to mean “Christmas” but I can’t find that verbiage on the product page.

This is a fine little light.  One I probably prefer on an AA cell, but I love the option for a 14500 as well.  The build is great and the light feels like quality in hand.

* Standard measurement disclaimer: I am an amateur flashlight reviewer. I don’t have $10,000 or even $1,000 worth of testing equipment. I test output and such in PVC tubes!! Please consider claims within 10% of what I measure to be perfectly reasonable (accurate, even).

Lumintop strayed from their normal package, because this is intended as a Christmas light.  The Lumintop branding is there, with a bit of Merry Christmas imagery.  The package is void of specs and features, but a GearBest inventory sticker has been added.

Inside the cardboard package is a plastic flip-top container (good for permanent storage), held closed with two tiny magnets.  The light and goods are held in place in foam cutouts. 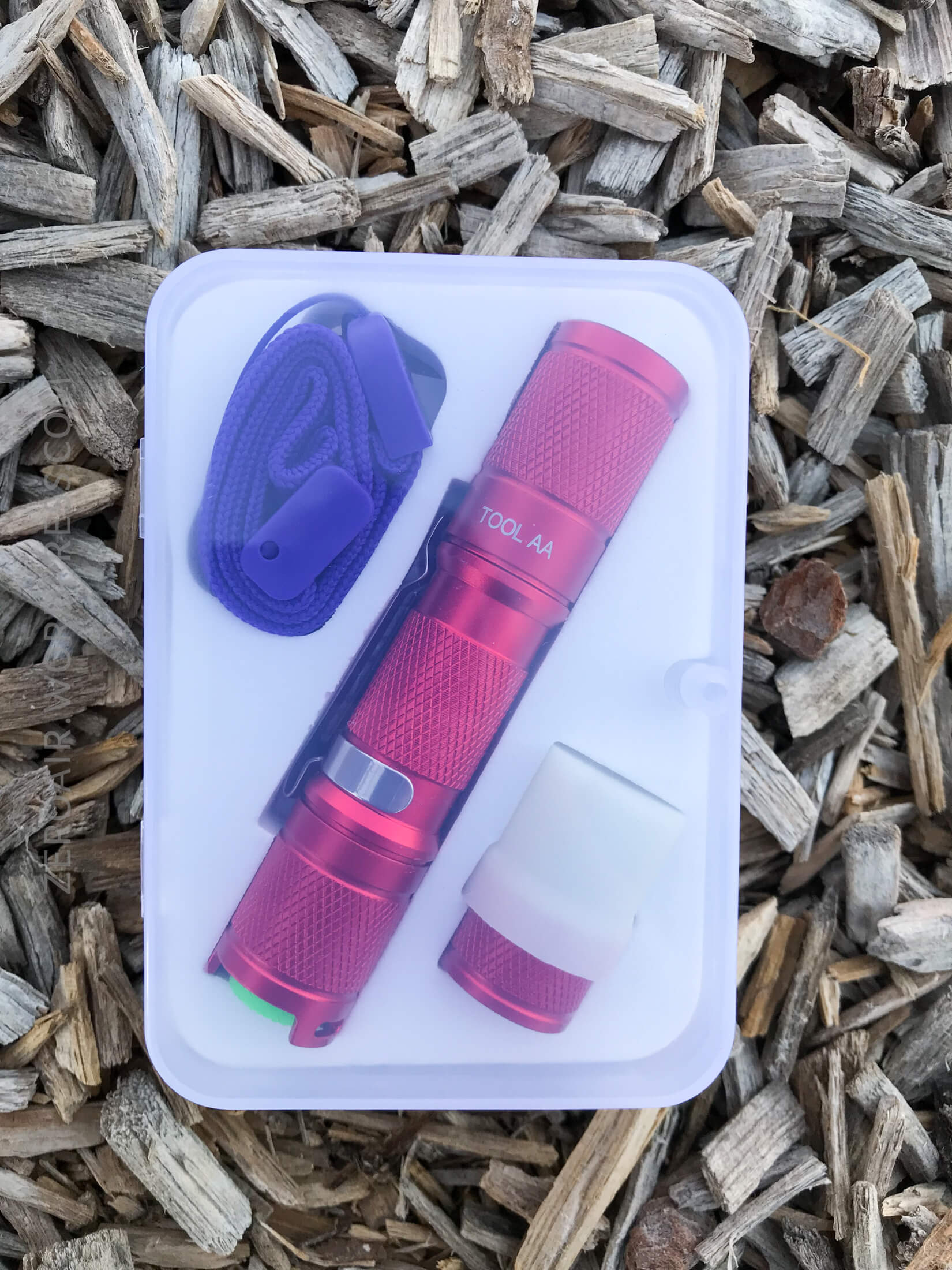 The manual is ok – I find the table with runtimes and output to be slightly confusing, and I’m not sure the UI is covered completely enough.  However, it’s an uncomplicated light. 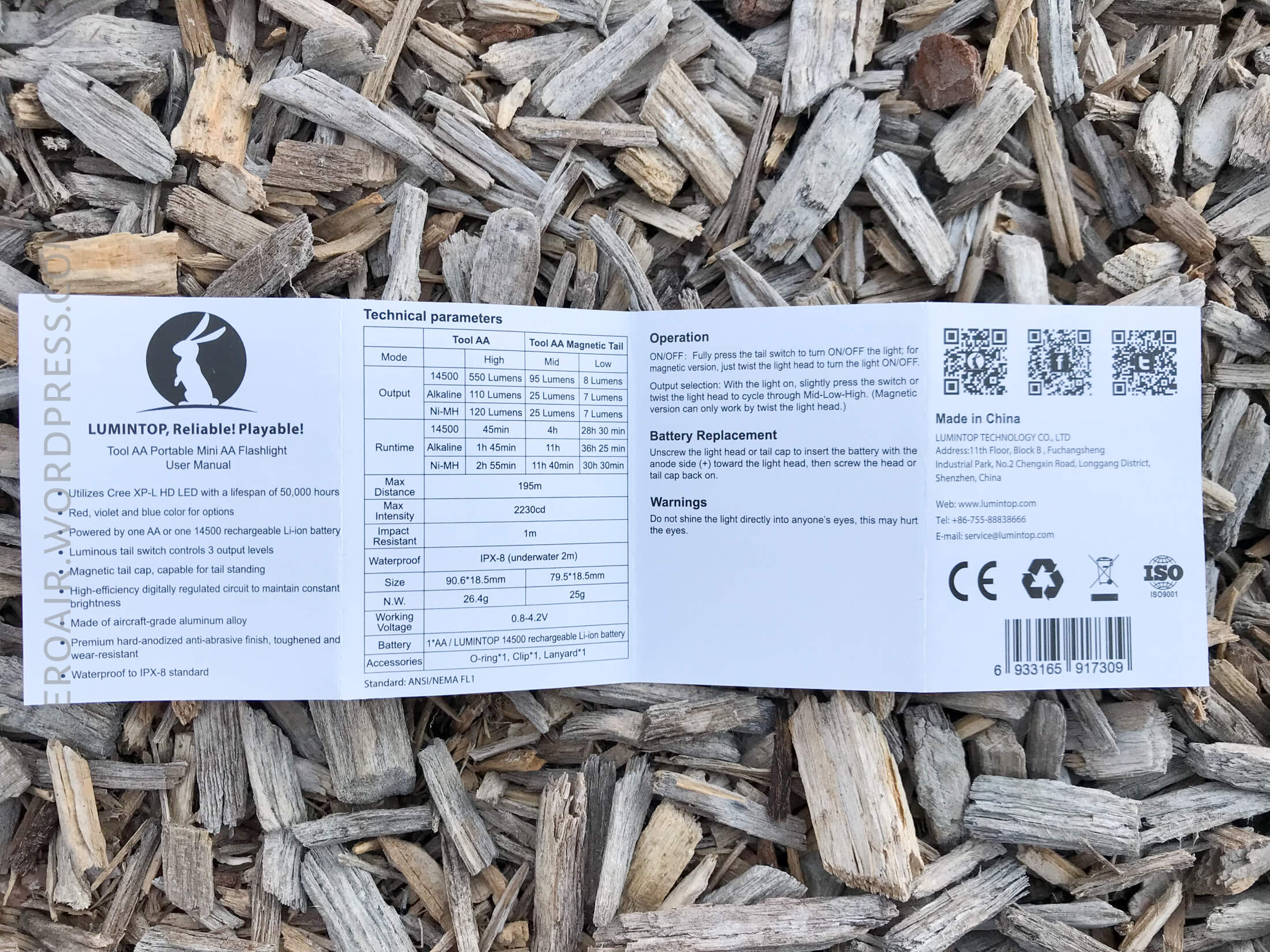 As stated above, this is a nicely built light.  Most Lumintops are, really.  The red anodizing on this light is superb.  There’s a nice gloss to it.  The knurling is diamond pattern but very shallow and not grippy at all.

The light disassembles quite well.  The head and tail come off the cell tube, which is reversible.  The clicky tailcap has a retaining ring, so the clicky and boot may be accessed and maintained.  The emitter end as well, can be unscrewed to reveal an aluminum pill and the emitter, for easy swapping.  The magnet on the tailcap is held in with a “retaining spring.”

Officially: 91.5mm long, and 18.5mm wide, weighing 23.5g.  The twisty version of this light is a fair amount shorter than the clicky version.

The Tool AA is in line with other AA sized lights I have on hand.  A little shorter, even in the longer configuration, actually. 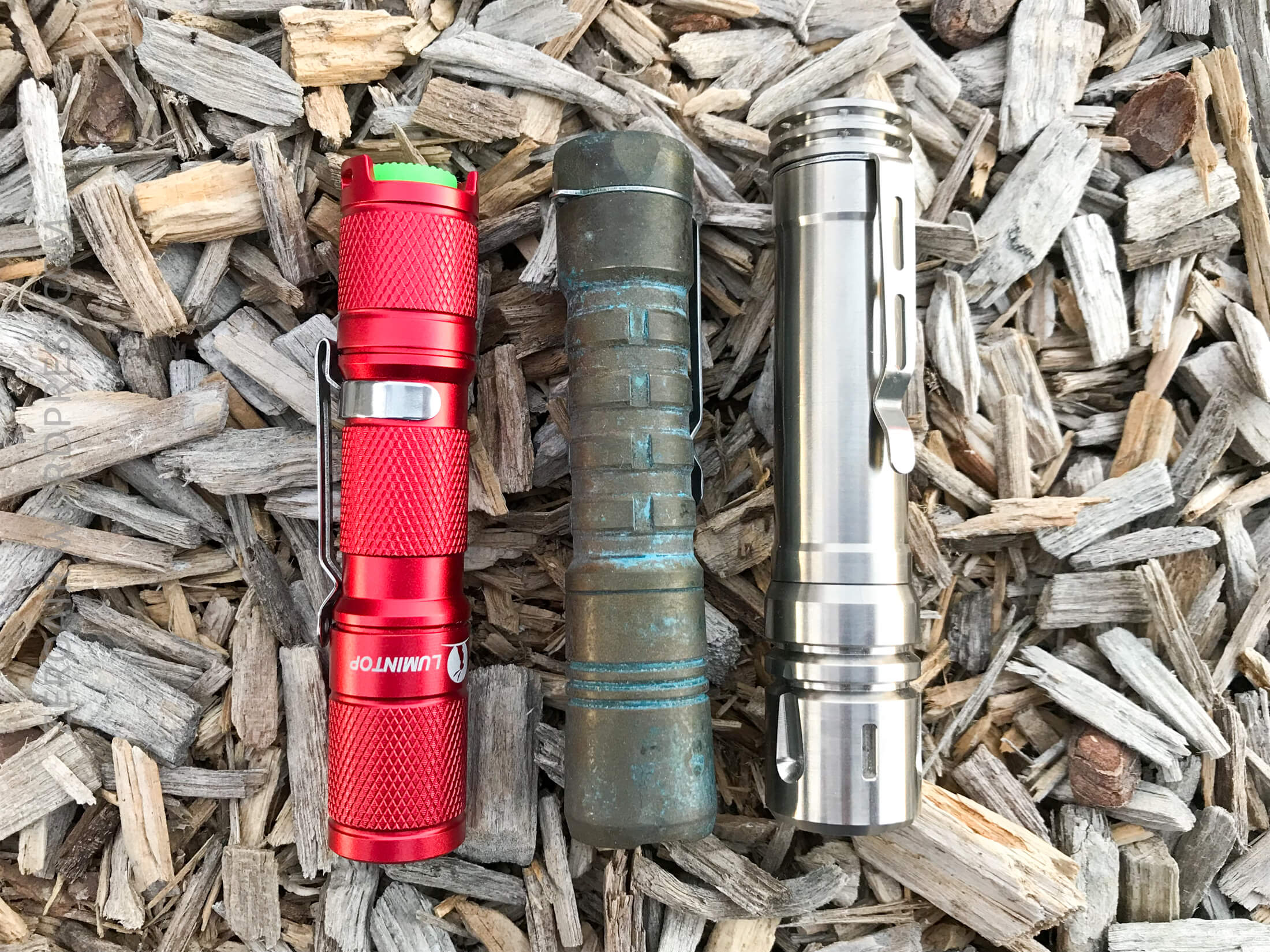 Above in the center, that’s a Reylight Pineapple that I forced patina on!

The Tool AA arrives with a reversible pocket clip installed.  Since the tube is reversible, one may switch the direction of the clip without actually removing the clip; just take the head and tail off and swap them (and flip the cell too!). 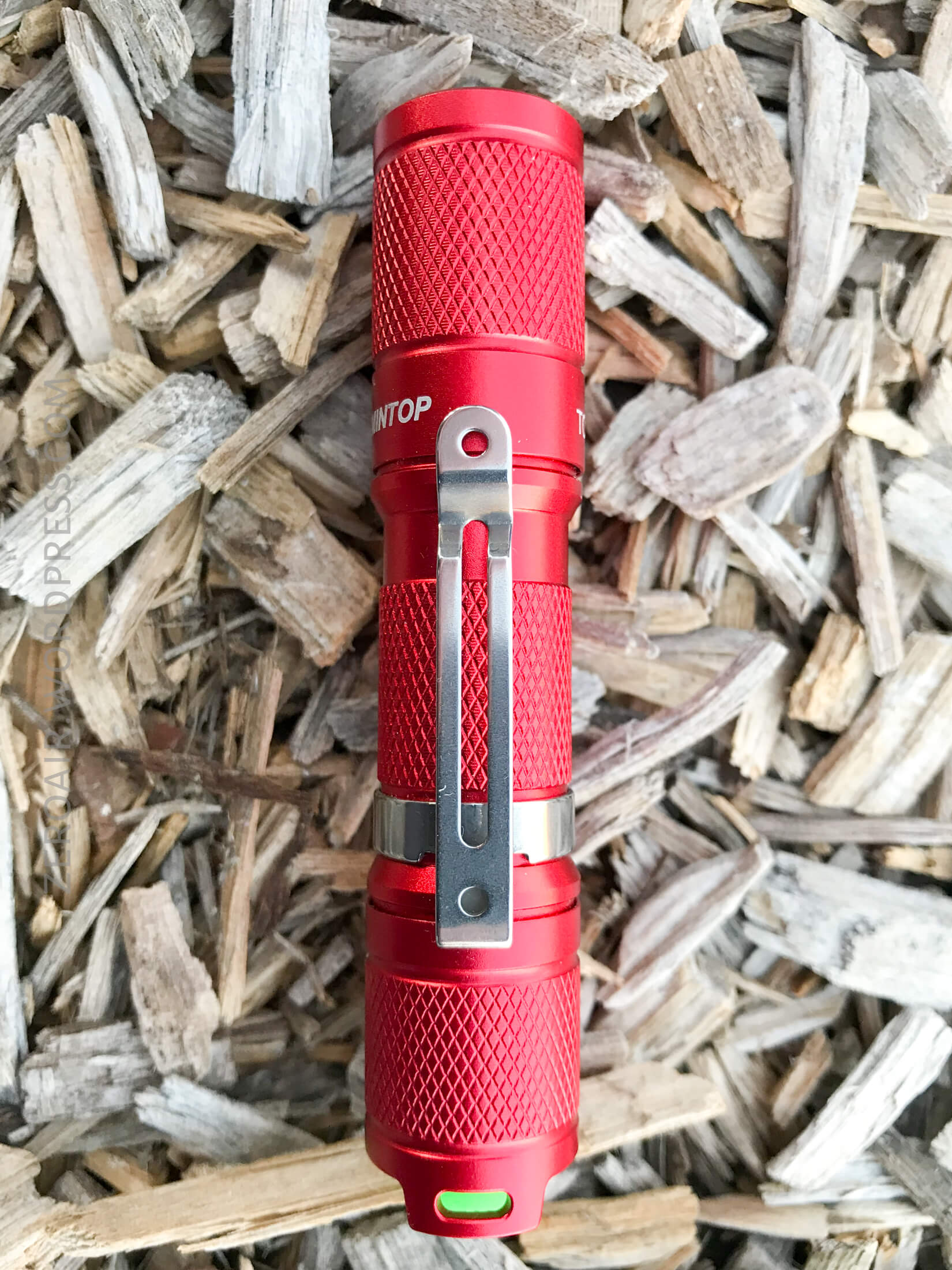 Also included (in the twisty cap) is a magnet.  It’s quite strong, and also I believe, removable. 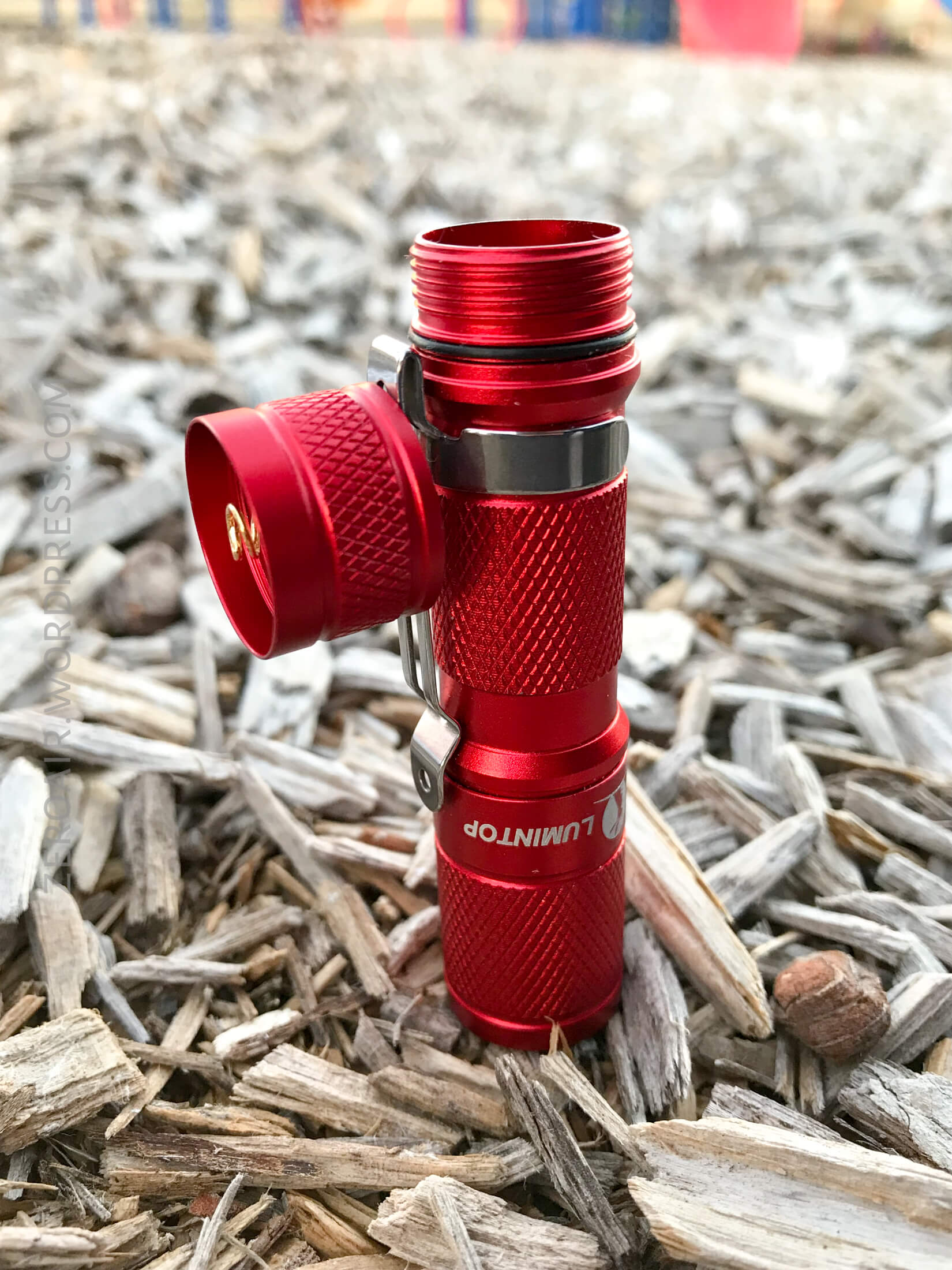 The Tool AA is powered by a single cell.  It’ll work with NiMH, Li-ion, and Alkaline.  I tested with only NiMH and Li-Ion.  A runtime may be seen below.  The light never really gets hot (or even warm).  The runtime with a 14500 is much brighter than the NiMH, but dies very quickly (45m or so). 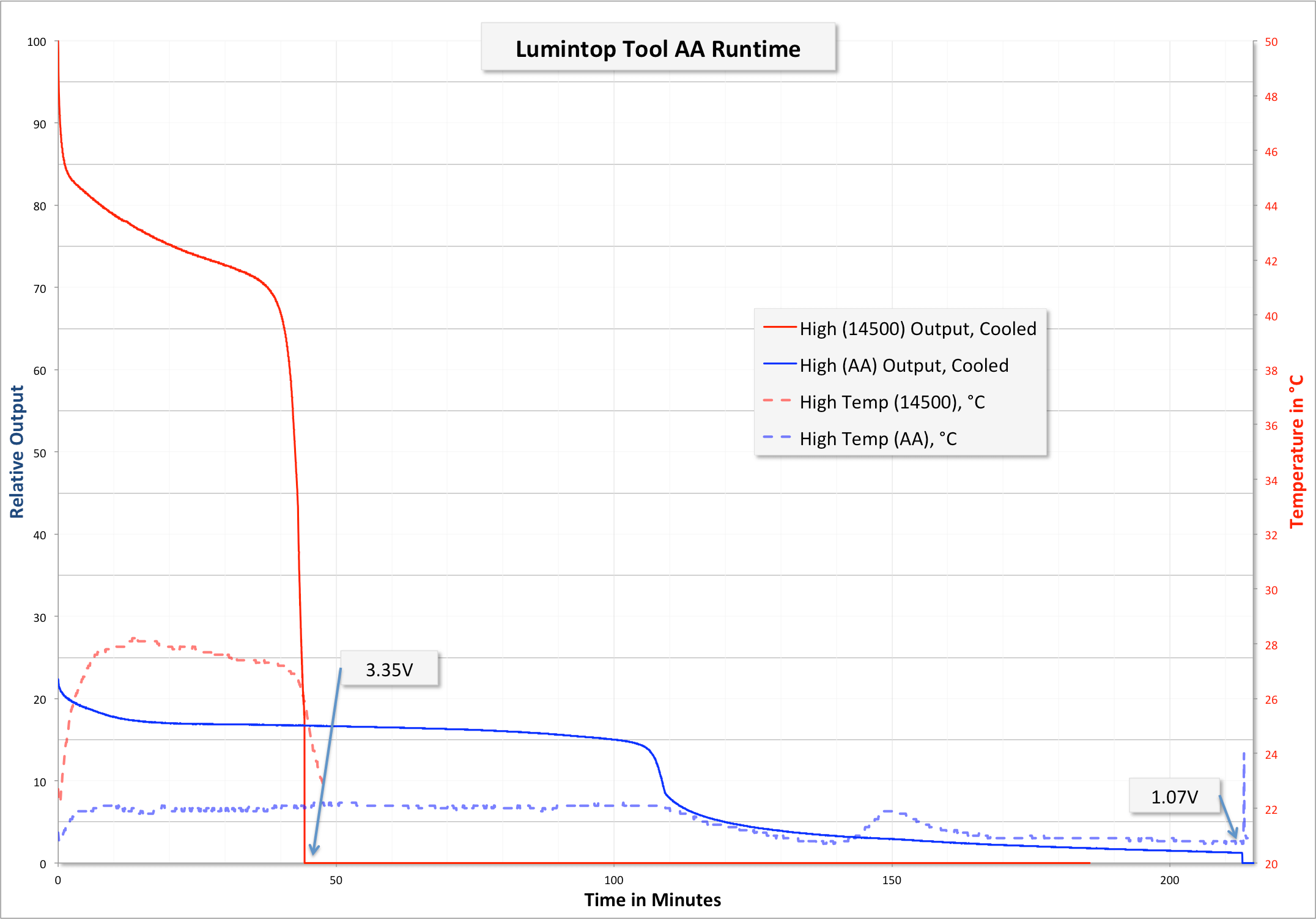 Two UI options are included with the Tool AA.  The clicky is installed in the package, and a twisty cap is included too.  They can’t be used at the same time.  The clicky is a reverse clicky.  For the size of the light, the button is actually quite large, and very accessible. 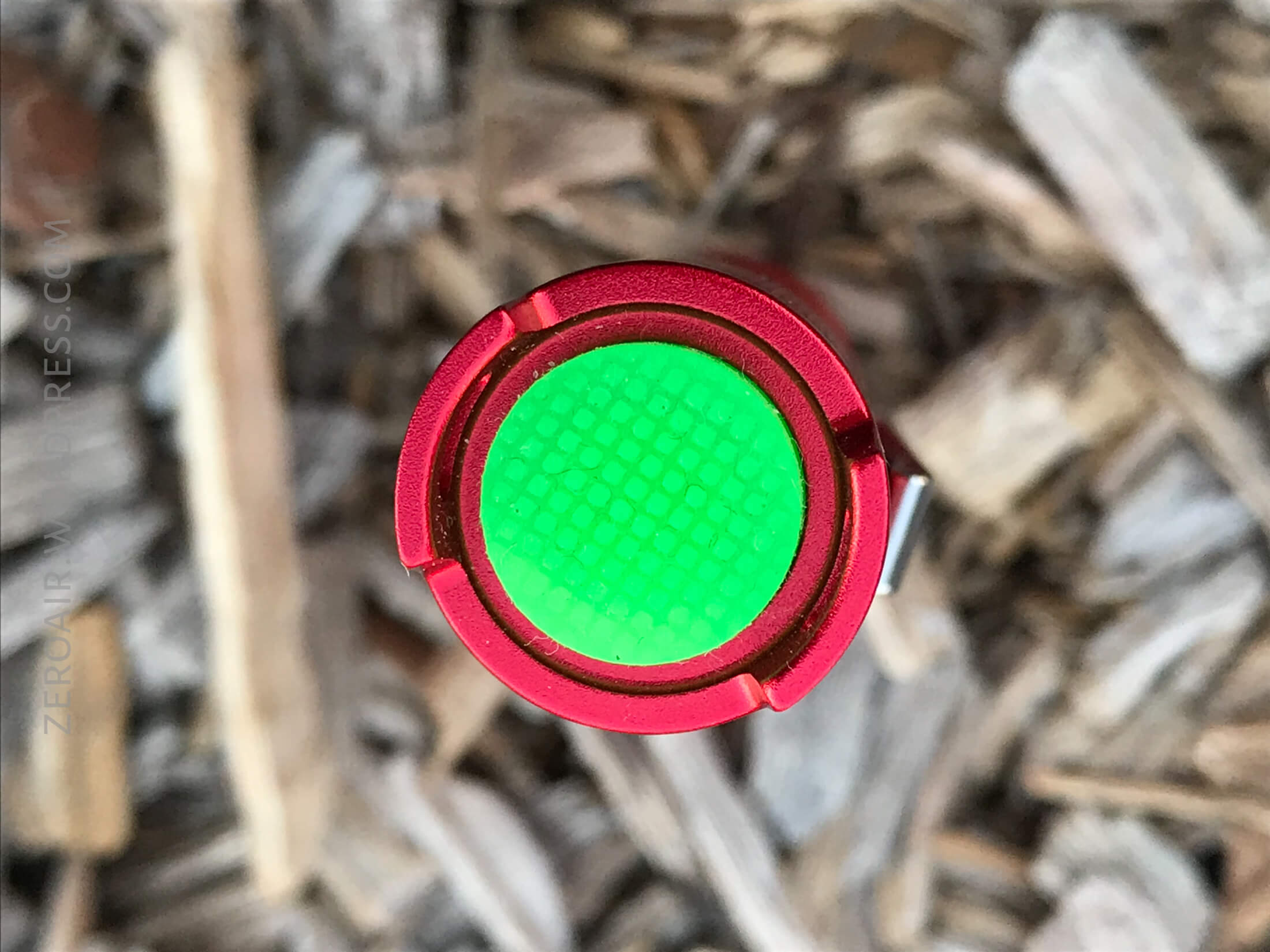 Lumintop describes the twisty UI to be “twist the head” of the light. But I tend to twist the tail instead; functionally there’s no difference.  The knurling doesn’t lend itself to one-hand operation. 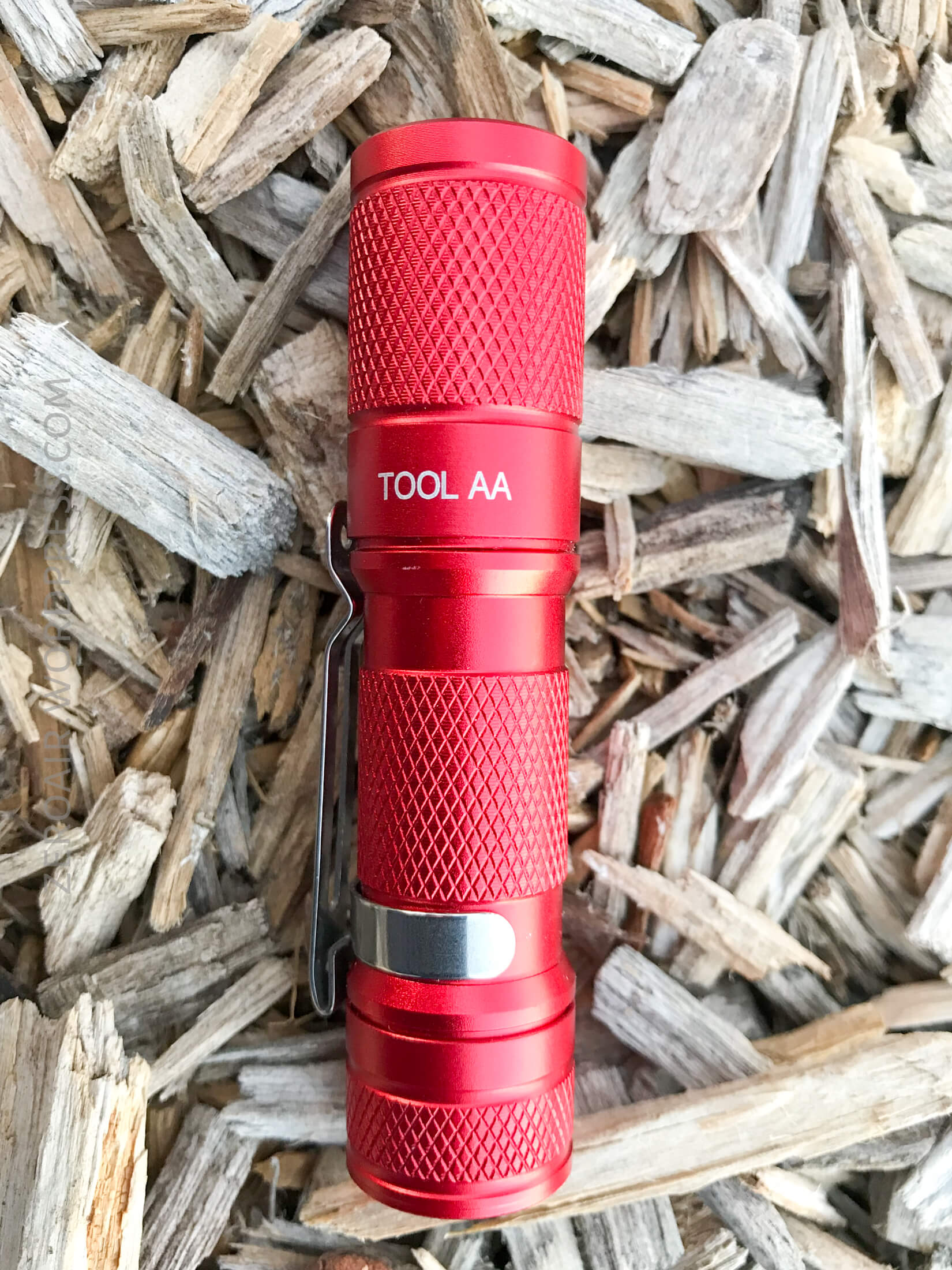 The UI is very simple, with only three modes and no strobe nonsense.

The emitter of choice is a Cree XP-L HD.  The reflector is smooth, and has a “middle depth” – not shallow, and not super deep.  The beam is mostly spot with little spill. 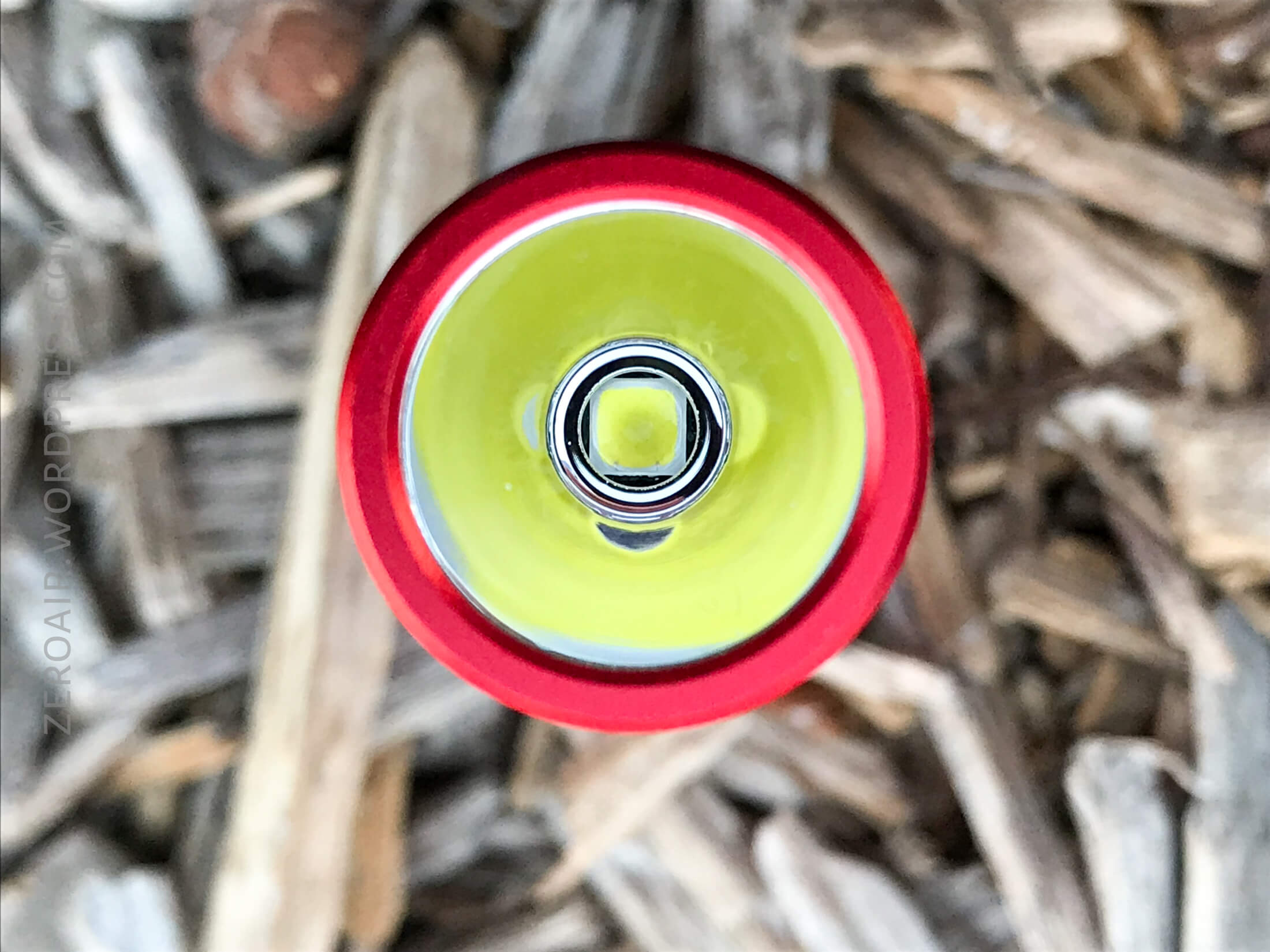 For lack of any better place to put the info, Lumintop also includes this GITD diffuser, which fits snugly over the front of the light.

These beamshots are always with the following settings: f8, ISO100, 0.3s shutter, and manual 5000K exposure.

Next the AA output. 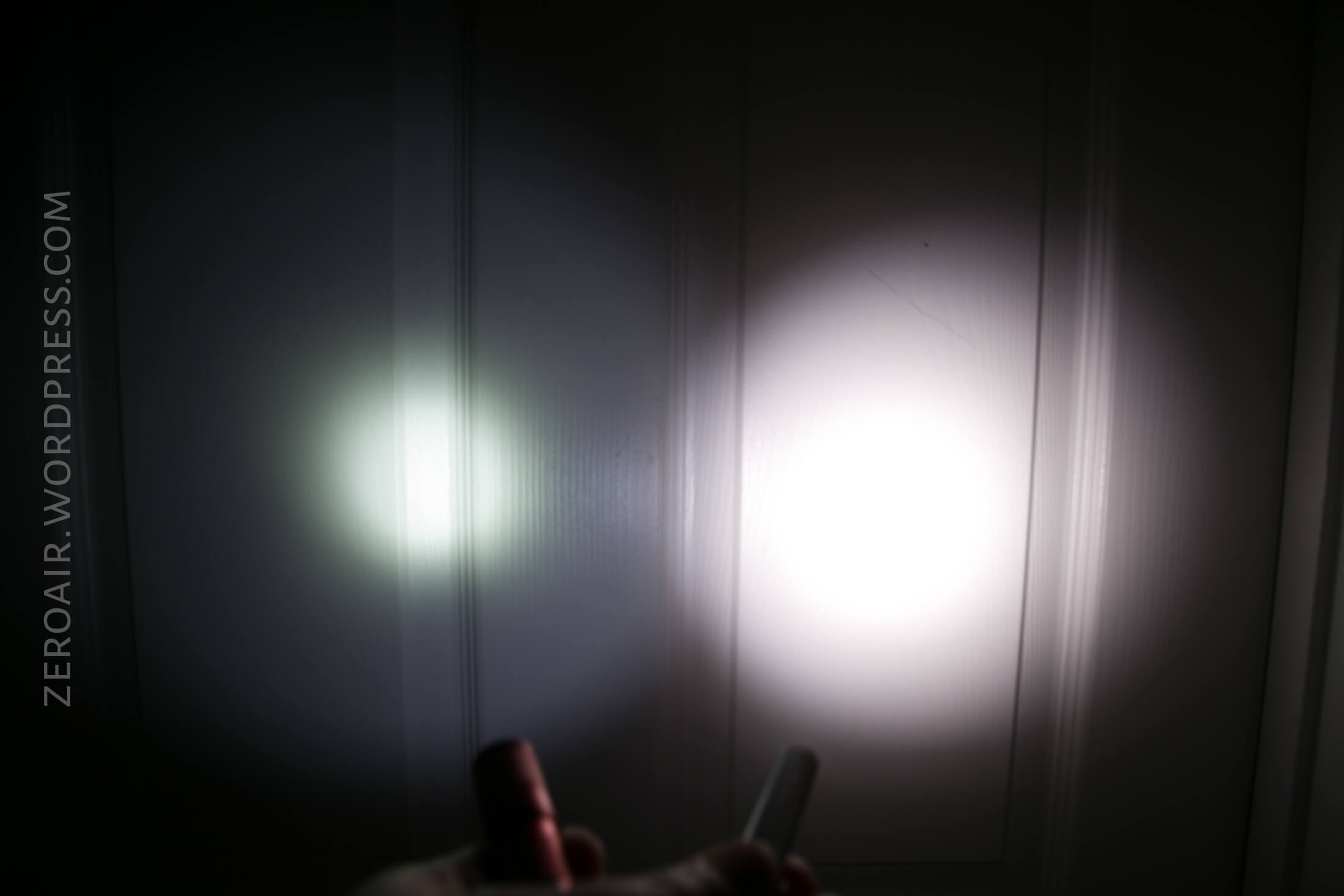 Here’s a relevantly filtered page on parametrek.com.   Double-A lights with an XP-L HD – this isn’t going to be a small list.  However, the full package with both UI options (two tailcaps) separate this light.  Also, these available colors are quite… unusual.  The red is really quite striking!

Most likely I’ll wrap the MecArmy SGN7 by Wednesday, and hopefully the Olight X7R for Friday.  I hope to have a thing or two (blog only) in the meantime, too!