The Weltool T11 Demon Carver flashlight features an Osram emitter and just an absolutely massive throw. Read on for testing!

There is only one version.

The T11 is going for just over $100 right now and can be purchased on amazon.  I’ve just joined Amazon affiliates – that’s my first Amazon affiliate link.  I have no idea how it works, but I’ll receive a little if you purchase from that link.  I’d appreciate it greatly!

I measure the throw on this light much higher than rated, and it’s already rated very high.  This thing throws ridiculously.  Just crazy throw from a single 18650 light. 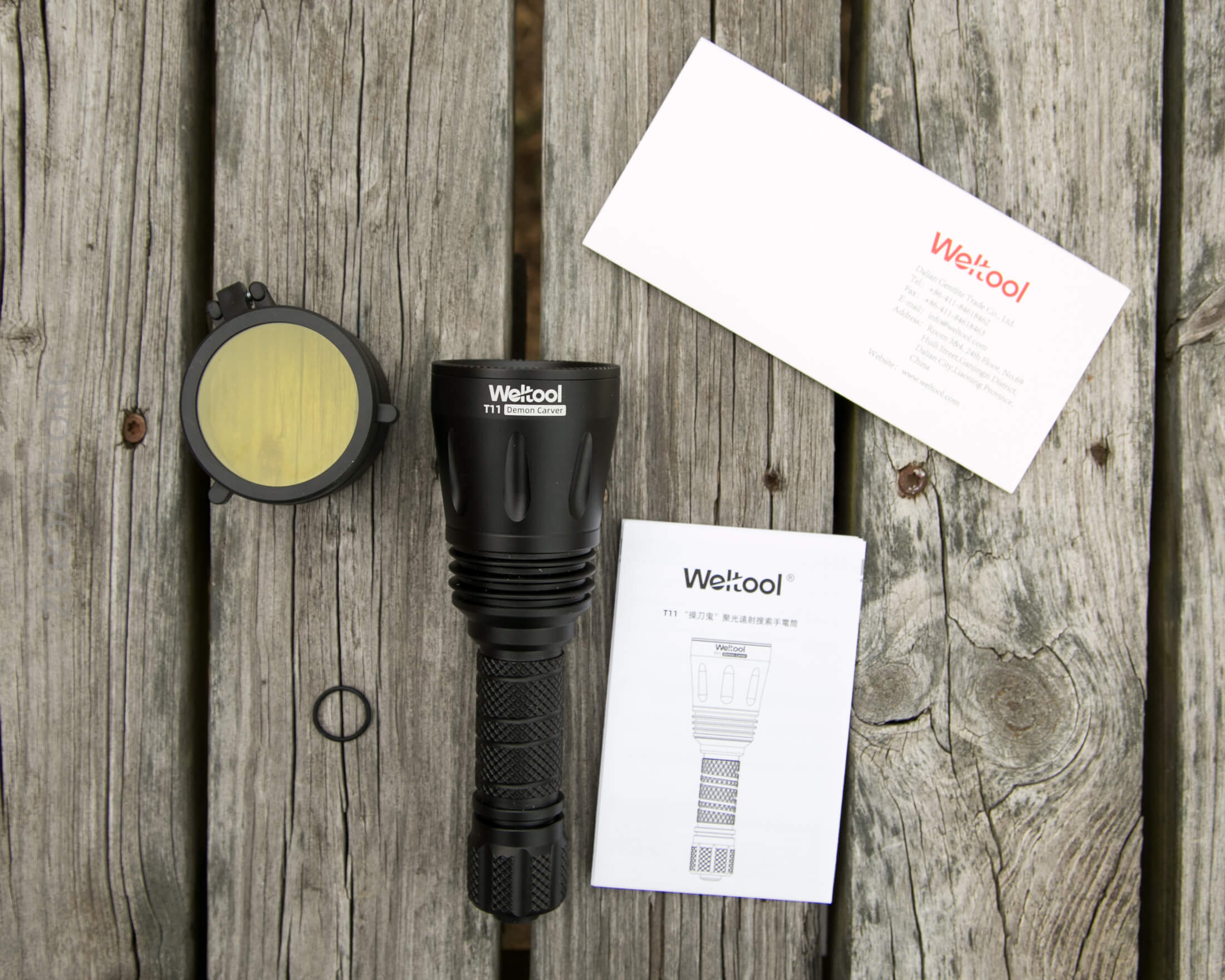 The T11 ships in a cardboard box.

The manual is fine.

Weltool is one of those brands I see a lot of on Facebook… That…. is usually not a good sign for most lights.  So to be honest, I wasn’t expecting much out of this light.

But I stand corrected.  This light is very well built and has some nice appointments that I didn’t foresee.

The tailcap in particular was one of those things I thought would be poor quality.  It’s not.  The size and knurling make it very easy to unscrew, and it’s smart to have the knurling here.  Also the larger diameter of the tailcap isn’t a negative – this isn’t a light you’ll pocket anyway. 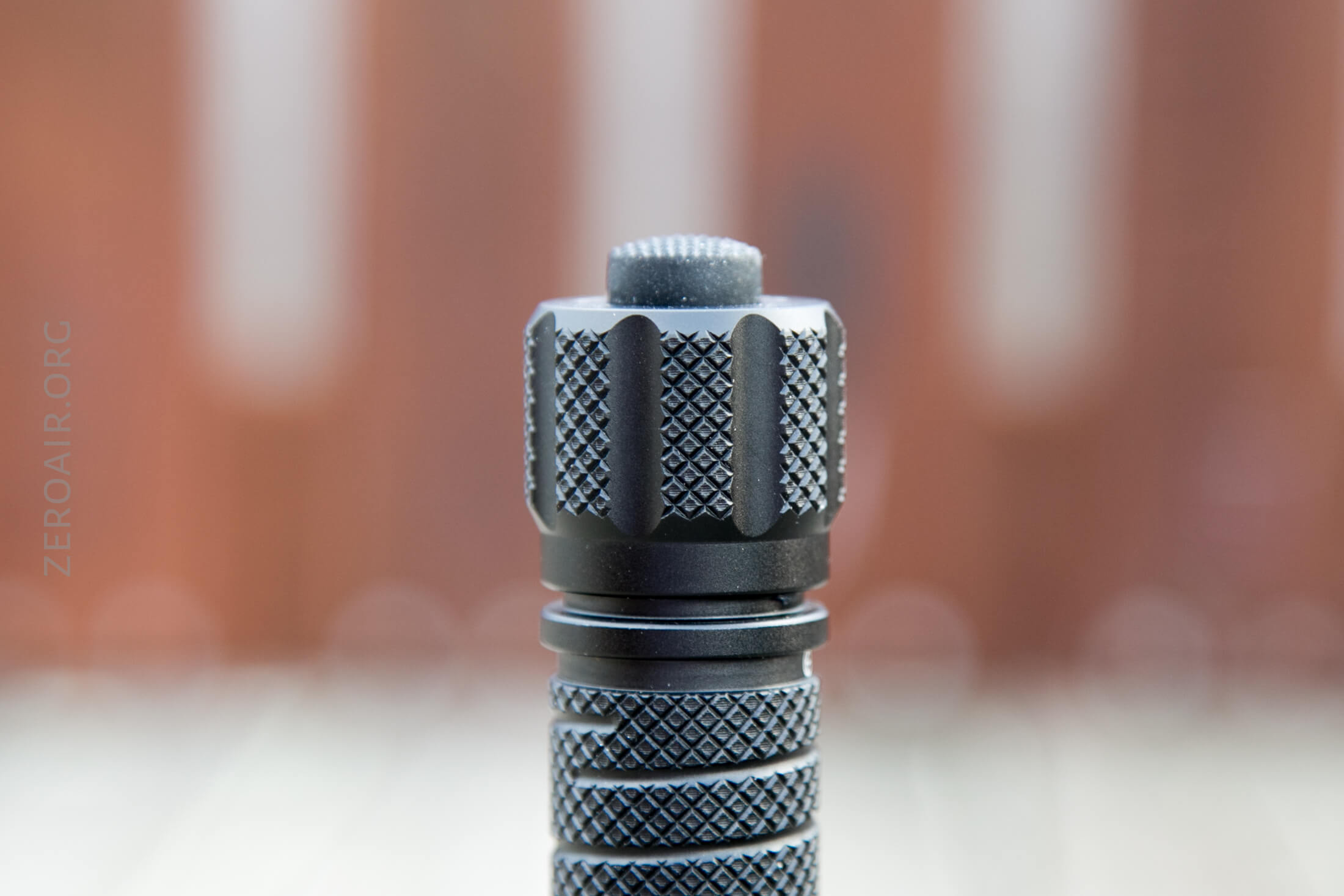 The body has the same knurling, and it’s worth mentioning that the knurling (diamond pattern, my favorite) is very consistent, grippy, and also not sharp in the least. 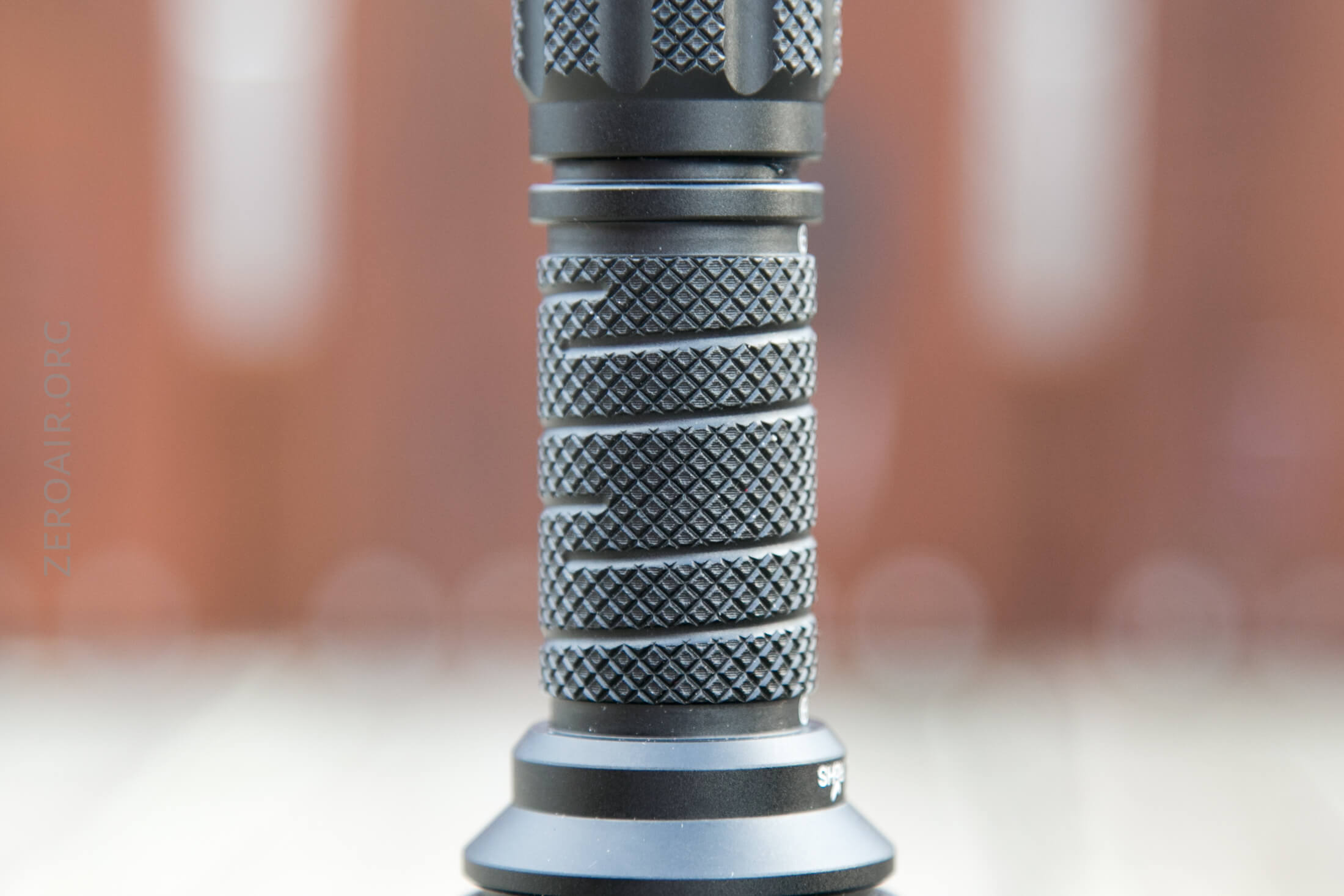 The head has some cooling fins 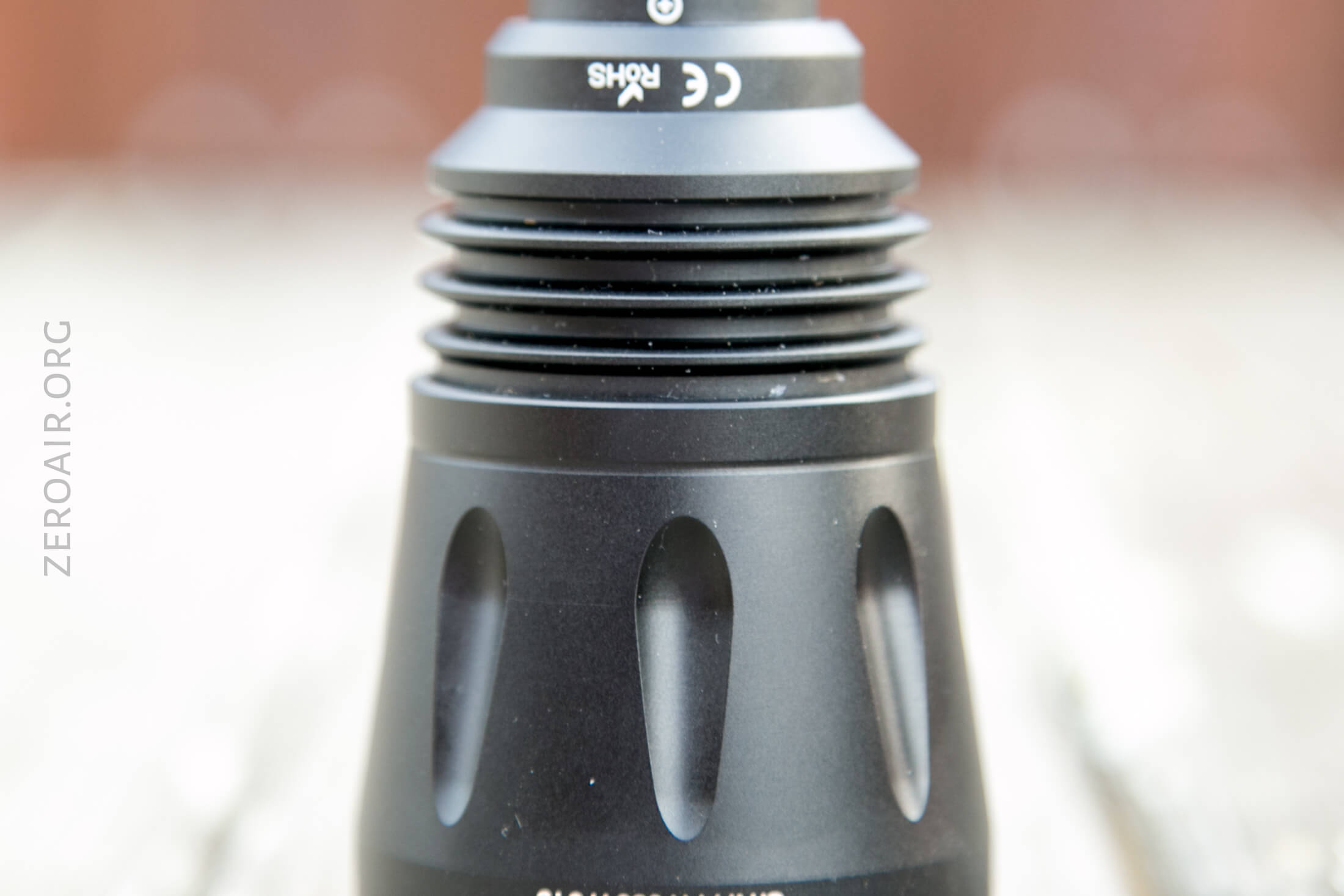 The threads are square-cut anodized, and well lubed.  This allows mechanical lockout past what the mechanical switch offers. 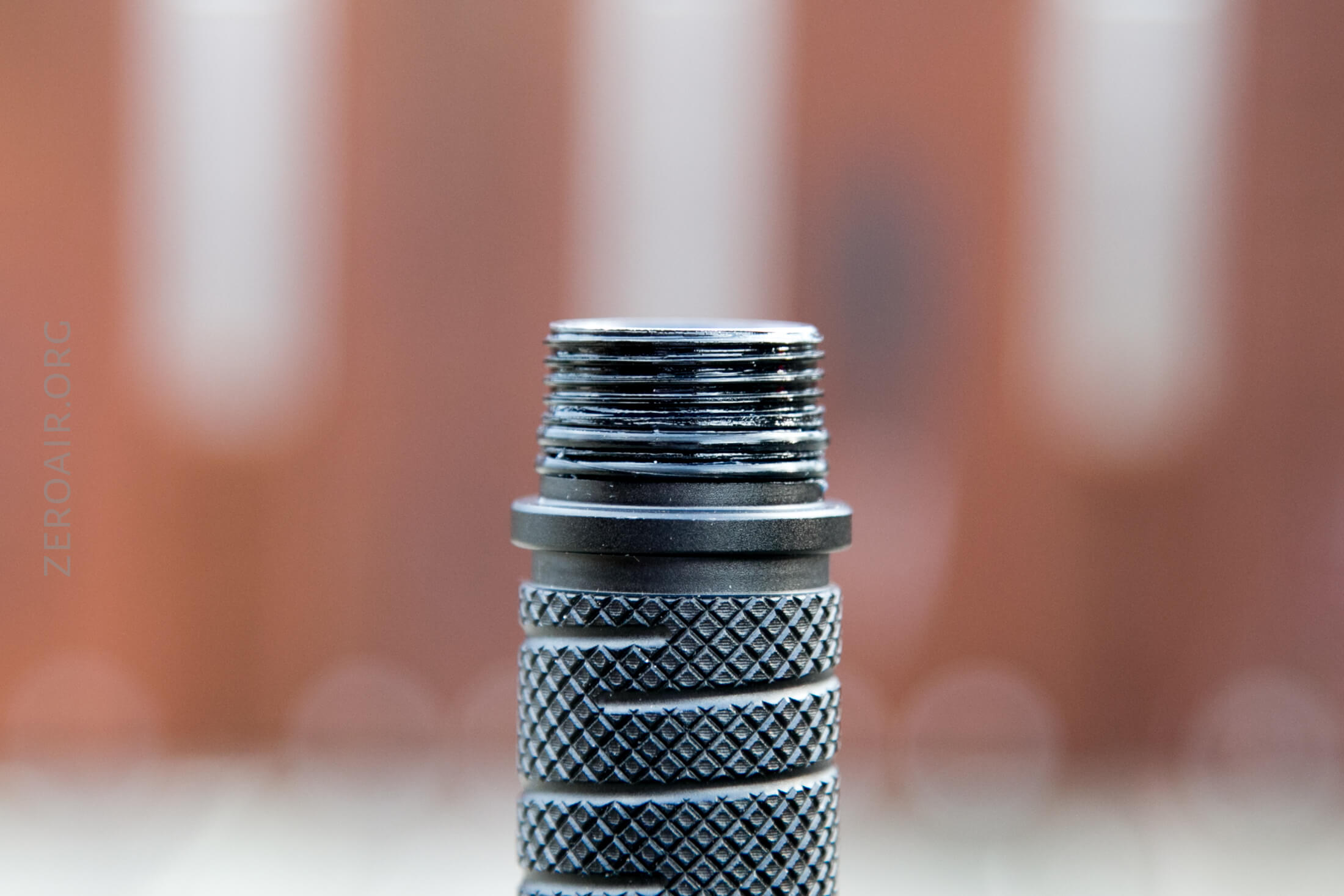 Both the head and tail have springs.  The tailcap can be disassembled easily since the parts are held in with an aluminum retaining ring. 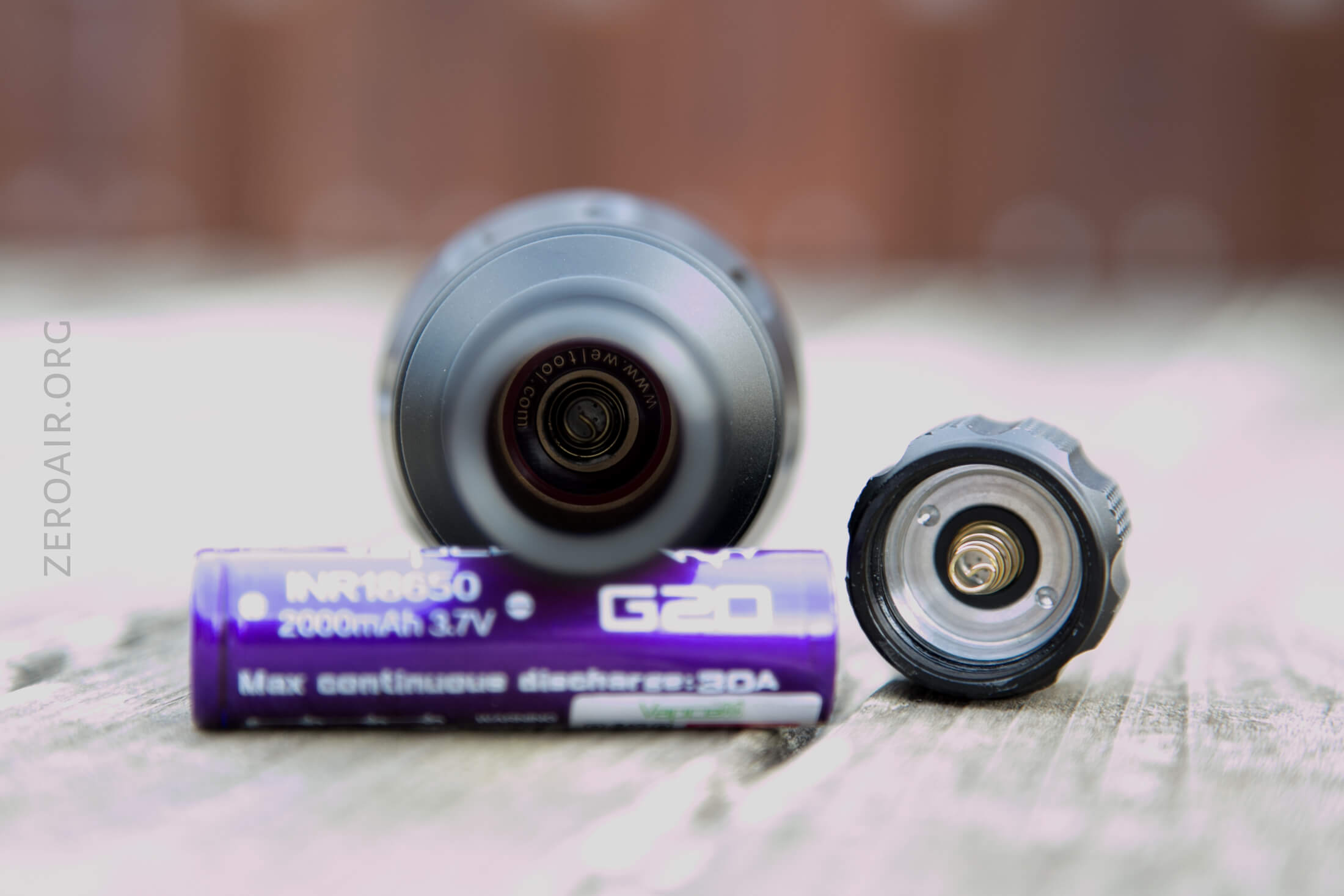 I was not able to remove the head from the body, or the bezel from the head.

The body has marks on the outside showing proper cell orientation.  As usual, the positive end goes toward the head. 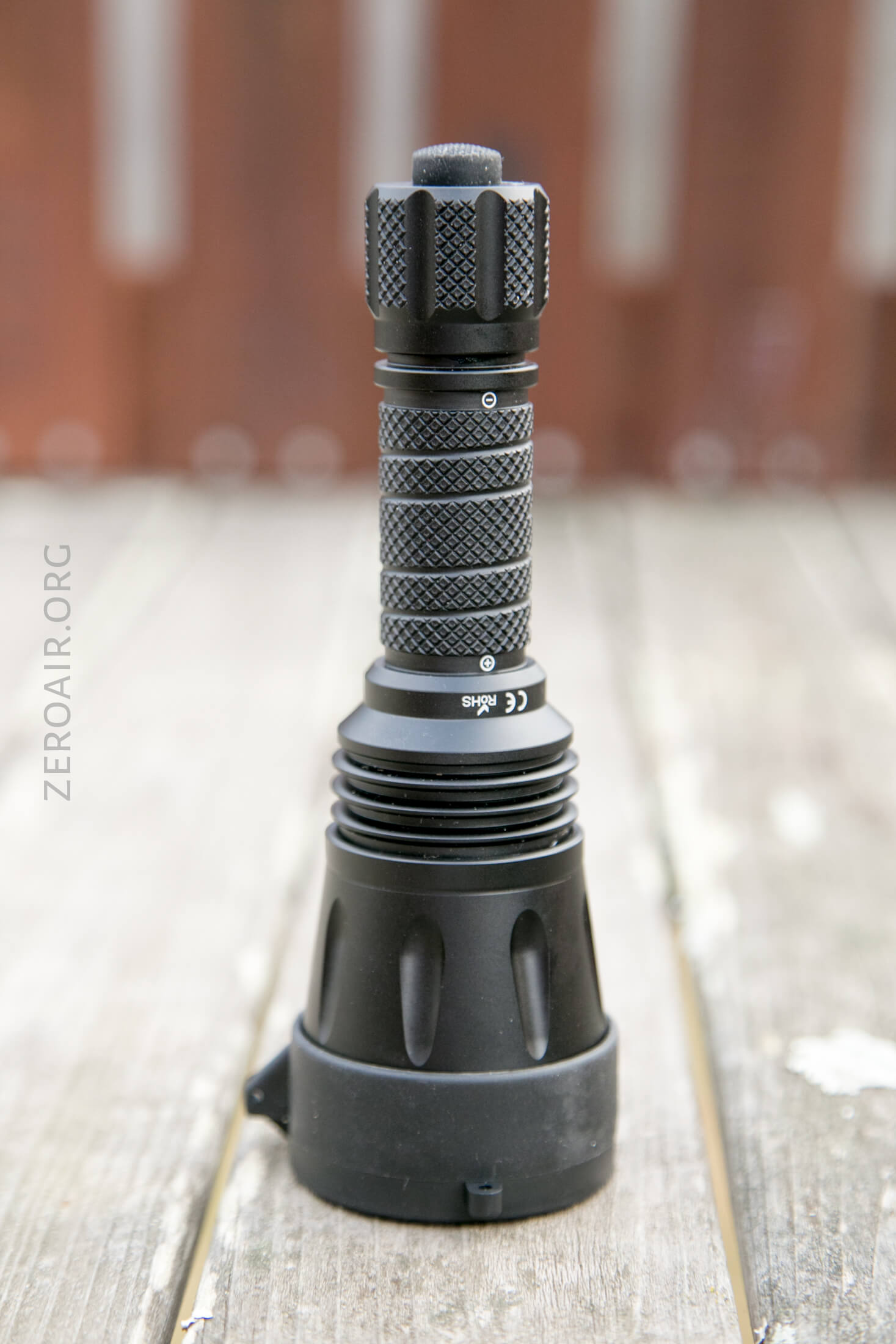 Also included is this slip-fit lens cover.  This turns the output yellow, which I presume is useful in hunting some wild animals. 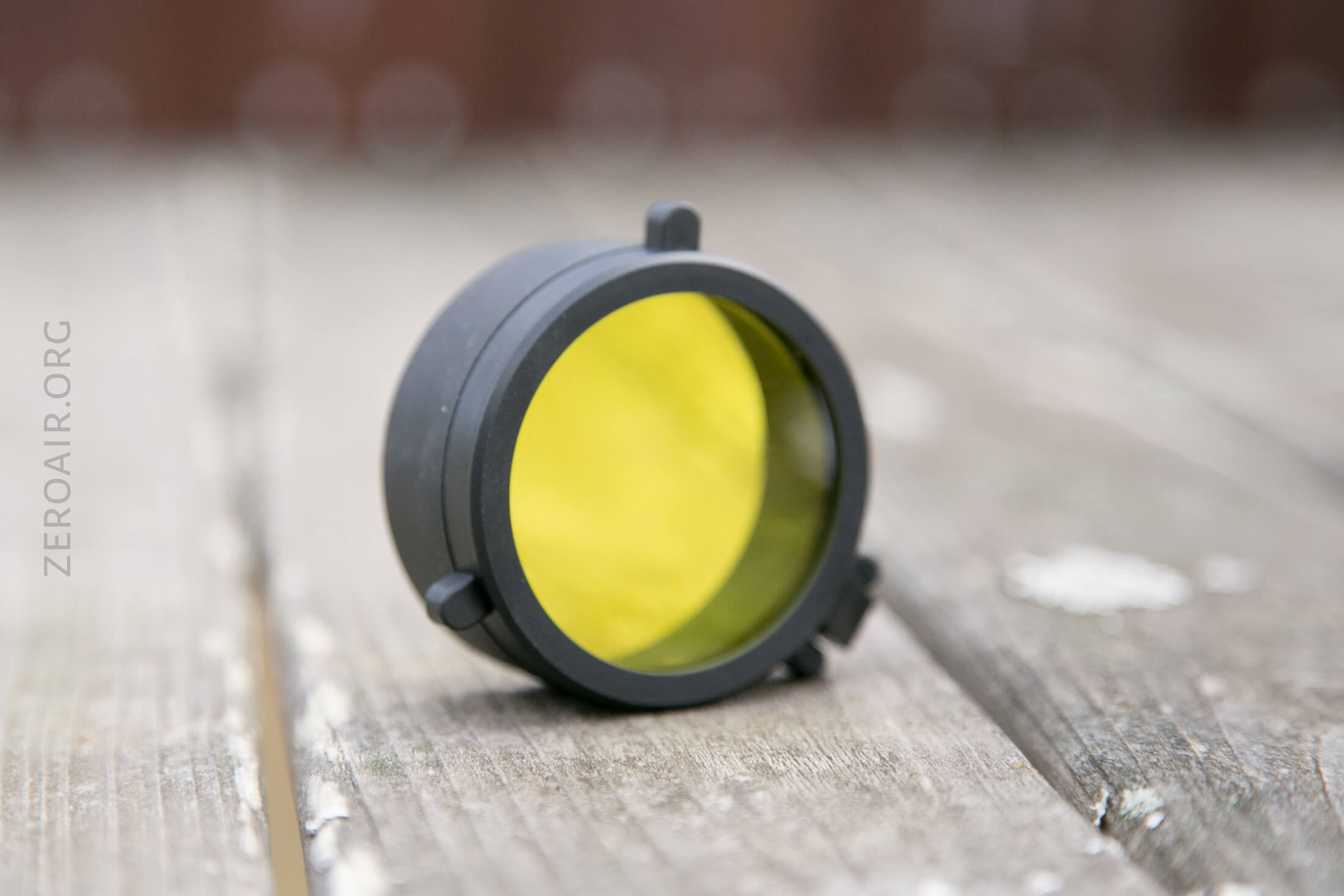 The fit of this cover is very good, and it serves nicely as a protective cover for the lens. 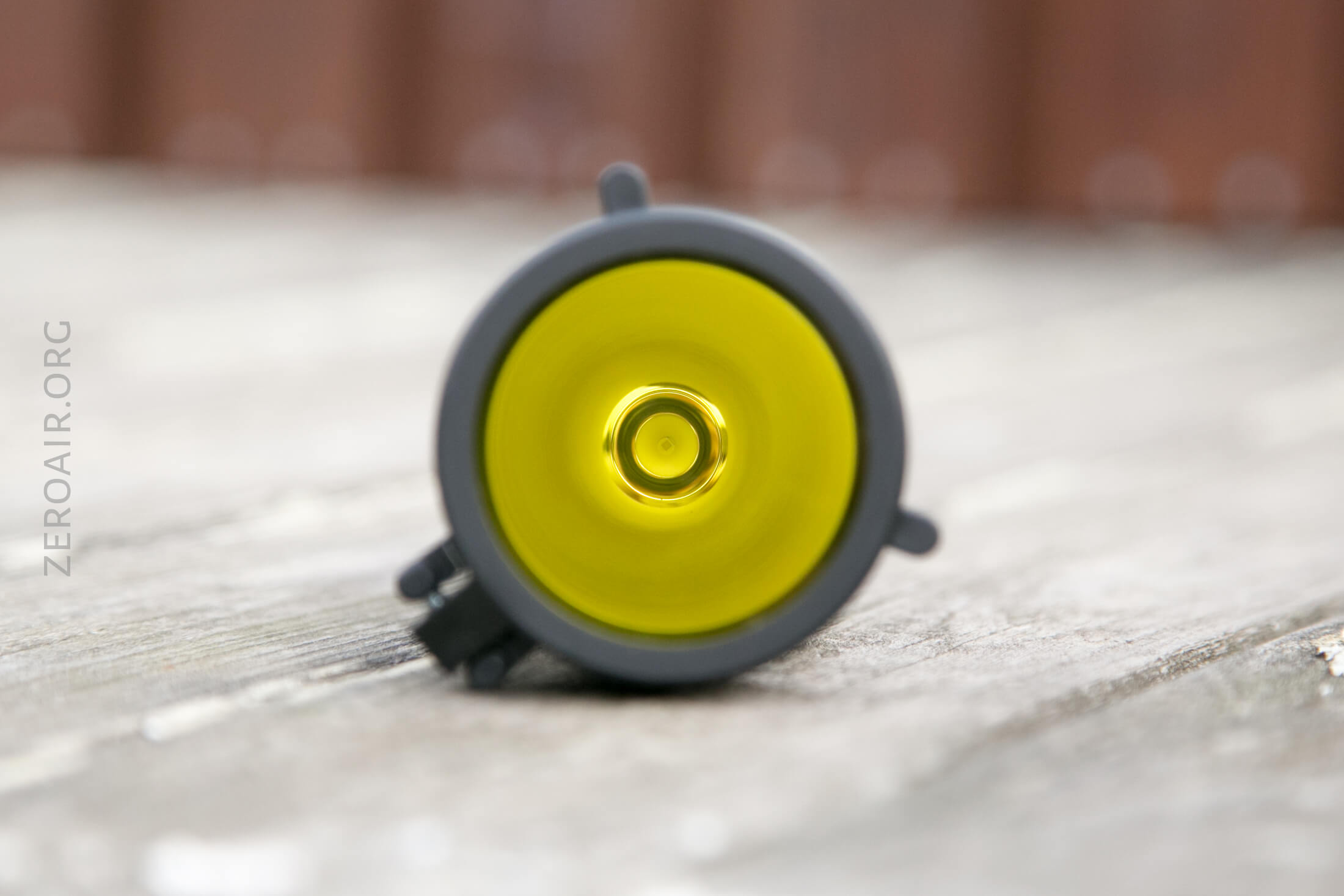 The cover flips open, for easy switching between yellow and white output. 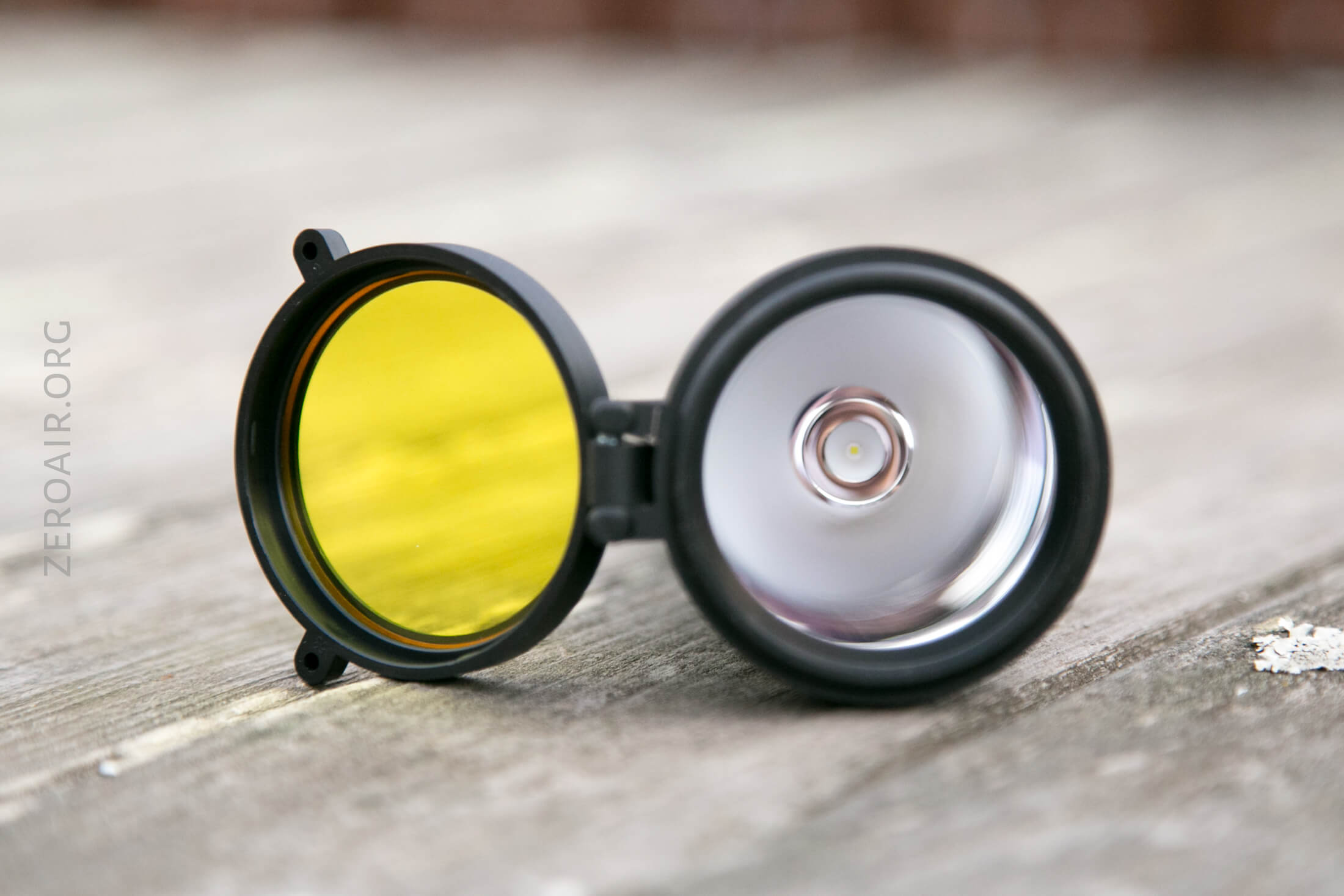 And when I say “flips open” I mean it.  It’s like an automatic knife.  Once you get this cover-up past a certain point, it flings open.

This is a good size for a handheld thrower.

Nothing is included for carry of the T11.  No lanyard (and no place to attach one).  No pouch.  No pocket or belt clip, though there seems to be room on the tail end of the cell tube for a very thin friction fit clip.

Basically, roll your own carry method for this light.

The T11 is powered by a single 18650 cell.  With both ends having springs, any type of 18650 will work.  The power requirements for this emitter aren’t that great, so really any 18650 would be fine in this light.  I’ve tested here with a low capacity, high current Vapcell G20, but a high capacity lower current cell would be a good solution, too.

Here’s a runtime on High.  I didn’t hit the output specs, but as throwy as this light is, I chalk that up to my PVC tube not responding well to such throw.  Either way, I’m not sweating the output, because the light hits the throw specs (and throw is much more important on this light).

Note a couple of probably surprising things.  First, the output after an initial drop is very well regulated.  Secondly, the light does have LVP.  The stepdown is not good, but the regulated output for almost an hour is. 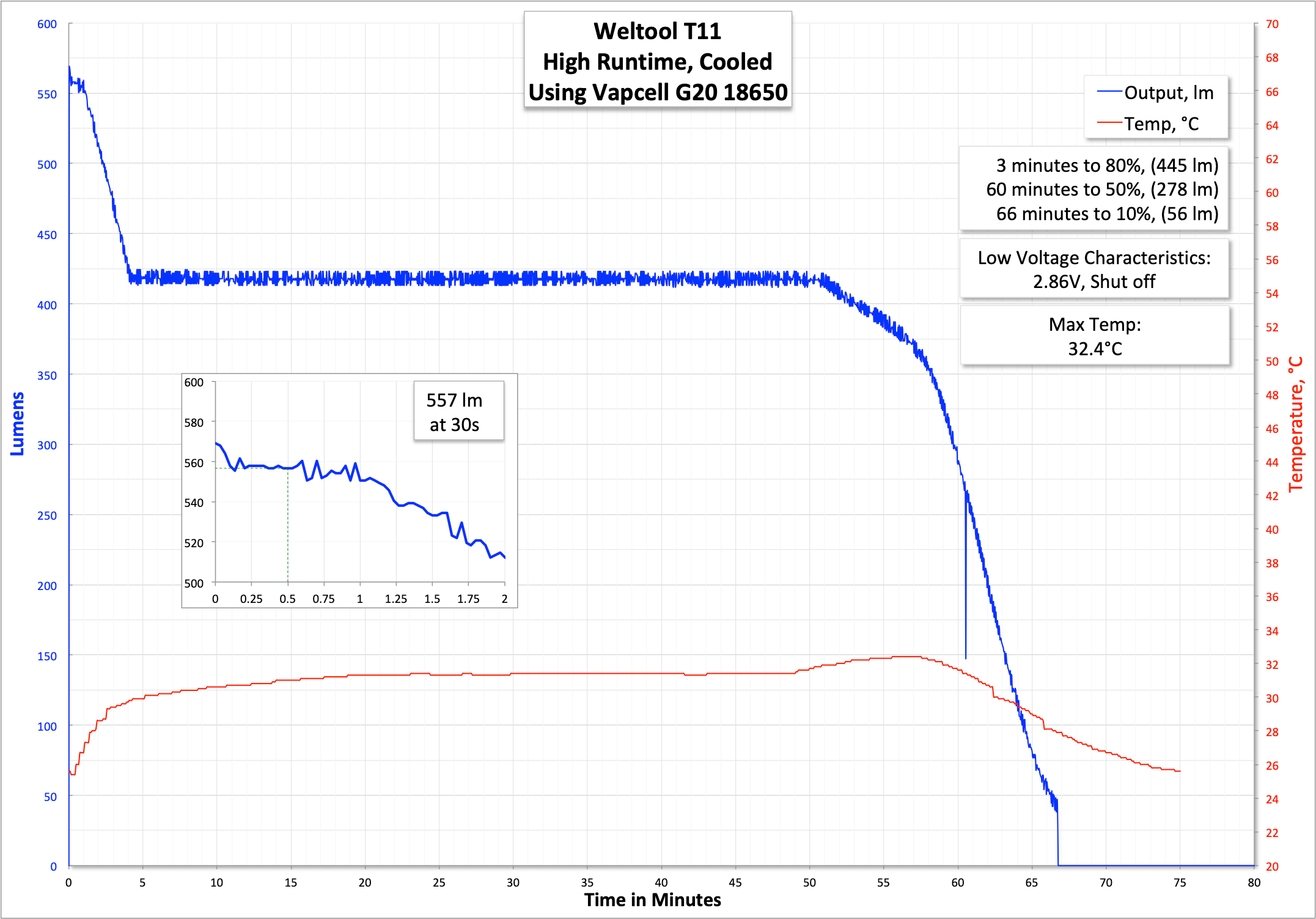 Output on Low is very flat, and extremely well regulated.  Worth noting here is that I measured throw on Low to be 611m.  So throwing 611m for over 2 hours – that’s probably some kind of record, and certainly for this class light. 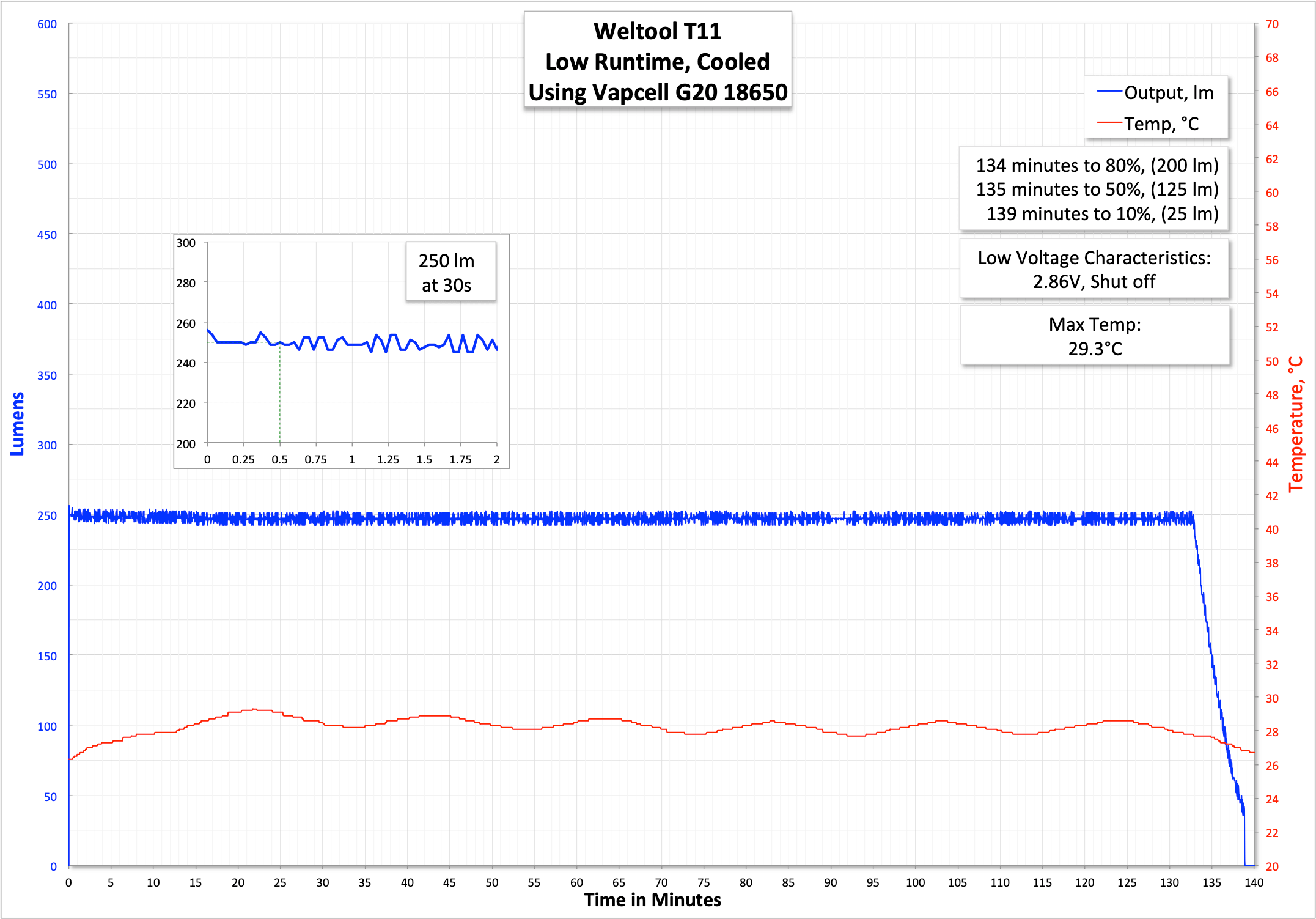 At around 3V, the main (aka only) emitter flashes a voltage warning.  At around 2.5V, the light is electrically off.

You might wonder how the yellow cover affects throw?

So the cover brings throw down, sure, but 524/777m is still very throwy for this class.

No PWM on either mode.

There’s a single switch on the T11.  It’s a mechanical forward clicky.  The switch is very proud, which means easy access with or without gloves but also no tailstanding.

As far as I can tell none of the product documentation indicates what emitter is in this light.  I contacted the sender, and he said it’s an Osram Ostar Projection Compact.  I know nothing about this emitter, including if this is actually the spec sheet for it.  I think this one is sometimes actually used in projectors (hence the name).  So my best guess is this:  OSRAM OSTAR® Projection Cube, LCG H9RM. 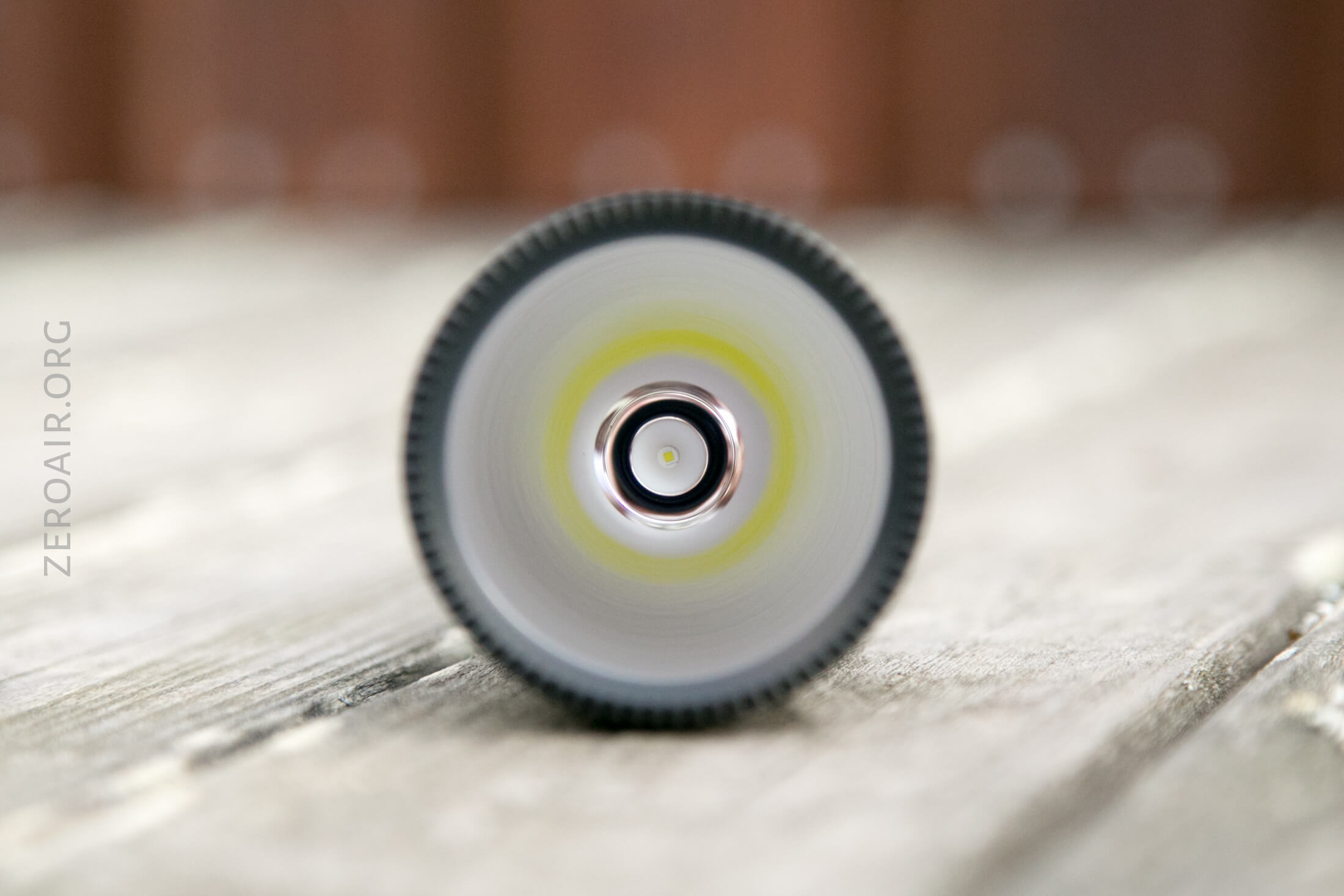 Ultimately the point is that the emitter is very tiny which helps make tons of throw.  And this light has the tightest pencil-thin beam I have ever seen. 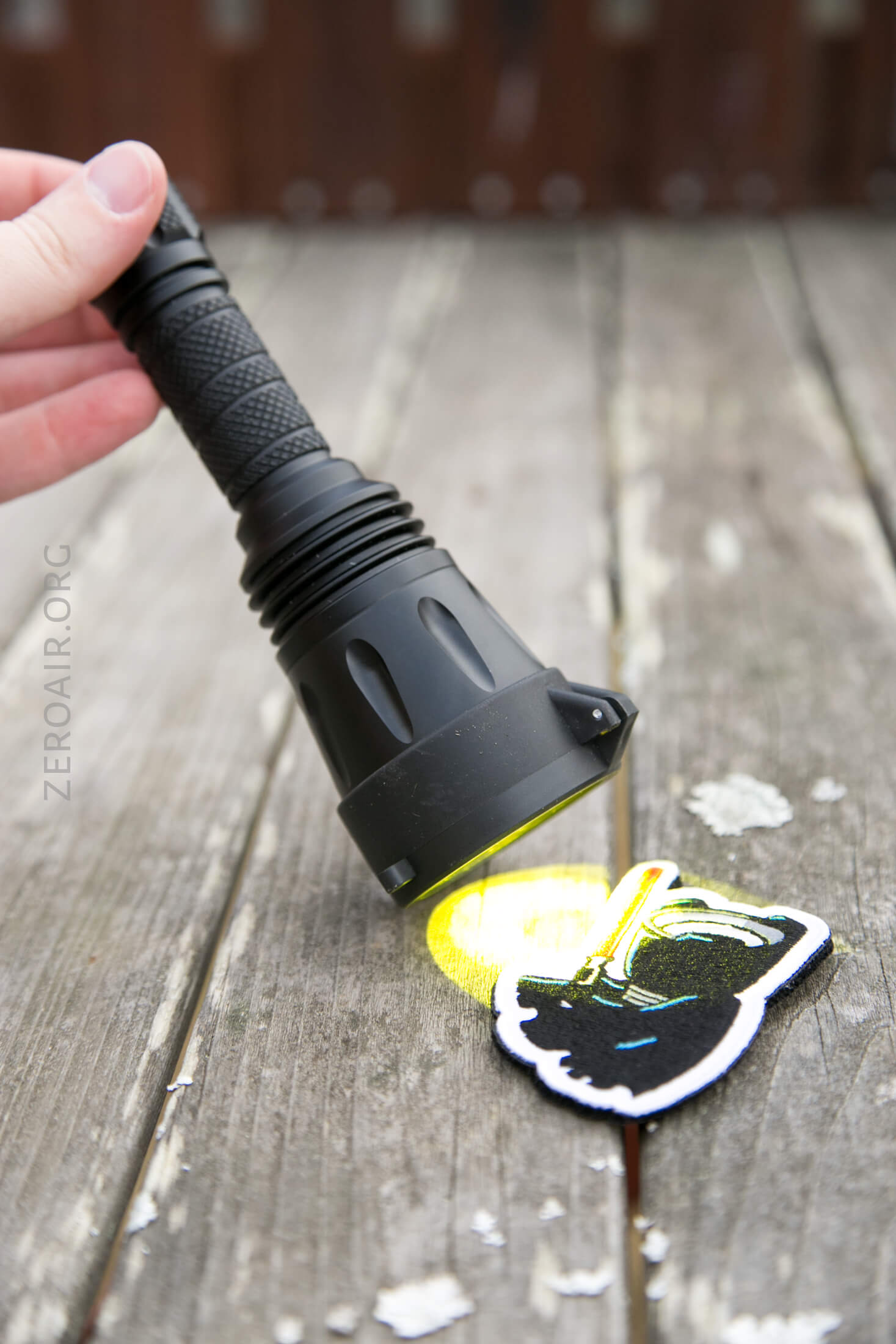 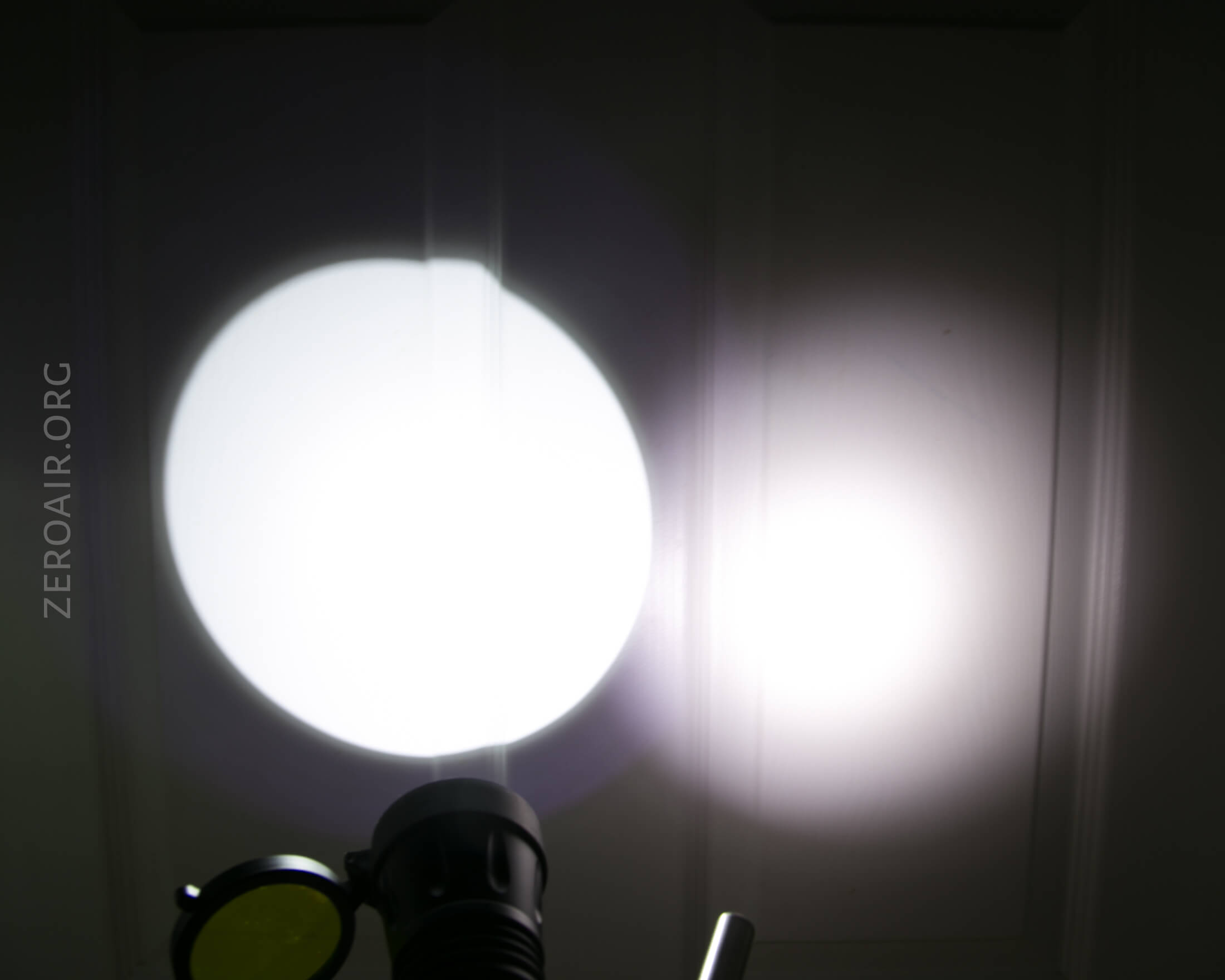 Hard to show this since even Low is high enough to wash out the comparison.  I find the tint to be very acceptable though.  I’d put it in the 5500K range. 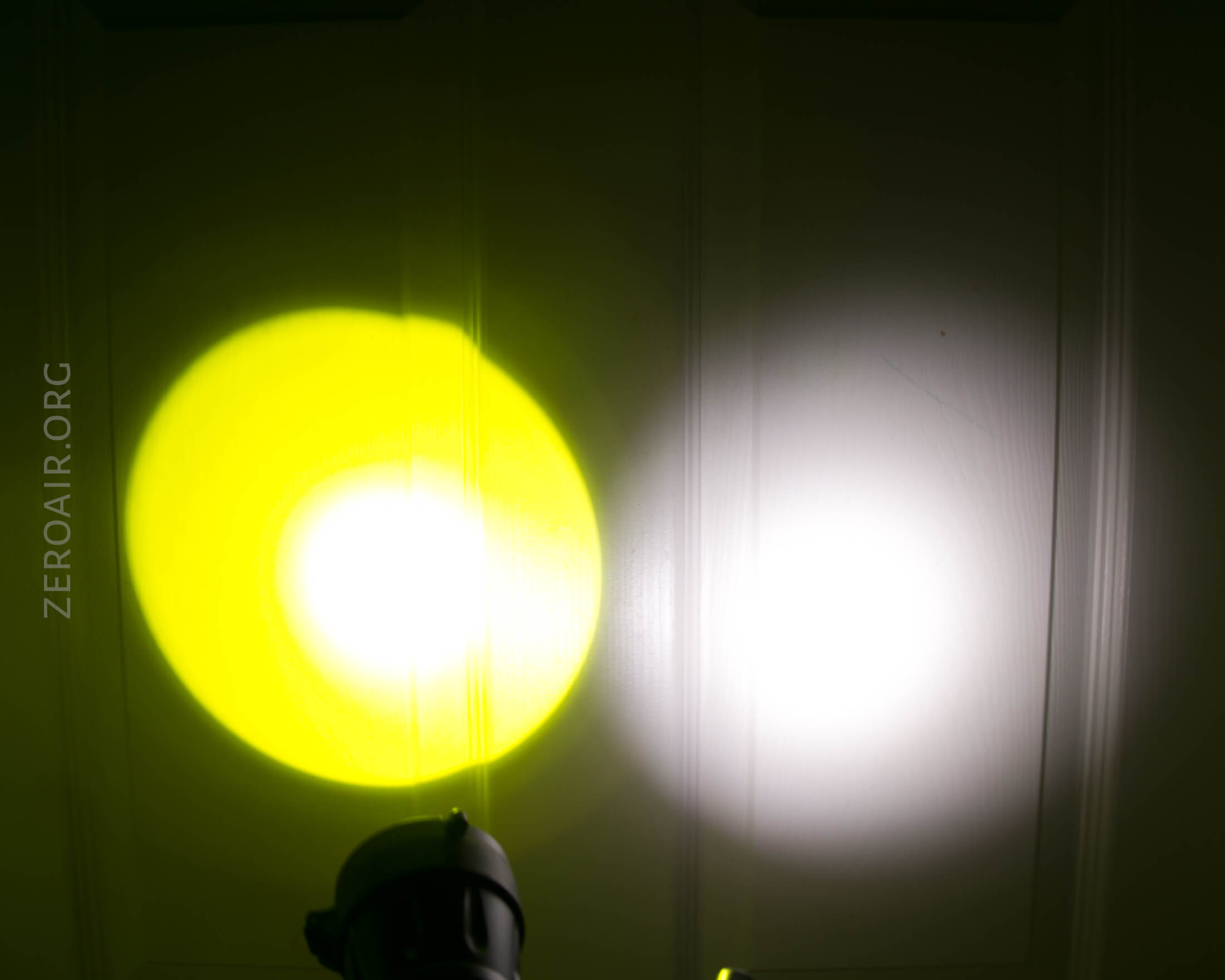