Today I have in my hands a little light from Acebeam that packs quite a throwy punch!  The E10 is a 26350 cell dedicated thrower, and quite a little thrower it is.  Read on for some testing and thoughts.

There is only one body type available, but three emitters are offered.  Osram white (seen here), Osram Green, and Osram Red.

These list for $57.30.  Buy yours at KillzoneFlashlights when they’re available! (referral link)

For the price of $57, there is a lot of fun to be had with this light.  So I have to say, you should definitely buy this light.   I don’t often suggest so wholeheartedly, but …. wow is this fun. 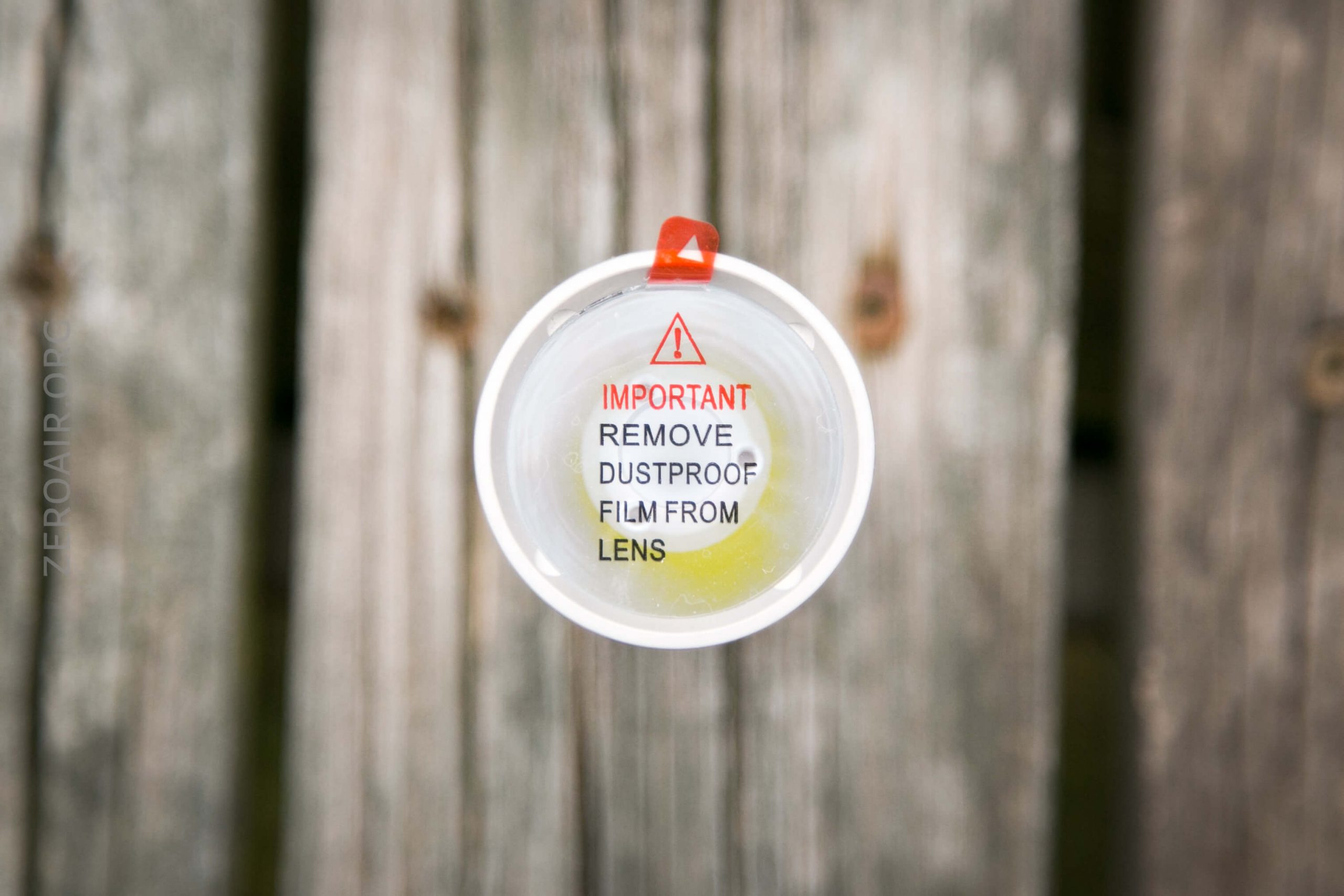 The E10 is a nice sturdy little light. 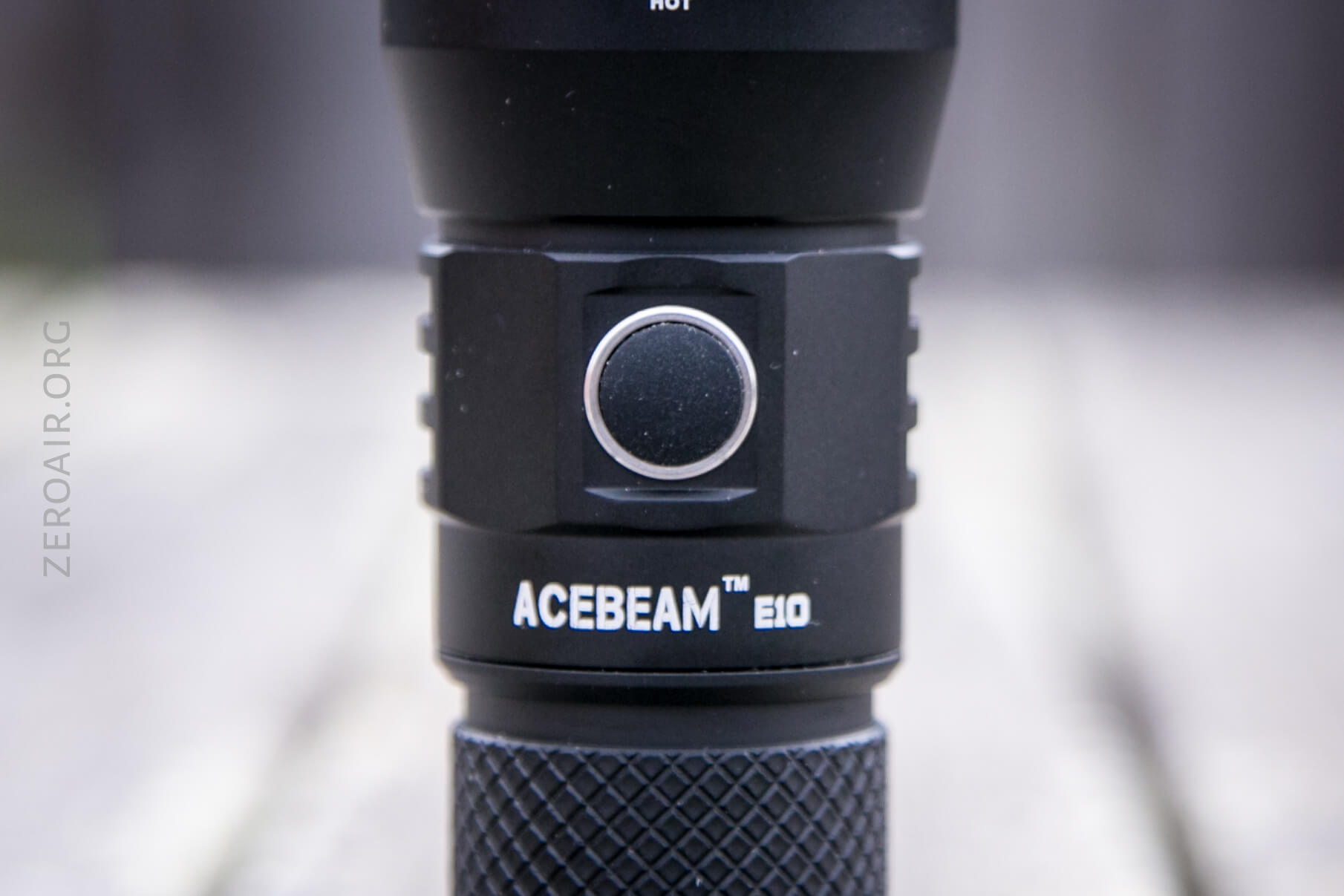 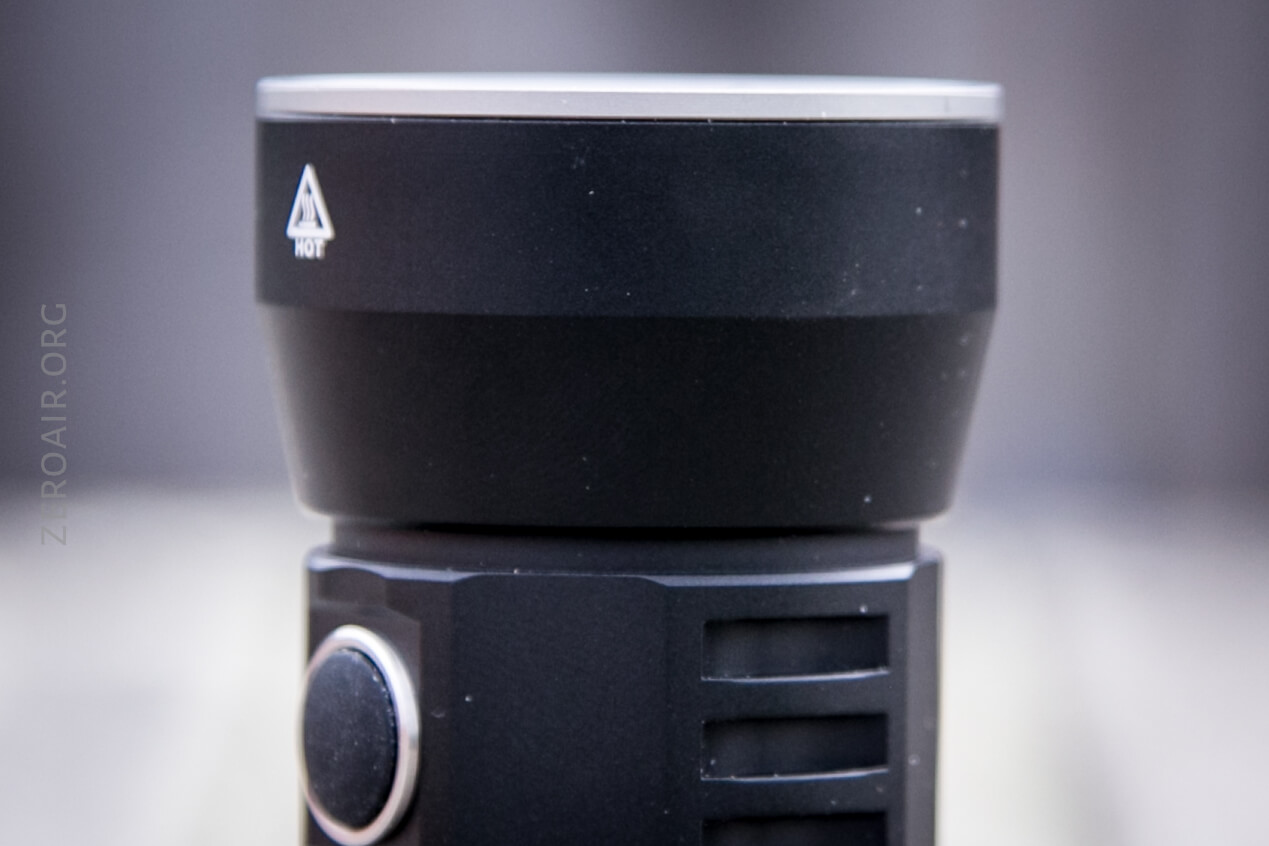 The knurling is good – This is the type of knurling Acebeam uses almost always, so … it’s good stuff. 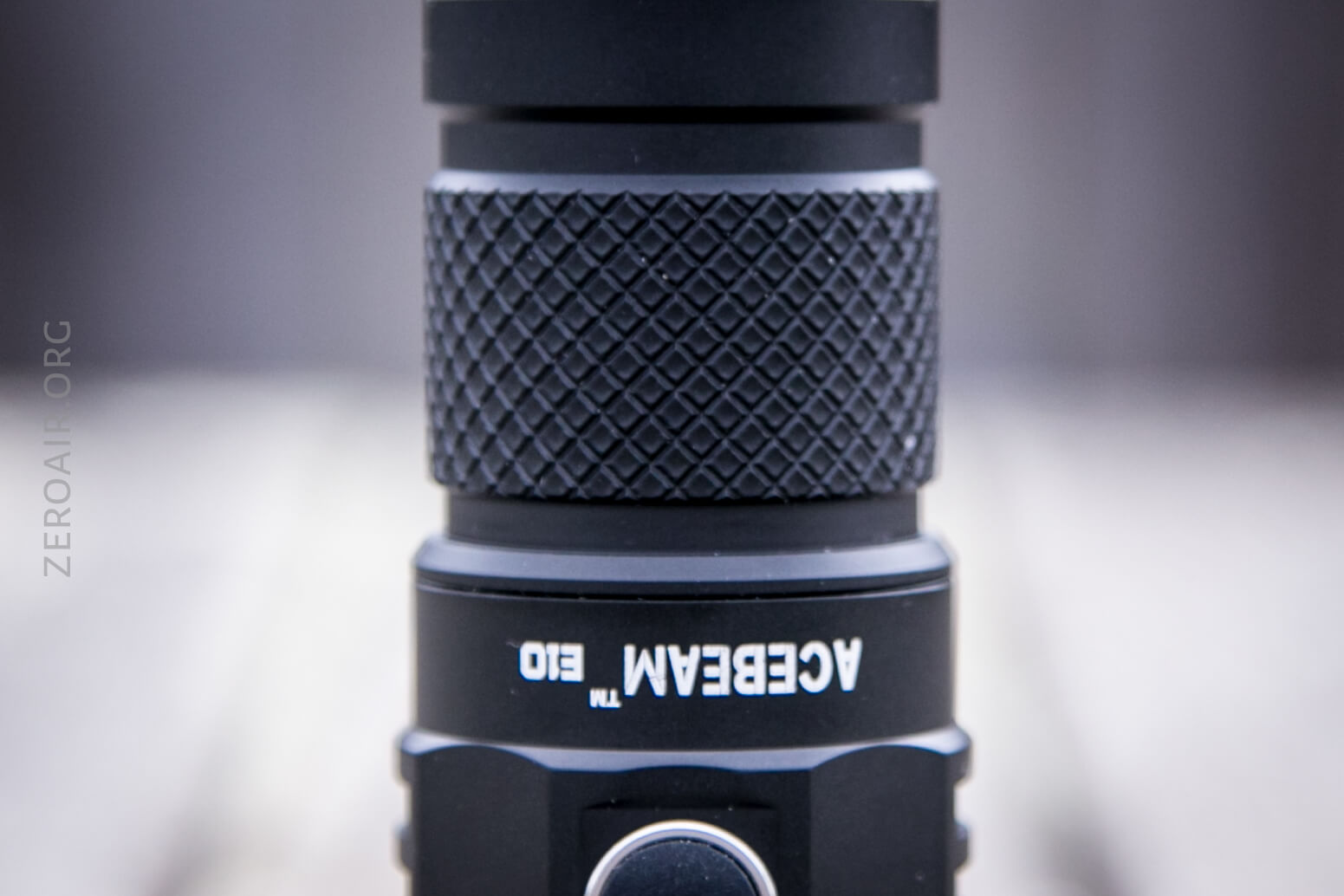 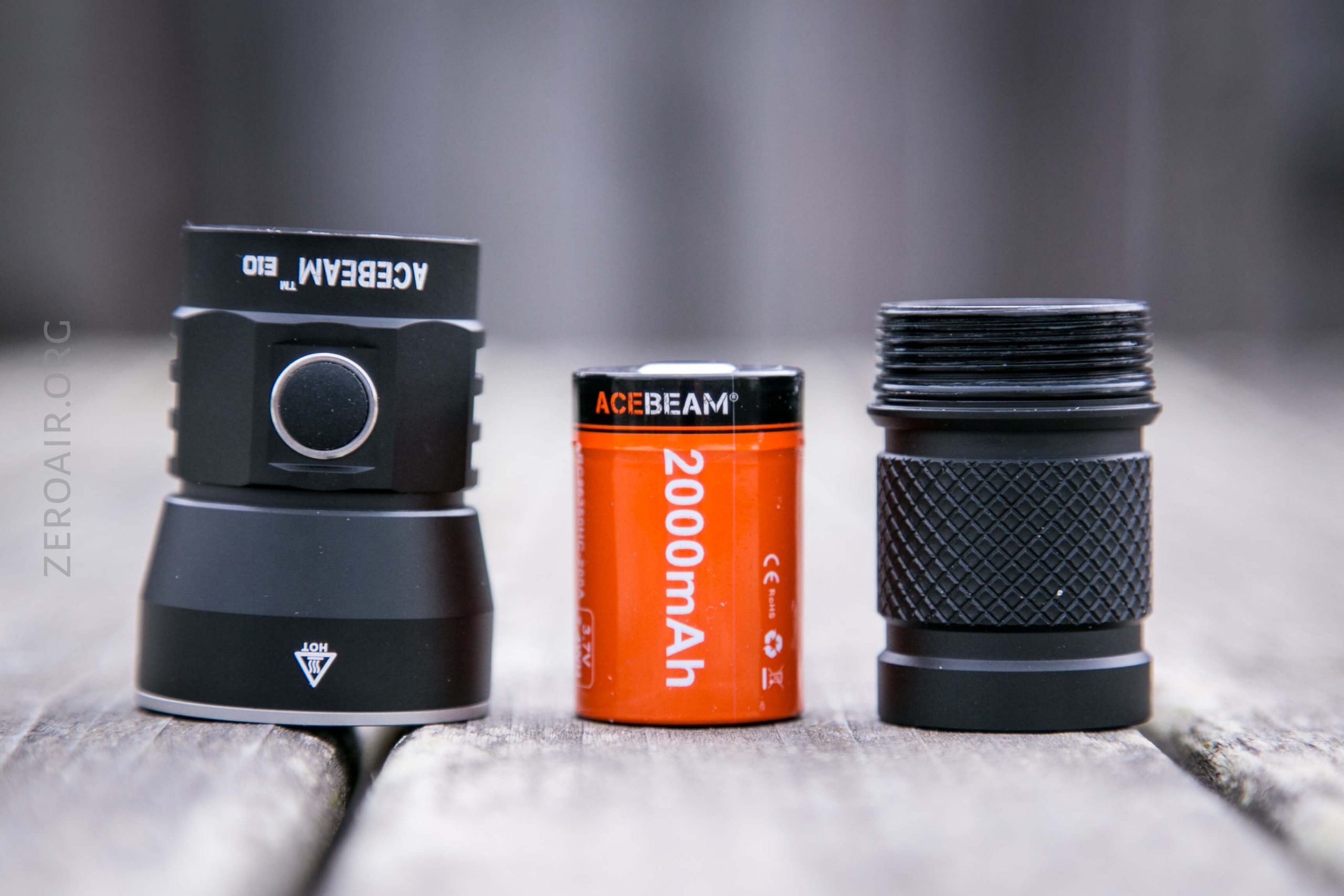 The body is a one piece – the tail cap doesn’t come off.  The threads are square cut, anodized, nice and thick, and well lubed.  The threads are great.  They’re kind of long though, so a good bit of twisting is required here. 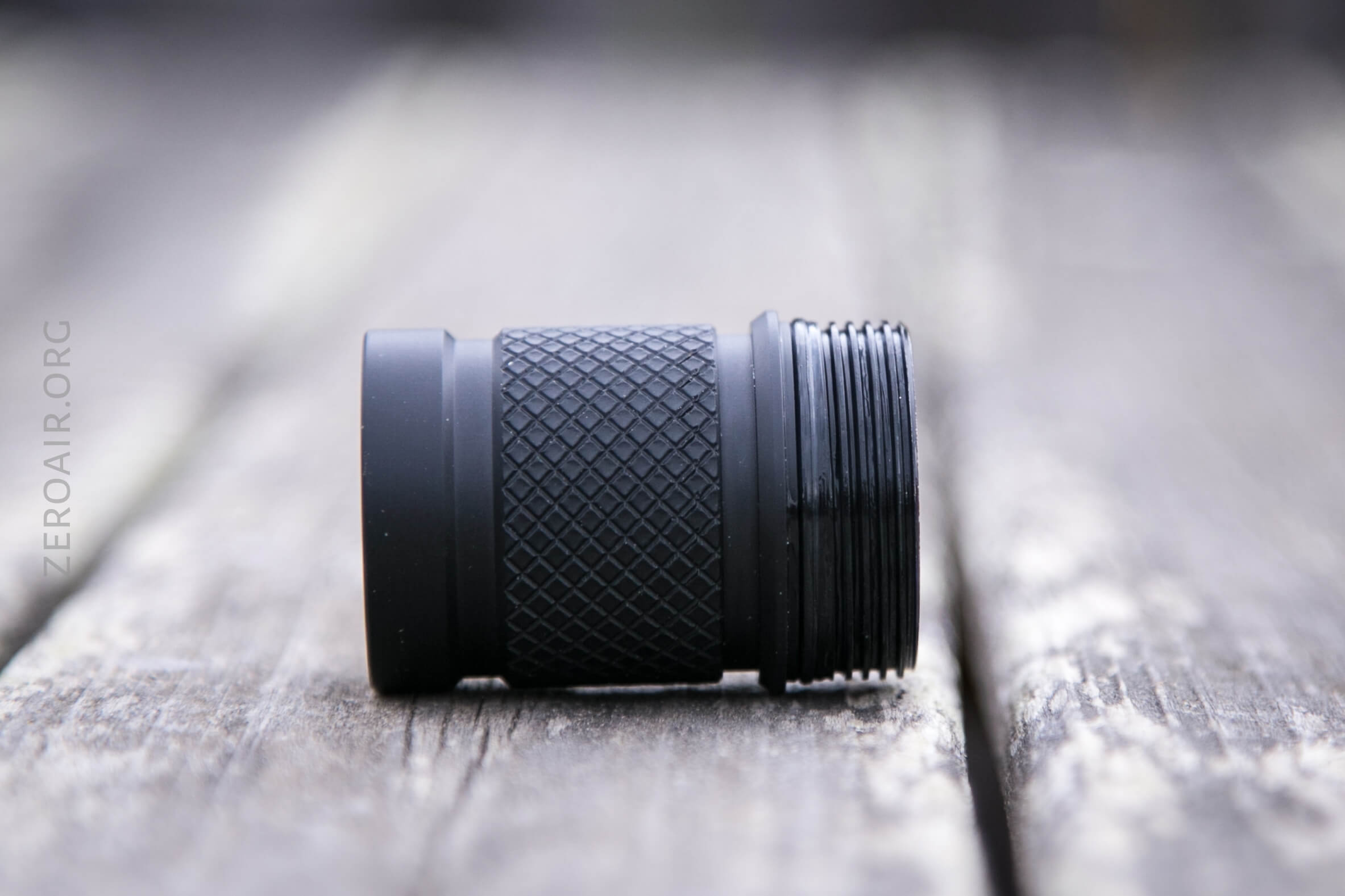 Both the head and tail have springs, and the tail spring has a good bit of travel.  You’ll have to sort of squeeze the body and head together when you’re screwing the light together, or the cell will stick out too far for the threads to grab.  No big deal, and it’s not difficult. 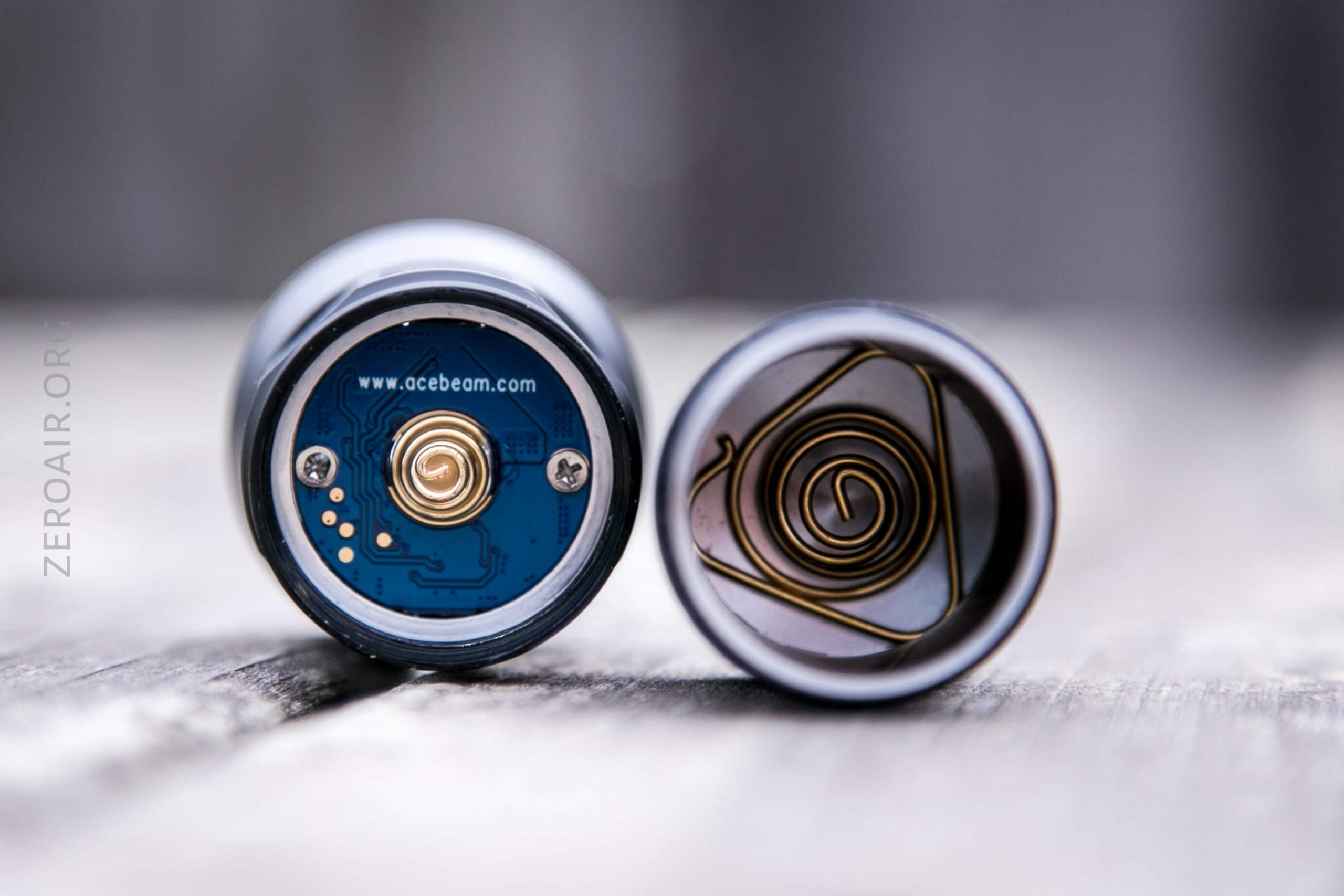 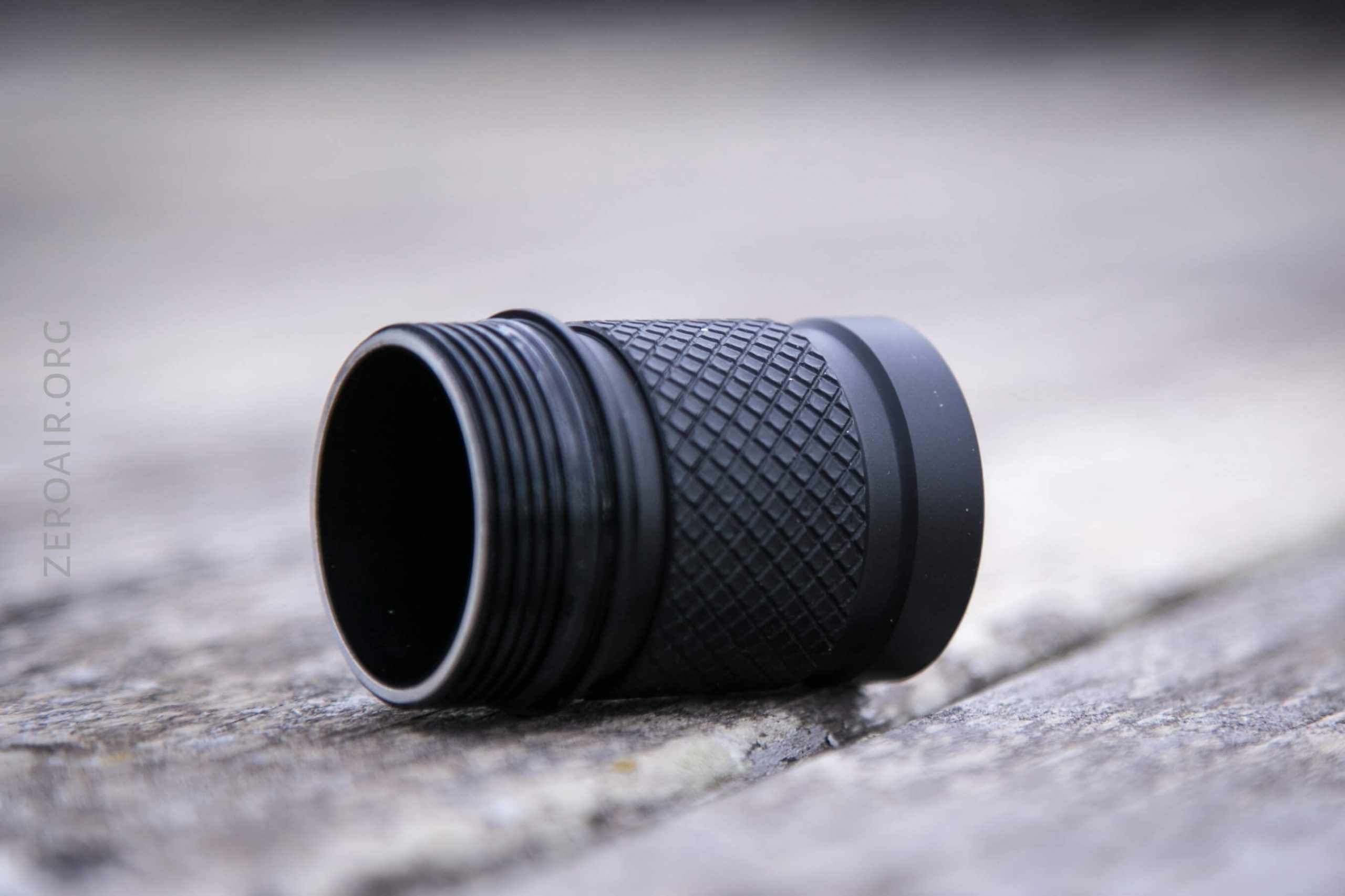 The button is just proud and not hard to find.

There’s no traditional reflector.  This is an optic of some sort – the kind most often seen with flat whites.

Now if you’re anything like me, you saw these three dots in the product photos and put together that this light has three options: white, green, and red, and thought that this light has them all.  It doesn’t; those dots are something else.  Each light has only one emitter (red or white or green).  I was disappointed when I realized that (only after I had the light in my hand) but for the price I still consider the light a massive win! 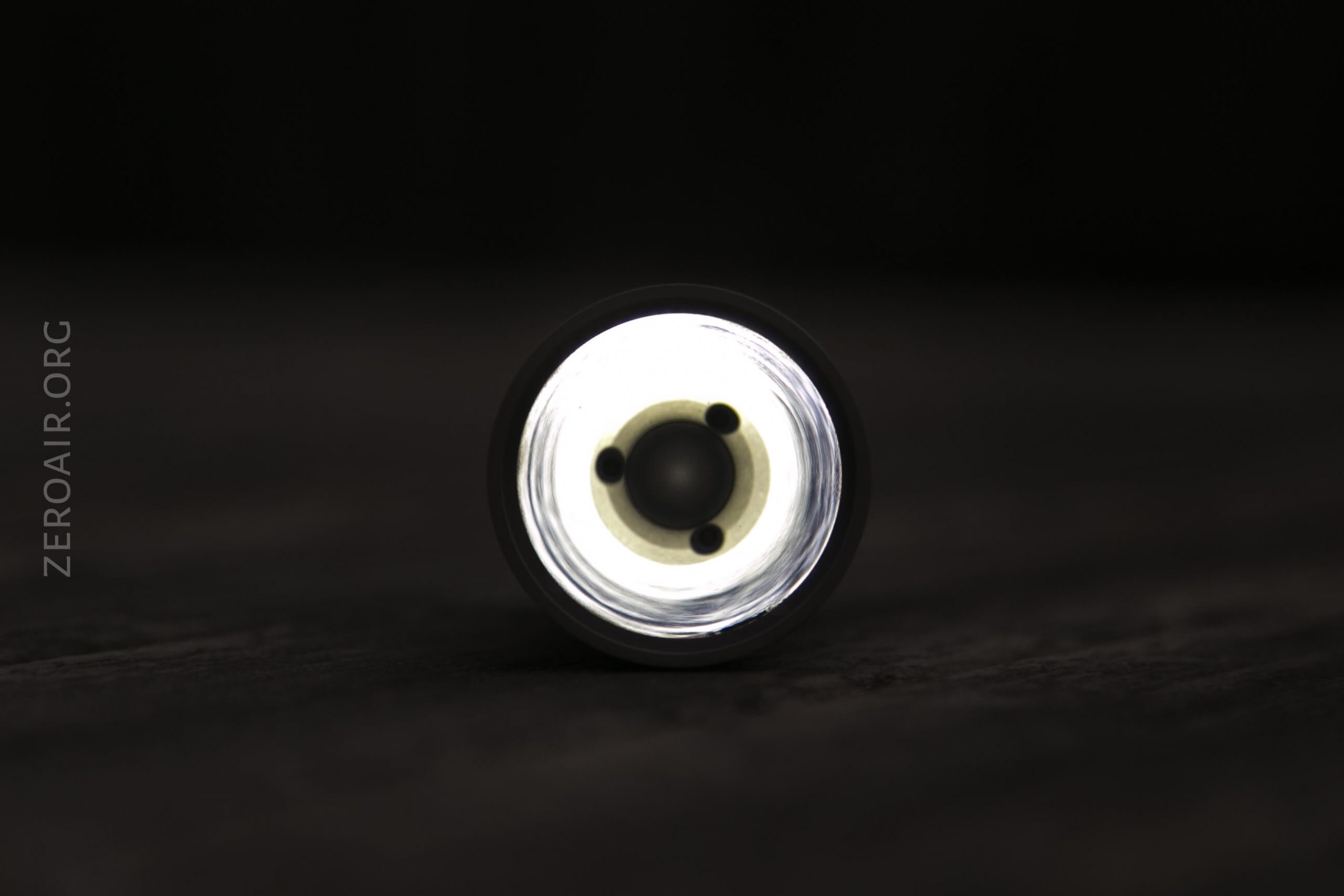 Low is very low as far as output goes but even low still has some distance to it. 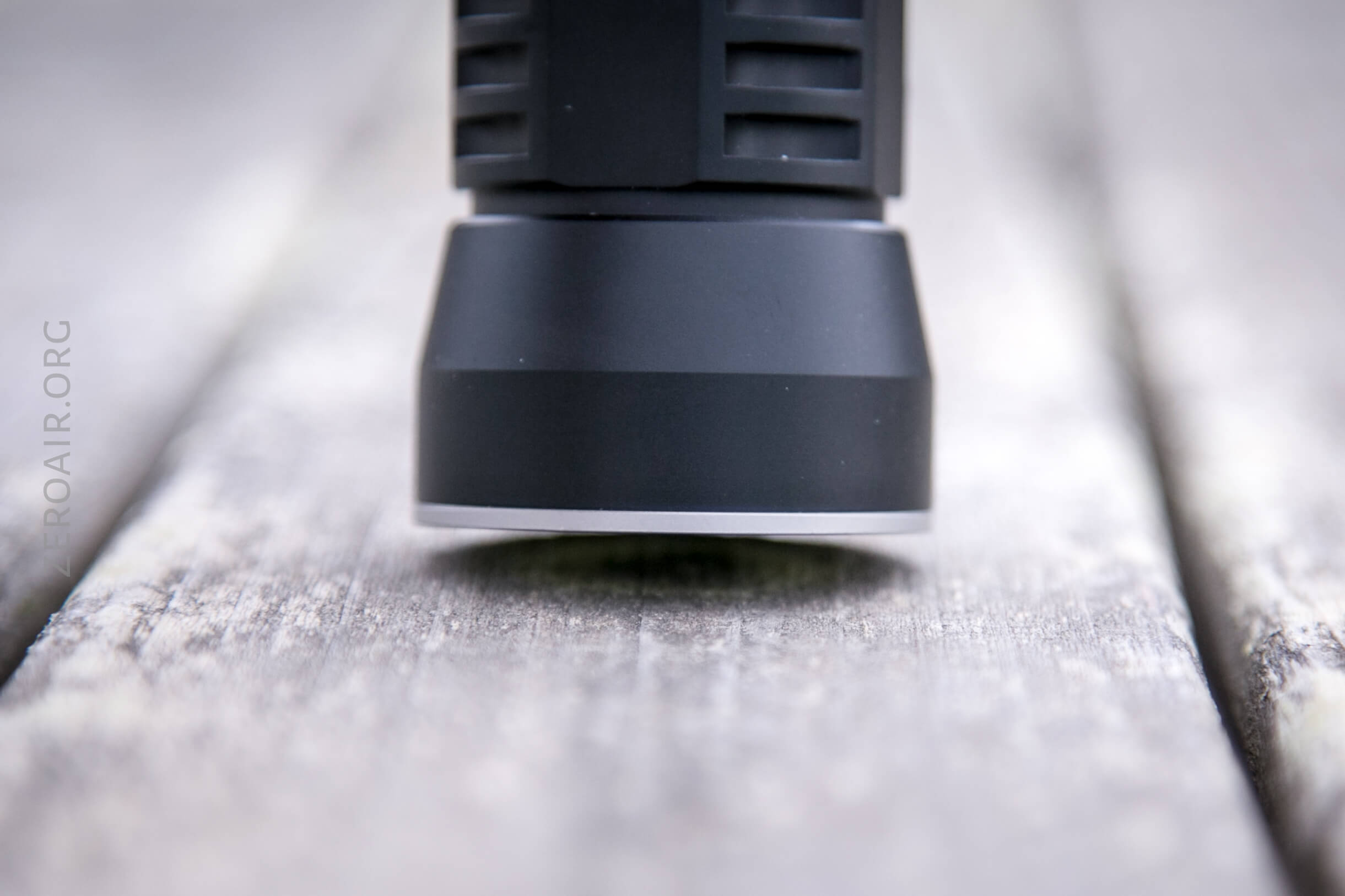 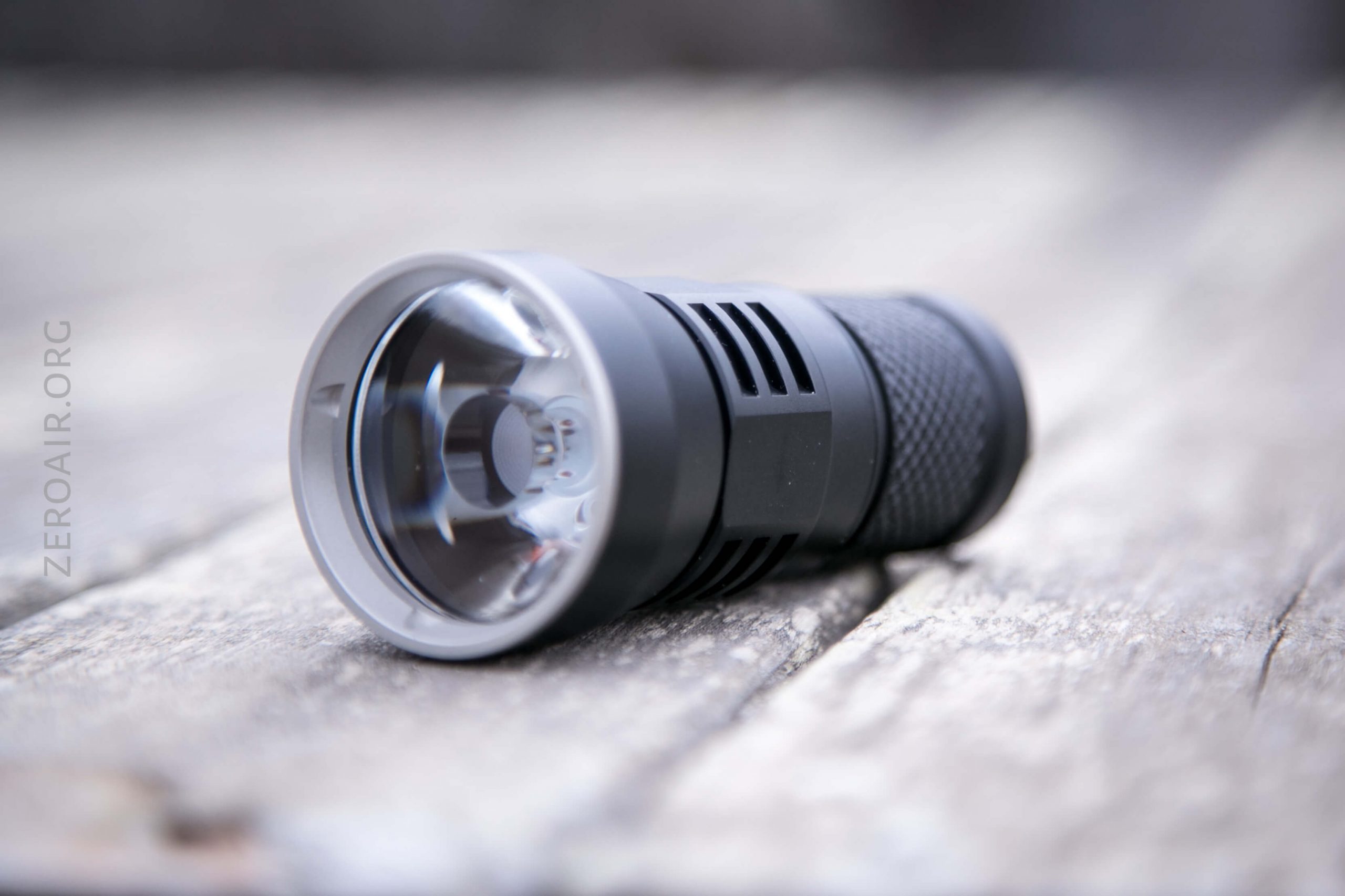 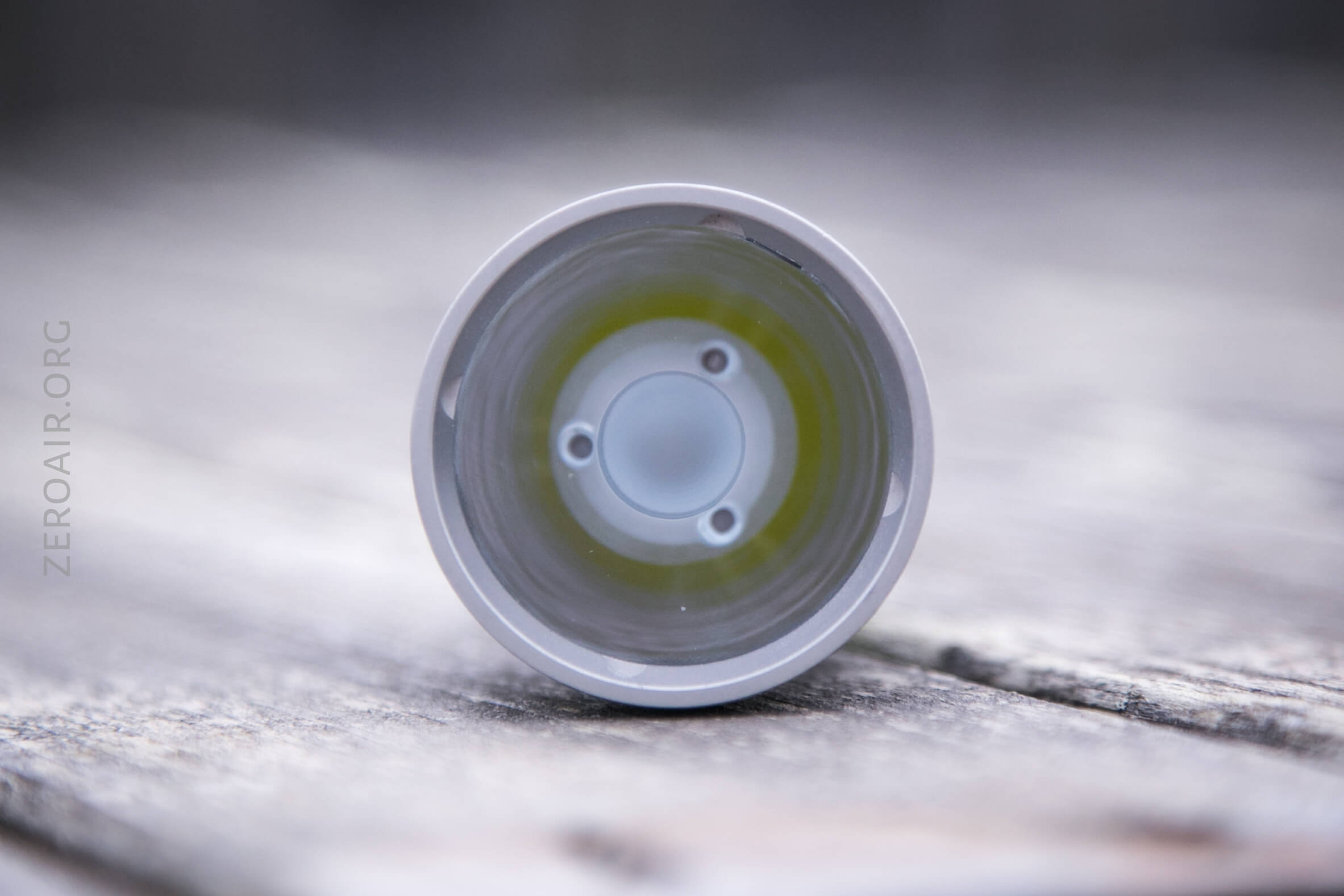 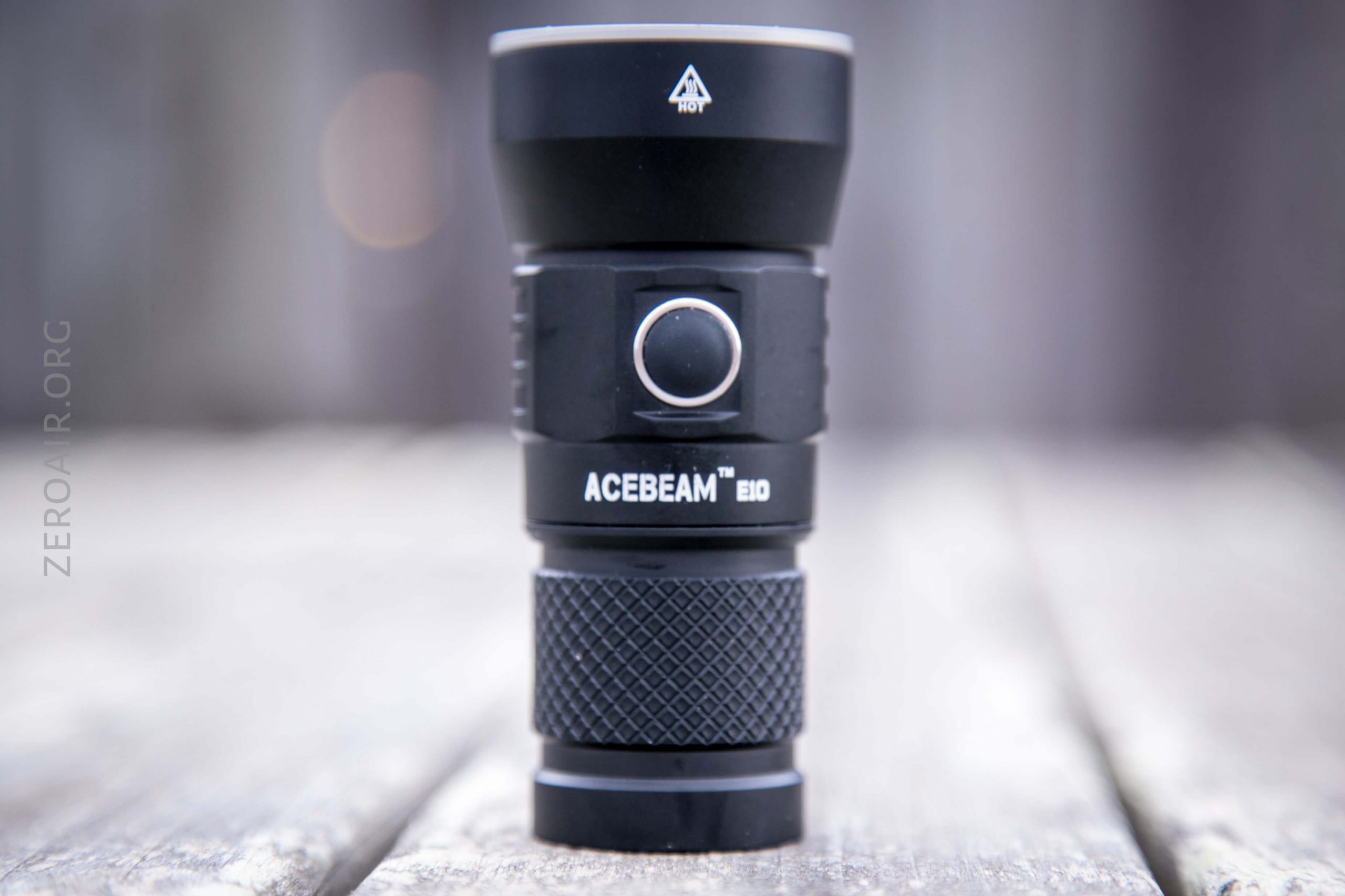 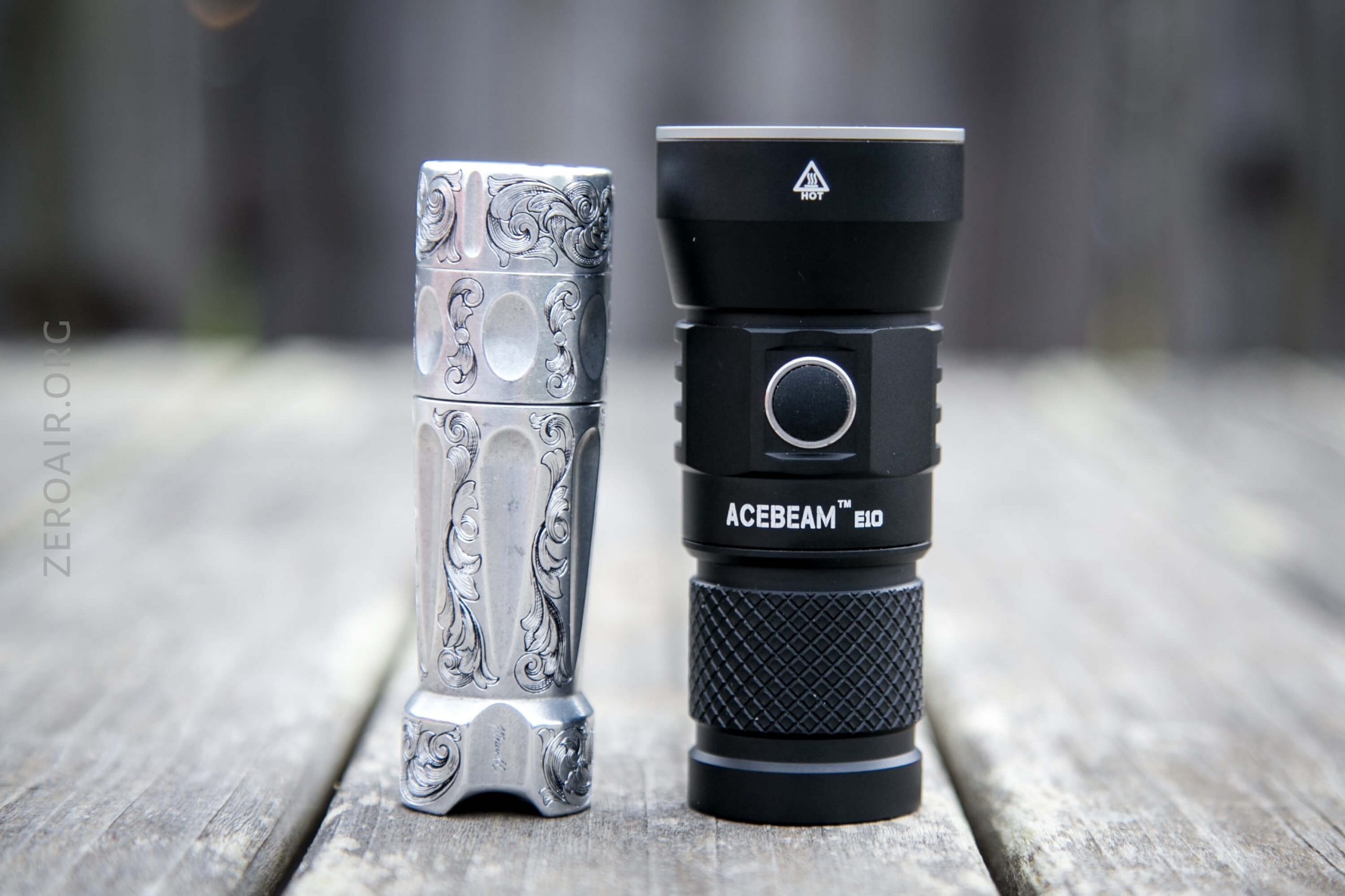 Throwing in this Malkoff flashlight because it has the same emitter and has a similar reflector.

Not one single thing is included for carry of the E10.  No pocket clip (though there appears to be a place to attach one on the tail end).  No pouch, no lanyard (and no lanyard holes).  No magnet (and the light is small enough that a magnet would probably work).

The included cell is a 2000mAh “flat top” (flat with just a little bit of bump).  It also sports micro-USB charging.

There’s a little red/green indicator dot on the positive end of the cell (seen below left, at around 2 o’clock.)

The cell goes into the light in the usual way – positive terminal toward the head.

Here are a couple of runtimes – Turbo and High.  The light exhibits LVP, at around 2.8V.  Based on bench power testing, the light also seems to flash a warning when the cell gets depleted.

Output is low, yes.  543 measured lumens is just not very much but this is a dedicated thrower.  See above in The Big Table, the relatively new “Candela per Lumen” part?  On this light it’s 201.6.  That’s absolutely massive.  Ridiculously massive!  So to be clear, you aren’t buying this light for big lumens, you’re buying it for throw!

Turbo isn’t regulated at all.  High is very well regulated! 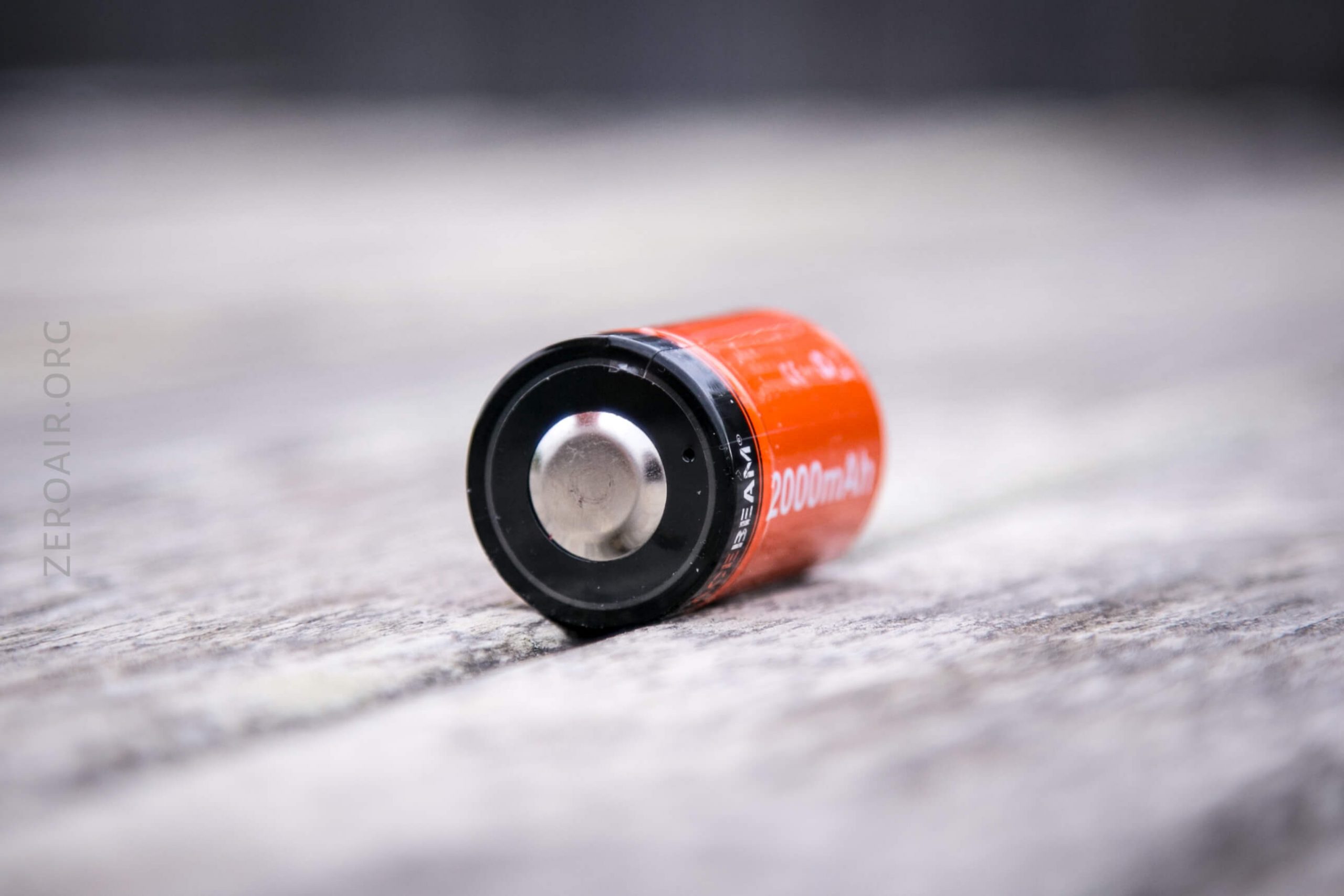 There’s an indicating LED on the positive end of the cell – red means charging, green means charging is complete.  Charging is fairly slow, at around 0.5C – or 0.8A.  That’s fine though; in my opinion slower is better.

There’s a bit of sawtooth on the lowest mode (possibly Low too), but I don’t notice it in real life.

Here’s a blow up on those two modes – longer timeframe for a bigger picture.

There’s just one switch on the E10.  It’s a rubber-covered e-switch, and the pad is plenty big.

The emitter in my copy is the white version of this Osram emitter.  Also available are red and green Osram options.

There’s an optic in here, which seems to be most often used with the Osram Flat emitters (but maybe not exclusively).  It’s unusual – despite how it looks there’s also a lens over this optic, so it’s smooth across the top. 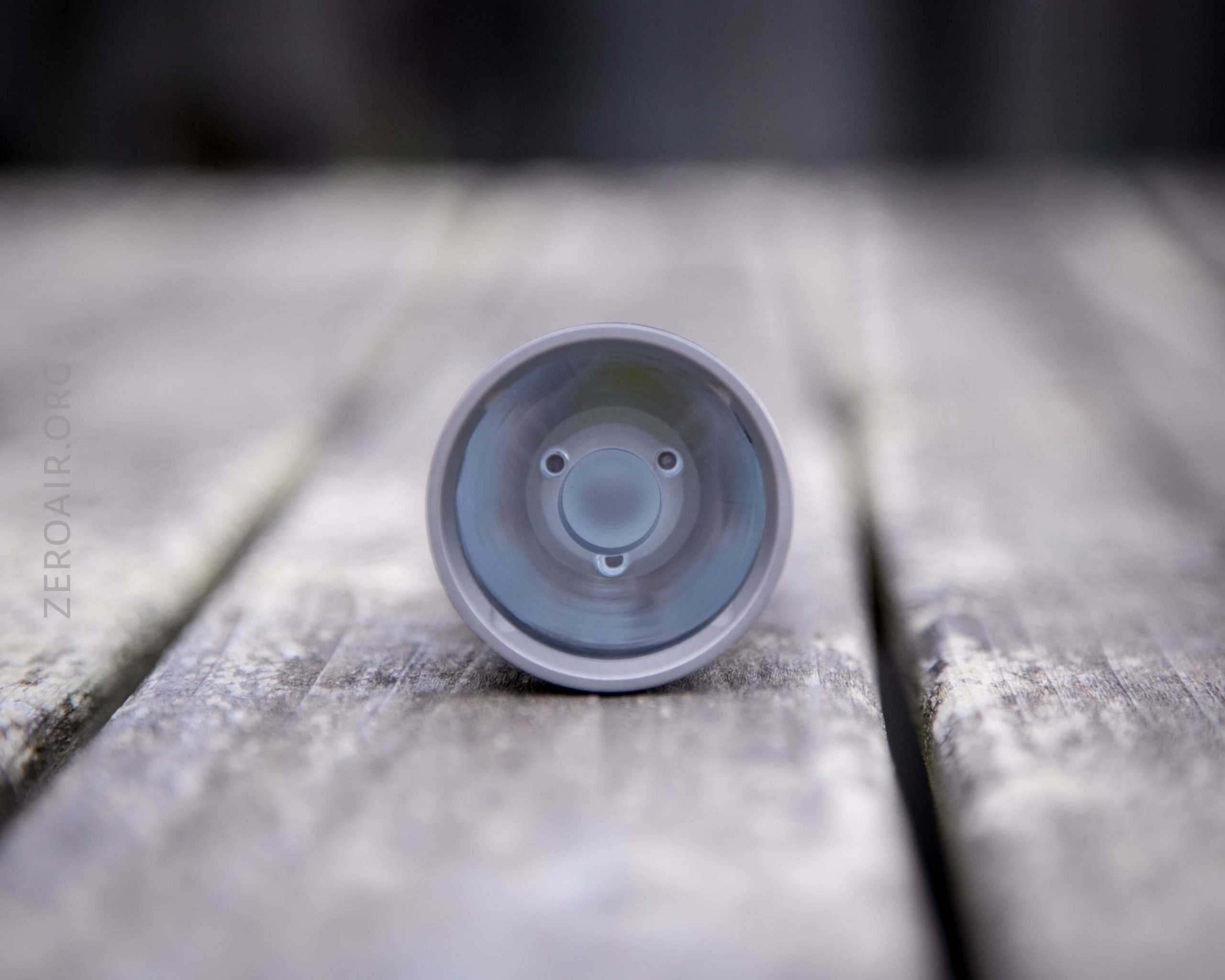 Test light is on the left!  And this time I did all the modes vs the one mode of the BLF-348.  Let me know if that’s something worthwhile.

As an Amazon Associate I earn from qualifying purchases.