Always on the hunt for the perfect orange flashlight, recently I found this one by Coast.  It looks like a fun light, so I reached out to Coast, and they sent this one (and another one) out for review.  This is my testing of the Coast Polysteel 600R, a plastic zoomy with batteries included.

There’s only one version, but the body is available in black, red, blue, green, and orange.

These are going for $70 right now on the Coast website.

As much as I wanted to like this light, there’s pretty much nothing I like about it.  There are two big deal breakers for me though.  First of all the size, which I didn’t find very obvious from the product page – you’ll have that settled here since I’ll make it clear.  And secondly was the PWM.  The PWM on this light is very bad, and even noticeable on the highest mode.

All that said, I think the light is mostly accurately represented by Coast, and while a bit expensive on their site, it’s available for less elsewhere.  If this fits your criteria, and you can live with the PWM, then it is a nicely colored option.

* Measurement disclaimer:  I am an amateur flashlight reviewer.  I don’t have $10,000 or even $1,000 worth of testing equipment.  I test output and such in PVC tubes!!  Please consider claims within 10% of what I measure to be perfectly reasonable (accurate, even). 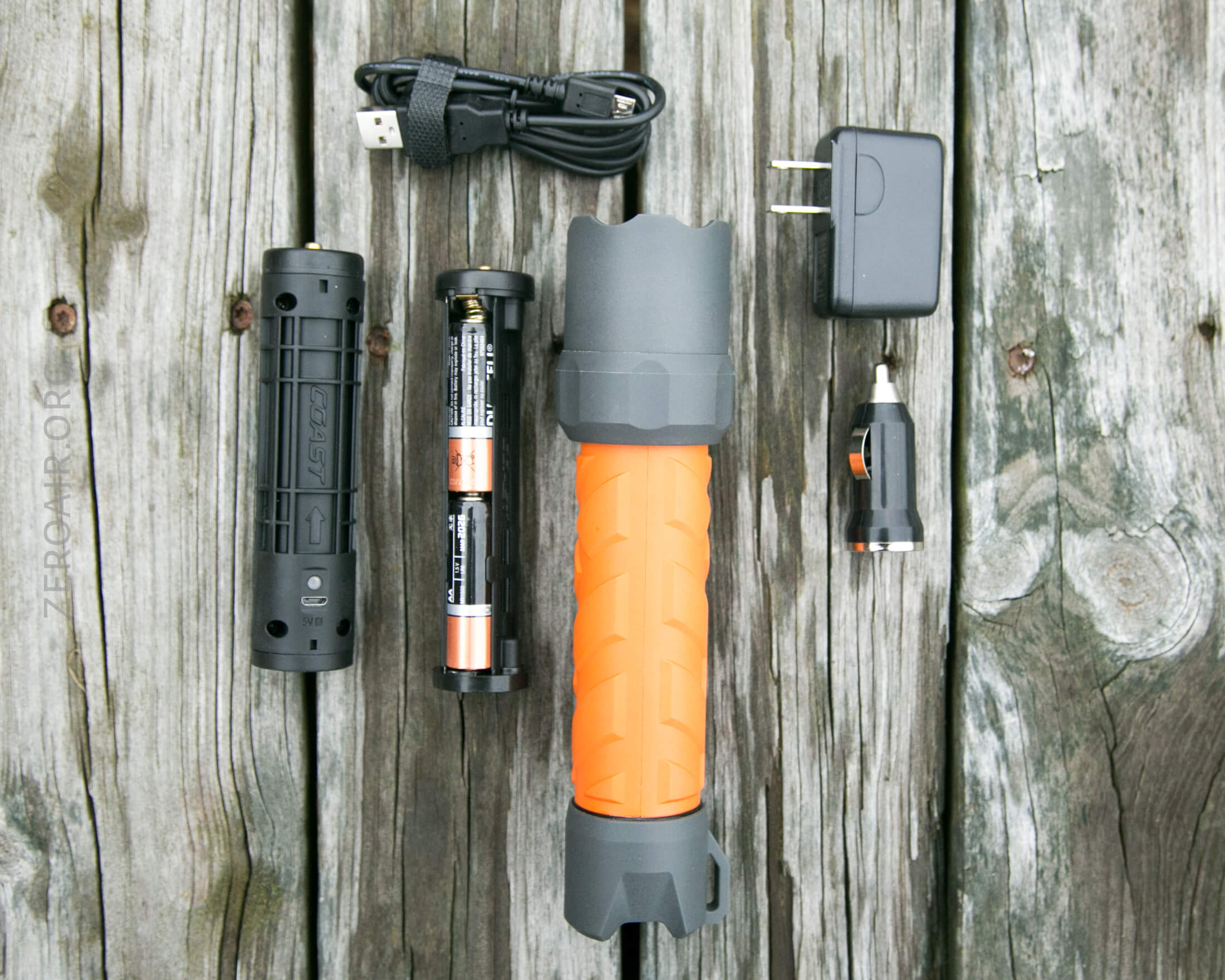 The box this light ships in is a big box, with lots of printing.  Slip fit box, with reliefs for opening – it’s a nice box. 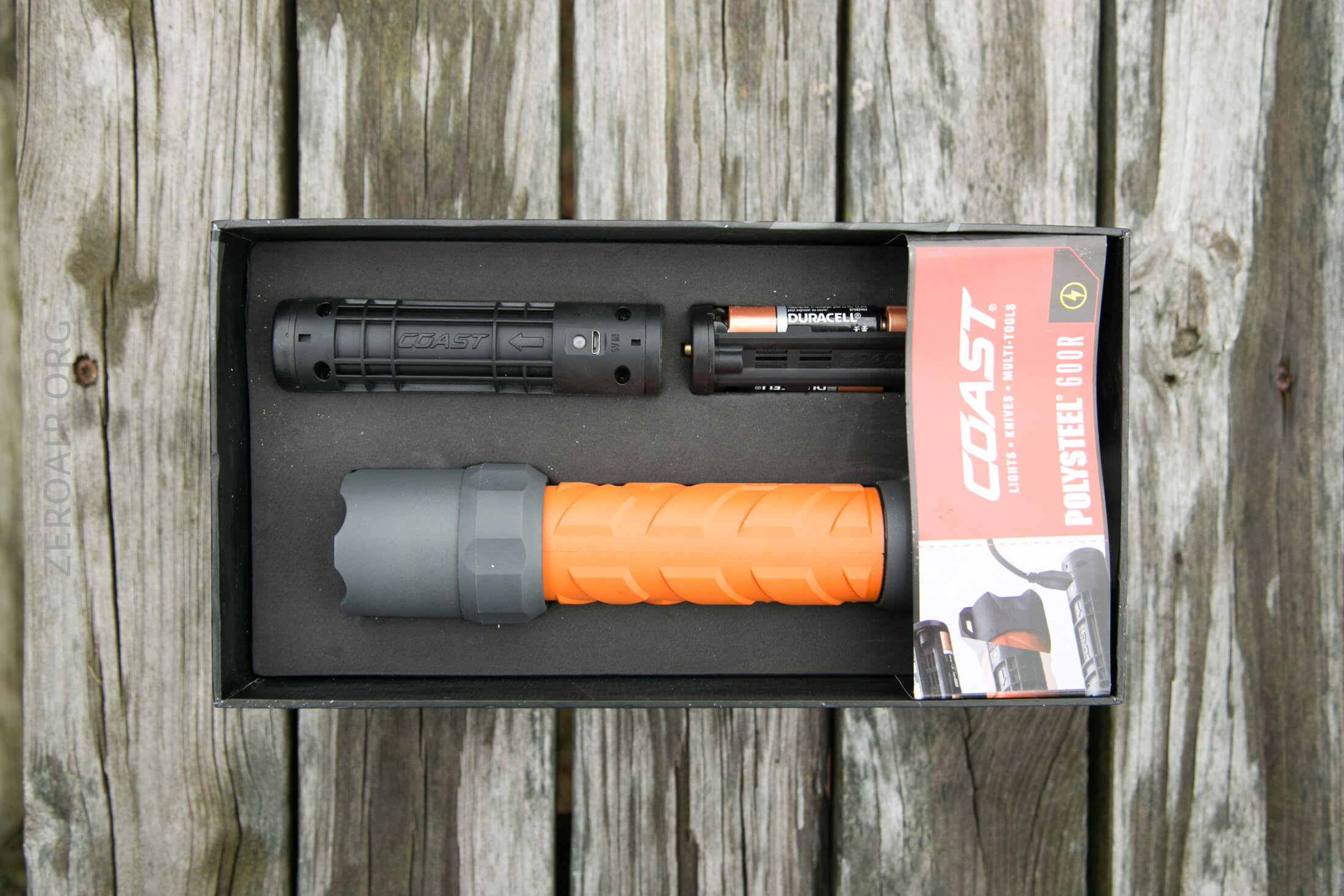 The light does not come with a manual.

The color is exactly what I’d hoped.  It’s the right orange (or close enough).  The whole body is plastic (aka “polysteel”).  There’s some grip pattern on the body, too. 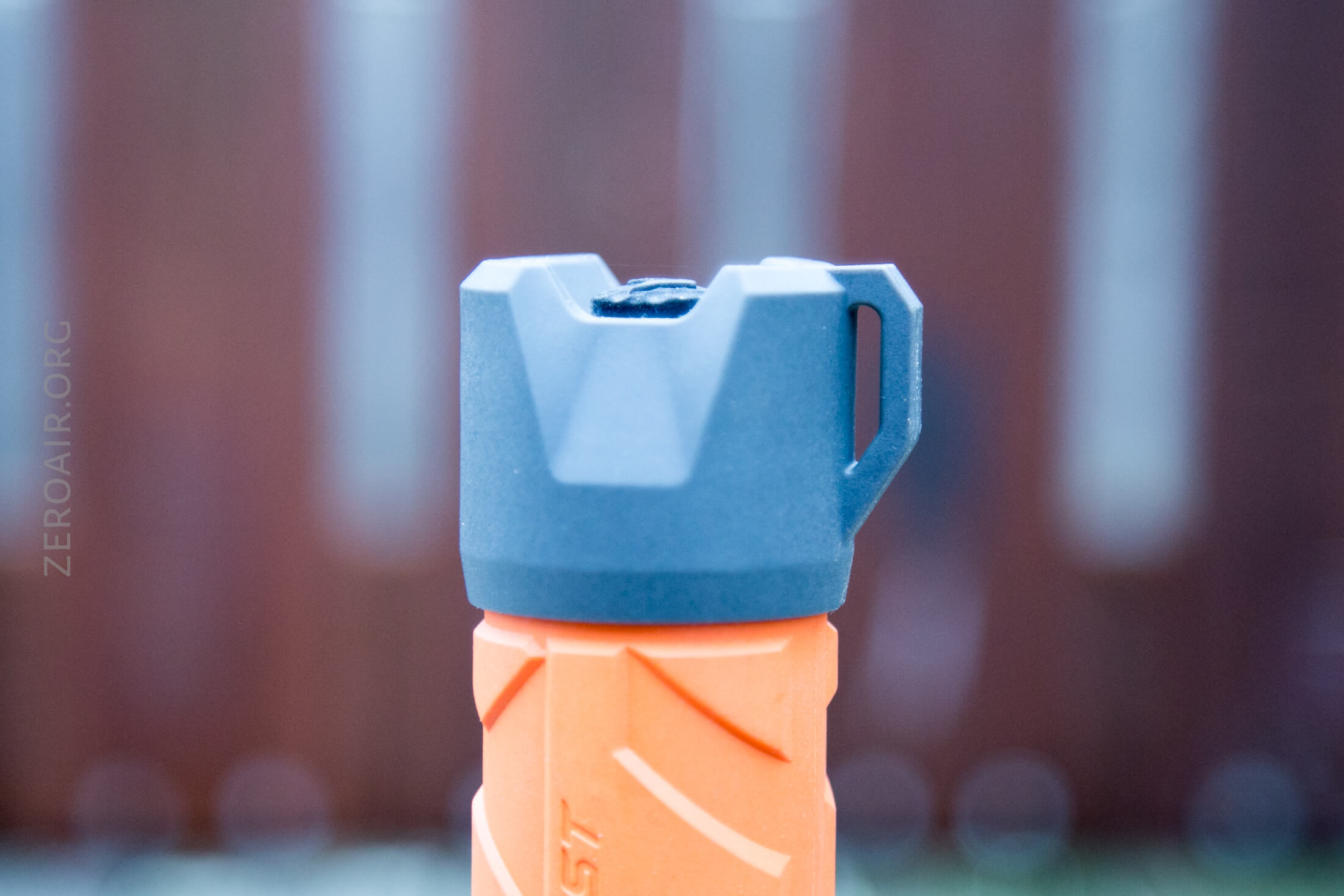 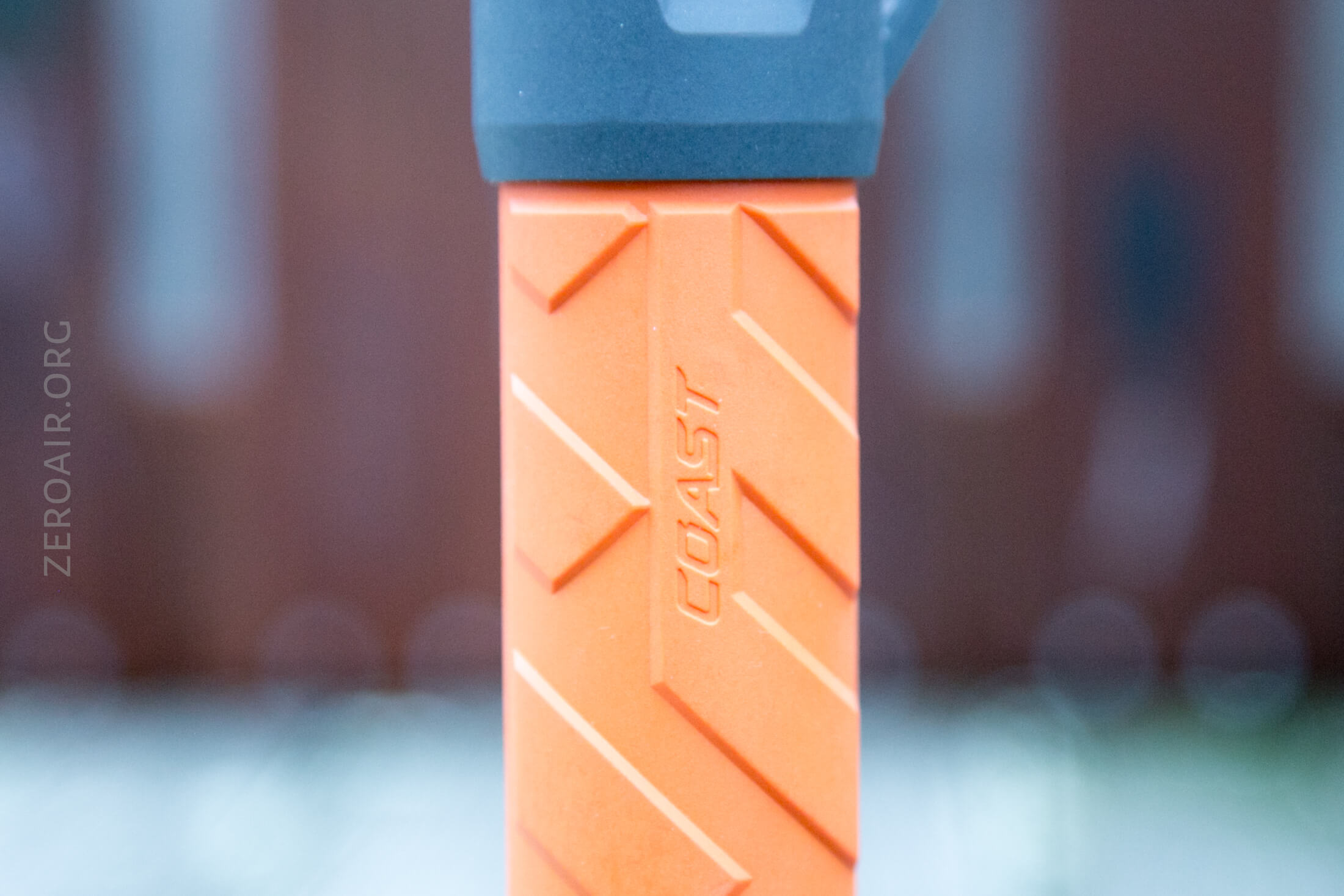 The tailcap has a spring, and is held together by three screws.  Even the threads on the body are plastic, but they’re sufficient.  You can also see the metal sleeve which runs inside the body – required for electrical connection from the tailcap.

The head does not have a spring, but has this…. contact pad.  It’s not a typical pad. 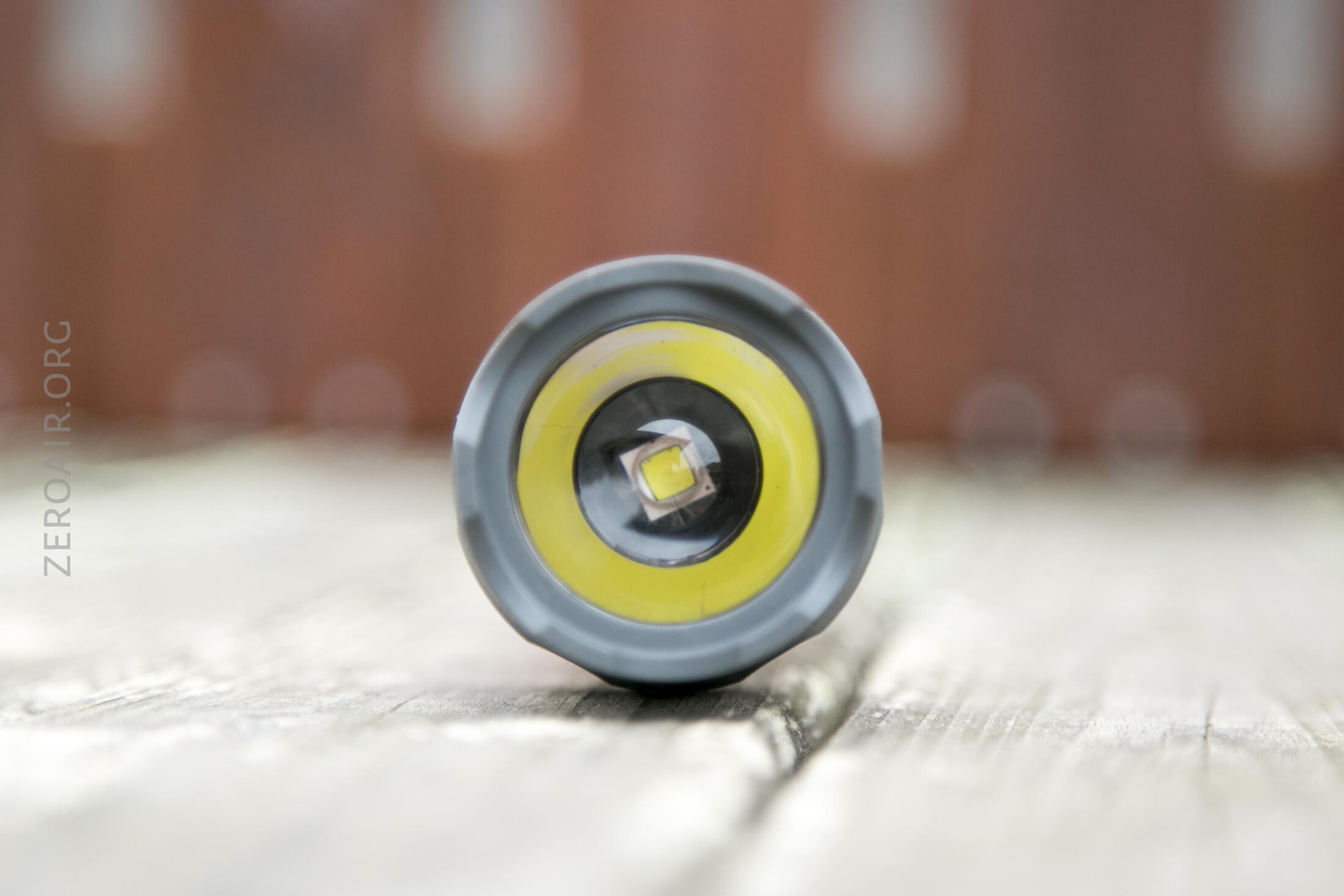 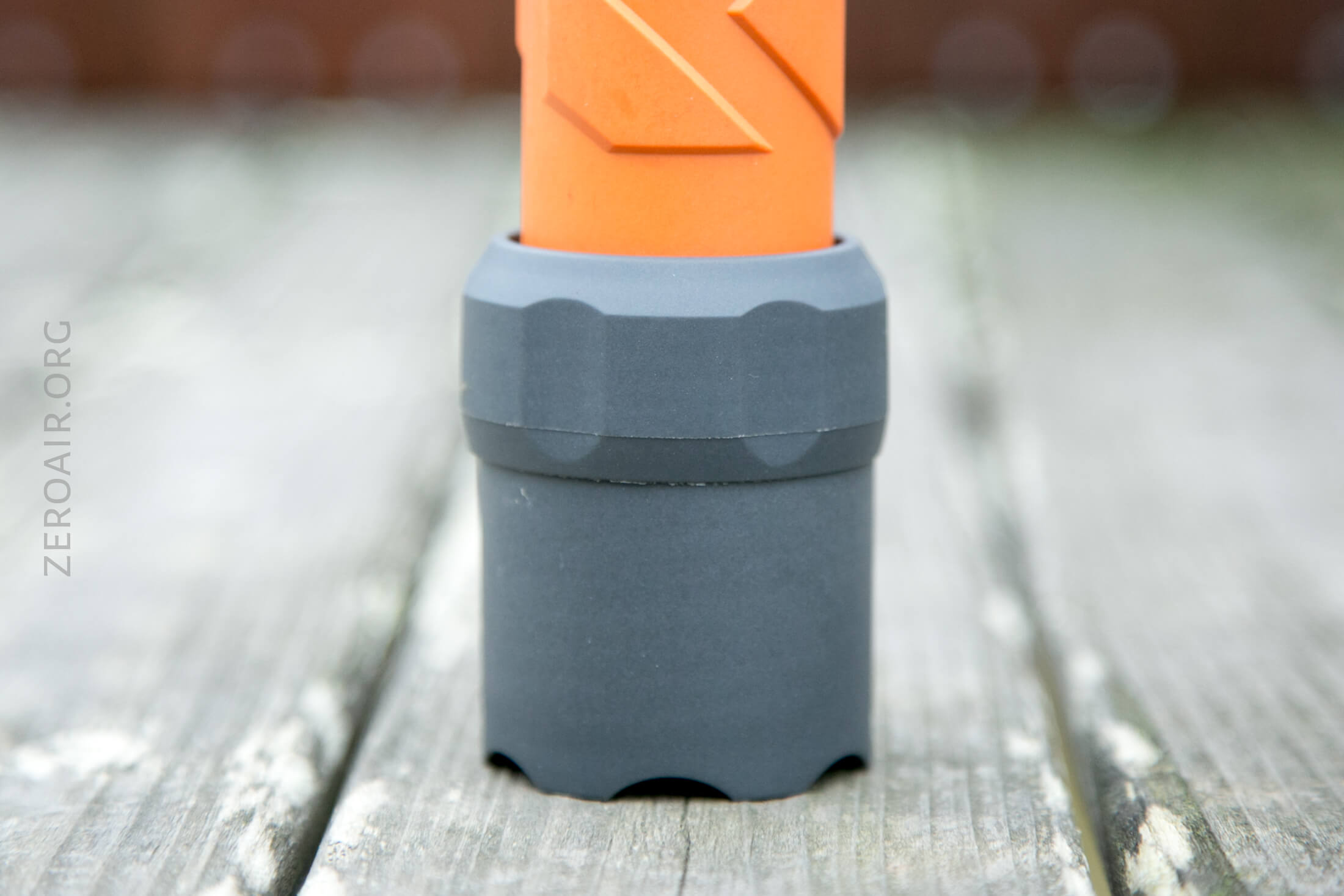 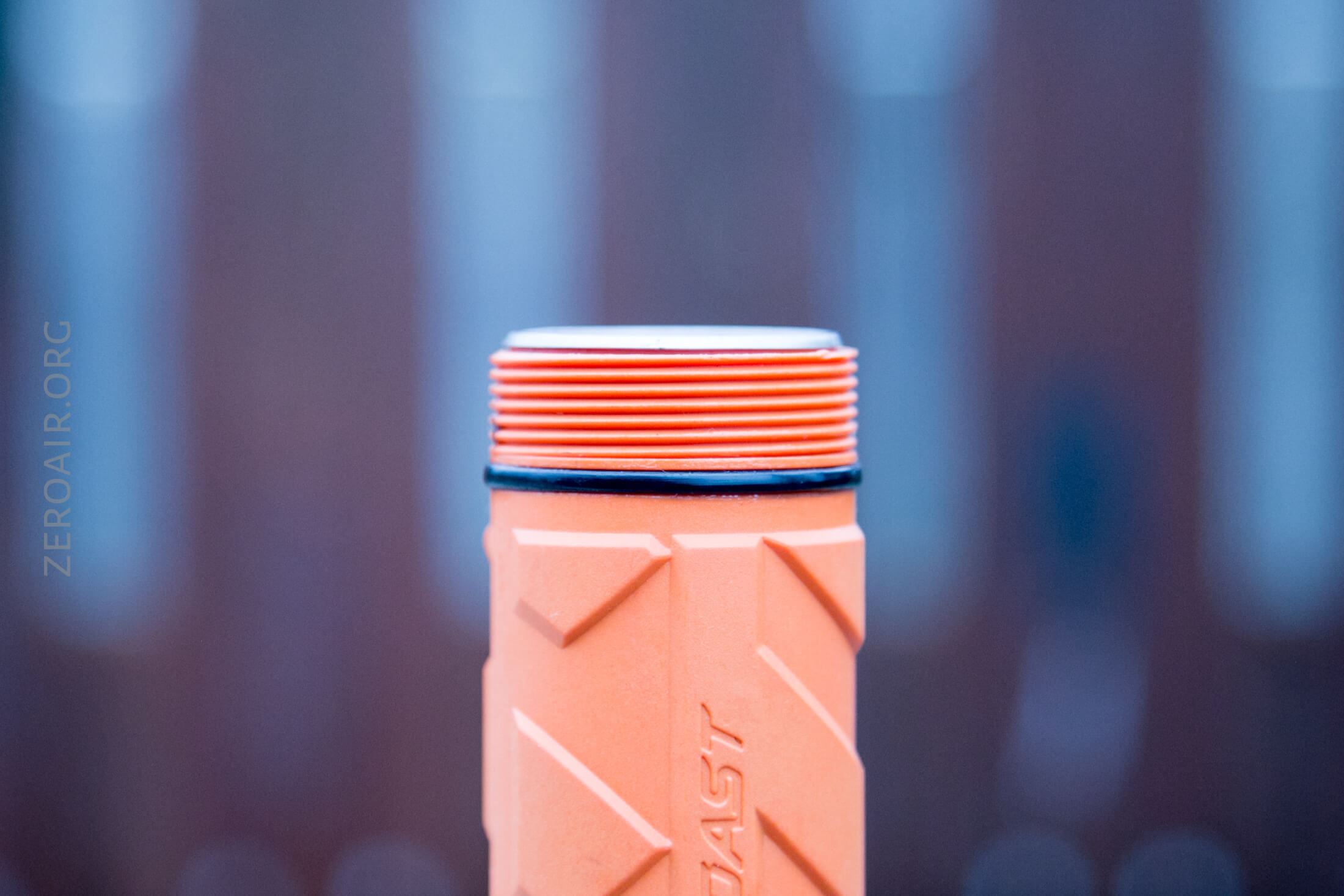 I didn’t disassemble this light.  It’s… glued?  Or any way resists unscrewing enough that I didn’t want to fight it.

The weight is 340g, but the dimensions are not mentioned.

The light is around 8″ long when in flood mode, and 8.25″ when zoomed.  It’s just under 2″ in diameter in the head area, and somewhat thinner in the body.

This is not a small light.  That’s fine, I often review not-small lights.  In fact some of my favorite lights are not small lights.  But wow does this one carry big, for what’s essentially a single 18650 light.

The only thing included for carry is the coffee-mug tailcap handle.  Through this could be attached a lanyard or strap of some sort – but one is not included.

Coast includes two options for powering the Polysteel 600R.  On the left below is the built in 18650 with on-board charging and USB-output.  On the right is a 4xAA cell – 4x AA cells are included.  These cells are in series – you’ll need all 4 to run the light.

These Duracells don’t appear to be different, but the holder seems fickle.  In order to get my NiMH cells to work, I had to throw in a little contact magnet on the positive end of one.  The NiMH are standard, so I really don’t know what was the problem.  I can tell you that the light worked much more reliably on the li-ion setup.  In fact after the runtime with AA pack, the light would no longer work on the AA pack.  I couldn’t explain that, either – the voltage from charged AA’s in the pack was just fine.  Randomly later, the light did start working again with the pack – it was a problem I never could explain. 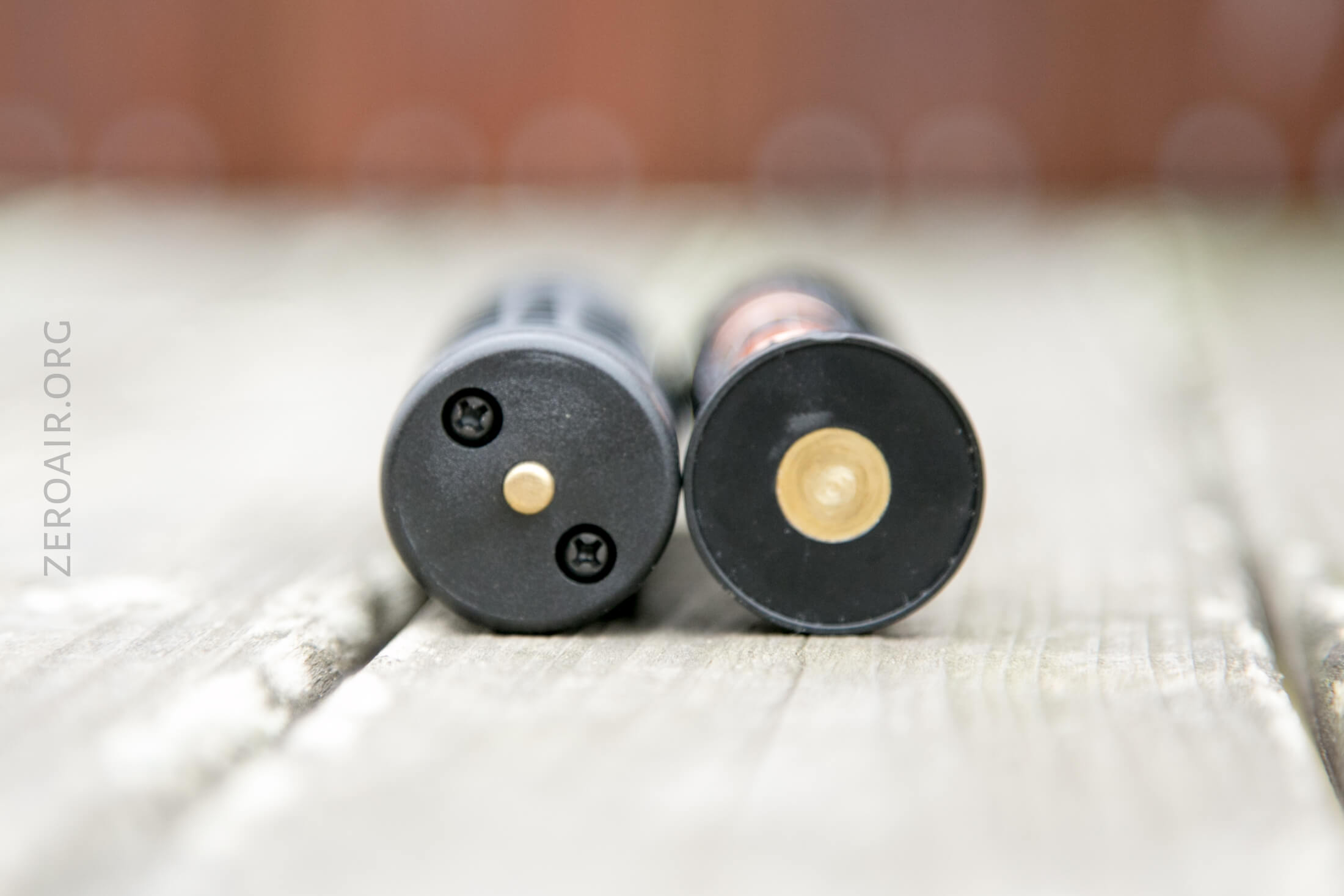 The liion pack has USB-out on one side of the negative end, and micro-USB in on the other. 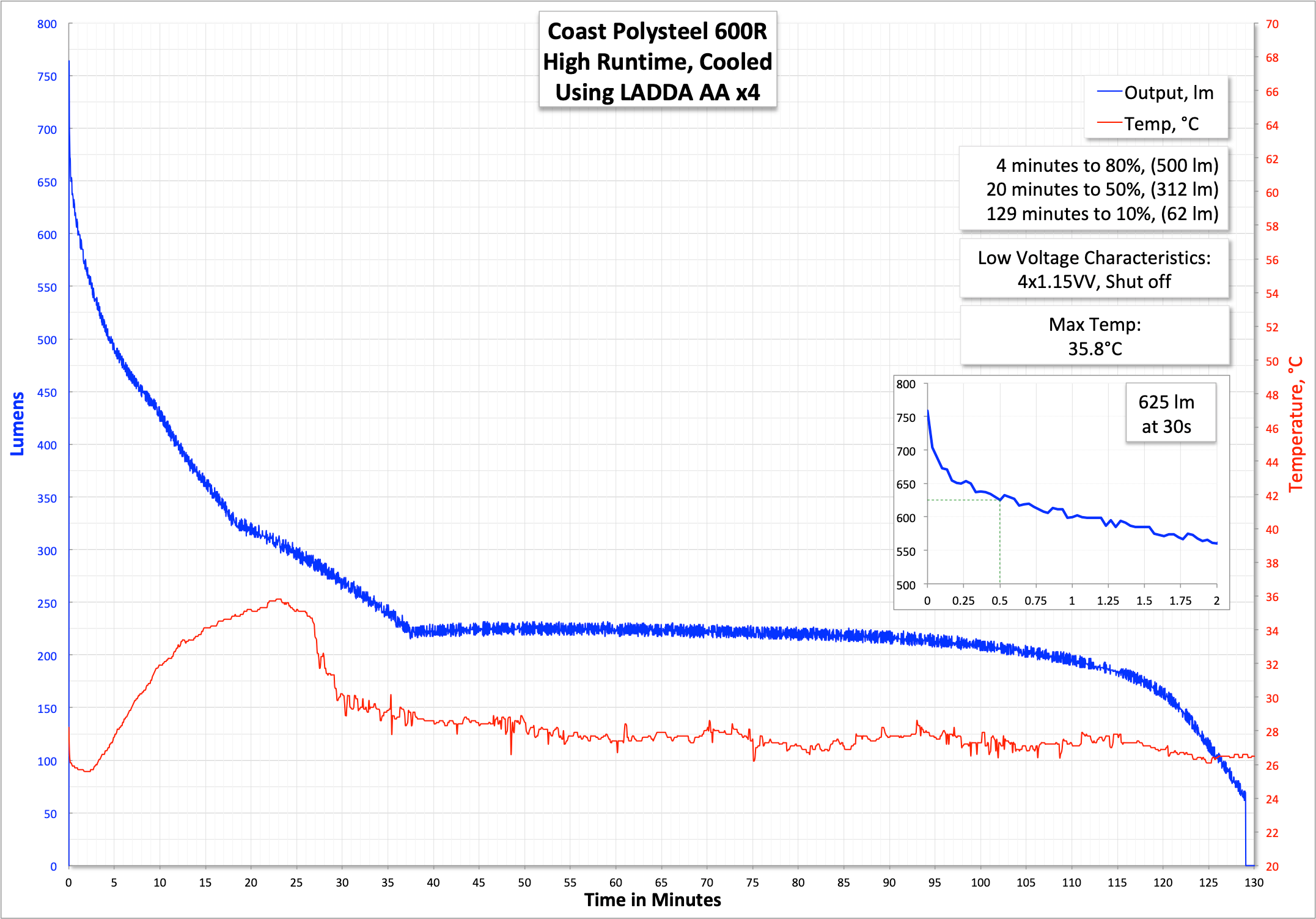 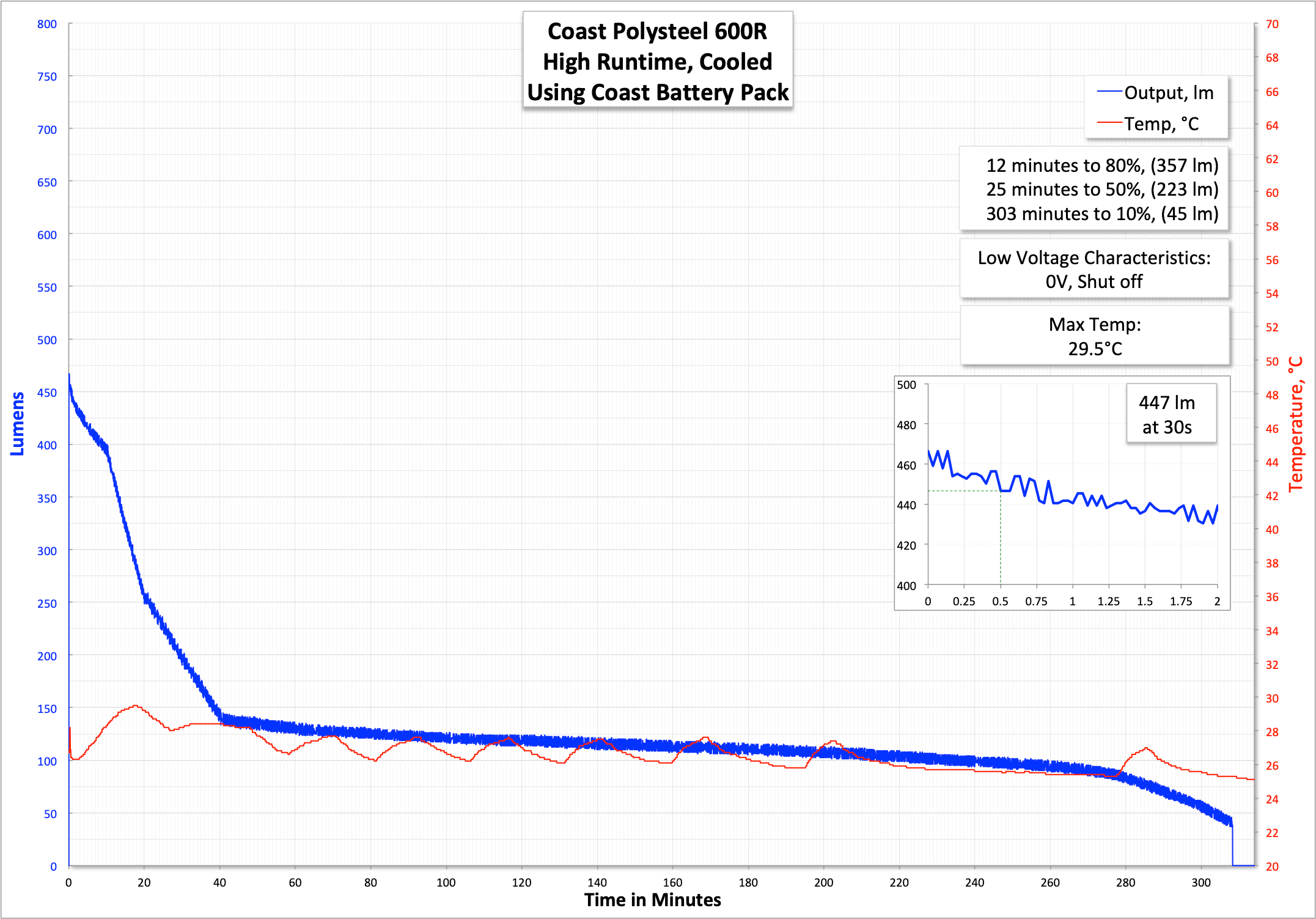 There is no LVP at all on this light, at least with the liion pack.  – that’s right, it discharged the liion to 0.0V.  Furthermore, when charging the liion pack backup, it did not do so softly.  It hit the completely depleted liion pack with the full current from right at the start. 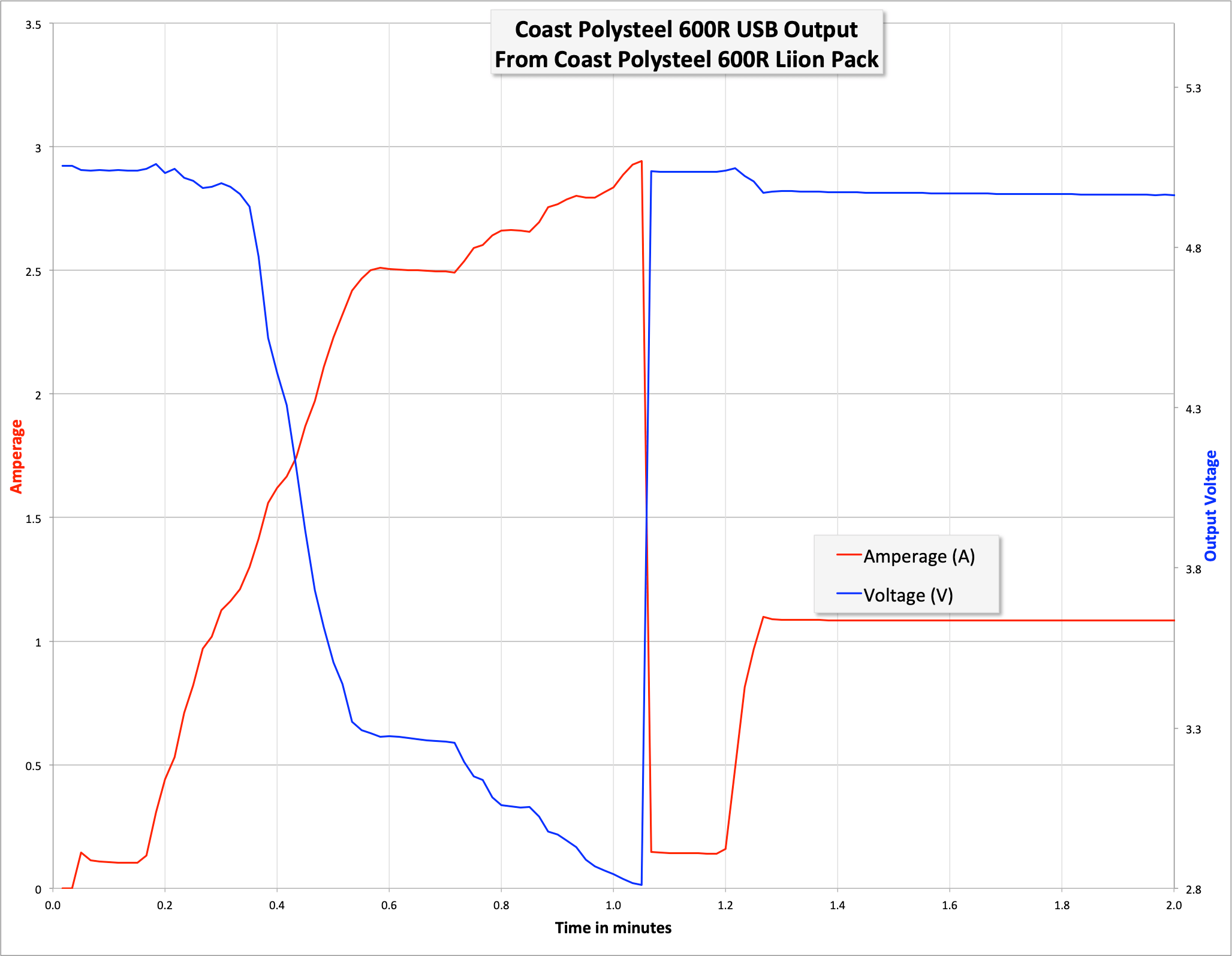 It did seem to shut off when using the AA pack, with cell voltage around 1.15V.

PWM is present even on high.  I found the PWM on low to be absolutely off putting.  Moving the light around on low makes an almost strobe like effect.

There’s a single switch on this light.  It’s a mechanical forward clicky on the tailcap.  It’s also completely normal sized, despite looking tiny in the gigantic tailcap.  The rubber has a lot of texture, and impressively has Coast’s “C” logo.

* Generally the light will come on in high.  If you multiple click or multiple half press quickly enough, you will advance the modes.  Normal forward clicky behavior.

Coast doesn’t make a claim on what this emitter is. 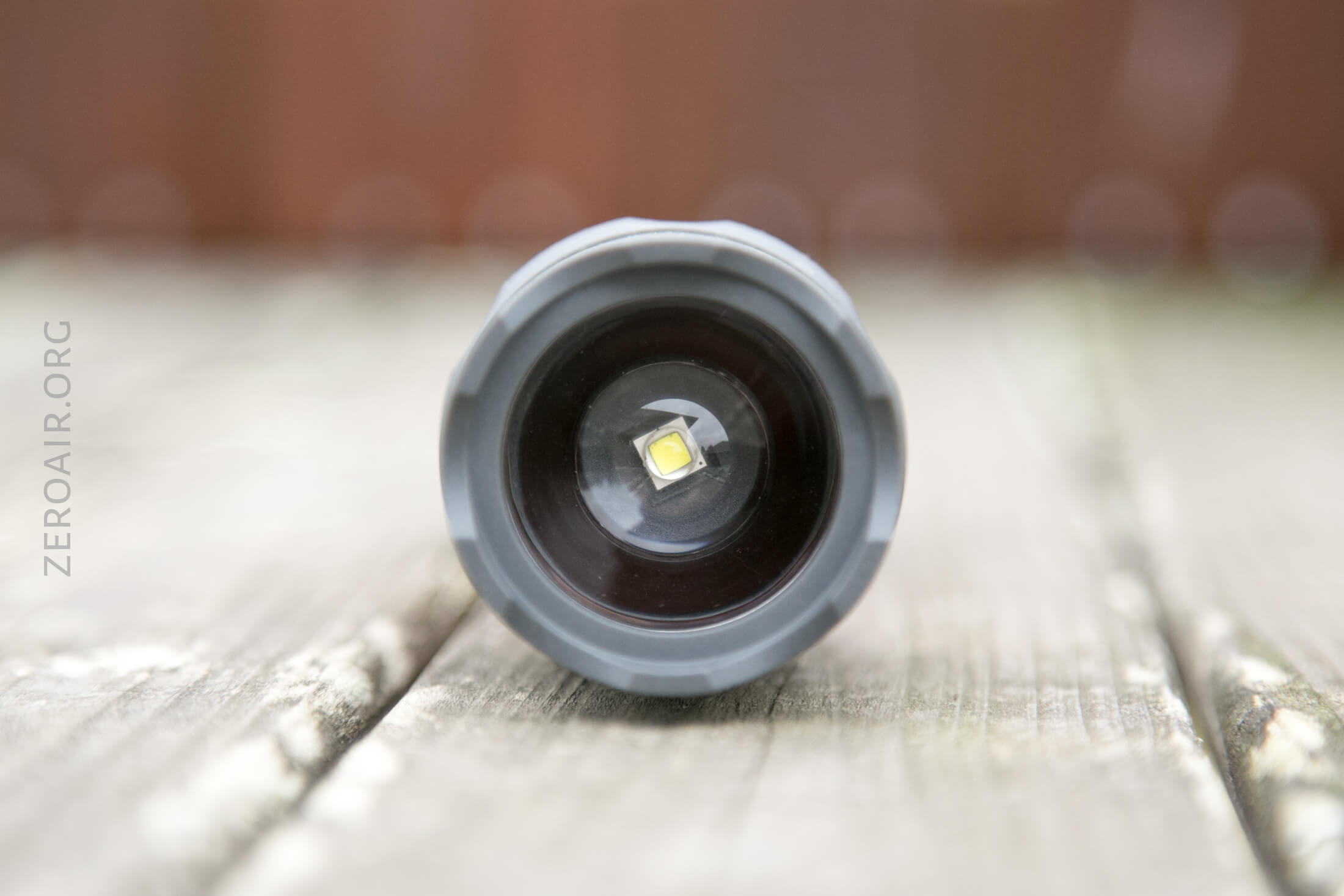 Comparing the photo above to this incredibly handy list on BLF by CRX, I’d say it’s a Cree XM-L2, of unknown (but cool) temperature.

4xAA pack first.  Flood on the left, zoom on the right.

Liion pack second.  The high is noticeably (but little) brighter.

I compare everything to the Killzone 219b BLF-348, because it’s inexpensive and has the best tint!

Here’s a link to a relevantly filtered page on parametrek.com.  I use that site a lot!  Most of those are not zoomie lights, so if zoomie is what you really need, then this could be your choice.