While mostly known for keychain style lights, the RovyVon Aurora A33 is a nice little Penlight, which offers high CRI and 5000K with the Nichia 219c, and a built-in battery (with USB-C charging.)  See how it tests!

Here’s a link to the RovyVon Aurora A33 Penlight product page.

There are a few body colors.  In order, they are:  Dark Green, Desert Tan, Gunmetal, Red, Black

This is a quirky little penlight, which is pretty good.  In particular it’s nice that the A33 offers a high CRI emitter in 5000K.  The lumen output doesn’t even drop that badly when opting for this warmer emitter, so it’s a solid choice.

What’s Included in the RovyVon Aurora A33 Penlight Package 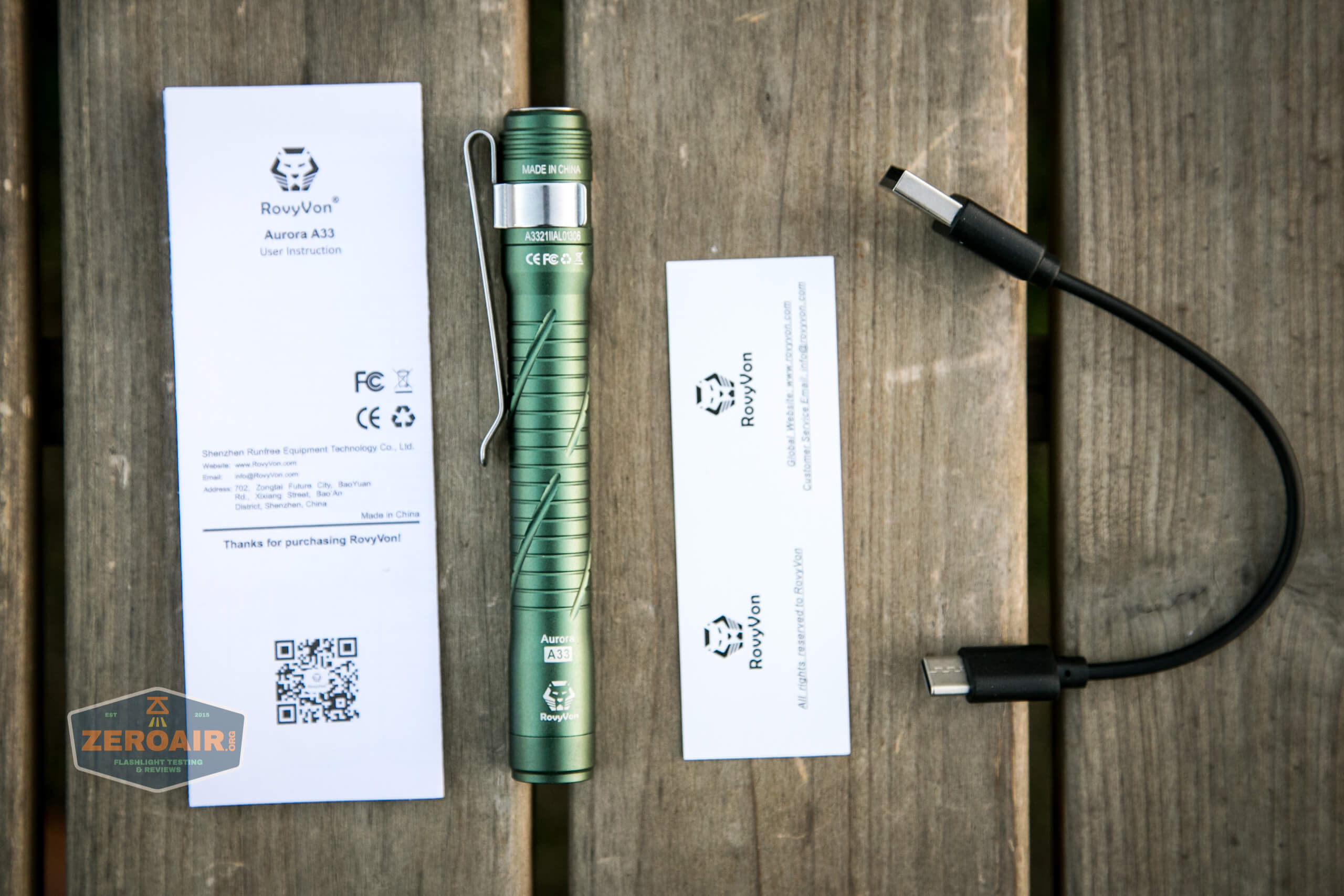 Maybe I just haven’t held enough similar RovyVon lights, but the anodizing on this one feels a little different from other RovyVons.  The feel is good – not glossy and not matte…

This is very much a penlight, though.  If you aren’t into penlights (and maybe it’s a niche market), then this light is probably one you wouldn’t look at twice.

I’m really not sure what the best means of disassembly would be…. I tried both ends and nothing budged.  I would imagine that the switch area can unscrew in some capacity, but I did not make that happen.  In any case that would likely only reveal access to the charge port, a USB-C port in the side.  So access there would probably be limited.

Next would be the bezel, which if like other RovyVon lights, is probably glued.

And here’s the light beside my custom engraved TorchLAB BOSS 35, an 18350 light.  I reviewed the aluminum version of that light in both 35 and 70 format.

The RovyVon Aurora A33 Penlight has a quite nice deep carry pocket clip.  It’s deep carry, one way, and has a nice wide mouth.  Access and usage of this clip is easy and fantastic.

It’s a friction fit clip, and only resides on the tail end of the A33.  It will move around the body too – a fixed position clip would have been nice to have here, since the clip must be in the right spot for charge port access.

That’s it for carry.  No magnet or pouch or any other things like those.

Since I couldn’t disassemble the A33, there are no photos of the 600mAh built-in battery.  As far as I can tell, the battery is not user serviceable, or replaceable, but it is rechargeable.

Here are a few runtimes.  I’m testing out some new runtime setup – you shouldn’t really notice any difference – but if you notice something wrong please let me know!  I’ve upped my efficiency with the new setup.  😀

I can’t really say there’s low voltage protection, but there is a low voltage warning.  This warning is… here on this indicator beside the charge port which will be covered in normal usage:

I guess the idea is that when the output dims dramatically, you’d check to see if the battery is low?  The warning is reported to start (solid red) at 2.7V, and the light will shut off at 2.6V.  I observed both of these events.

The RovyVon Aurora A33 Penlight also has built-in charging, of course (since the battery doesn’t come out, it has to, or its a disposable light.)

Charging happens by way of a USB-C port in the tail.  Below, you can see the charge port “closed” (or “covered”).

An appropriate cable is included – USB to USB-C.  This is a very short (maybe 8 inches) cable.

Charging looks pretty good, and is approximately within the 70 minutes claimed by the manual.

During charging, the indicating LED is “breathing blue.”  Once charging is complete, this indicator is solid blue.

You can see pwm on all modes of the RovyVon Aurora A33 Penlight – at least on a scope.  In person, this is fast enough that you’re unlikely to be able to see it.  Maybe on Moonlight you’d pick it up.  The other modes, very unlikely.

A single switch is used for control of the RovyVon Aurora A33 Penlight.  It’s a tail e-switch, with a metal cover and a metal bezel.  Broadly speaking, I’d say this is a very nice switch, but I really don’t care for the proud bezel.

It’s needful – if it wasn’t there, then accidental activation would be very easy.  Also tailstanding wouldn’t be as ideal.

But this is a very minor gripe.  As far as usage goes, it’s absolutely fantastic – it’s everything an e-switch tailswitch light like the FW series lights by Lumintop should be.  The action is very low – probably half a mm or so to click.

And my biggest gripe about the switch is this – when the charge port is exposed, the switch is shrouded.  It’s still accessible, and it still works, but … well this is a strange design feature.

As I said, this proud bezel does allow the A33 to tailstand.

Here’s a UI table!  There are actually two “Channels” – Channel 1 is described as having no mode memory, and Channel 2 as having mode memory.  But there’s no description on how to switch between the two and the interface appears the same entirely.  “Channel 2” just adds the statement of “Double click to enter memorized mode.”

The point is there doesn’t really seem to be “two channels” – double click from off only accesses the memorized mode.  Hold from off only accesses Moonlight.  So it seems like the wording in the manual is just a little confusing, when overall it’s a good UI – memory for those who want it.  No memory for those who don’t, all in one convenient place.

The A33 uses a TIR, which is largely clear, and provides a fairly tight beam.

Test light is on the left!