The Convoy L8 is a new flashlight from Convoy that uses a single 26800 cell. Fortunately, the QB26800 is included! Read on for more testing.

Here’s a link to the ​Convoy L8 flashlight page.

Looks like there’s just one version of the Convoy L8 flashlight at this time!

The going price of this great thrower is currently $89.24.

Rare is the case that the hype train for a cell is higher than for a flashlight.  But the QB26800 has hit hard.  And with good reason!  This high current 26800 cell does hit hard.  But the Convoy L8 is worthy of praise on its own.  This single emitter light really has great output and is just overall so flashlighty.  To me, it definitely seems worth the going price. 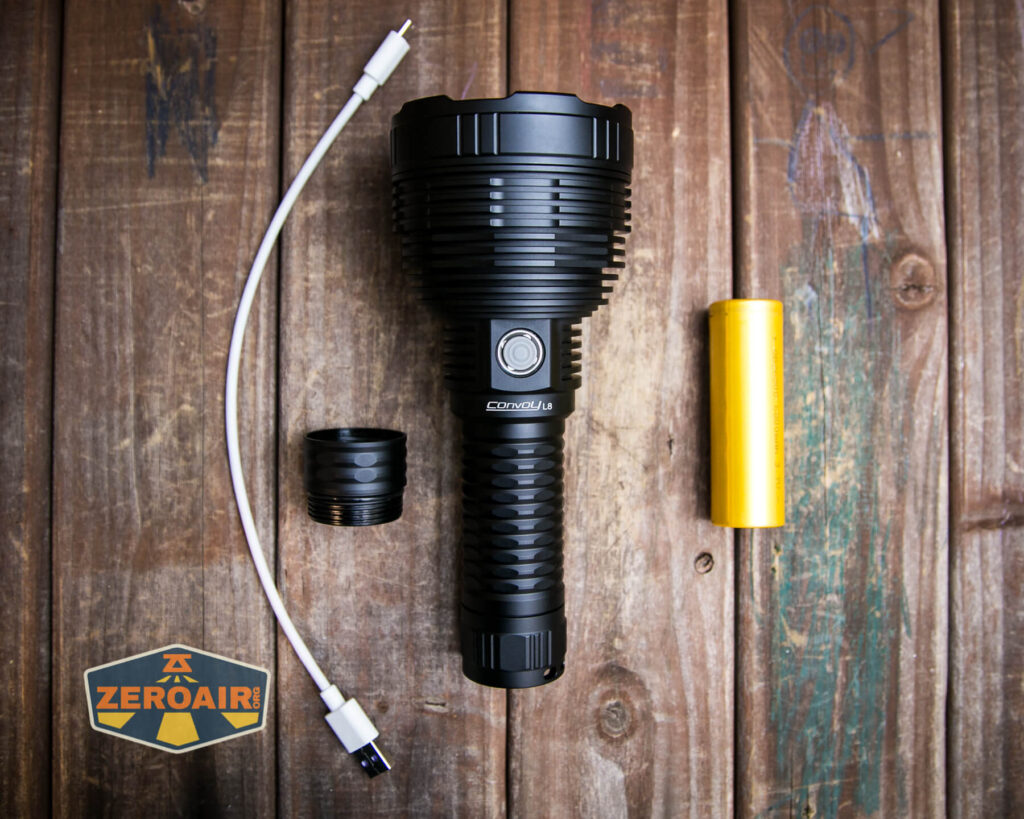 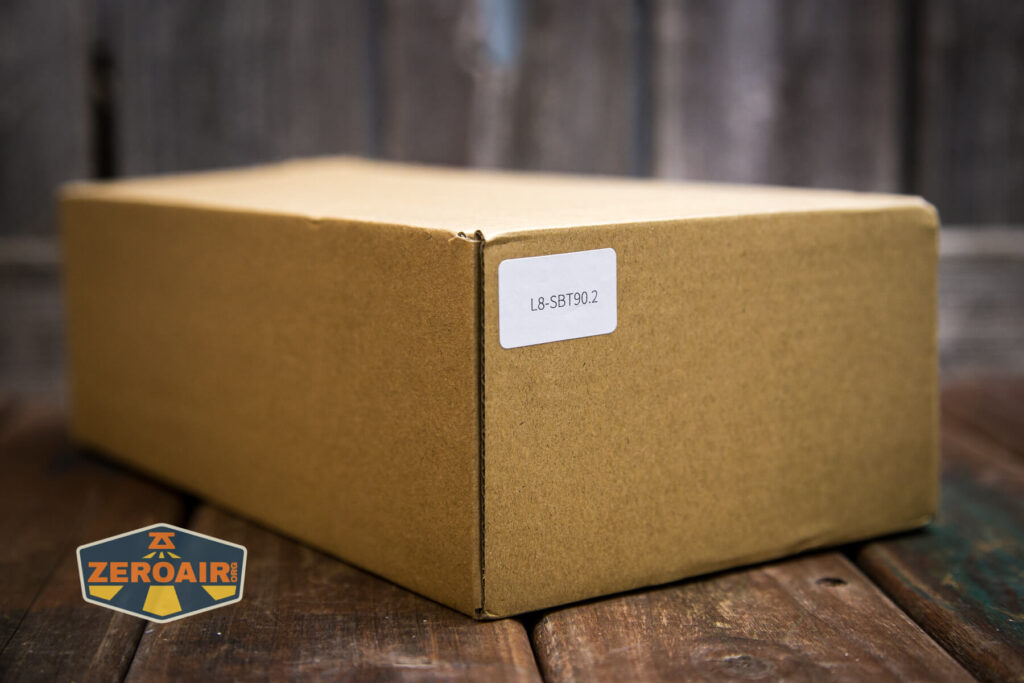 There is no manual included. 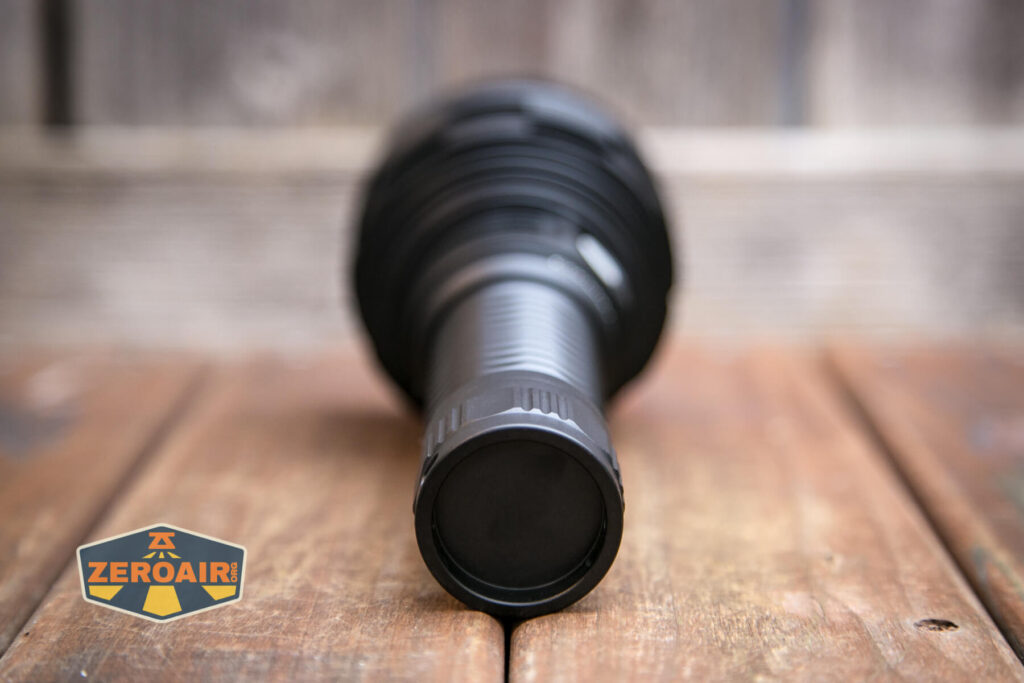 Convoy here uses a grip pattern in the cell tube that I don’t think we’ve seen before.  On this large light (with the 26mm diameter cell) the pattern is great!  It’d probably be great on smaller lights, too. 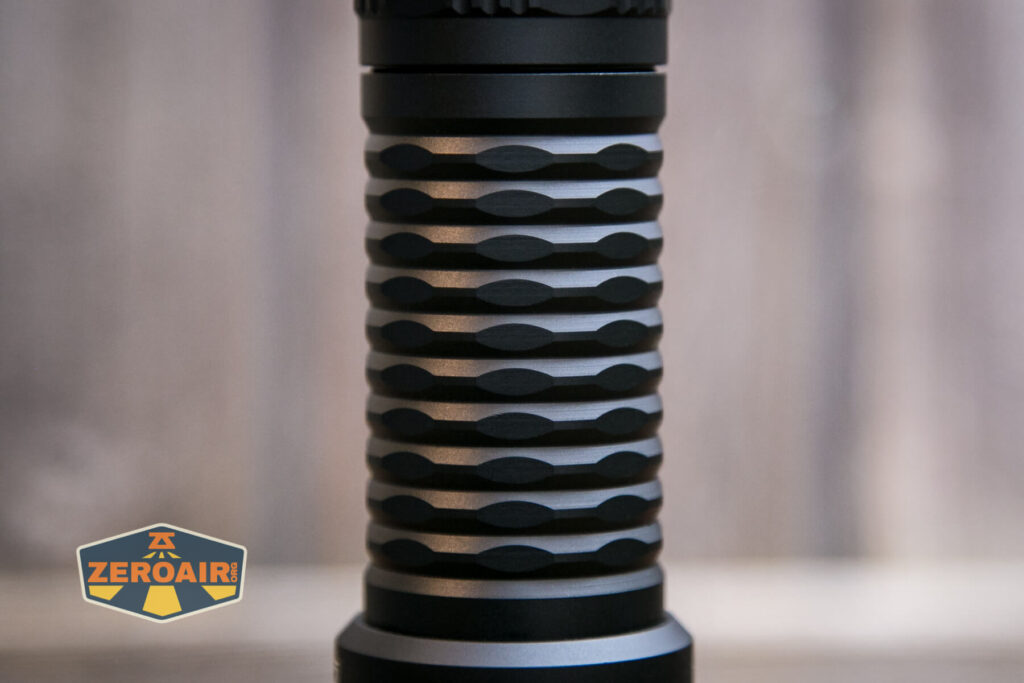 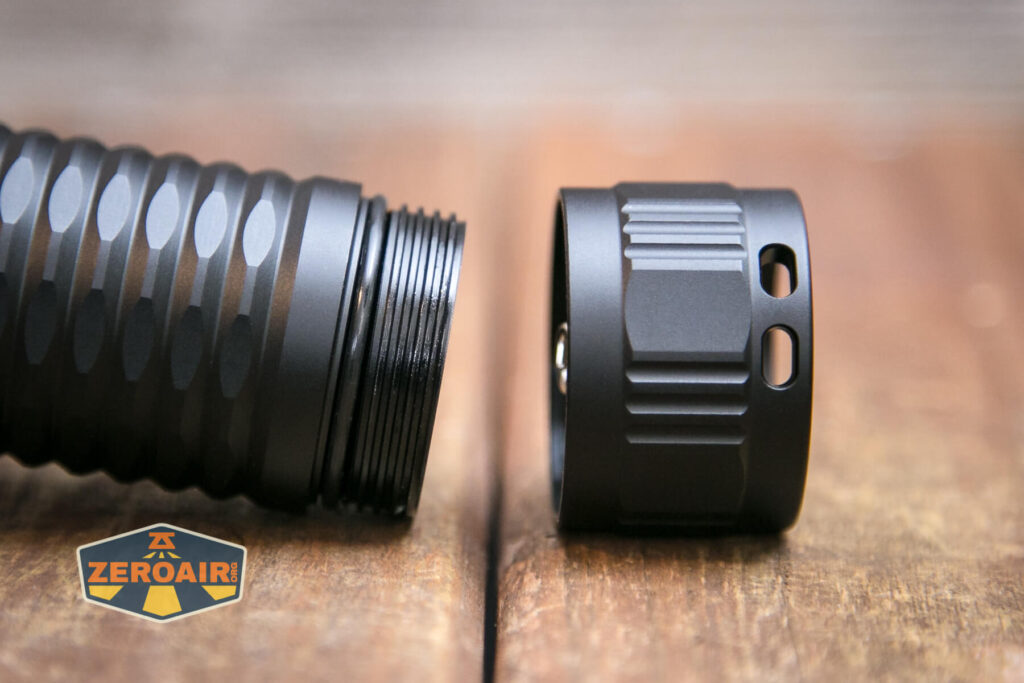 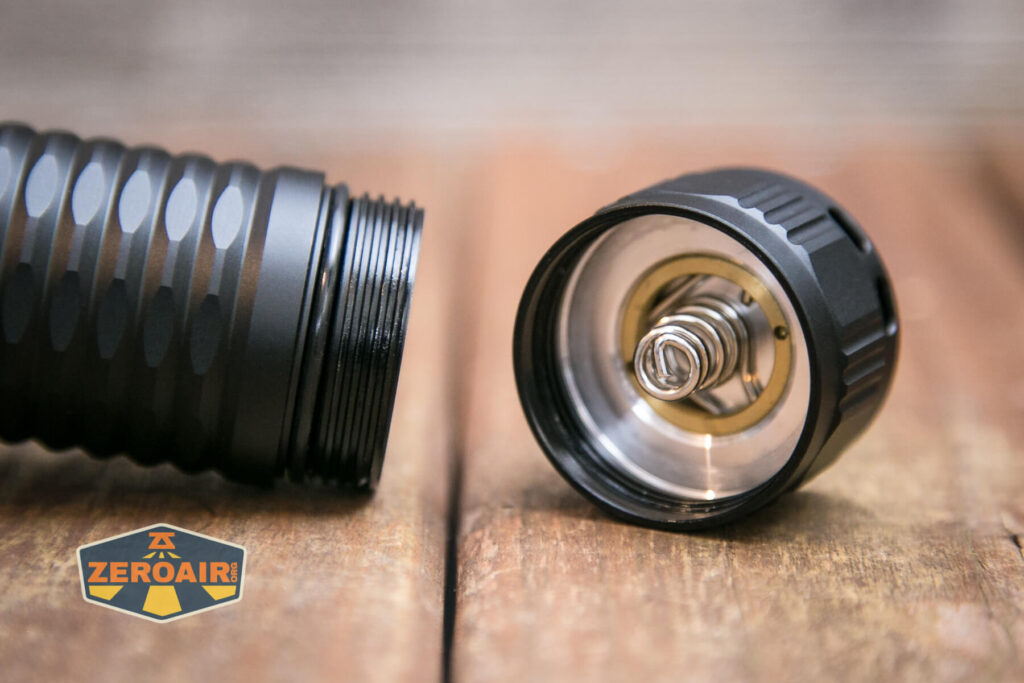 The cell tube is not reversible.  (And there’d be no point in reversing it, really.) 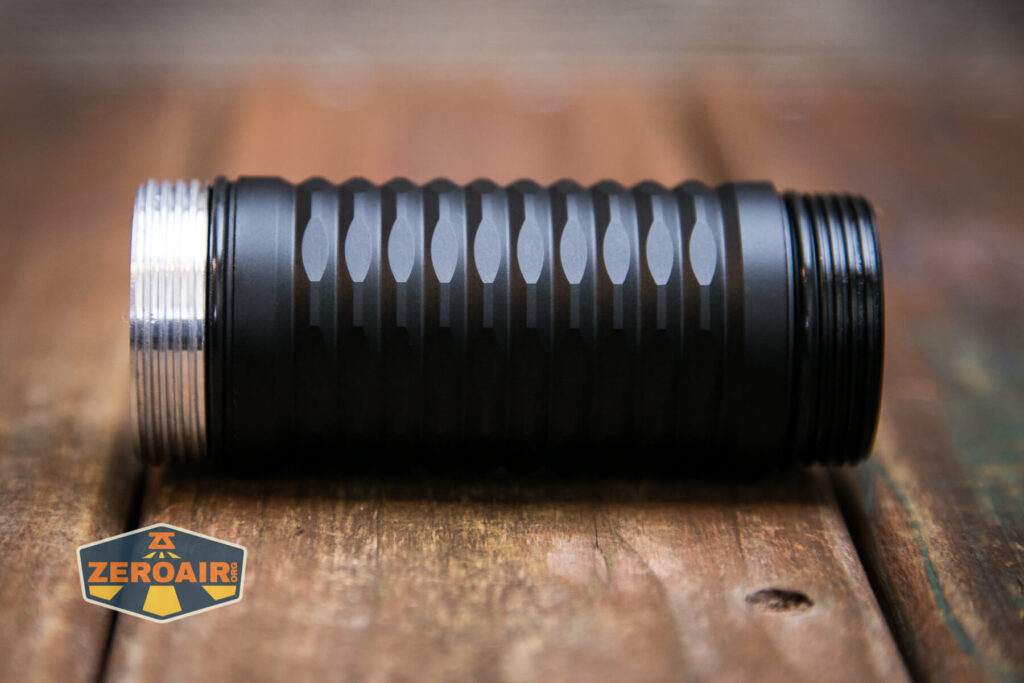 Check out the contacts inside this light.  The tailcap gets a long super beefy spring.  The head doesn’t have a spring, but this brass contact is also quite beefy.  And otherwise, just check out all this contact area for these potentially high currents – there’s a lot of brass and aluminum here! 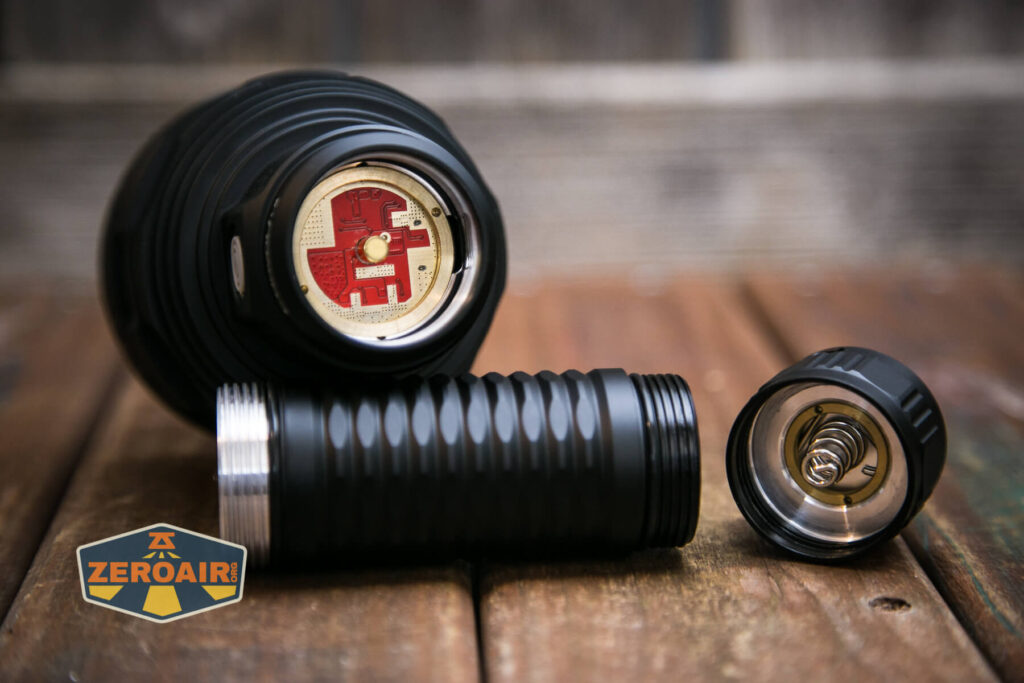 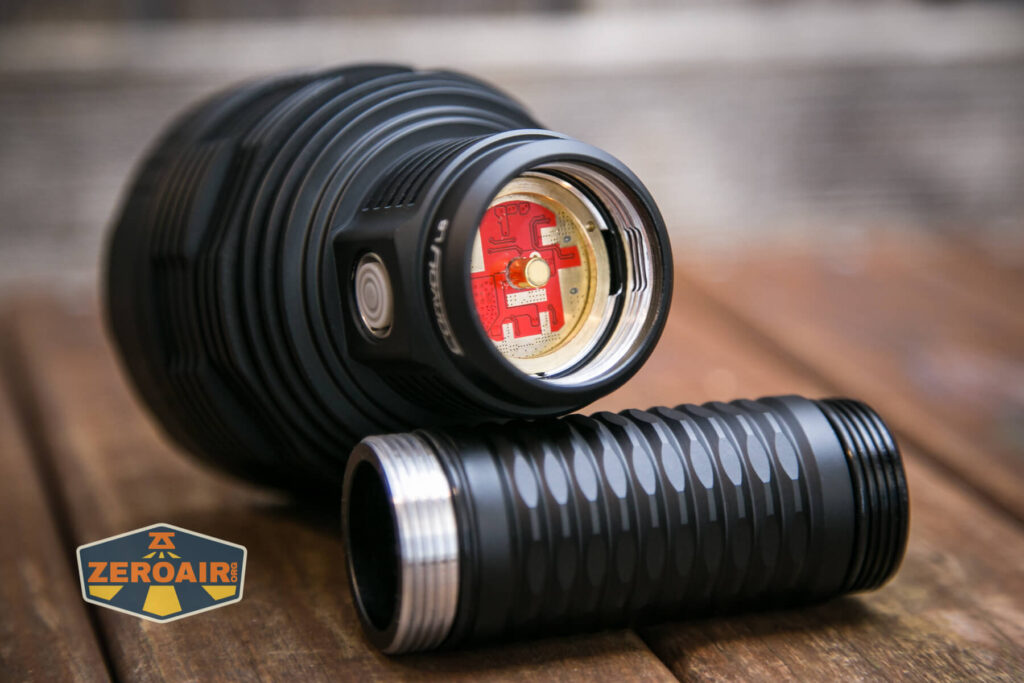 I’m not going to talk too much about this extension tube, but here’s the extension that would allow using a single 26980 cell.  I’m not even sure you can get a 26980 cell now, so I’m not entirely sure what’s the point.  I don’t think this could be used with any 2-up setups, either.  The product page does not list a working voltage range, so I’d be skeptical putting two cells (whatever cells you’re thinking) in series in this light. Also unfortunately this extension tube can not replace the main cell tube and allow the use of, say, a single 26350.  Now that’d be a fun shorty Convoy L8… 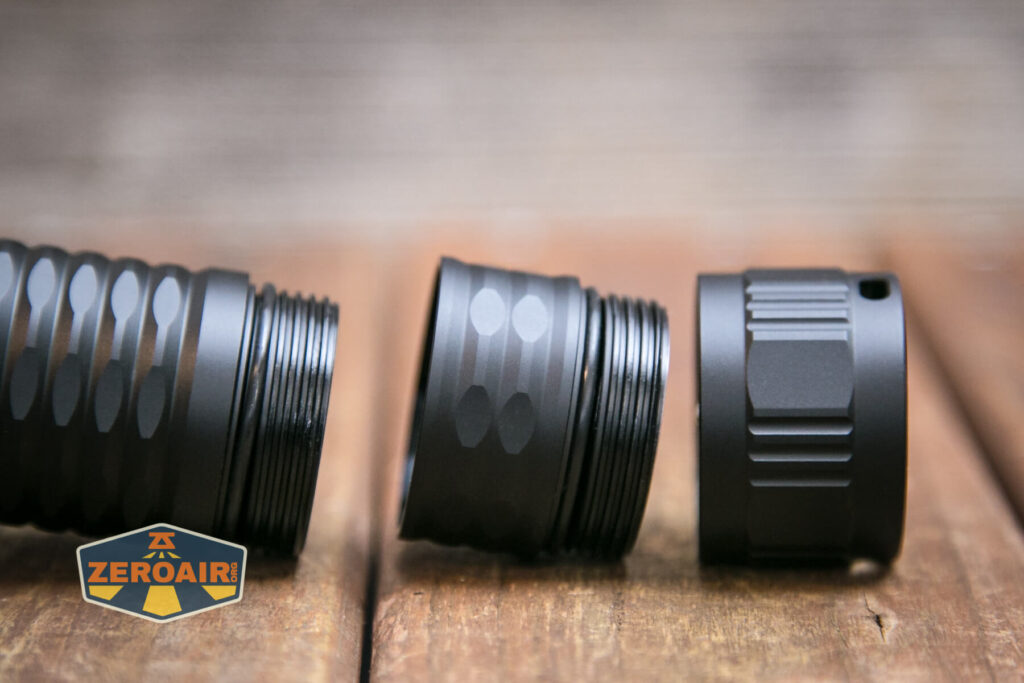 The head and part way down the body has some very good cooling fins. 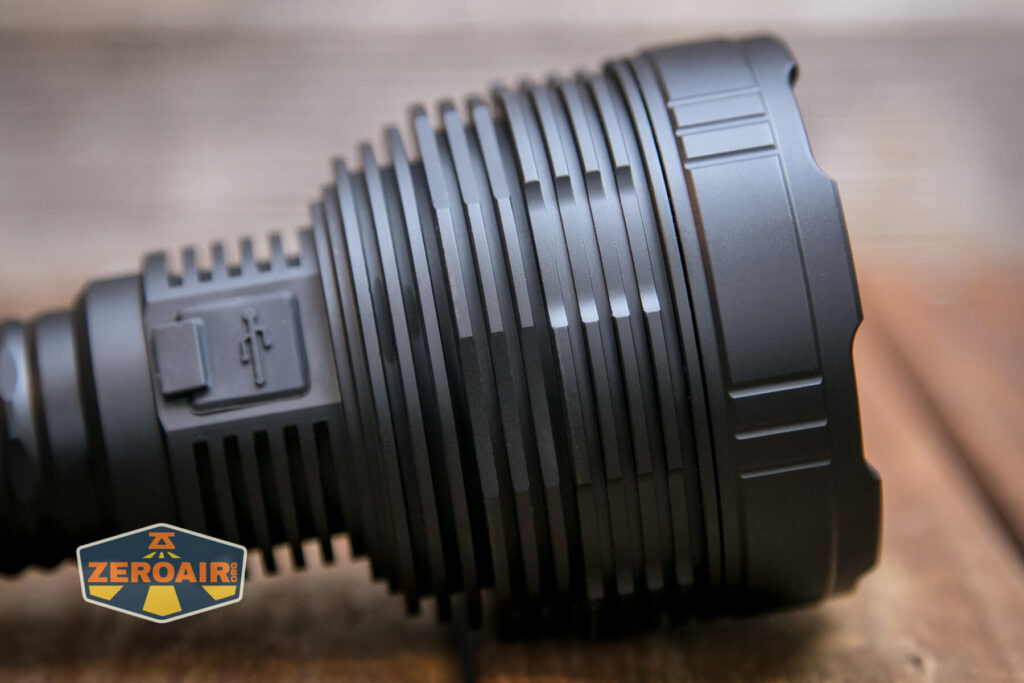 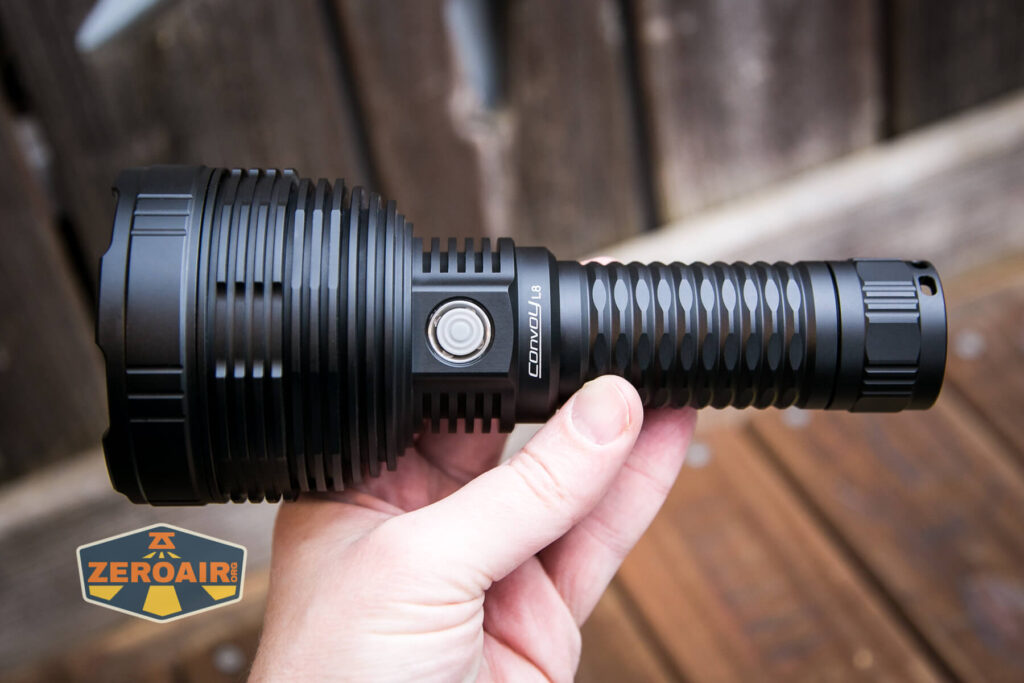 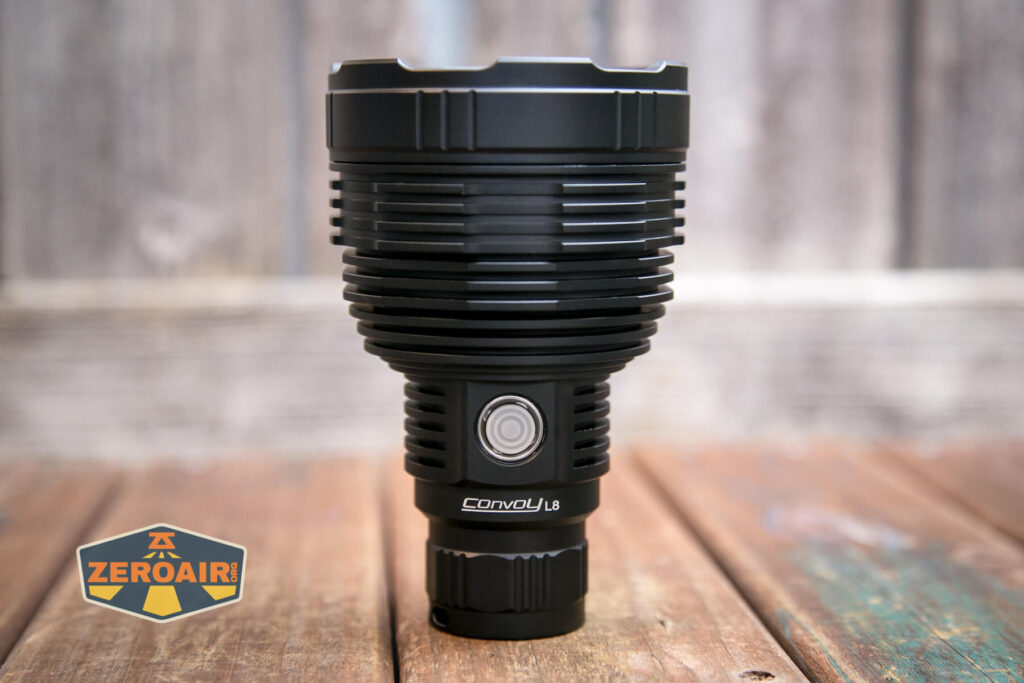 Nothing is really included for carrying of the Convoy L8.  If you happen to have your own lanyard, you could attach it through either of the sets of holes in the tailcap, though. 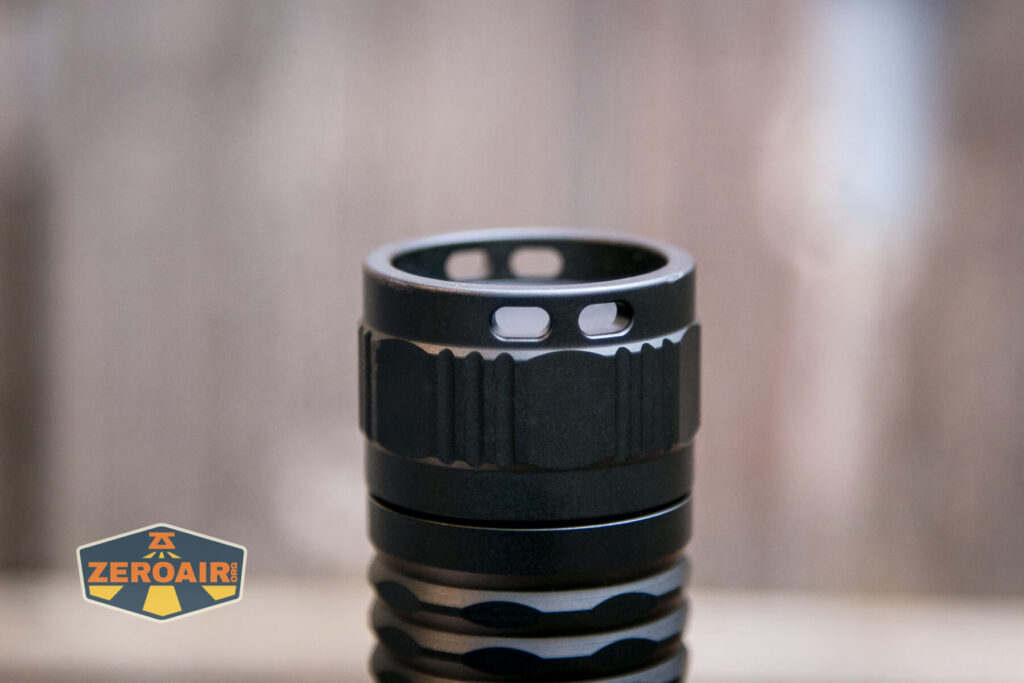 But otherwise, there is nothing:  no pocket clip (belt clip?  any kind of clip…) or pouch.

As stated ample times above – the Convoy L8 is powered by a 26800 cell.  You should buy the one offered by Convoy, too.  Unless you already have one, at least – I’m not sure what other 26800 cell you can even buy at this time!

These cells (separately) aren’t cheap, either.  In fact, the parts alone from this L8 make it quite a value – this 26800 cell is probably around $10 by itself, and the emitter used here is Not Cheap™.  I’d hate to quote a price but I think I’ve heard the emitter can run around $75…  This means just these two parts make the total value of the light.  Incredible.

Anyway, the lithium-ion cell is installed into the L8 in the usual way – the positive terminal goes toward the head. 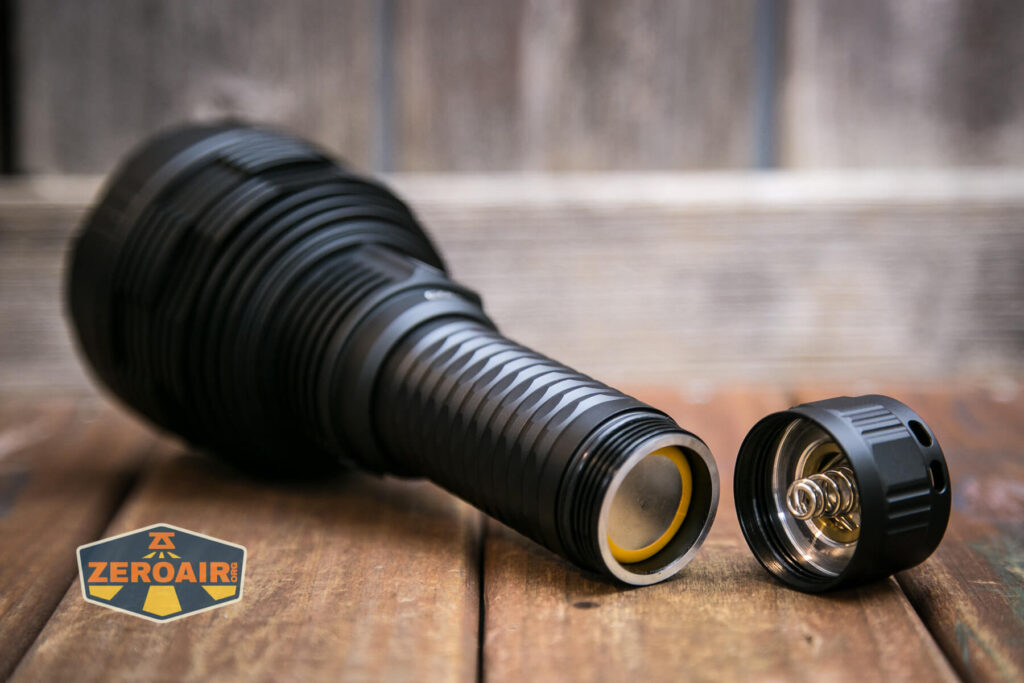 You could go either way here – tailcap off or head of, but since the tailcap threads are anodized (and the head threads aren’t), the user experience will be much better doing cell swaps through the tail end. 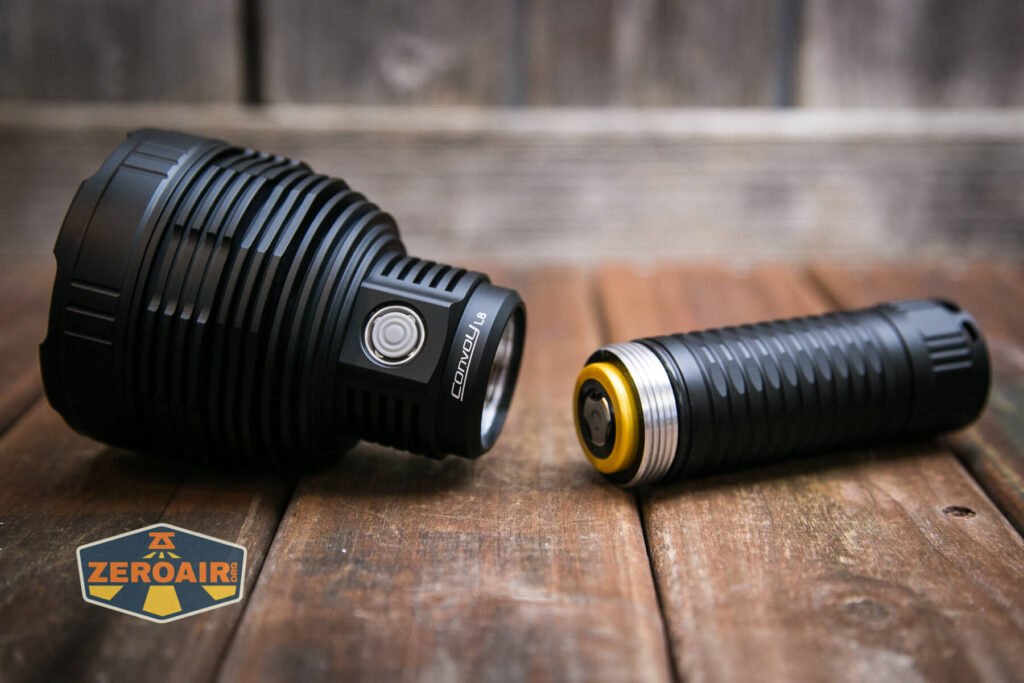 Hopefully we’ll never see button top or protected 26800 cells, and we can always trust that these are exactly the named dimensions (26mm x 80mm).  This cell is of course a flat top. 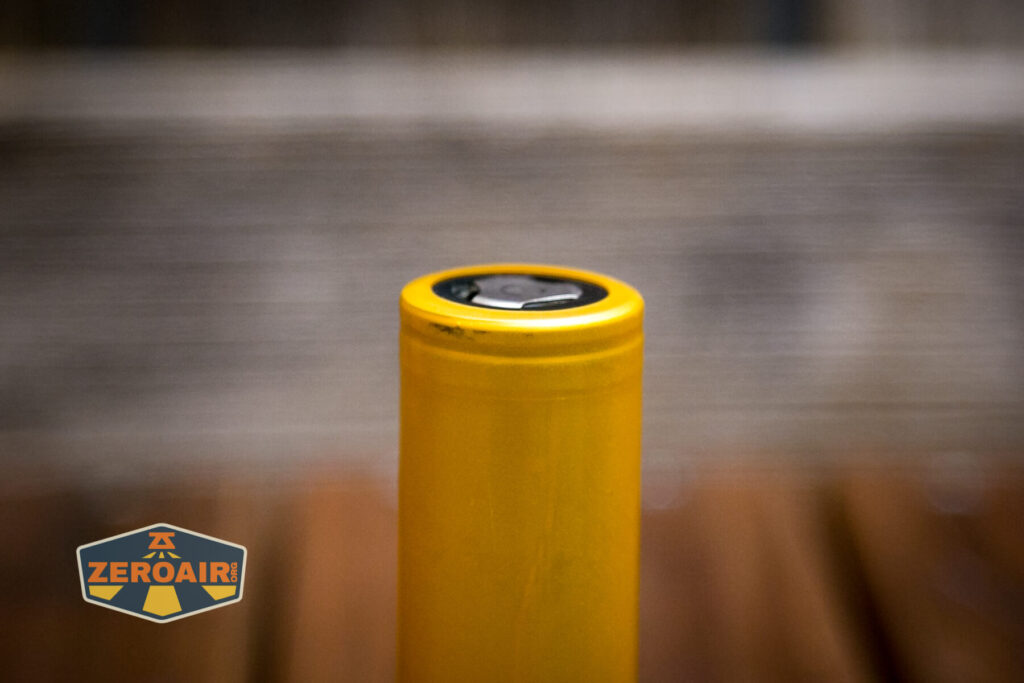 It’s really not a small cell. 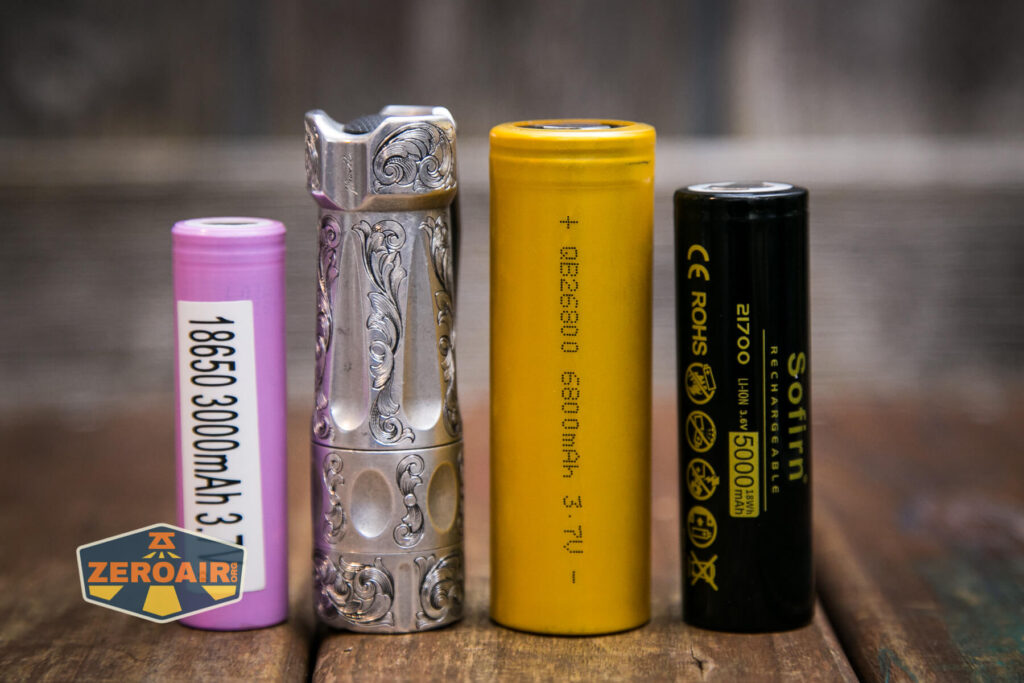 However, we do have other cells that are similar enough.  The 26650 for example is the same diameter, but the 26800 is just 15mm longer. So while comparatively rare, the 26800 won’t really feel too dissimilar to other cells you’ve probably had. 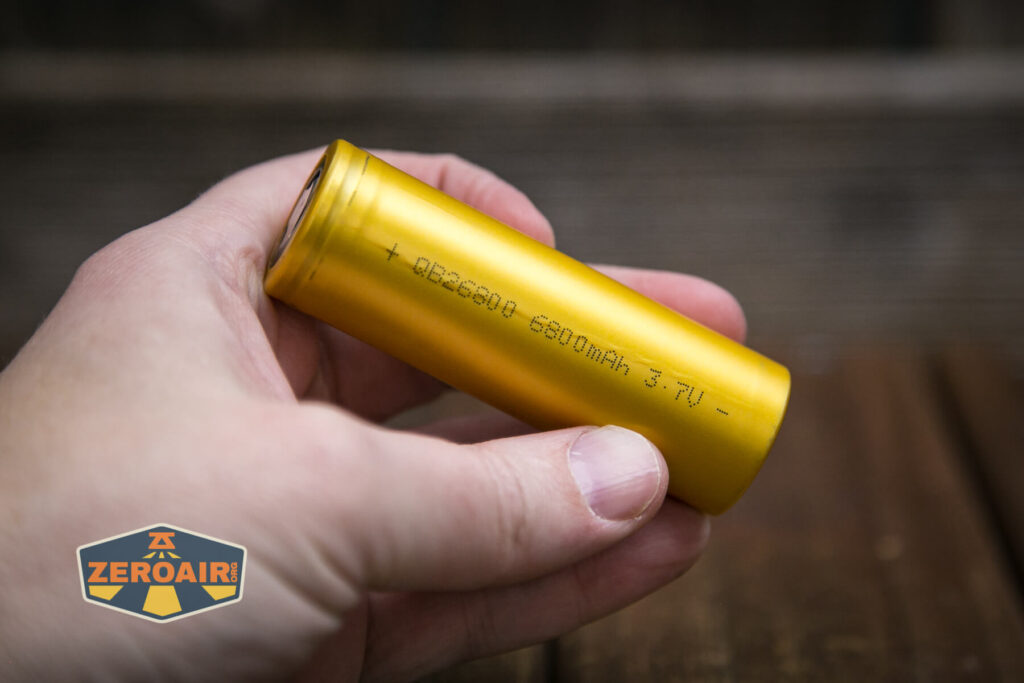 Here are a couple of views of the L8 with the extension tube installed. 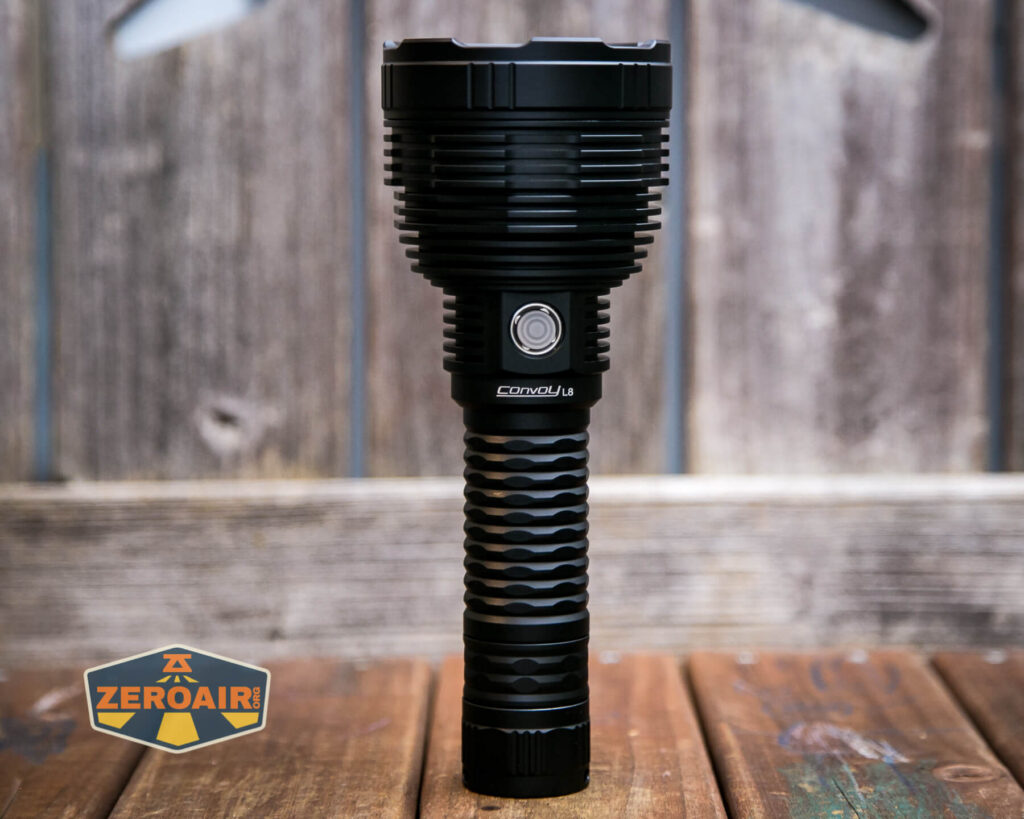 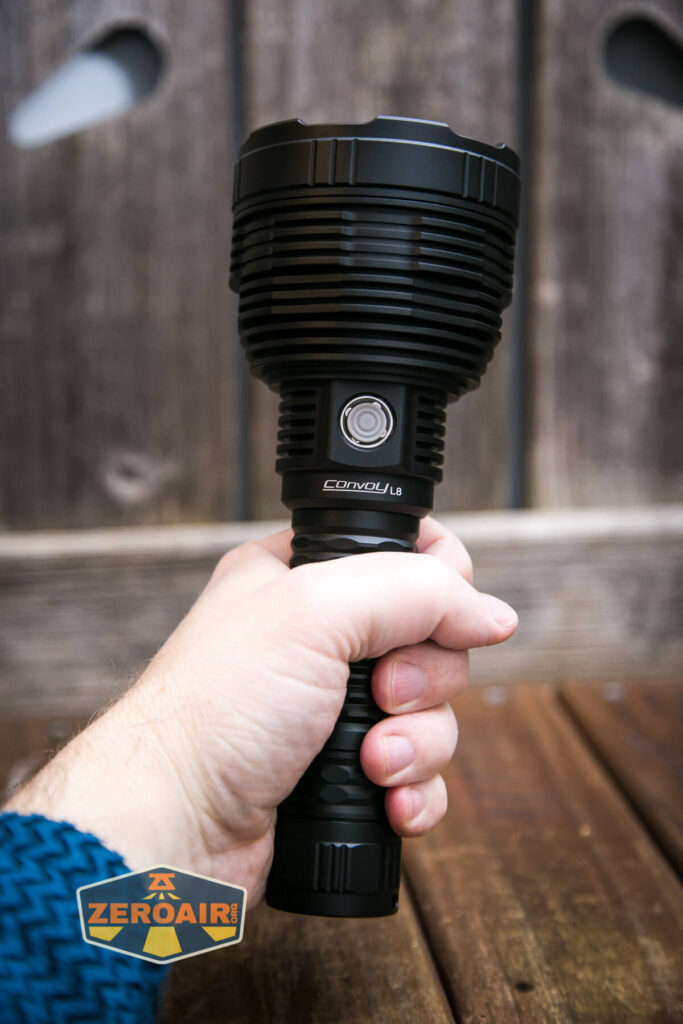 Despite checking the Convoy L8 flashlight page over and over, it never described a stepped output setup.  Ramping is great of course but for testing purposes, it’s nice to be able to test something specific.  So what I’ve tested here is simply the highest output level and “some other level.”  That should adequately describe the driver performance though (probably.)

The product page only says that 6400 lumens is the theoretical max, but in reality, I’m sure Convoy expects something lower.  And per the test above, something lower is what we see.  Still, well over 4000 lumens for a minute is not bad at all. 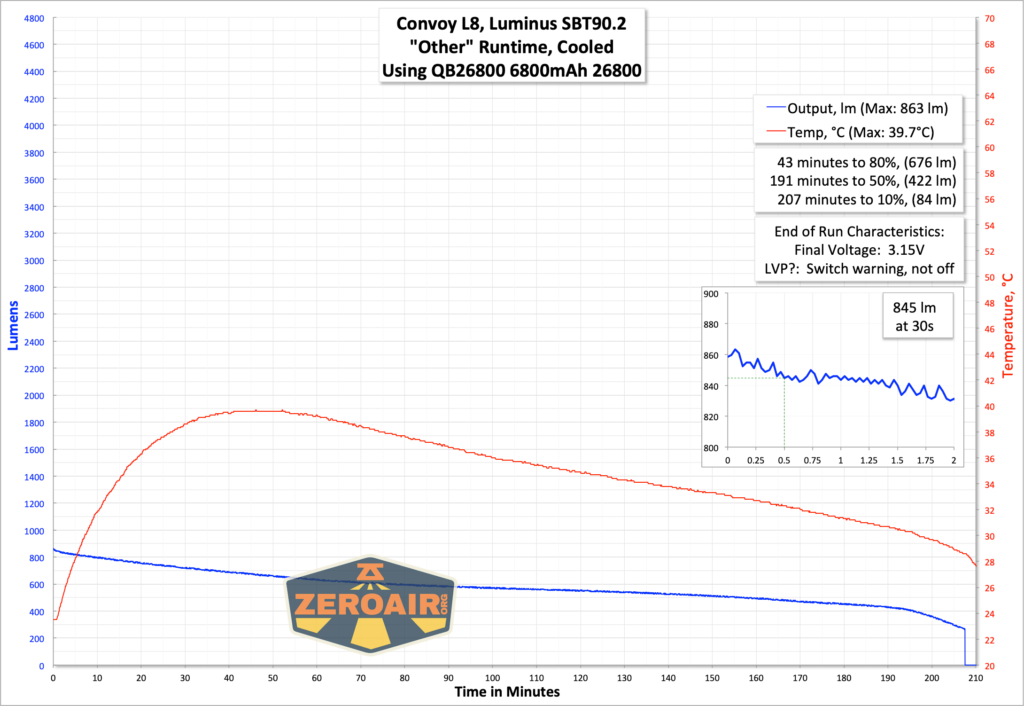 The switch does begin to blink when the cell voltage is low.  On bench power that red blinking indicator seems to be around 2.9V.

The Convoy L8 includes built-in charging, too.  There’s a USB-C port in the head, opposite to the switch.

This charging port cover is “fine” but I could stand for it to be a bit sturdier.  It’s just a little flimsy.  It does fit well, however. 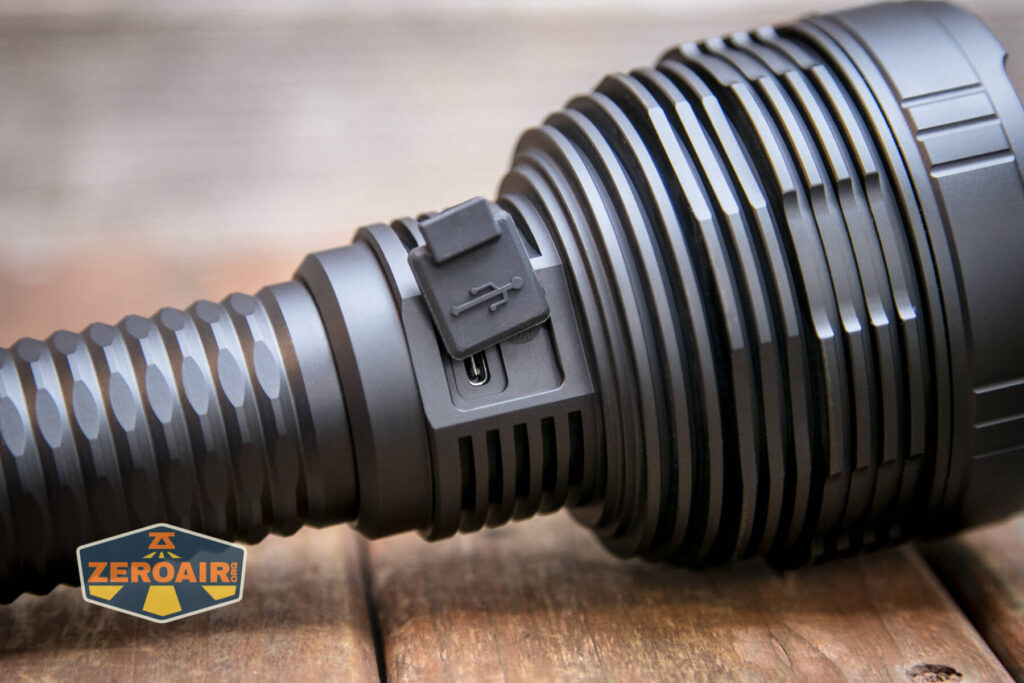 Here’s a charging graph using the intended charge method:  USB to USB-C.  Convoy claims charging at 3A, and that’s actually what I did observe. I’d be surprised if most USB ports could output 3A, so be sure to charge this from a high-quality source. 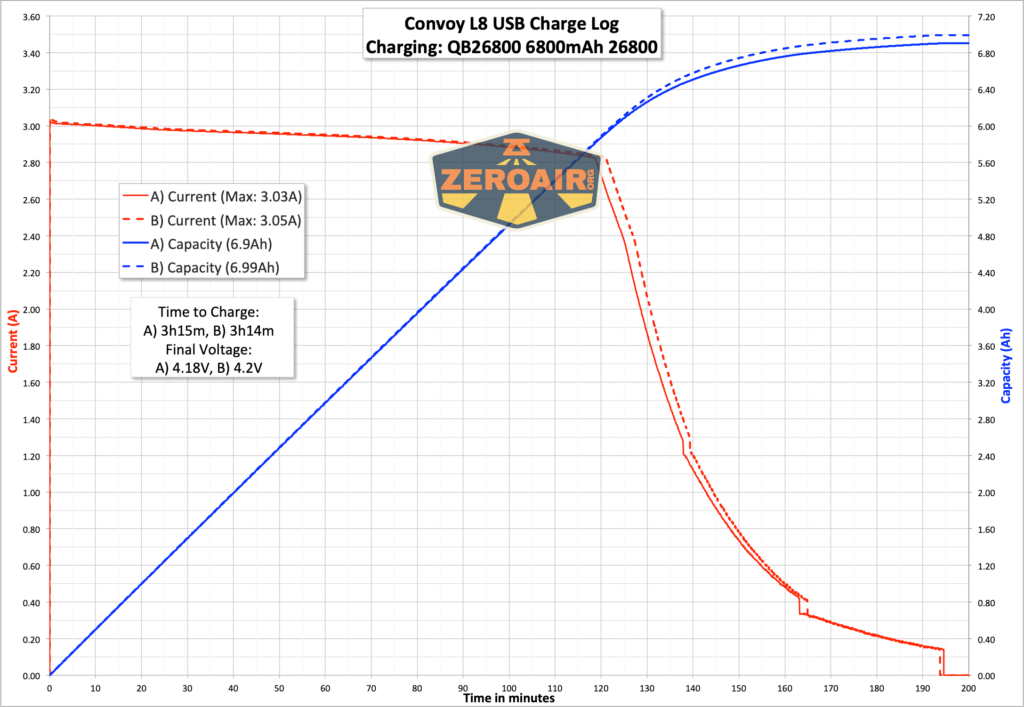 During charging, the switch blinks red. When charging is complete, the switch turns green.

While I was able to get one USB-C to USB-C charging setup to work (technically), all the other C to C setups I tried did not work.  So I don’t think the L8 really works C to C.  And if so, it still seems to be at 5V and 3A.

Any mode except Turbo does use PWM.  The PWM seems very fast to me though, and I didn’t notice it during use.

The Convoy L8 has a single e-switch for operation.  This switch is an indicating e-switch that can indicate in red or green. 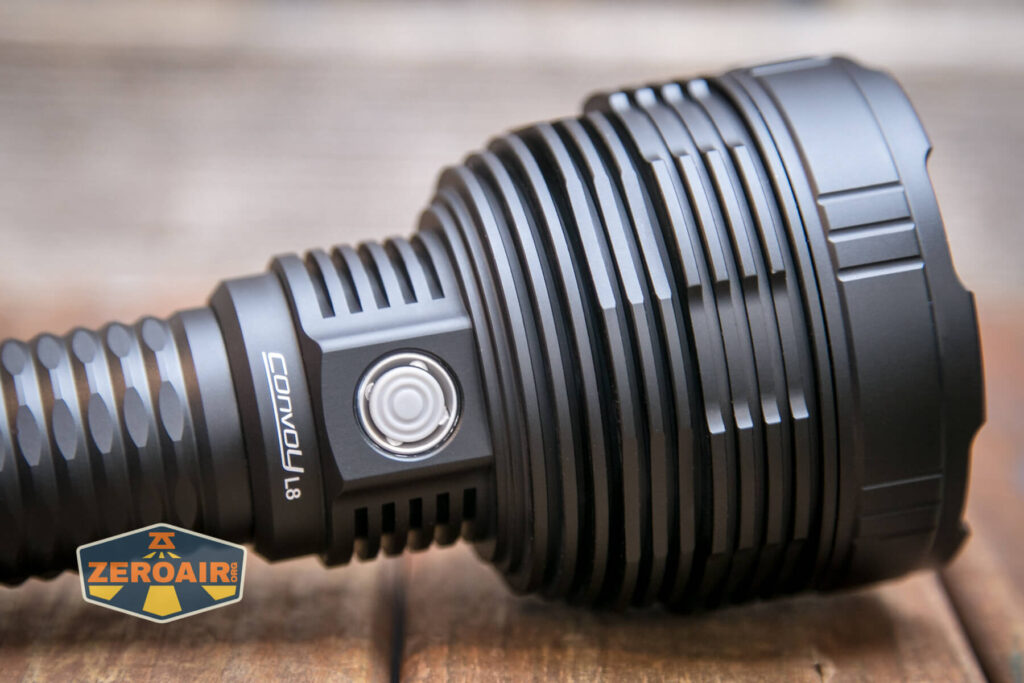 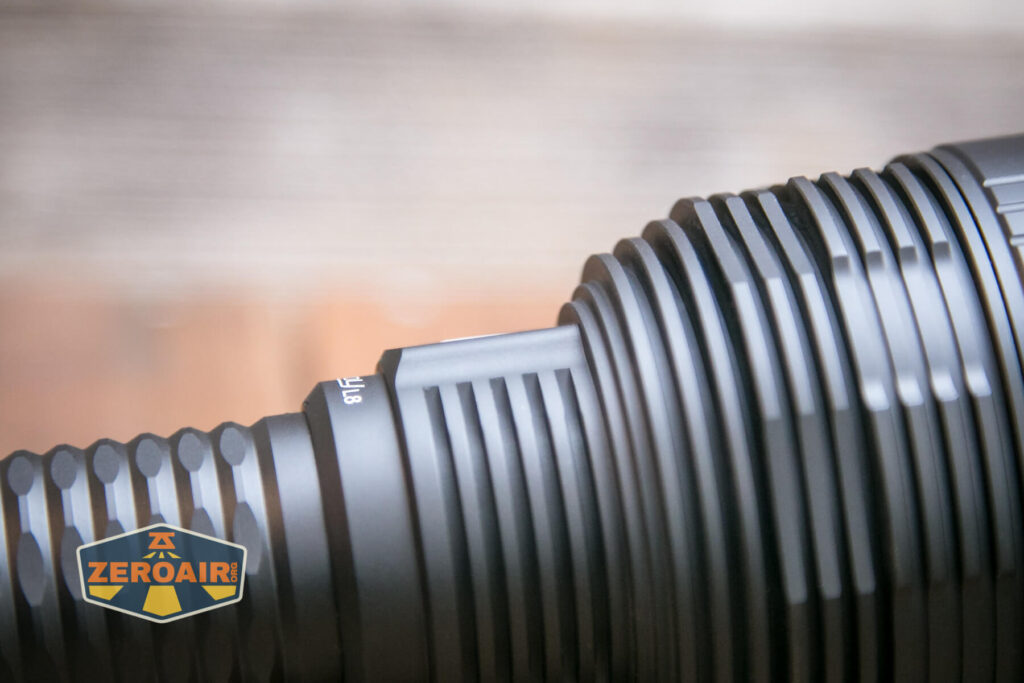 The switch is “fine” but it does need to be pressed right in the center.  Pressing on the edge doesn’t always give the desired result (that is, a click) so sometimes you might end up ramping up instead of down (because your first click didn’t register).  But with practice or just with being deliberate, you shouldn’t have any problems.

Convoy uses a Luminus SBT90.2 emitter in the L8.  As I said above, this emitter alone is quite costly, so the value of the Convoy L8 as a whole is quite great! 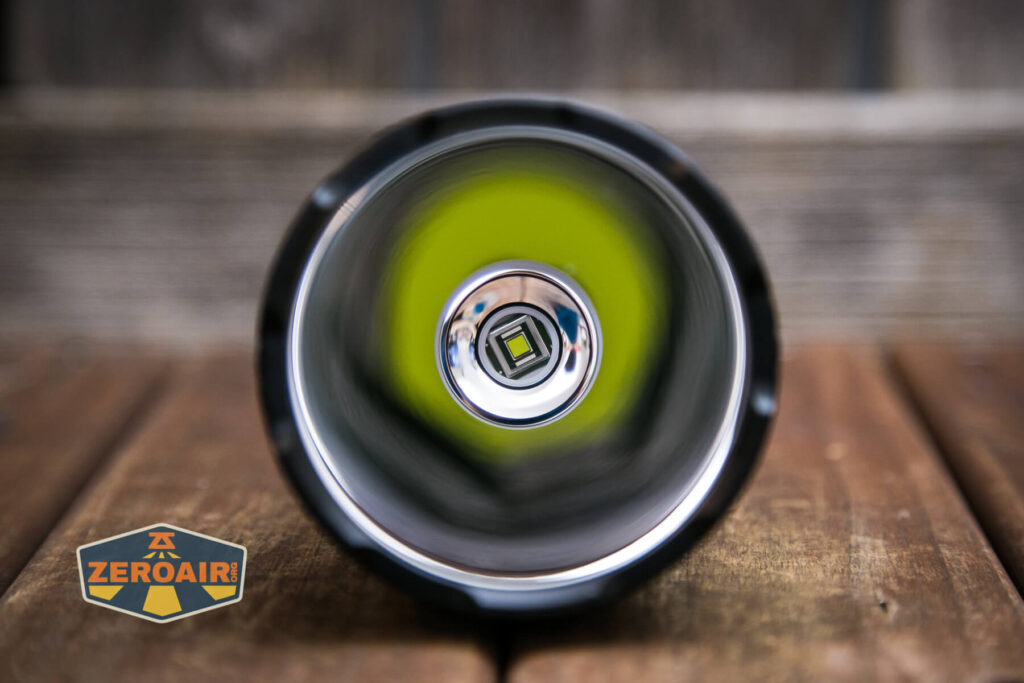 Convoy pairs this big emitter with a big smooth reflector. 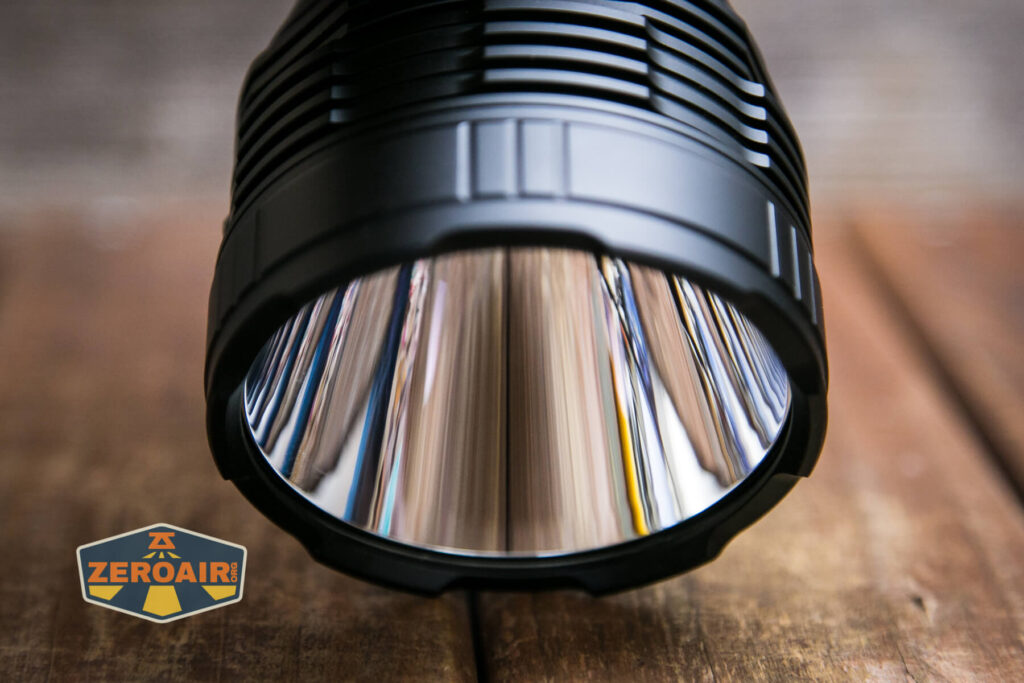 On the bezel are flutes of a sort, and light will escape when headstanding. 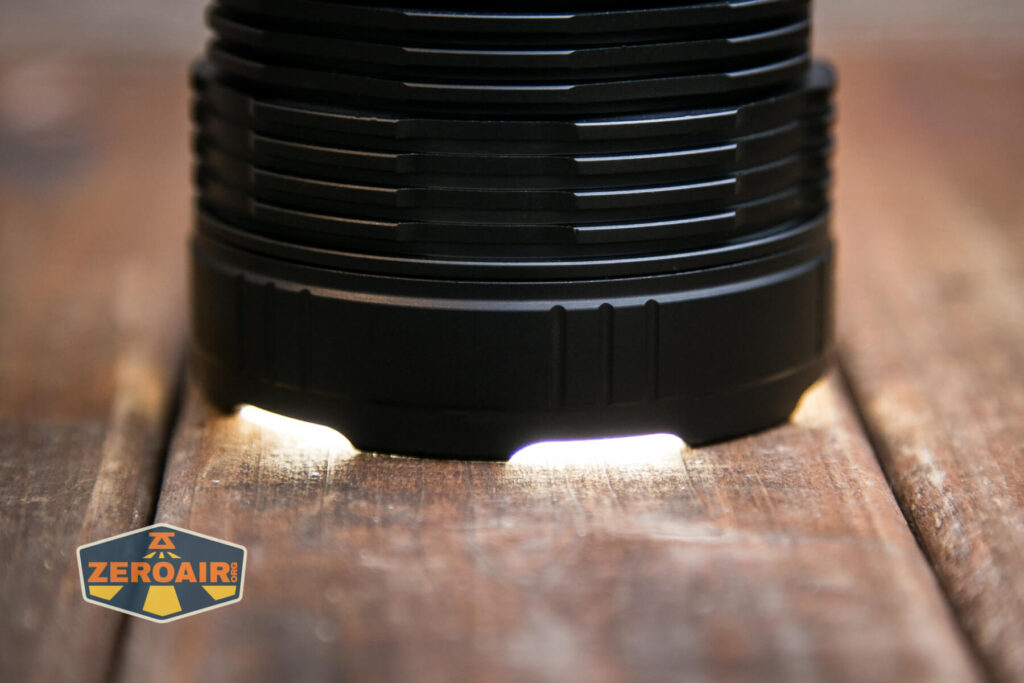 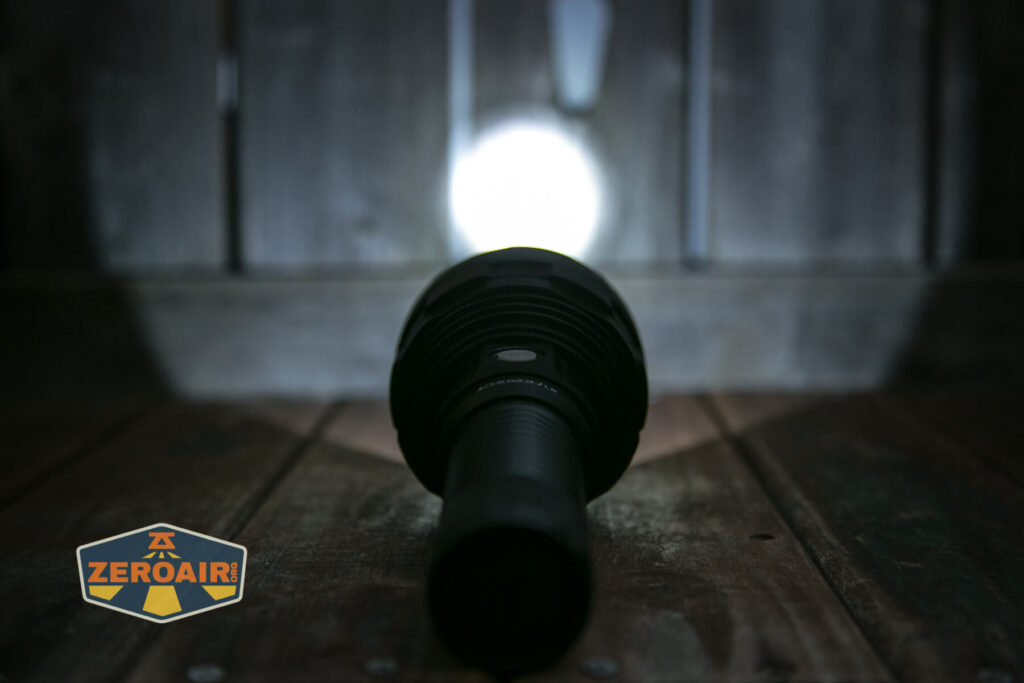 Again there aren’t any stepped output levels, so I’ve just picked a couple of middle outputs along with the lowest and highest.  Even at the highest output level, we’re only seeing around 6100K, which isn’t too cool.  CRI is unfortunately low, though.

Honestly, all those people making hacked setups to charge their 26800 cells should just buy this light as a charger if for no other reason.  It’s a great light, and the value is definitely there.