Here’s another in light from the Olight family, and one that I was quite excited and expectant for, and very happy to have! This was sent to me by Olight, through Going Gear. Special thanks to Going Gear for sending these my way! Thanks u/storl!

There are two versions: Cool White (CW) and Neutral White (NW). Both are shown in this review. The versions are physically the same, except for the markings etched (or laser printed?) into the side.

I have been carrying this light for weeks now, and I absolutely love it. The size is perfect to be a second/backup light, and as a headlamp, its perfect. I prefer the NW, of course. 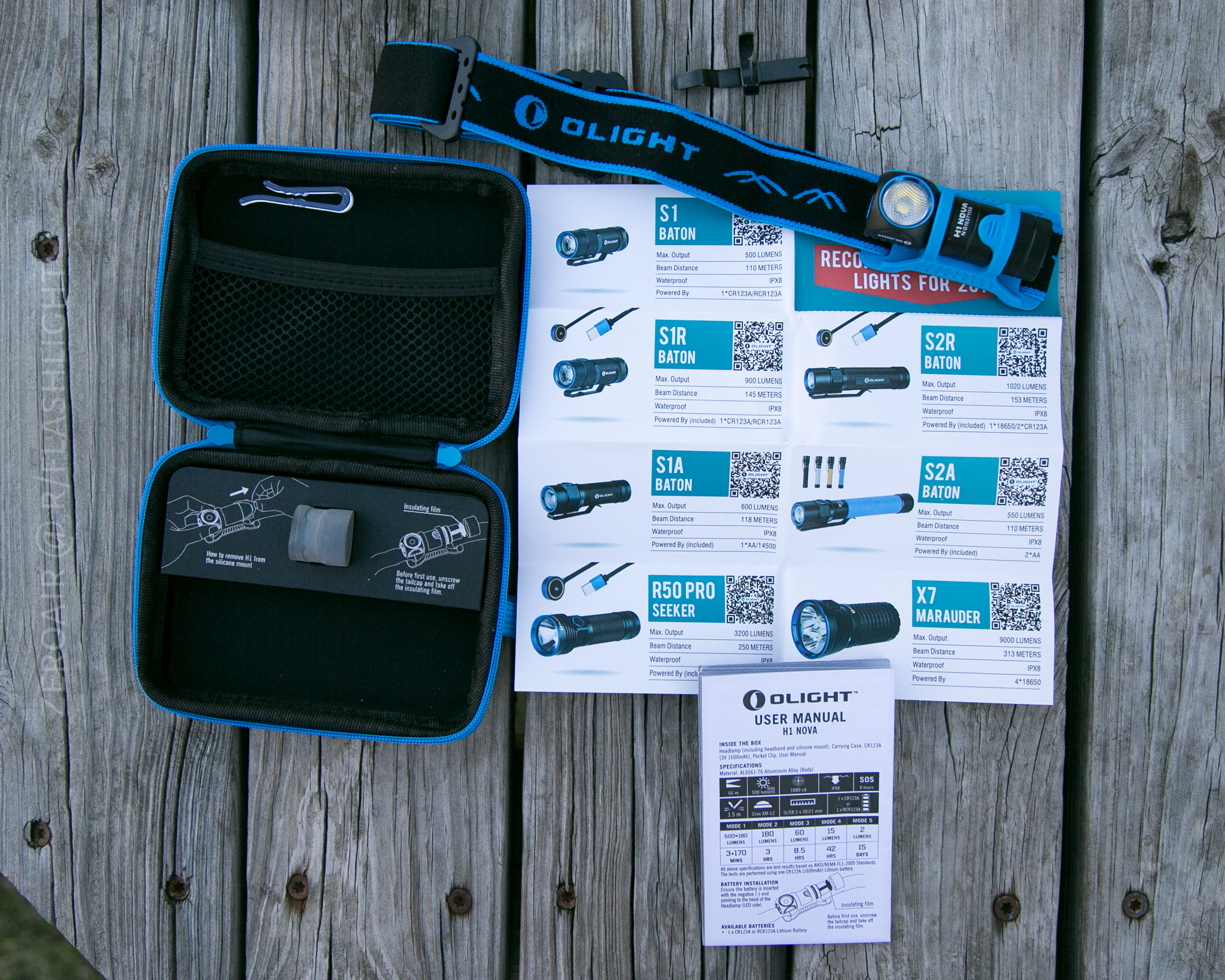 In some ways this is a normal Olight package. But inside is the carry case, which is unusual. The package is cardboard with some clear parts, and is overall, a display-hang ready package. It’s also nice that it’s not an overly complicated package like some of their other lights (ie the Baton R series). Inside the package (and the only part visible from outside the package) is the carry case, which houses all the parts. Note that these lights are serialized. 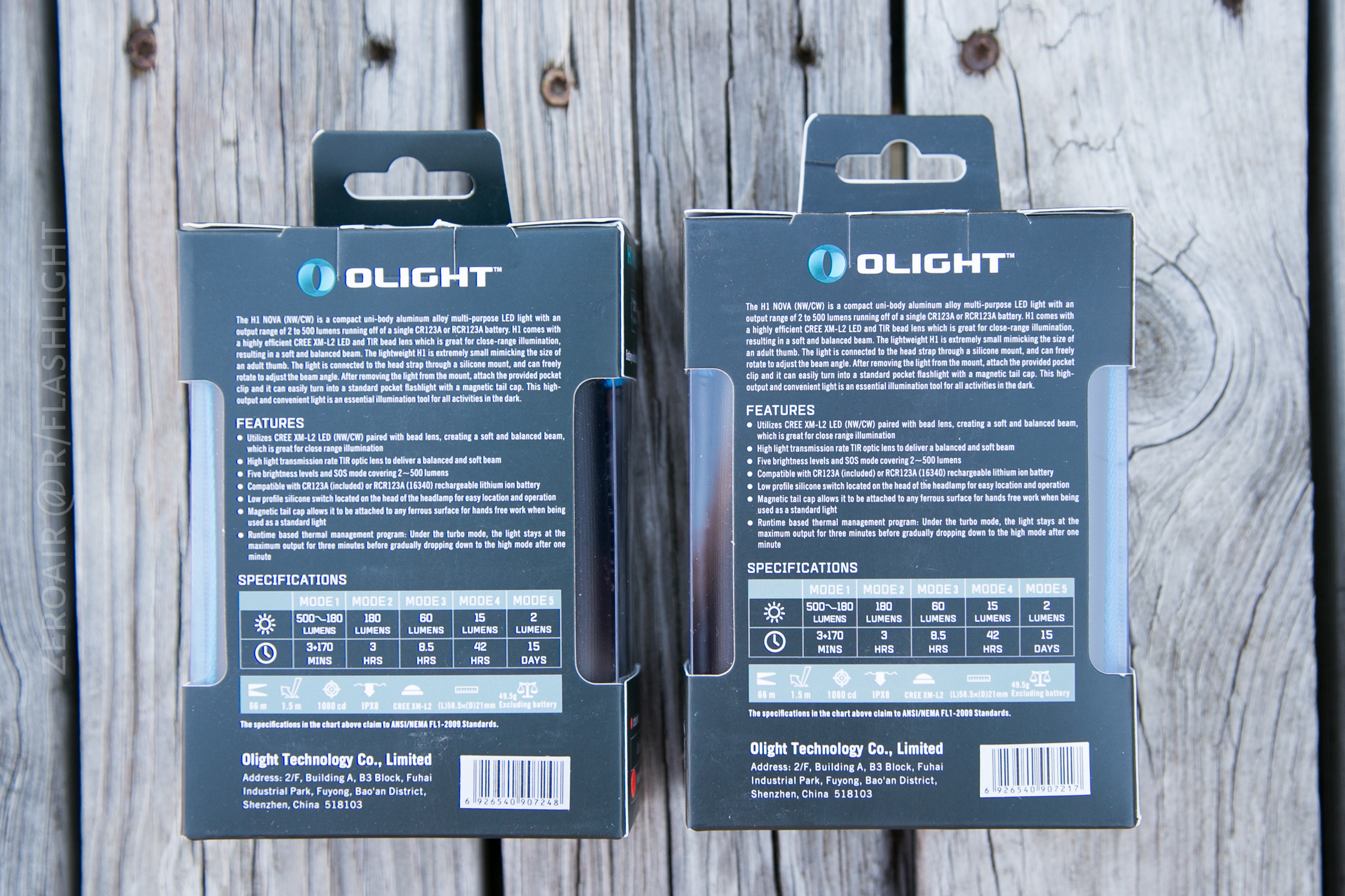 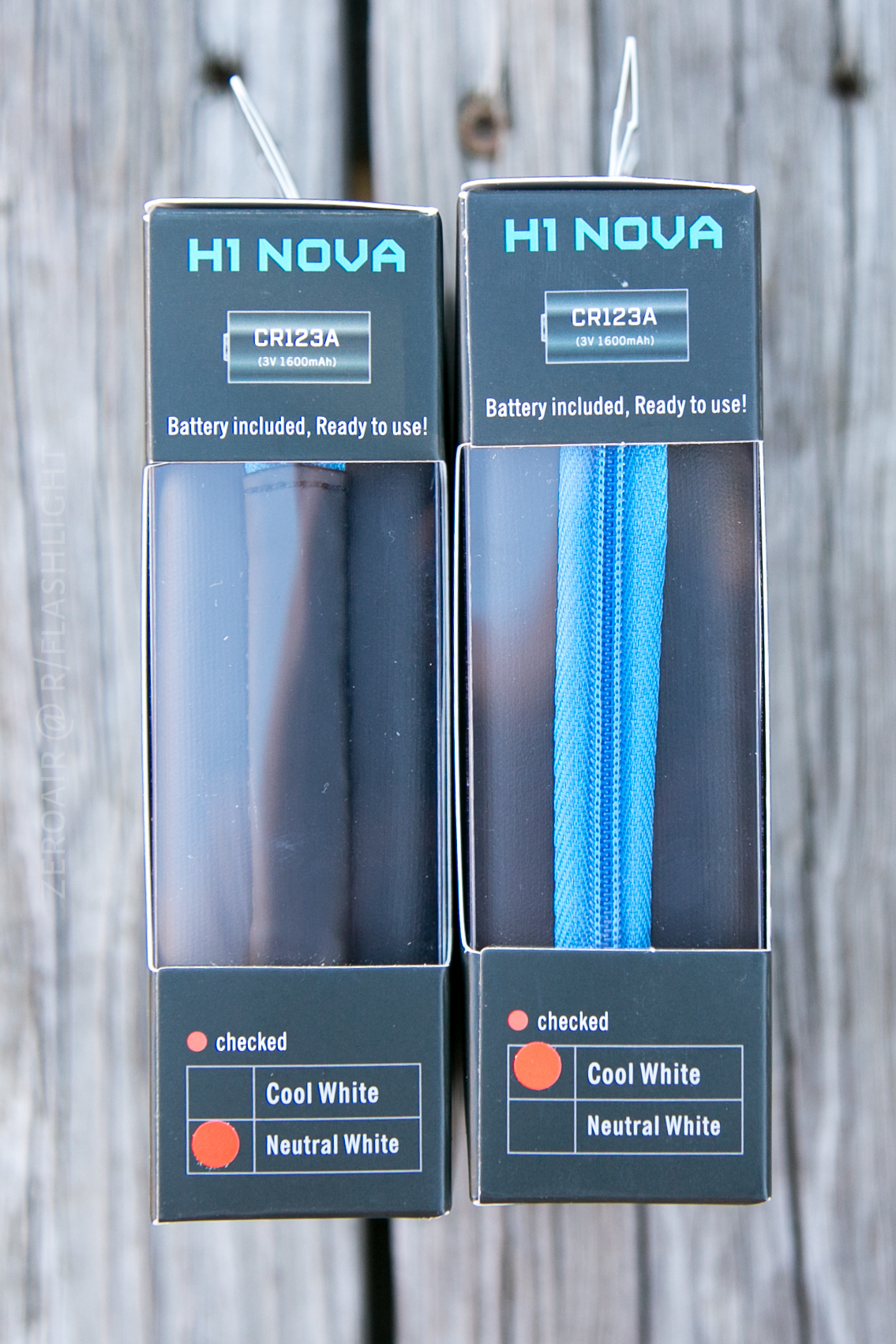 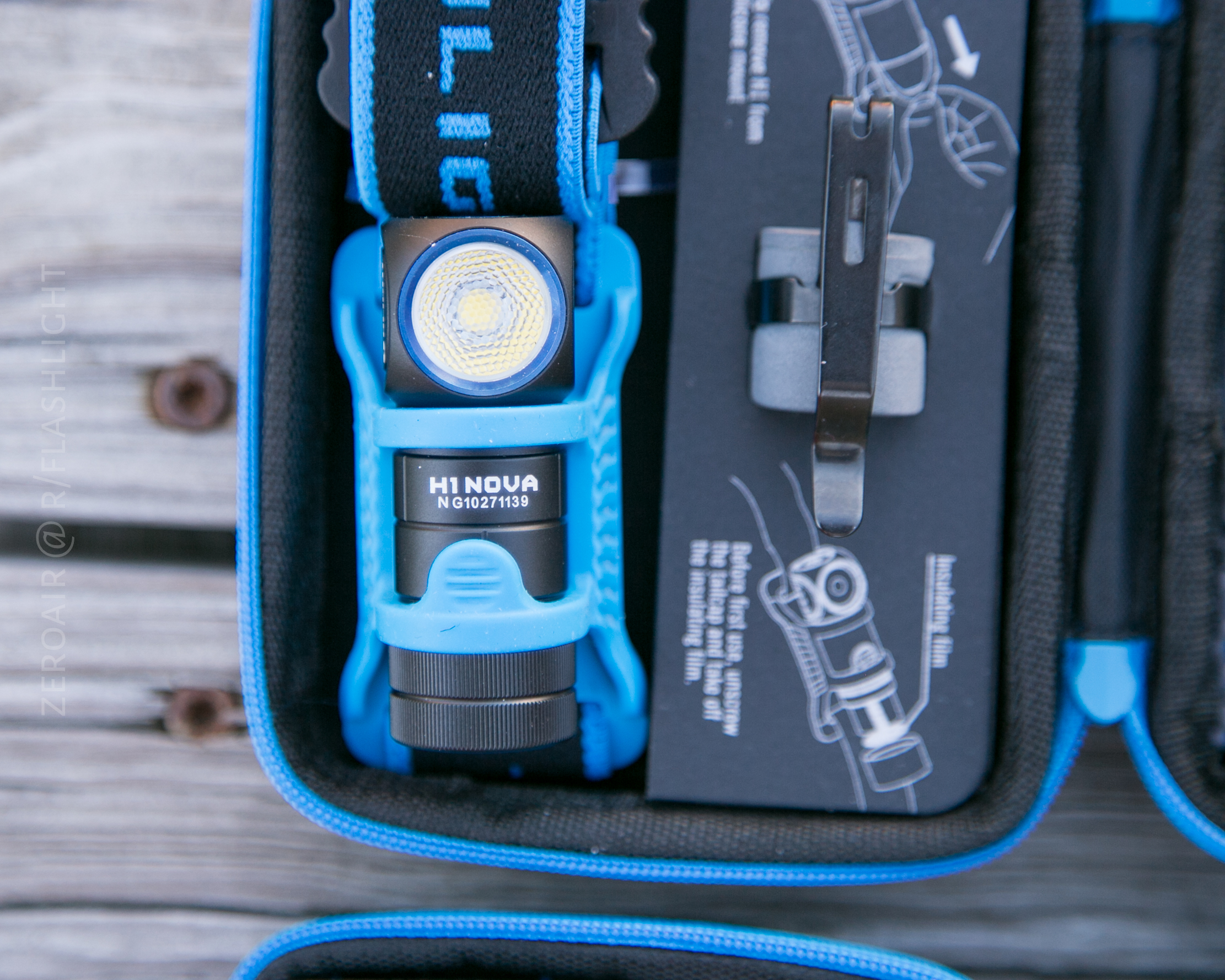 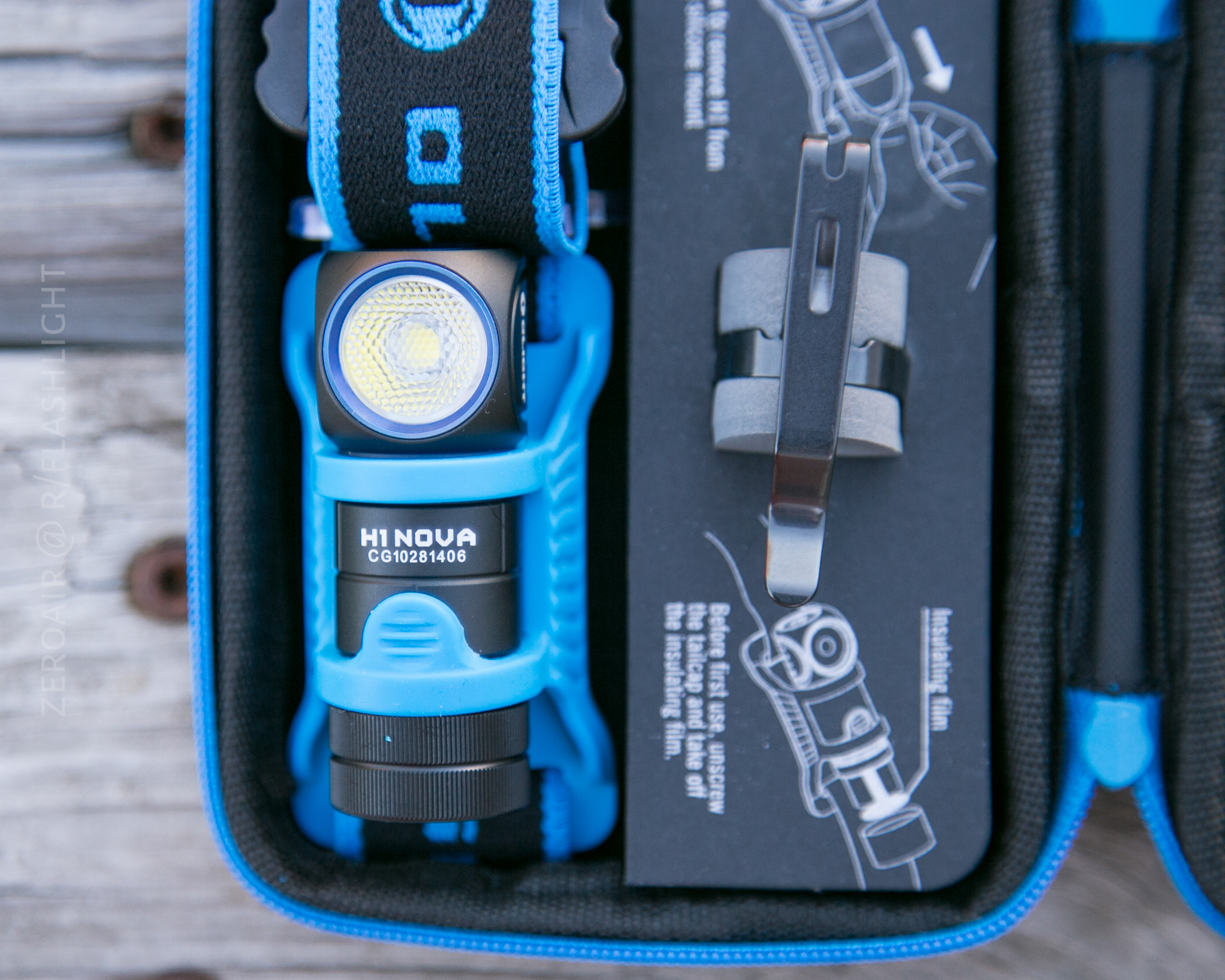 The manual is typical Olight. Fortunately this isn’t the overly long/complicated version. It’s just got a few languages (not 50 or whatever the long manuals have). The manual does the typical Olight good-job of describing the UI and features and warranty. 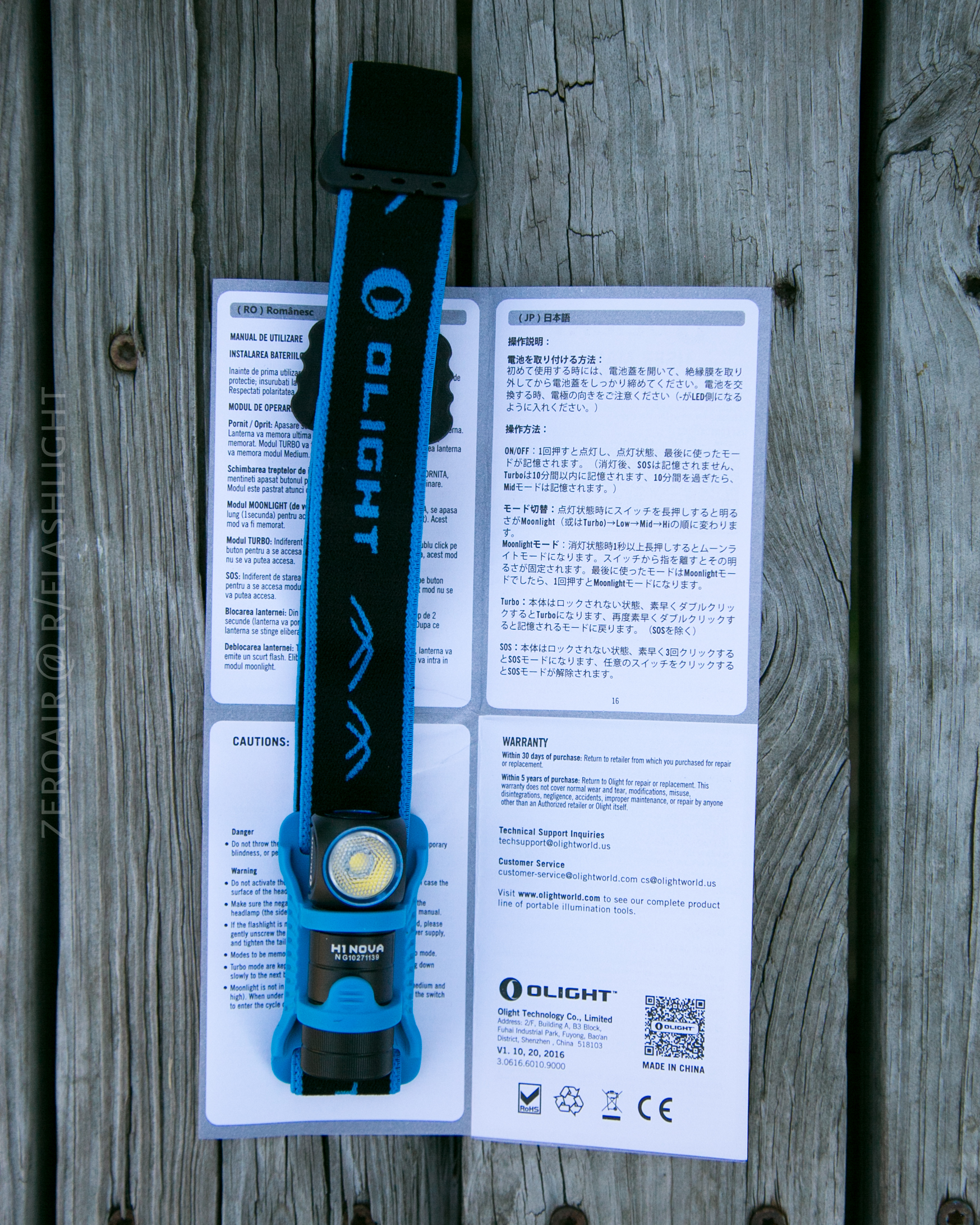 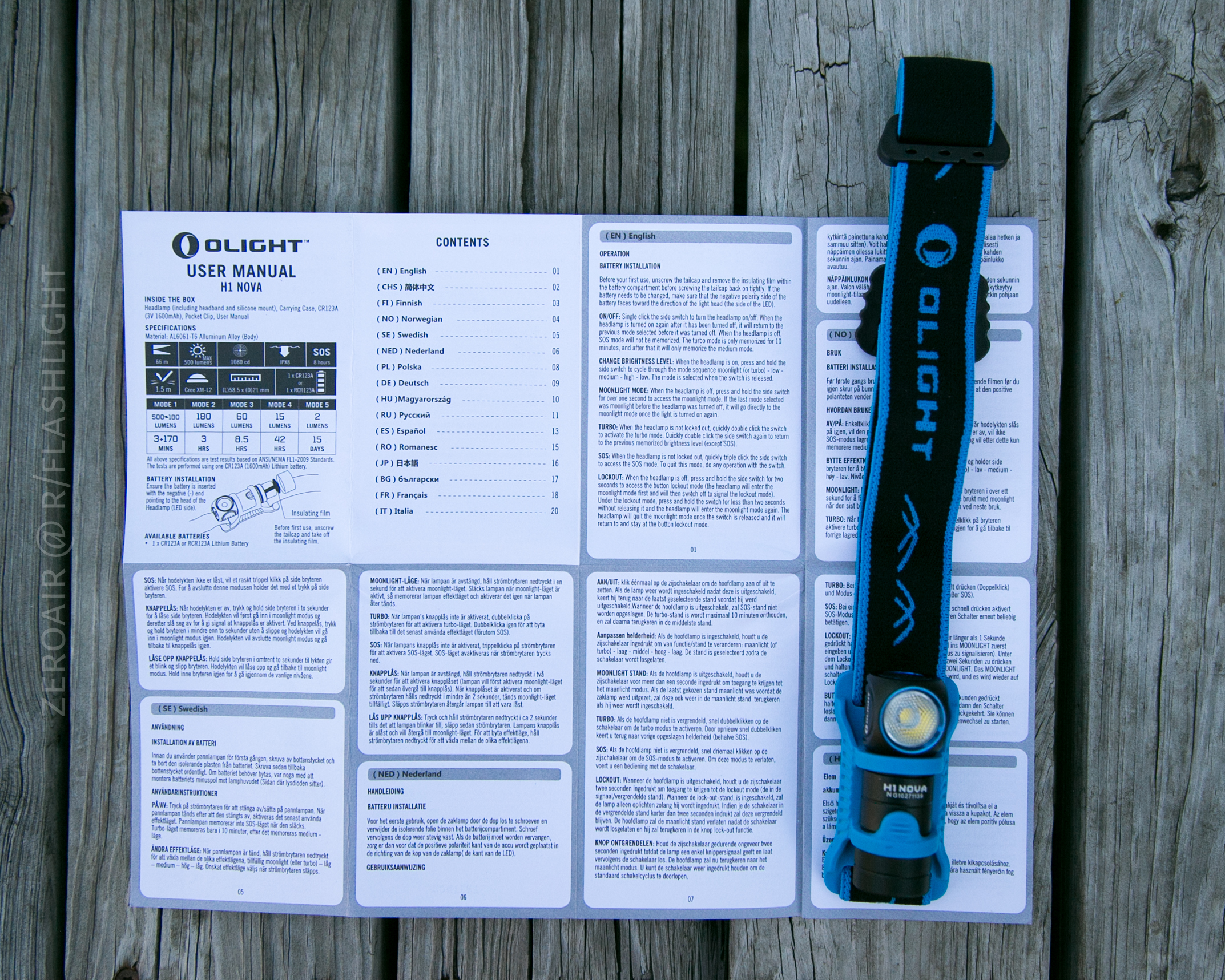 I have zero complaints about the build quality on these H1 headlamps. They’re very similar in quality to other small Olights. The major difference is that the button is on the head, and is nearly the size of the diameter of the light, and is also perfectly flat

(with just a power symbol showing). 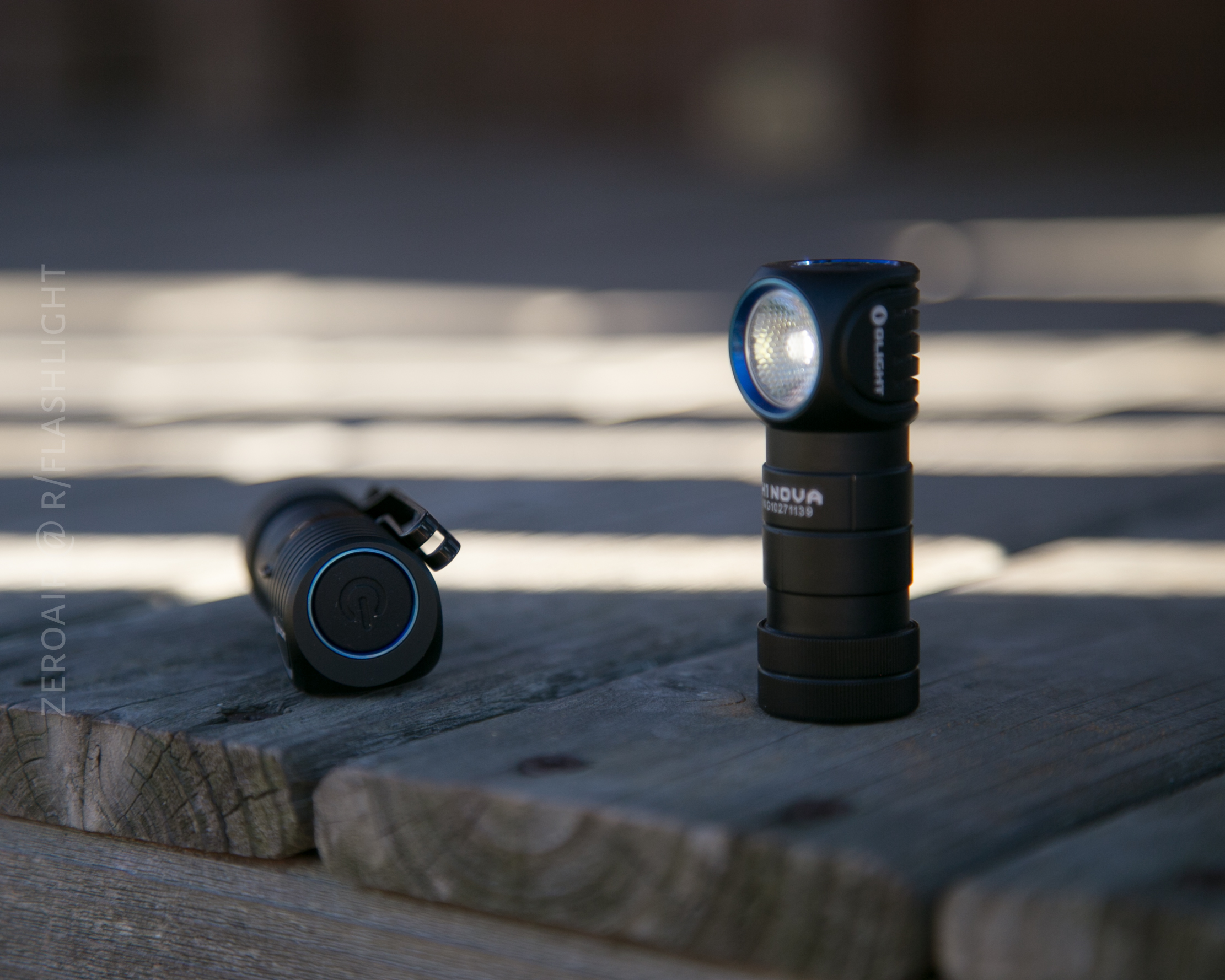 That’s great- a large contact patch for easy use. Another difference from many other Olights (and all the Olights I have) is that the TIR that is over the Cree XM-L2 is dimpled. 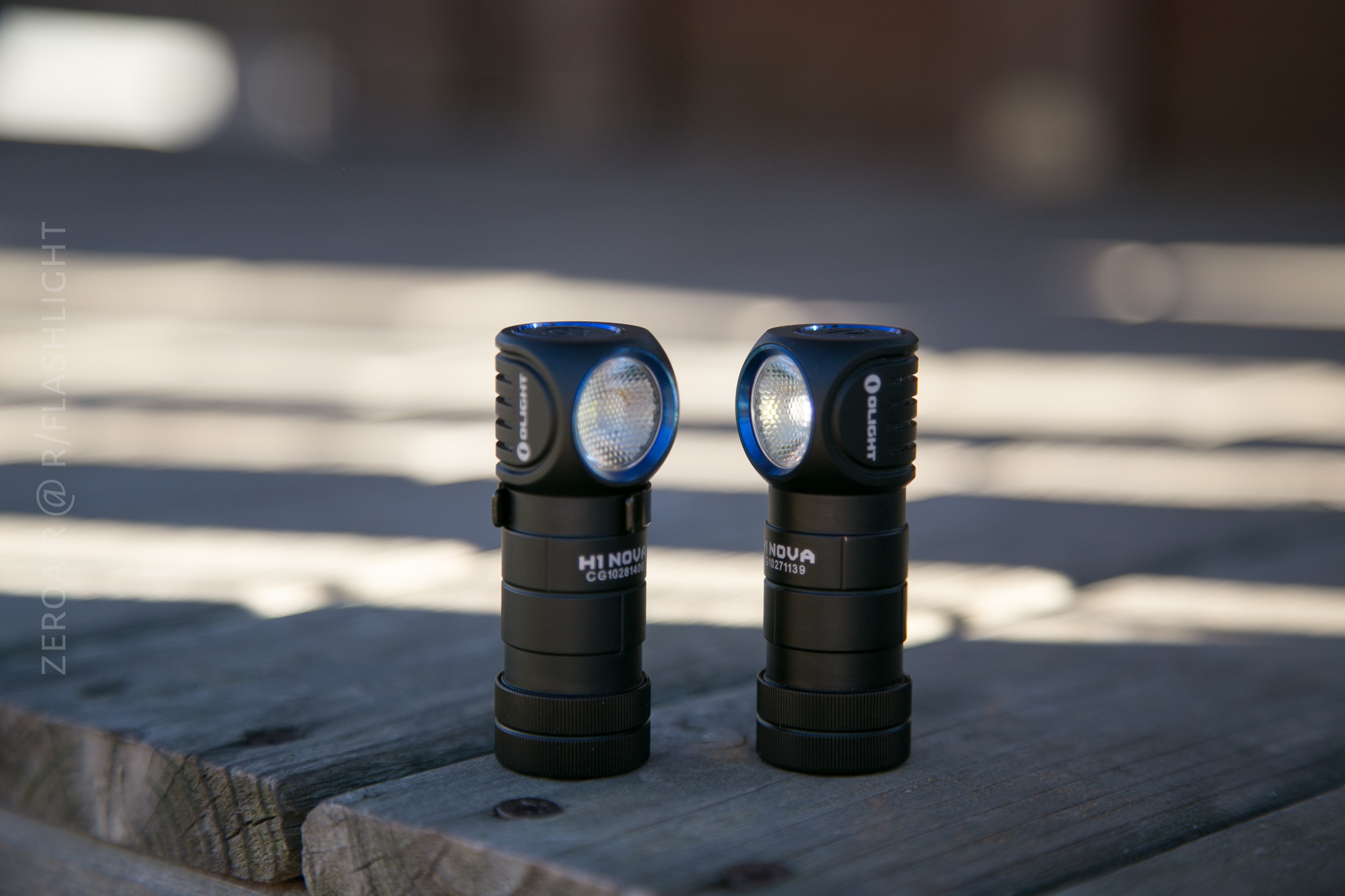 I presume this is done to further smooth the beam, but I have no complaints with general TIR beams anyway!

The threads are anodized and square cut, and there’s a magnet on the tail cap! 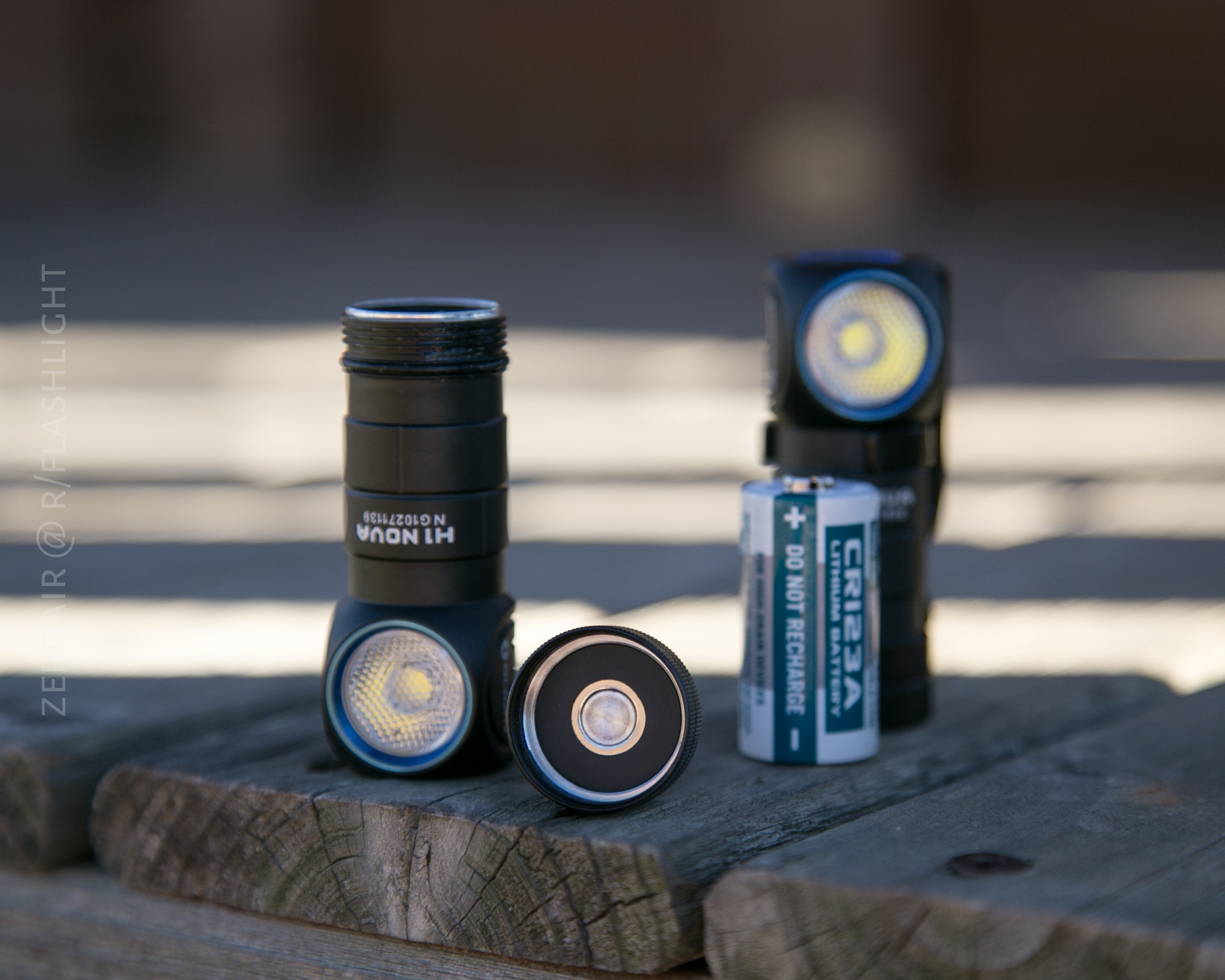 It might be hard to tell it from that picture, but the tailcap magnet is actually the positive terminal connection to the battery. That’s a very well thought out design with no wasted space. There’s no spring on the tail end, just the magnet. Surrounding that magnet is the foam donut that should prevent reverse polarity accidents. There is a nice spring on the head end. 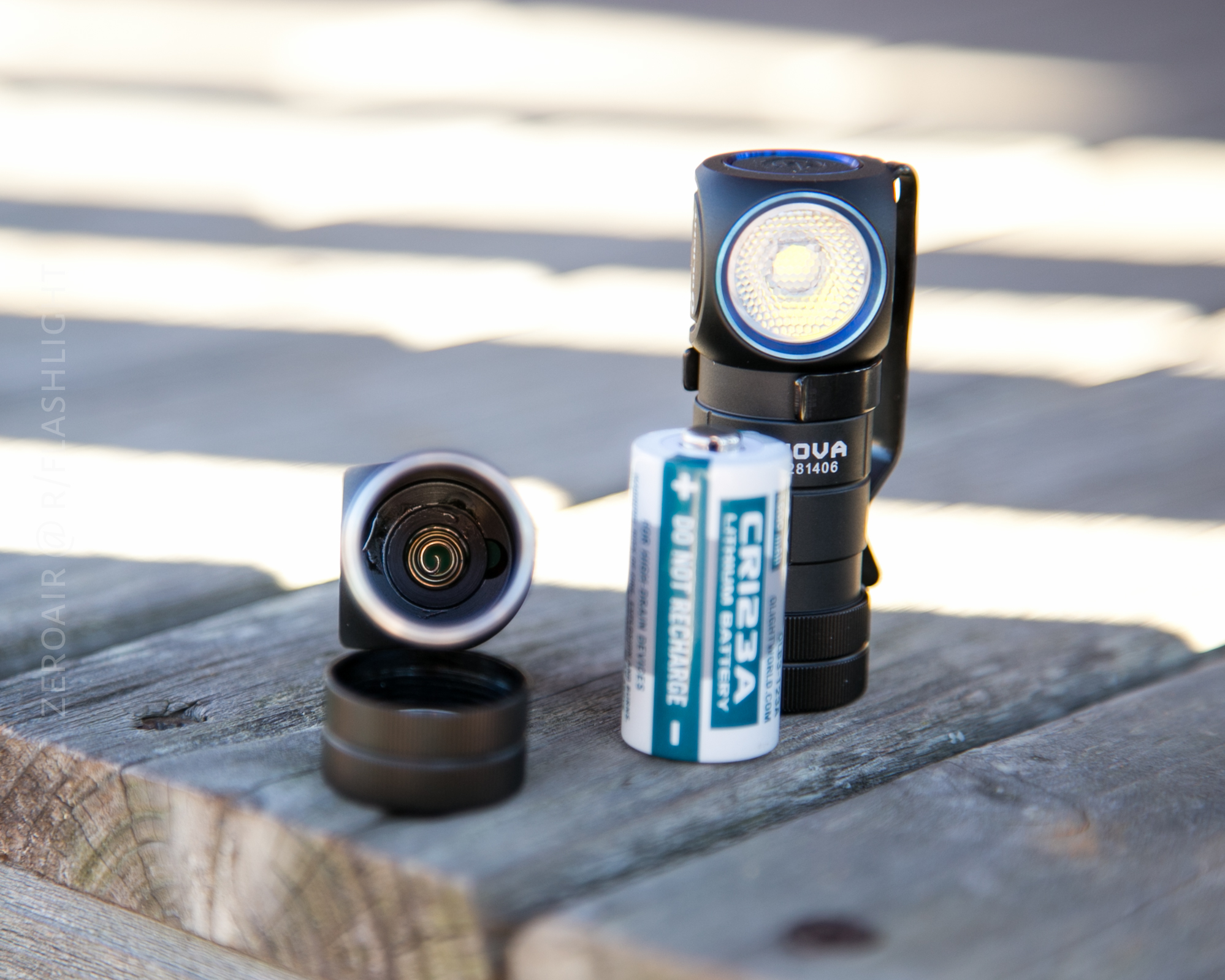 The body does have the model info and serial number

The “H1 Nova” is generic for the light, but every CW will have the next line start with “C”, and every NW will have that line start with “N”. Other than looking at the serial number on the body of the light, I’m not sure of a way to tell them apart. (Unless your eye is keen enough to differentiate the tint, which it may very well be!) Side by side, the tint does seem noticeably different even at the emitter level.

The head does have some thick fins

(and Olight branding!), but honestly in my testing these lights never got all that hot anyway, peaking at 40C and then hovering around 35C for most of the runtime (on “Level 1”).

The headband is soft and comfortable, and the blue silicone 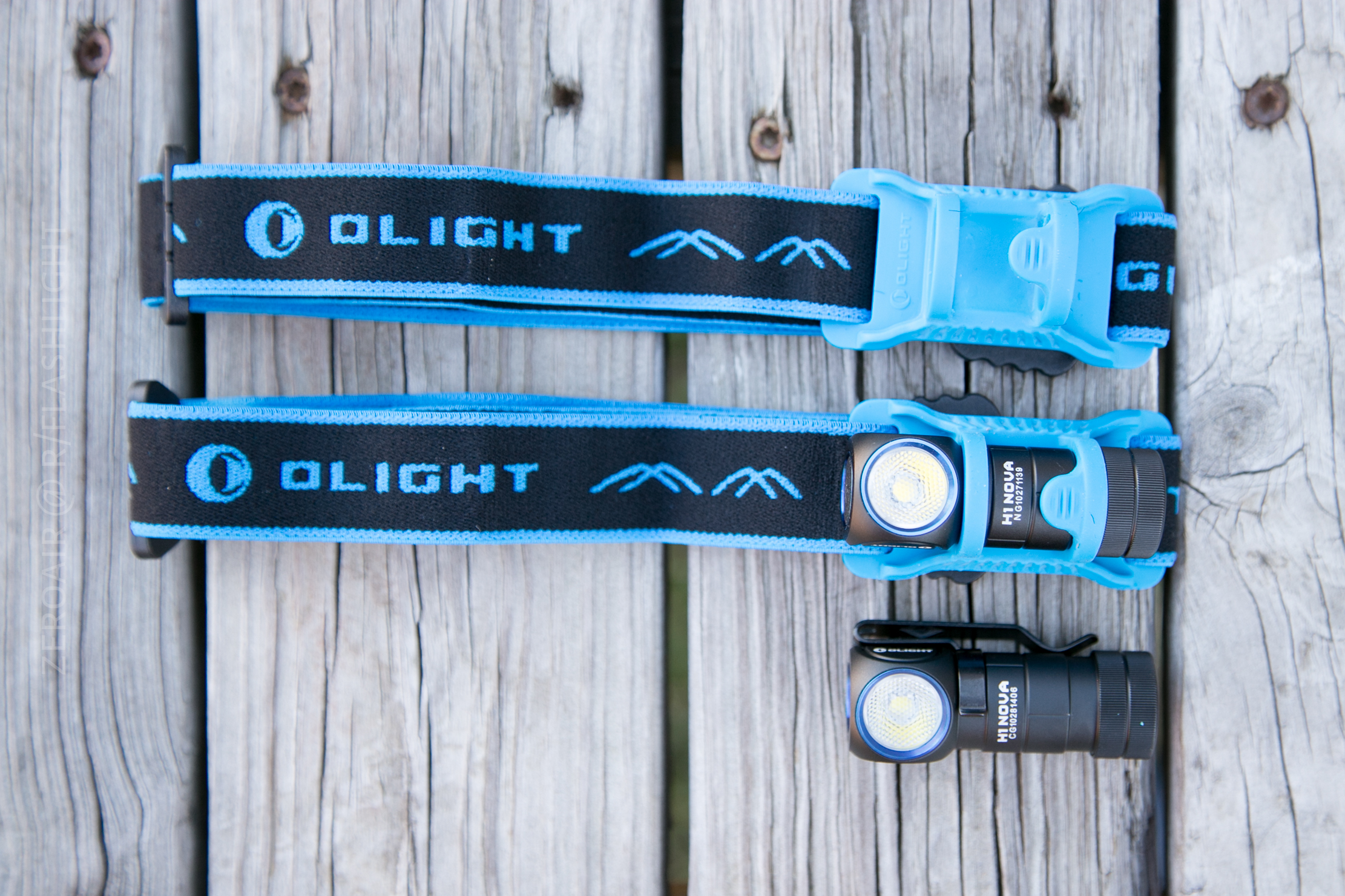 light holder holds the light snugly without making the H1 difficult to remove. The little pull tab helps with that of course. The silicone is also quite robust, so stretching on it to get the light in or out doesn’t seem detrimental.

There’s not much disassembly possibility here. The tailcap unscrews to replace the cell, of course (and there’s a nice battery direction indicator in there!) 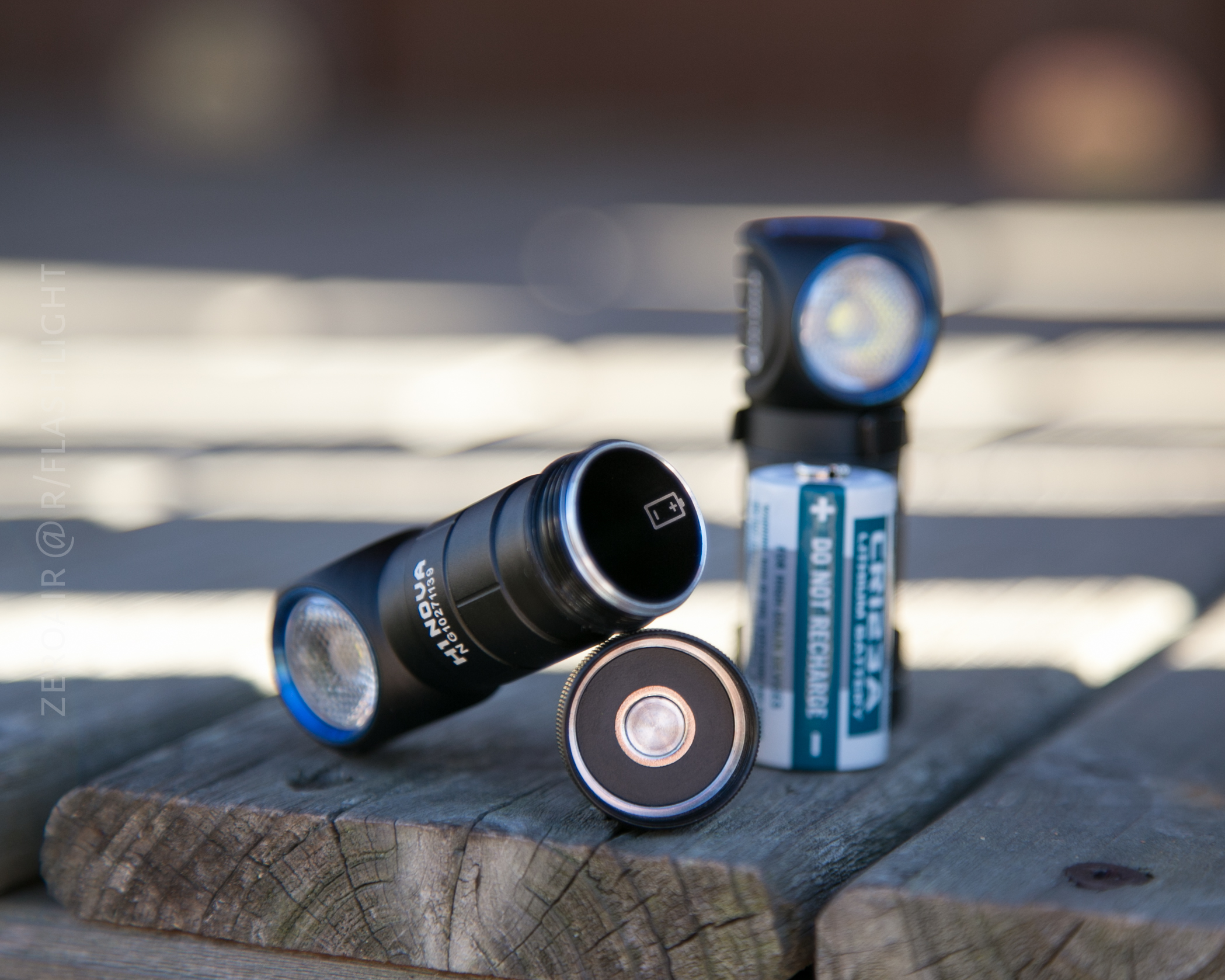 The bezel over the TIR is press fit, and sits flush with the light body. The bezel that holds in the button

is also recessed and flush with the body of the light. None of those are going to be easy to remove.

When I first got the H1, I said to a friend – “I can’t imagine a light using this cell to ever be any smaller than this H1”. He replied “well you haven’t seen a S Mini, then have you?” I hadn’t. Nonetheless, this H1 is incredibly small for it’s cell size. It should even fit comfortably in a coin pocket, much less a front pocket.

Here are a couple of comparison shots:

You can see it’s much smaller than the S1 (brushed titanium). 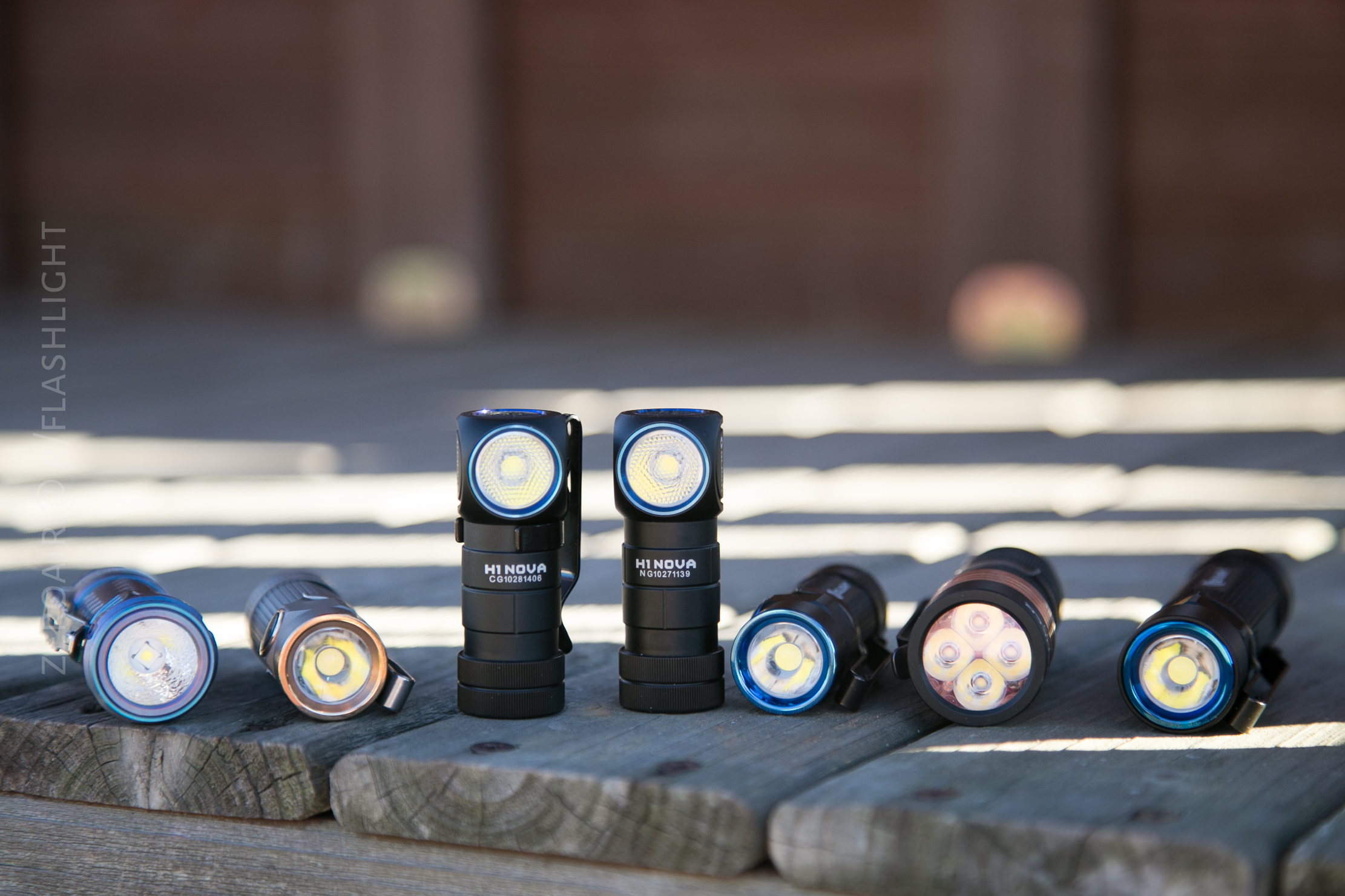 And the emitter’s dimples, compared to other TIR (and non TIR, too).

Of course this is a headlamp, so there’s a headstrap option, which includes a silicone light holder.

There’s also a pocket clip, which I’ve used extensively. The clip is a standard Olight clip, and while I don’t love this clip it does do its job well. The little dimple on the inside of the clip prevents me from getting all of this style clip very deep in my pocket. I wish that was gone. That said, I never had the light flip out of my pocket. The clip can go on the head or tail end.

And finally, the tiny magnet in the tailcap, which is plenty strong to hold this light in place.

The zipper-closure pocket case is fine for it’s use, though it seems a bit large. There’s a mesh pocket, and a compartment for the light+ headband. Though I can’t see myself actually using this case, it is well made and should serve that need fine. It would add a lot of weight to the light, so I can’t imagine this becoming a backpacking essential, for example.

This is essentially my ideal compliment of options. And this is why angle lights are generally my favorite lights.

The H1 Nova is powered by a single 16340 sized cell. Olight provides a primary lithium CR123A. You’ll have to remove the pull tab

before first use. There is no recharging option, though rechargeable cells (RCR123A/16340) cells do work.

It should be noted that the cell in this case, is placed in the opposite-from-“normal” direction. So the negative terminal of the cell goes on the emitter end of the light.

The light does seem to have low voltage protection, and maybe even set very high: CW terminal voltage was 3.30V.

There’s one large black silicone button on the head end of this little headlamp. That’s a departure in a number of ways. 1, it’s big (compared to the light itself) and it’s flat (most are domed). Pressing the button is easy, but I haven’t had a single accidental activation the whole time I’ve carried it. The UI is very familiar, however.

* Turbo memorized for 10 minutes, and then kicks down to *medium*. (Moon can be memorized, too.)

Both NW and CW versions have a Cree XM-L2. They both have a dimpled TIR. The beams are quite different though – the NW is great and… neutral. But the CW is quite cool. I’d recommend the NW of course. The runtimes I have here are actually comparable so it seems that the CW gets a little more output, but it’s probably not truly perceptible. And the CW seems to get a minute two more of runttime, but that’s probably not even a statistically significant difference.

There are many other 16340 lights, even many with XM-L2 emitters. Many of those are Olights 🙂 – so there’s no point in mentioning the lights that this one replaces. The next closest competitor would probably be the Armytek Tiara C1 Pro v2, which is even available in a high CRI limited edition. Picking between these two will probably end up being just a matter of personal preference, but it does look like the H1 would be better suited to pocket carry than the Tiara C1 Pro v2. It looks to have a more specific design as a headlamp. 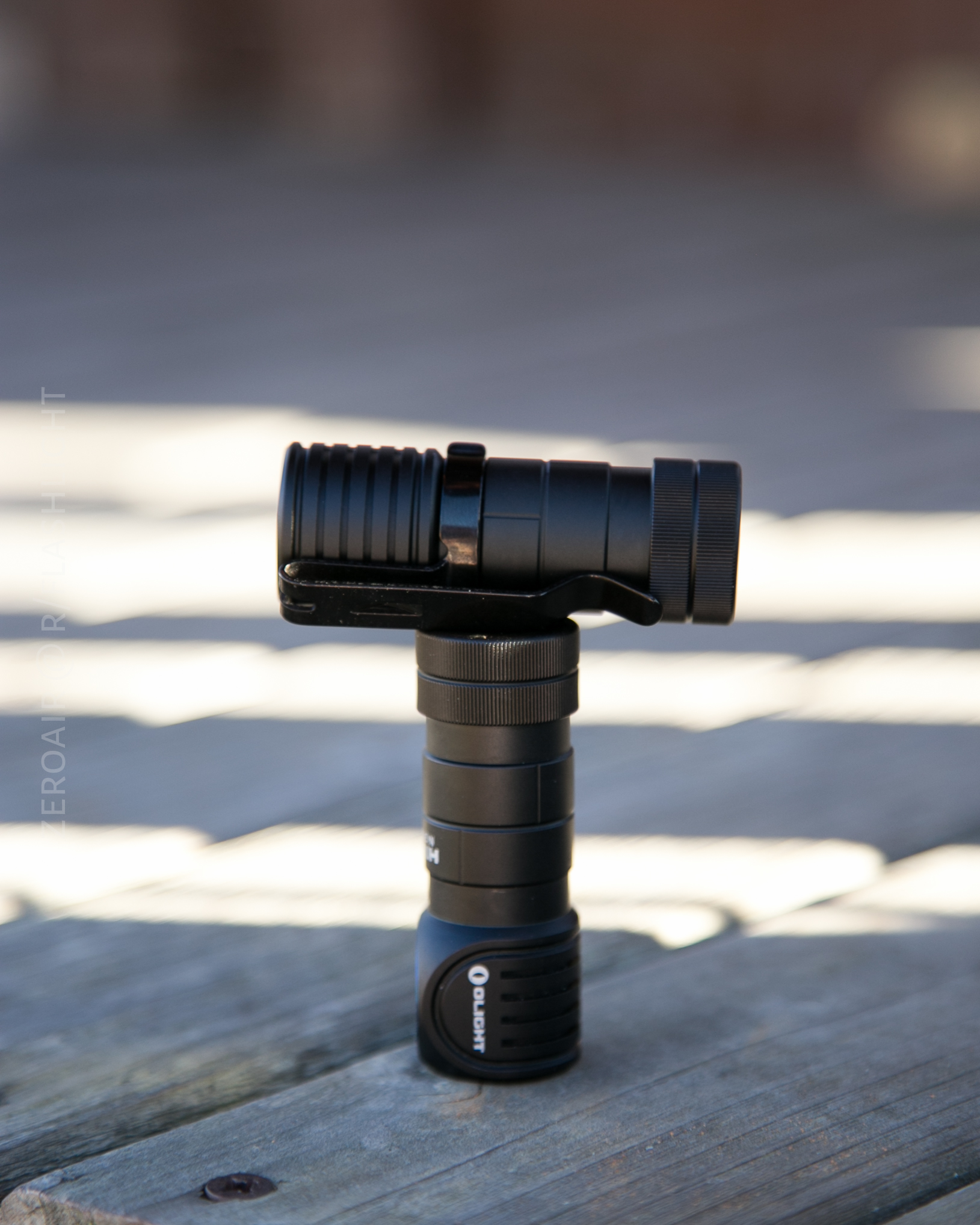 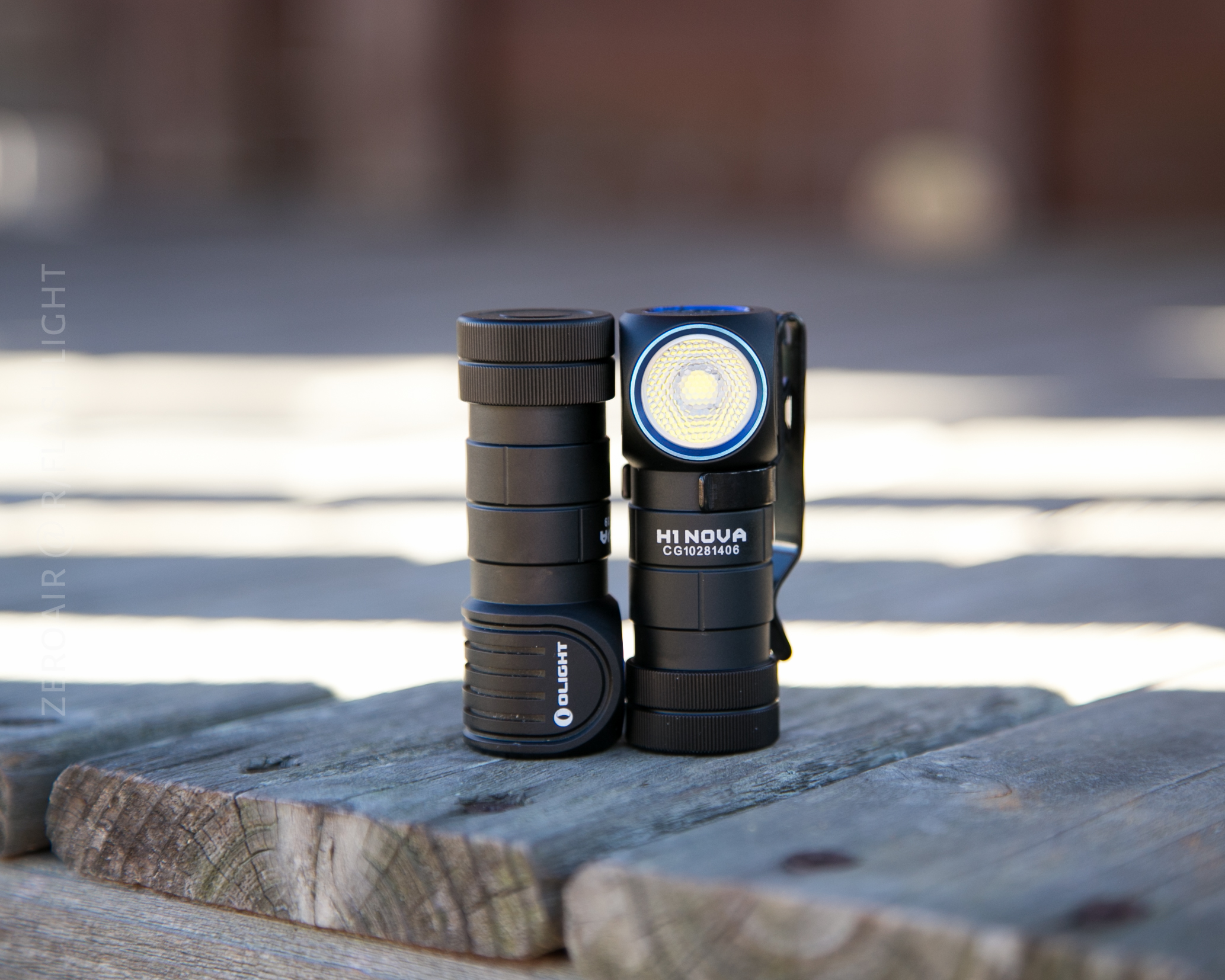 I really love this little light. As of this moment there’s even a great price at Going Gear, which brings the price down to in the low $40s. Very worth the cost in my opinion.