Here’s my second Eagtac light, the SX30C2.  This is a throwier version of the Eactac I just reviewed, the TX30C2.  The specs and such are otherwise pretty much the same!  As a result, much of the review will be carry over, too.

There are two packages of this light.  One is just the light package (which is what I have here- you can see what that includes below).  The other is the “kit” package, which includes a few extras like a strike bezel, holster, extension tube for 2×18650, and diffuser.

I got this one from KillzoneFlashlights.com, and that’s where I’d recommend you get it.  They’re an authorized dealer for EagTac.  The going price is $99.

I like a thrower in Nichia format.  I don’t think there are just many of those, and I’m very glad to have access to a production light with this as an option!  Otherwise, build quality and the like, I’m very happy with the SX30C2!

EagTac uses a cardboard box with a bunch of printing, and distinctive coloring.  You’ll guess that I like this package for it’s recyclability.  It’s also a “standard” box – the same box used with other lights, differentiated by a sticker.  See the sticker below, which covers the specs of the light.  Unfortunately some of the sticker is model generic, so for example the “Custom Nichia 219c CRI92 LED” sticker would override the “2000 LED Lumen” rating.

The light is held in place by more cardboard.  Again, I like this better than foam, because of the lower environmental impact.

Here are some shots of the manual.  It’s all in English, and a two sided fold out paper.  The manual actually services all the lights in this build series (TX30C2 and SX30C2.)

The manual, being that it includes more than just this light, and that there are kits available, covers some options that you might not have.  Like an extension tube, and a diffuser cover.

This is a nicely build light, with the same unusual features of the TX30C2.  In particular I like the tailcap feature wise, and everything about the light is high quality.

You can just glance at this light and know that it seems different.  Like it’s evolved from a much earlier branch than most other flashlights today.  That’s a good thing – you can get a few options in this light that you can’t get elsewhere!

One of the main differences is in the tailcap.  There’s a retaining ring, which is a lanyard attachment point.  The different thing about that is how it allows you to remove the tailcap.  Since this bit of tailcap rotates freely, it’s possible to unscrew the tailcap without really releasing the grip from the tailcap.  That might seem minor, but it’s really a nice thing.

The head is also held on in an unusual way.  There’s a set screw, seen below, which holds the head on.  I did not remove this screw, (but may; I’m interested what’s in there exactly).  But this set screw is very different – I can’t think of one other light with a set screw holding the head on this way.  (Not that it’s a better or worse way, but it proves that the engineering is solving problems in a way others aren’t, which sometimes leads to great innovation!)

The light is quite printed, including the model on the head.  The model name being on the head is sensible, since the body is shared by other models (one of which I’ll be reviewing later this week, or early next!).

As you can see there are fins on the head but not not extremely deep.  The SX30C2 isn’t driven very hard though, so there’s no extreme heat to deal with.

The tailcap has a spring.  The head end has a spring too, but it terminates in a button (so it’s a spring, even though it looks buttony below).  The tailcap spring isn’t quite as stiff as I’d like, but with both ends having springs, this isn’t a big issue.  It’s hard to see on that positive connection, but the brass button has a plastic ring around it.  Looks like that’d be a physical reverse polarity protection, but it doesn’t seem to be; flat top cells work fine.  (The manual does say “protruded top required” which would indicate that they do want us to use button tops.)

The tailcap, seen below, has some very useful knurling.  Like I said above, the little lanyard connection is useful – it spins freely.  What I’ve found myself doing is gripping that, and squeezing down on the knurling to twist.  Then keep the grip on the ring, but loosen the grip on the knurling… it’s a very smooth action.

Below, the TX30C2 (right) is seen with the SX30C2.  Note how the bodies are the same, with the heads being the only difference.  It’s not possible to purchase different heads to use with the same body.  The heads don’t detach that way.

I don’t know who makes what flashlight, but this similar cutout in the side is too specific to be coincidence!!

The reason I trust the pocket clip for lanyard attachment is that there’s a ring which screws down over the pocket clip, preventing it from sliding off.  That’s a very clever solution to clip management, while still allowing for the clip to be removed.  To remove the clip, take off the tailcap.  Removing the o-ring is not necessary, but will help.  Then unscrew the tiny clip-retention ring (the reeded part – that looks like the side of a quarter coin).  This might not remove all they way, but it’ll unscrew enough to allow the friction clip to be removed.  Then screw it back down, screw the tailcap on, and you have a clipless SX30C2.  (Also note that this means it removes seamlessly!)

The lanyard connects through the dedicated plastic ring on the tailcap (which I’ve already gushed about, above).  The lanyard has a little metal spring-clip, and attaches very securely.  Unfortunately the lanyard that came with this light seems to have been cut just a bit incorrectly, and isn’t functional.

It’s also possible to connect the lanyard on the pocket clip.  The clip is thick and stiff, and while it is a friction clip, I trust this connection.

Here’s the runtime on MAX (which is what Eagtac calls Turbo).  I didn’t observe any LVP, and the output once it settled, was nice and flat.  Unfortunately this output is a bit below specification.

The output on High is much more level, until the cell reaches a certain voltage, then output begins to drop dramatically.

There is no indication from the switch when the voltage is low.  There is an indication of cell voltage when the light is turned on.  A few seconds after turn on, the switch will blink a number of times.  Those blinks indicate the following:

During a runtime, I might say “this light has no LVP” but in reality, at any point during use, the light could be shut off and turned back on to see what he approximate cell voltage is.  Also the output would be a very good indicator.

There are two switches on this series of lights (which is more than just the two I have, the TX30C2 and SX30C2). Both are e-switches. One (the left one, when holding the light) is black. The right switch is white/clear, and has a blue indicating LED under. The two switches are useful, since they offer shortcuts that are more difficult (at least, more difficult to remember) in single switch lights.

The switches are different sized, but that’s not noticeable in daily use.

Here’s another special thing about this light!  It’s available in a stock configuration with a Nichia emitter.  This is a High CRI 219c model.  That’s not unheard of in production lights, but it’s a little unusual in this type (thrower).  And that’s a good thing – warmer lights make great thowers!

The reflector is deep and smooth, making a nice tight hotspot, and little (but specific) spill. 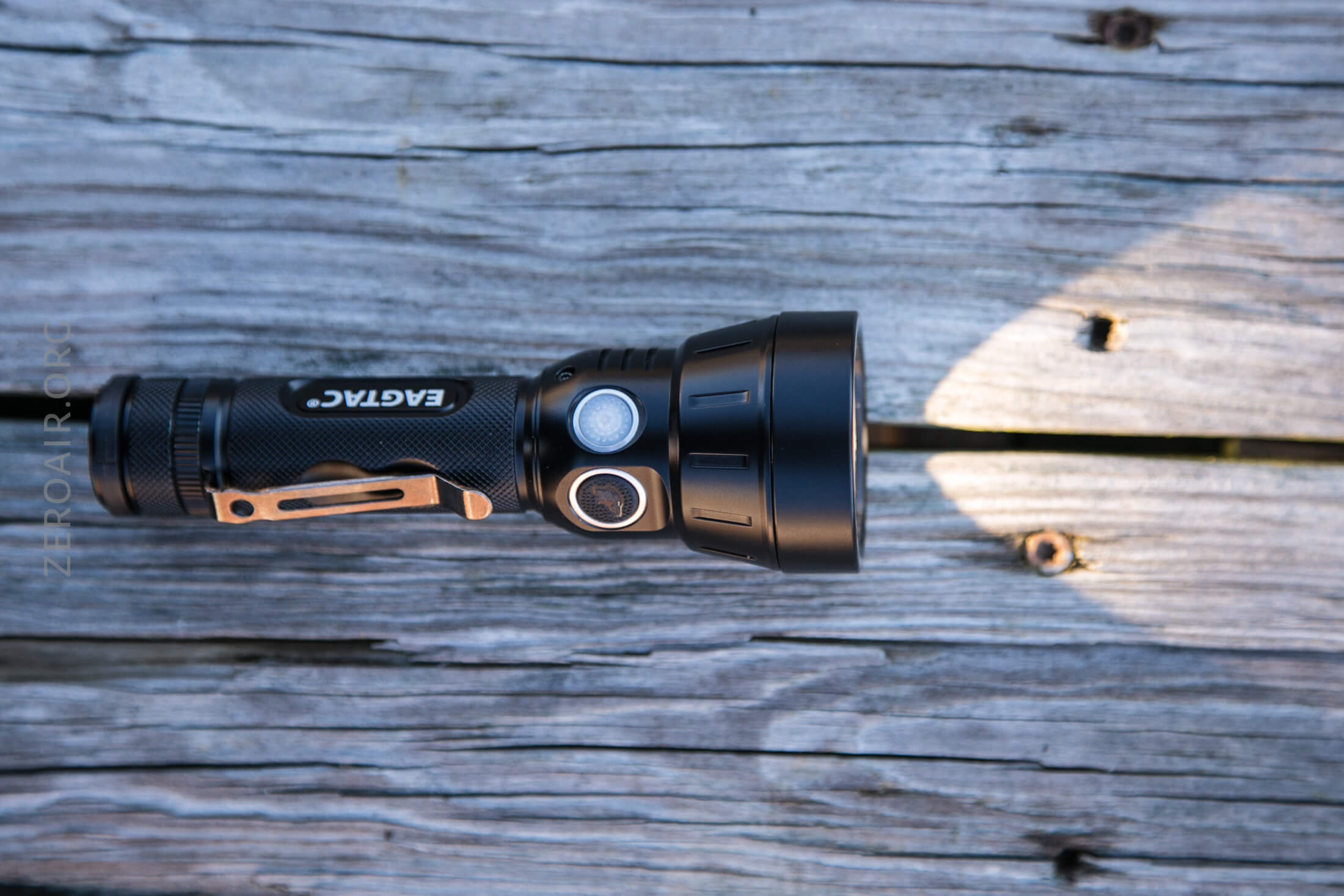 Here’s a link to a relevantly filtered page on parametrek.com.  I use that site a lot!  There aren’t other lights like this one.  There are a few Nichia lights there with similar throw, but one achieves that with non-Nichia emitters also on the light.  The other two aren’t even in this class, and are also made by EagTac!

I highly recommend this light because of the emitter choice, but for other special features mentioned above.

Next week I have a light by Olight, a right angle light that isn’t really a headlamp, and maybe a Fun Fund Friday!  I have a number of cell reviews too, so look for those on Tuesday and Thursday.