Grant Spitz announced the aluminum version of the Deadwood Huckleberry Topo Flashlight with the option of a 219b single. Read on!

Here’s a link to the Deadwood Huckleberry Topo Flashlight product page.  (That wasn’t available when I purchased – I joined through the Facebook group.)

There are many versions of the Huckleberry.  Too many for me to reliably cover them all…  First off, the metals.  Available now (for preorder anyway) is aluminum (seen here) and titanium.  These have also been offered in at least copper, brass, bronze, zirconium, and possibly some mixed metals (damasteel, timascus, etc).  And probably more.  Grant seems willing to work with many metals.

There are also finishes available.  Bare metal or cerakoted (seen here).  There is all manner of cerakote options.

Also, there are some options for how the body looks – some have flutes, some have a wrap of “barb wire” or the like, some have nothing (like mine).  There are even versions onto which have been laser-etched… pretty much anything.  More than any other maker I could name offhand, Deadwood Custom Works has finish options.

This exact light was $300.  This is essentially the base price for this light, and options go up in price from there.

Probably my most carried light right now (save the Eagtac D25AAA, which I always have.)  I love that it’s a single, and love the output.  H17f let me dial in what I needed, but that could be confusing for someone who doesn’t have a bench power on hand, so be aware of that.  But I absolutely love the light.  I like that it’s aluminum, and I love the cerakote finish.

^ Measurement disclaimer:  I am an amateur flashlight reviewer.  I don’t have $10,000 or even $1,000 worth of testing equipment.  I test output and such in PVC tubes!!  Please consider claims within 10% of what I measure to be perfectly reasonable (accurate, even).
^ The very customizable H17f driver kind of thwarts attempts at extreme measurements here.  I dialed the output back right out of the box, to prevent frying the Nichia 219b, so I can’t say what the measurements are out of the box.  But you shouldn’t push FET level currents through that emitter, so while you should take these measurements as indicative of the performance of the light, they might not be exactly what you’ll experience.  It all depends on programming.

See the card, above.  It is metal and includes the full light info and is great.  Unfortunately, my light shipped with the wrong one (seen below), but Grant made it right by sending the proper card.  This sort of shows how uncommon the single version was – many more Dragon driver lights were sold.

The light ships in a cardboard box.  Inside that box is the light, which is contained safely in some pipe insulation.  This is standard-level packaging and keeps the light safe.  It’s not “keepsake-level” packaging, though.

There is no manual.

The first few times I saw the Huckleberry, I was not too excited.  Only when the cerakoted version was released did I get interested.  And I got even luckier… Grant was willing to replace the standard gray topo line with an orange one for me, which just pushed me further over the edge to buy this one.  I am very pleased with the look and happy that as of now this is one of a kind.  The body of the Huckleberry is still fairly plain, but if you need features, there are other finishes available.

The build quality is very good.  Also, and again, it’s an aluminum light.  That might be common in the production world, but for a maker like this, it’s unusual.  I love the weight of it.

The switch is somewhat recessed, which allows easy tailstanding.  But not so much that it’s hard to actuate.

The pocket clip hits just right on the collar.  It could have a bigger mouth, but it works well.

Now here’s one massive failing for my tastes on a light like this…  In the photo above, the topo lines that cross the head to tail are matched up perfectly.  But if I tighten the head fully as seen below, the lines do not, in fact, match.  This should be indexed.  You’ll note that the gap between the two parts looks the same whether it’s matched or not, so of course, functionally there’s no difference.

The threads here are not all that long and are unanodized aluminum threads.

The head end has a brass button, and the tail has a nice thick spring.

The threads could be cleaner, but I’ve shot these photos after a bit of use.  I’m not sure if this is an issue with the lube used, or what, but I’m surprised the threads have blackened as they have.

The pill unscrews easily and could be modified if desired.  The pill in the aluminum light is aluminum, which again, helps keep the weight down.  Note below a nice view of the glow gasket – that’s not even mentioned in the product literature, so it’s a nice (free) touch.  Non-aluminum versions have a copper pill.

The reflector is also aluminum. 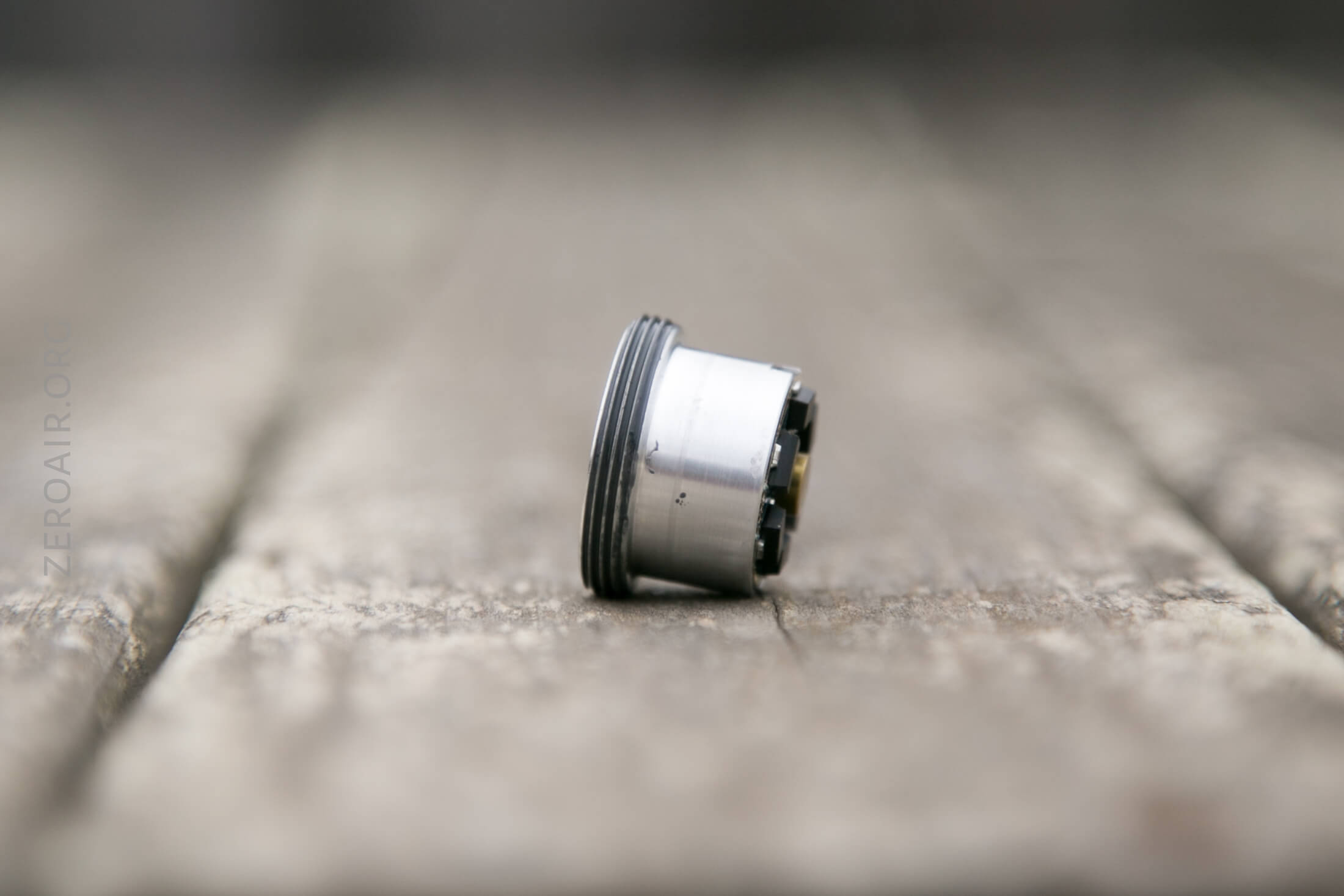 The driver sticks out of the head just a bit when the head is off.

No official measurements are given.  So here are mine.

For weight reference, the anodized BOSS weighs 56g.  So this light, while longer, weighs less.

Included with the Huckleberry is a pocket clip.  I believe this is titanium, but that’s not specified.  It could also possibly be stainless, but based on the weight I doubt it.  The Huckleberry has the standard hole spacing for other popular aftermarket clips.  Yes in the pics below the clip is a touch crooked, but I’ve remedied that.

The clip meets the body in just the right place.  And again, I could stand for this mouth to curl out just a little more or be a little longer, for easier grabbing of pockets.  Also, the Deadwood text and gun theme aren’t really my jam, but I don’t dislike them.  I’m not sure how they are applied to the clip. I believe the clip has been coated in some way, and the logo and name have been lasered onto it.

Since these threads are unanodized, once the body and head are in contact, and the cell touches that button, the light will operate.  So it’ll operate long before the head is screwed all the way down.

Now as I said above in The Big Table, these runtimes are going to be a little bit… useless.  I’m including them because a review doesn’t seem complete without them, but…  I reprogrammed my light almost immediately when I received it.  The H17F driver is a FET driver on the highest mode, and the standard programming is not documented (by Grant, or anyone else who uses H17F drivers).  Since I didn’t know what the top mode was, it was necessary to reprogram it so that I didn’t kill the Nichia 219b.  Anything over maybe 3A would be very bad for the 219b, and many 18350 cells are certainly able to deliver more than 3A.  Blah blah… so just tell us what mode you programmed to and we’ll all be able to compare.  Well, it’s still not that easy.  I think I put the light in around mode 22 or 23 (there should be 24, with mode 24 being the FET).  But some of the lowest modes don’t even register as output, and when I’m counting the modes I see 21 or 22.  That brings me to a thing I don’t like about the H17F – I wish I could easily set certain groups – for example, the very highest should be some kind of shortcut when programming, or at least a longer pause.  Or a double blink, or pretty much anything to let me know it’s at the top.  But there isn’t this type of notification.  During programming, the light ramps up then ramps down.  Count or guess, you get what you get.

So the below modes are what they are.  I believe the “Medium” is the same as it was from stock, so that should be reliably comparable.  I believe the “Highest” was around 2A when in use, too.  But just enjoy them, without taking too much out of them.

What is surprising on these charts is just how low the output is.  Even when I pushed the light hard, I’m still only seeing around 350 lumens.  I just wouldn’t have guessed it.  I bet you’d feel the same if you had the light in your hand, too.  A reflector puts so many of those relatively few lumens in such a useful place, that the lower output hasn’t ever bothered me once.

PWM is a known entity on the H17f driver, and it’s a complete nonissue. It’s shown here as a matter of course.  I’m recycling these from some other test, because… it’s still an H17f, so the PWM will be the same.

For reference, here’s a baseline shot, with all the room lights off and almost nothing hitting the sensor.

The switch is a forward clicky mechanical switch.  This means it’s possible to use the switch as a momentary switch.  It’s big, clicky, and knurled.  The switch itself is an actual McClicky.

I will note that the light will tailstand easily – the bezel around the switch is tall enough to allow to sit fully flush on a surface. 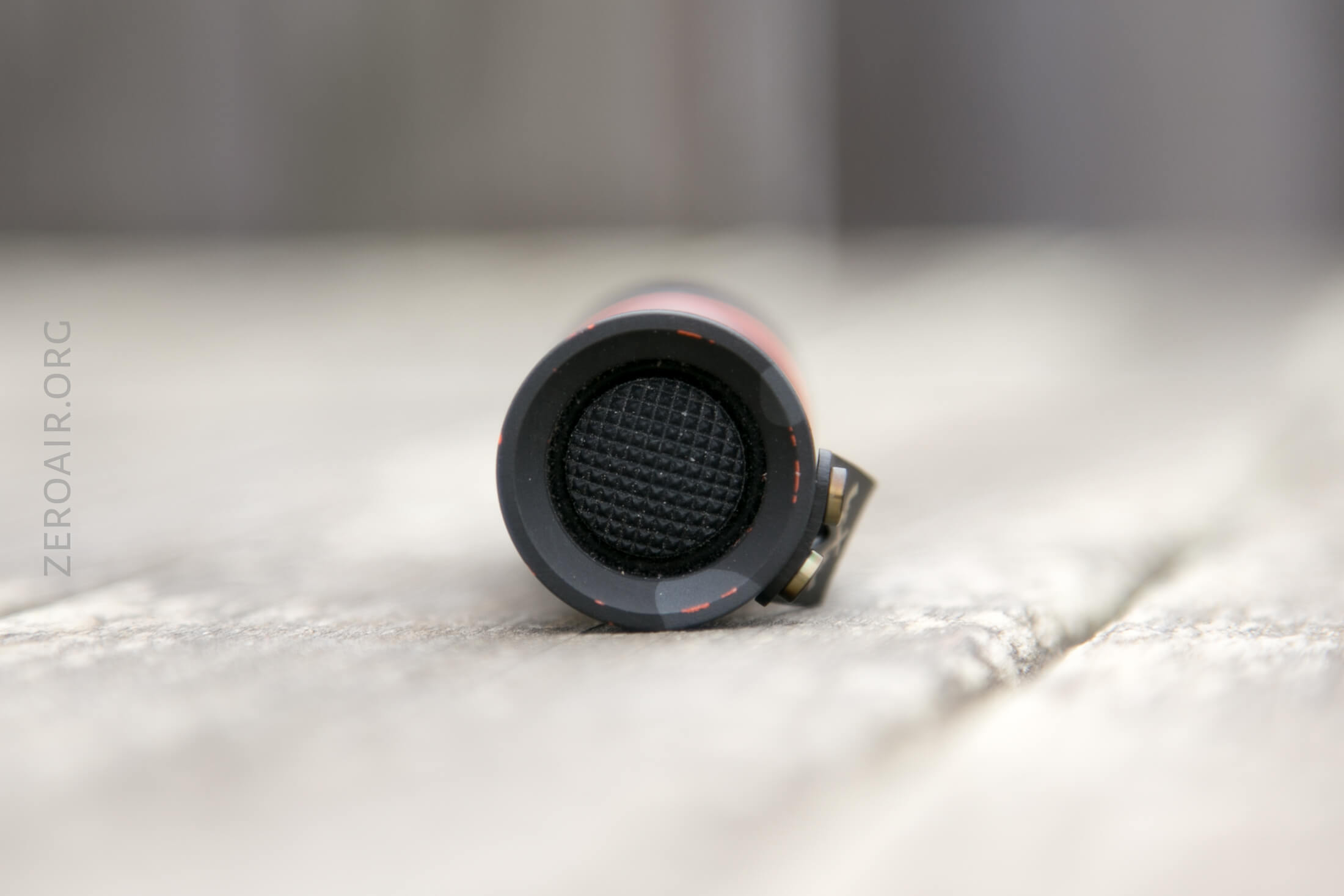 I don’t have a UI table for you, but I do have a flow chart that was made for another H17f light, and is applicable for this one too.

I had occasion to use that flow chart quite a bit during messing around with this light, and I have to say, it’s pretty useful.  I even printed one for my desk.

The emitter in my single version of the Huckleberry is a Nichia 219b, my all-time favorite emitter.  It’s very good in this light, too.  The reflector is smooth and provides a tight hotspot.  The emitter might look off-center below but that’s just the glow gasket, not the emitter (at least best I can tell.

That glow gasket is very glowy.

These beamshots are always with the following settings:  f8, ISO100, 0.3s shutter, and manual 5000K exposure.  These are just more or less random modes out of the 24 modes available in the H17F.  That said, the lowest seen here is in fact the lowest option I could get, and the highest seen here is a current of around 2.68A (not the highest, which was pulling over 5.6A during some brief tests.)

The 219b in this light (left) doesn’t match my Killzone 219b, but I am not really surprised by this.  Unfortunately, the invoice doesn’t show what temperature the 219b used is.