Here’s the Brinyte PT28 Oathkeeper Flashlight, and it’s well-featured.  It offers magnetic charging and a tactical ring. Read on for more!

I think there’s just one emitter option but there are two body colors.  Desert tan (seen here) and black.

This is a nice light.  It’s very capable and meets specifications.  The emitter is very cool white (angry white, even), so that’s not my favorite feature.

I didn’t get a manual with this light, unfortunately.  I’d love to have one.  I imagine your purchase will come with a manual.

Build quality is good.  The light feels good in my hands. 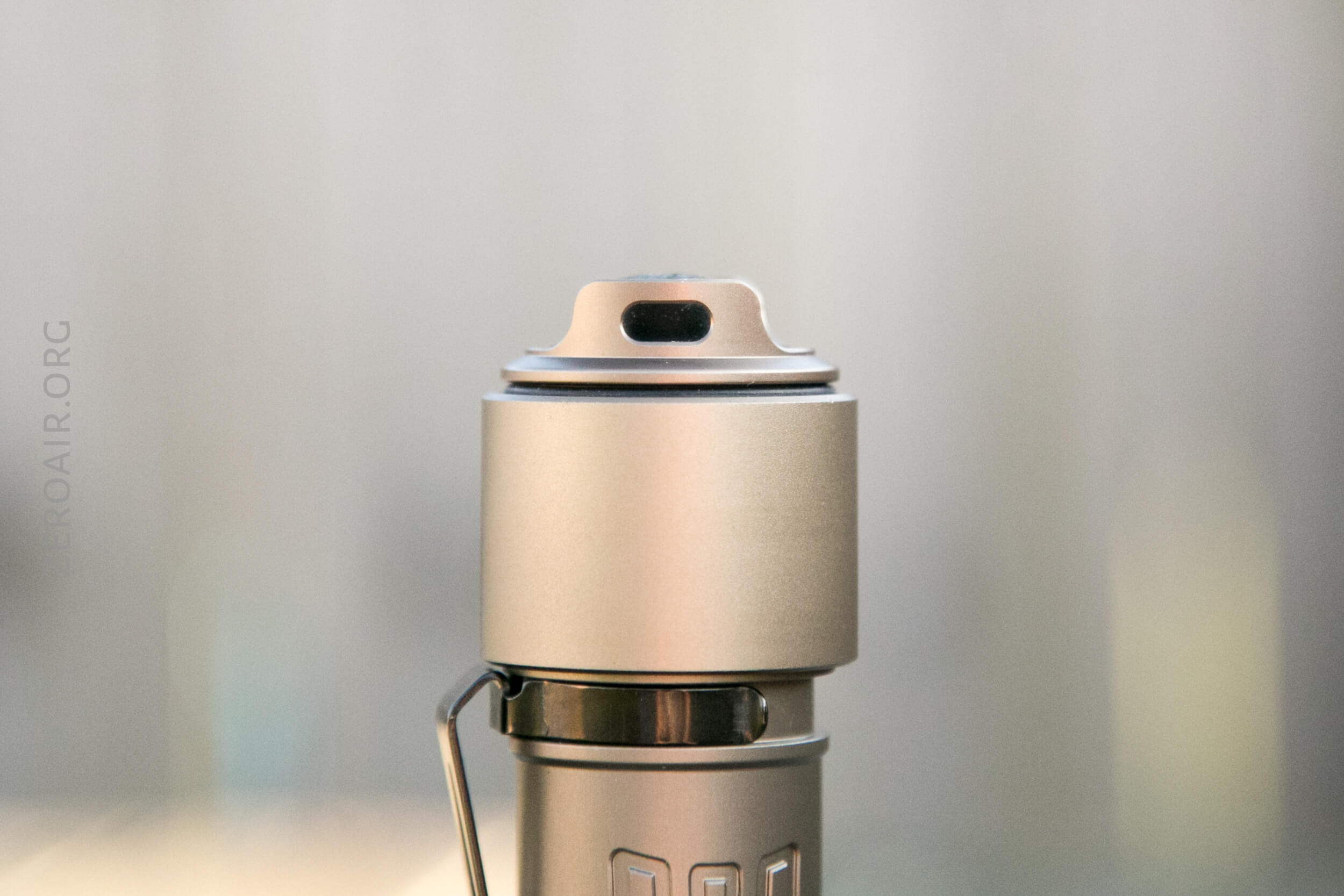 The tactical ring adds a bit of bulk on the tailcap but that’s expected.

It’s also keyed, so it’ll only go on in one spot, and it won’t spin around when it’s installed.  There’s a little bit of play when installed, but not much.

The threads are unanodized and square-cut.  The on-board charging necessitates the inner sleeve, which can be seen peeking out below.

As you’d expect, both head and tail end have springs.  A tactical light needs that.

The body design is well planned enough that the little divot the tac ring is keyed to is very subtle.

The bezel also has some relief to allow light to show when headstanding.

There aren’t any official size specs.  All these measurements are my own.

I’m not sure what the “most preferred” way to carry the PT28 will be.  The nylon pouch is quite … featured.  There’s a rotating plastic belt loop and a stretchy 18650 holder.

It’s a good pouch.  I don’t really use pouches, but this one is nice.

The head and tail are exposed for use while in the pouch, too.  Also note the 18650 which is installed in the pouch below.

The light also fits with the tactical ring installed.

Also included is a lanyard, which has the features of a normal good lanyard and has a metal clip for very easy attachment.

This clip is likely intended to fit on the tailcap loops (either of 2) but it’ll also fit in two places on the pocket clip.

Another way to handle the light is this tactical ring.  As I said above, it’s keyed, and so won’t rotate when installed, but also has just about 2mm worth of play when installed.

The tac ring doesn’t prevent any other retention option.  Finally, below, see the pocket clip.  It’s a friction fit clip and very snug.  Not a cheap clip either – it has smooth edges.

The PT28 is powered by a single 18650.  Brinyte includes a cell suitable for this light.  It’s also possible to run this light on 2x CR123 because the acceptable top voltage is 6V.

The cell goes in with the positive end toward the head (as with most lights).

I wasn’t able to test the light with my bench power (something just didn’t work right) but the runtimes do indicate clearly that the light has LVP at around 3V.  High output is exceptionally stable for nearly the entire runtime.

The included charge cable is USB to proprietary magnetic.  That connector connects to the head port seen below.

Charging proceeds at around 2A, which is a good charge rate.  Full charging takes only around 2 hours.

During charge, the indicating switch is red.  When the charge is complete, the switch turns green.  If something is wrong, the switch is orange.  All during this time, the magnetic charge connector is blue (bright blue).

There’s a bit of ripple on low (left) but no PWM anywhere to be seen.

There are two switches on the PT28.  First is the mechanical tail switch.  It has a nice Brinyte logo.

Secondly is the e-switch on the head, which is exactly opposite to the charge port.  This is an indicating switch.  Right after turning the light on, the switch will indicate the charge level, as follows:

I didn’t get a manual so I could very well miss something in the UI.

^ It is not possible to change the mode while in momentary output.

The emitter is a Cree XHP35 HD, and quite cool white.  I suppose I’d guess it at around 6500K but it could be cooler.  You sort of expect that out of a tactical light, I think, but it can still be a shade jarring.  The reflector is smooth.

Here’s a link to a relevantly filtered page on parametrek.com.  I use that site a lot!