The Cyansky K3 Tactical is a new flashlight by Cyansky offering a dual switch interface, the new Luminus SFT-40-W emitter, and a tactical feature set.  Read on for testing!

Official Specs and Features of the Cyansky K3 Tactical Flashlight

There is only one version of the Cyansky K3 Tactical flashlight.

With cell (as seen in this review) the Cyansky K3 Tactical flashlight costs $84.95.

Cyansky fills an interesting market.  They make quality products and seem to be a great up-and-coming brand.  This Cyansky K3 Tactical flashlight is no exception.  This is the first SFT-40-W flashlight I’ve seen, and the performance is quite good.  The Cyansky K3 Tactical offers great build quality, and looks nice too! 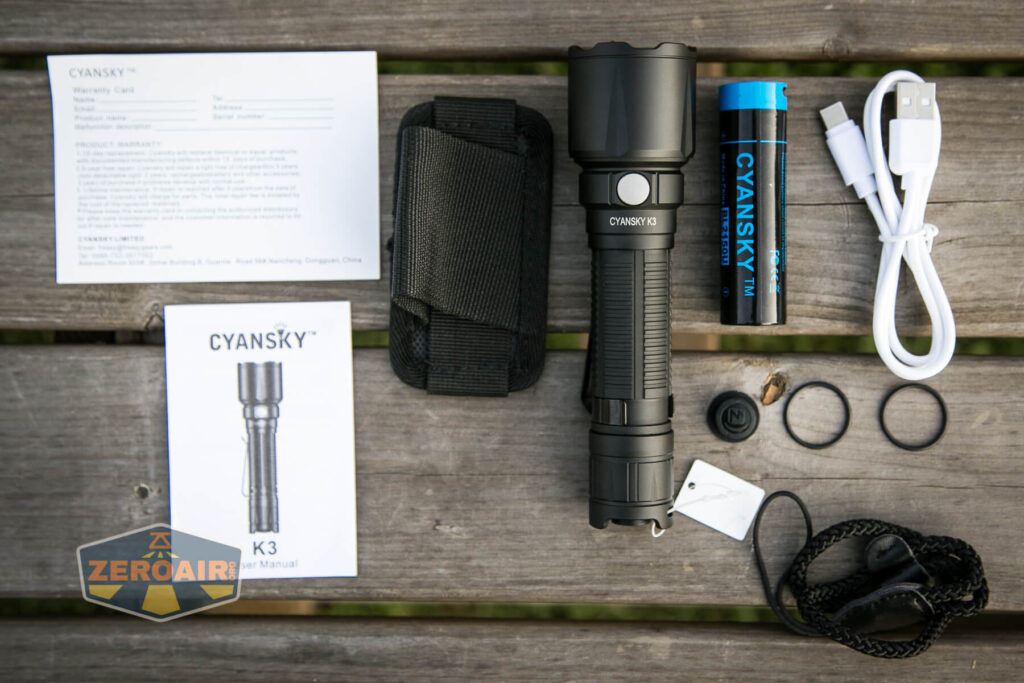 This nice little note is included on a hang-tag on the light.

As I said above, the Cyansky K3 Tactical flashlight is a very well-built light.  Cyansky does this… they build very nice lights!  I’ve reviewed a bunch of them, and even in categories I might not chase, it’s easy to note that the lights are still nice quality.

This is a “tactical” flashlight – though I’m not certain what the qualifiers are for “tactical.”  Strike bezel?  Check.  Dual switch interface?  Check.  Momentary turbo or strobe?  Hold up wait…

The head – the biggest diameter part, that is – looks to be removable.  I was unable to unscrew that part, though.

Cyansky touts this bezel as a zirconium bezel.  I don’t doubt that but I do think it’s those little inset balls (the glass breakers) that are zirconium and not the whole crenelated part you can see below.  (In fact I don’t even think that’s a separate part from the head itself). 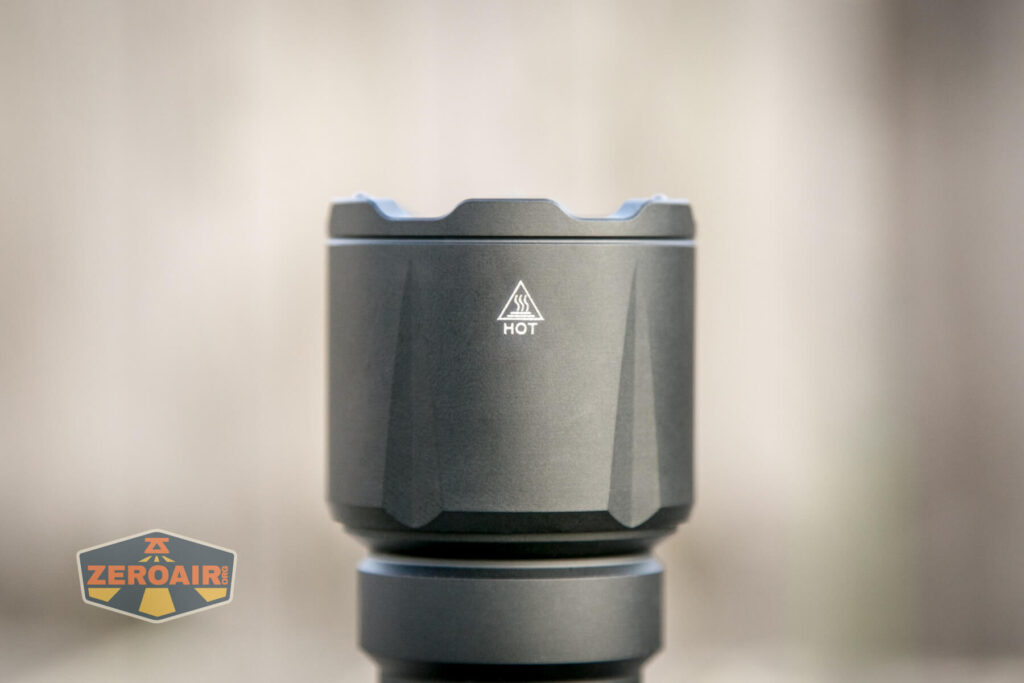 Below you can see the tailcap removed.  The spring is just a little proud (and that’s fine).  The threads are square-cut, anodized, and lightly lubed. 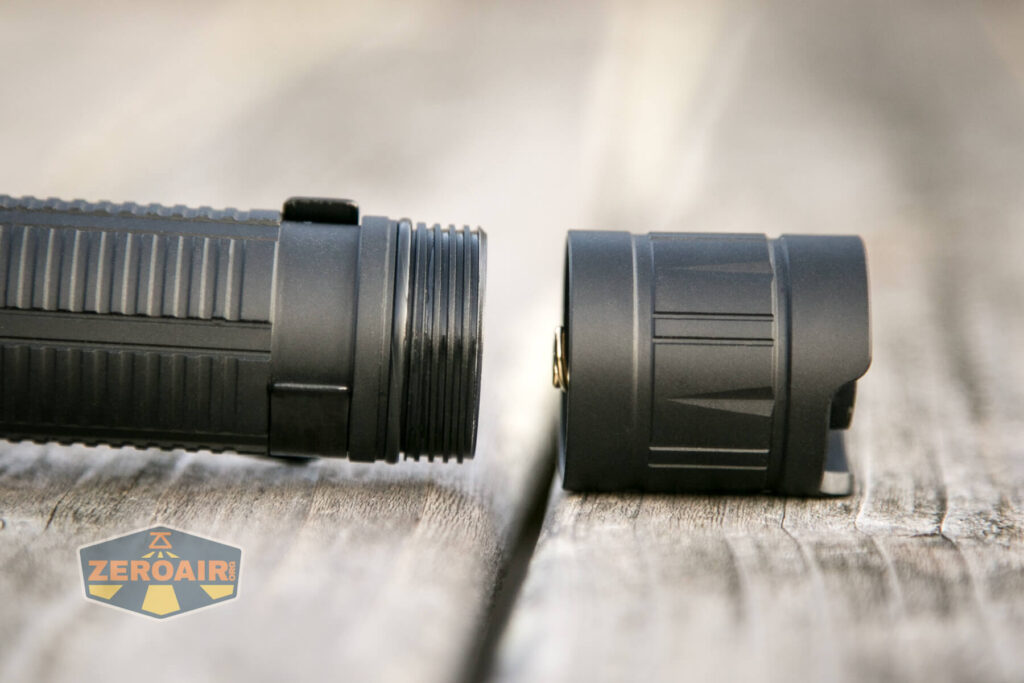 Inside the tailcap you can see that the spring is quite long.  The head doesn’t have a spring at all, which doesn’t support the idea that this is a tactical flashlight.  You can correct me if I’m wrong about that!  The idea is that dual springs would keep cell contact during weapon recoil.

On the other hand, this tailcap spring is very beefy and might stand up to recoil fine.  I turned on the light and banged it around a bunch and the light stayed on.  But I didn’t test it with recoil. 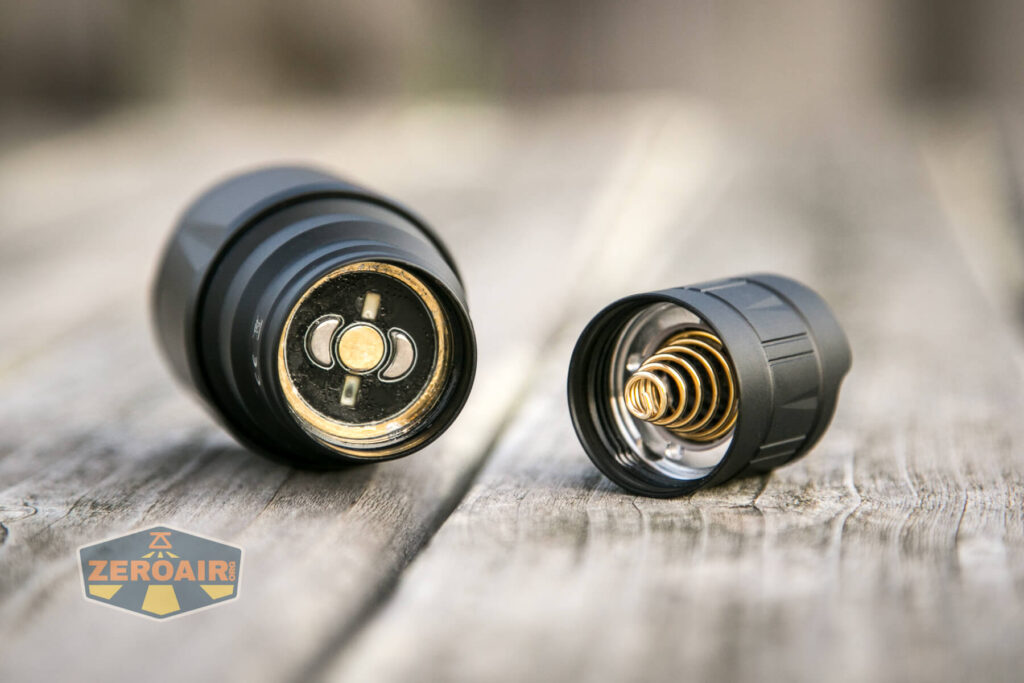 You’ll probably notice the pocket clip first, though there are a few options for carry.  The clip is a standard friction fit variety.

This clip fits only on the tail end of the Cyansky K3 Tactical flashlight. 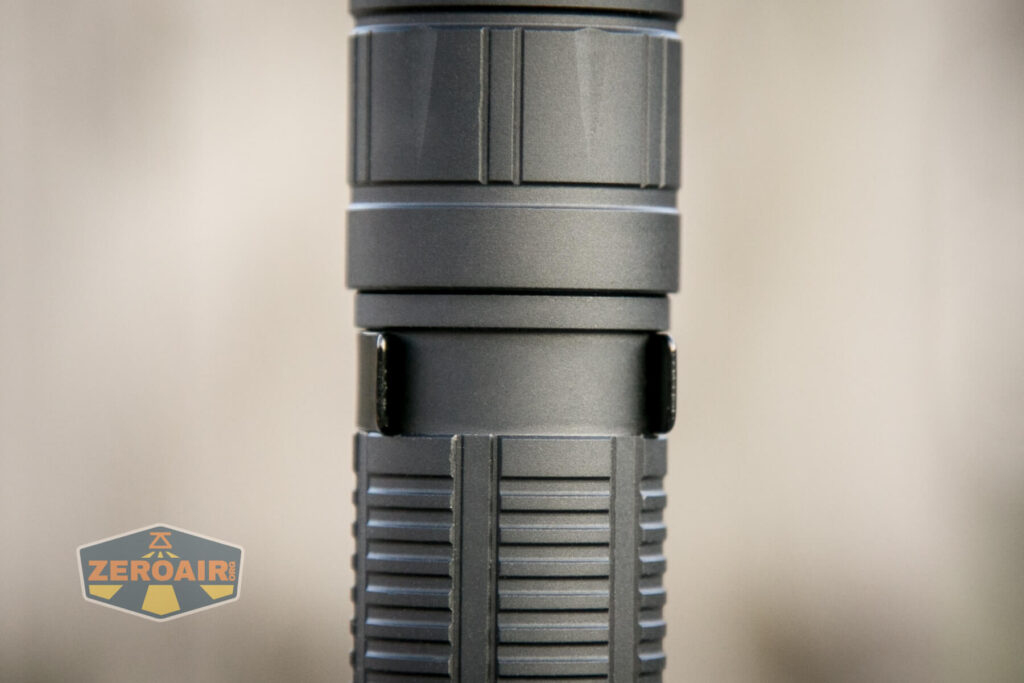 Next for carry is the lanyard.  You could likely attach the lanyard on the pocket clip, but I’d go with these two holes on the tail end instead.

Only one side of the tailcap has this hole set. 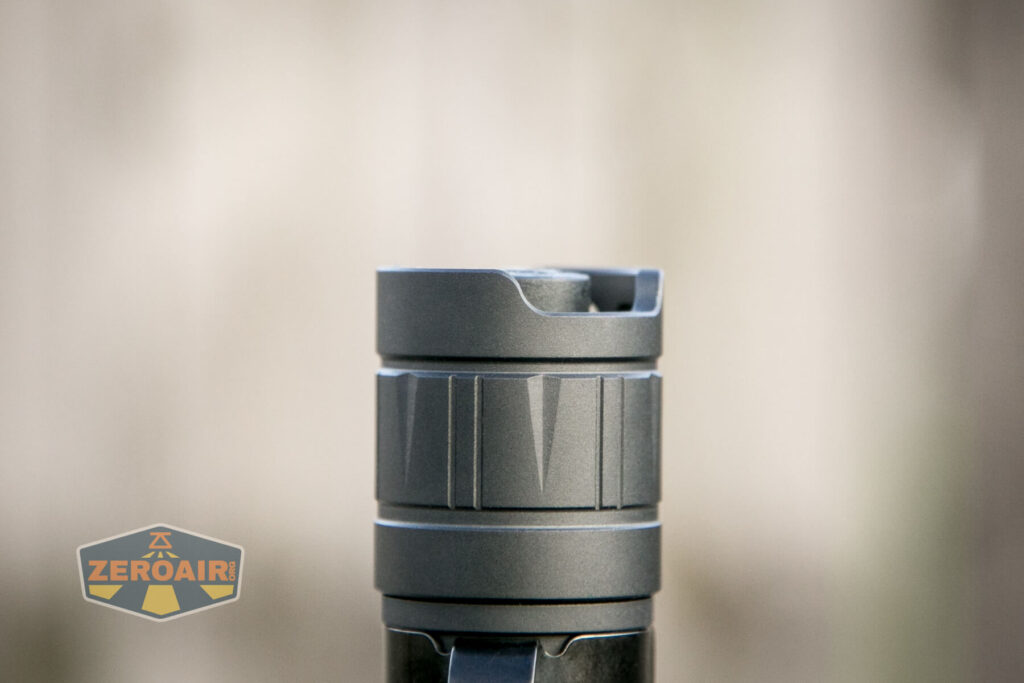 The lanyard is what I’d probably describe as “nothing special.”  It gets the job done, and is quite lanyard’y, but overall is just a simple piece of cord with an adjuster. 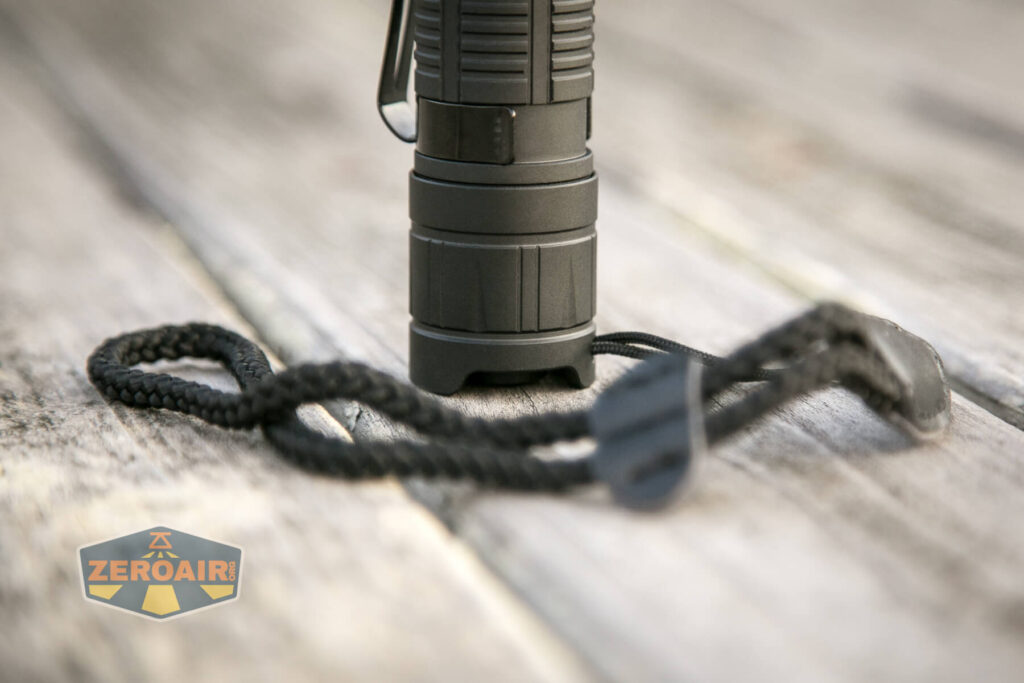 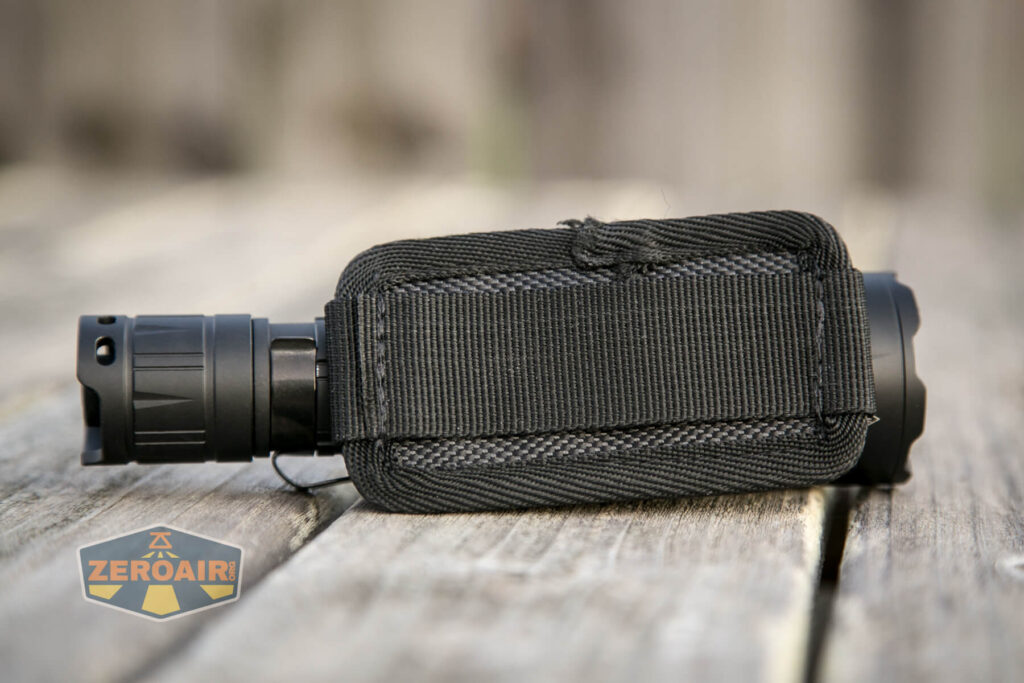 The Cyansky K3 Tactical flashlight is powered by a single lithium-ion cell.  Cyansky includes an appropriate cell – a 5000mAh 21700, the BL2150U.

That said, a button top 18650 will work in a pinch, but it’s loose inside there.  It’s the button that’s important here.  Button top cells will work.  Flat-top cells will not work.

The cell fits into the K3 in the usual way – positive terminal toward the head. 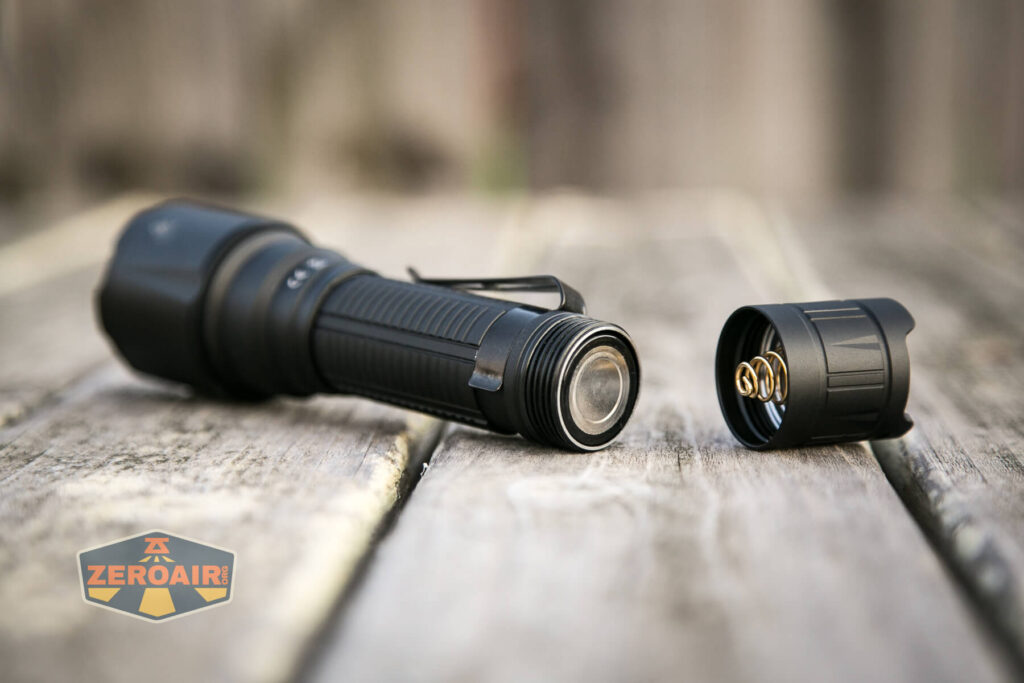 Here are a couple of runtimes.  There’s a big stepdown at around 1.5 minutes, but then the light holds around 900 lumens for over an hour.

Output on high is flat for over two hours, at around 750 lumens.

In the runtime graphs above, and on bench power, I did not observe low voltage protection.  This is sort of to be expected with a tactical flashlight.  The light steps down to “very low output” at around 2.6V and then finally shuts off (ish) at 2.5V.

As stated, the cell has some other features too.  There’s built-in USB-C charging, by way of a USB-C port on the positive terminal end. 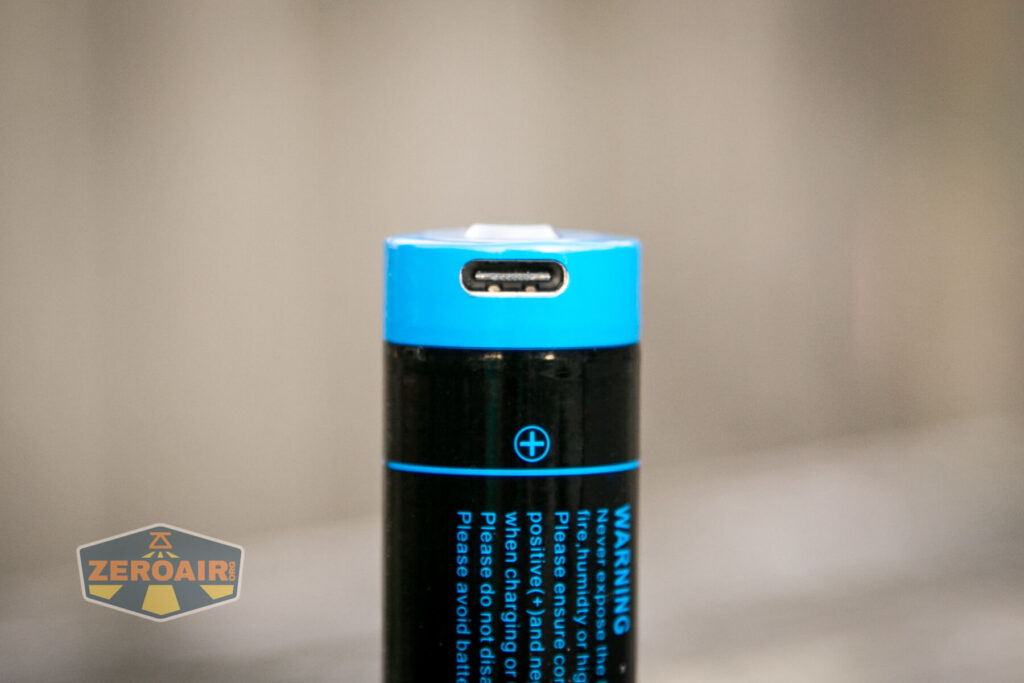 An appropriate cable is included – USB to USB-C.

Charging proceeds at a fairly slow 1.5A or so, which is well under 0.5C for this 5000mAh cell.  Time required is around 3 hours, and the terminal voltage seems to be consistently 4.19V, a very good termination voltage.

No real PWM on any mode.  Low shows some squiggles, which I don’t believe is PWM.

Two switches are used for control of the Cyansky K3 Tactical flashlight.  First is the mechanical tail clicky.  It’s a forward clicky, which allows momentary actuation.  This switch also serves as a mechanical lockout to prevent any parasitic drain on the cell 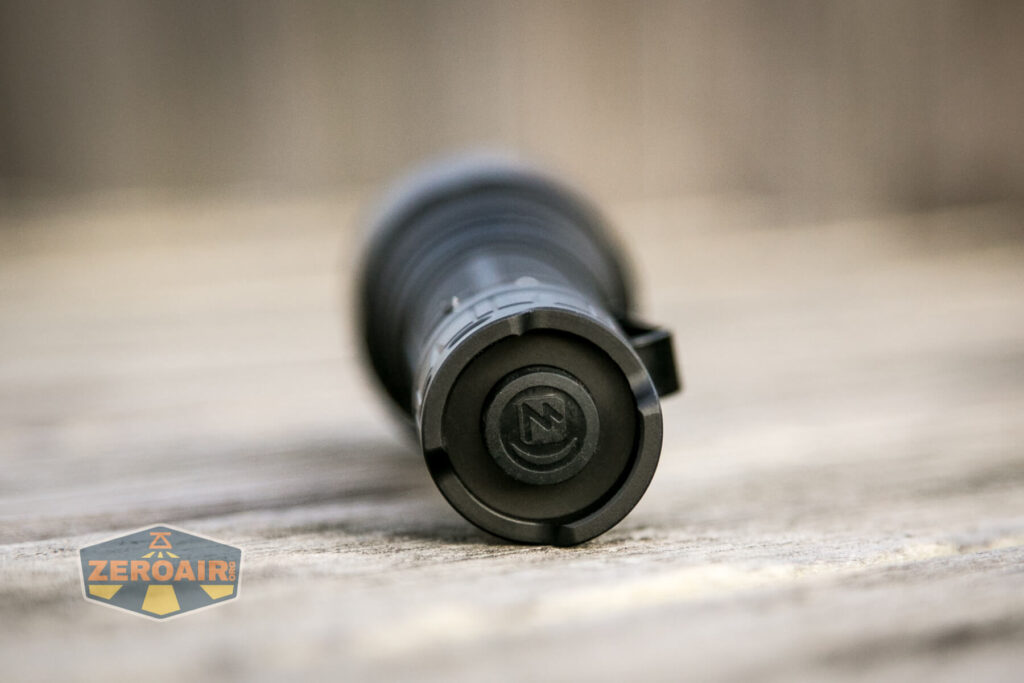 The switch cover is big but the switch itself is normal-sized.  It’s not terribly thick, so you can feel the actual switch underneath.  The clicky is very clicky and the action is low.

The second option for operation is the e-switch on the side near the head. This switch is metal(ish?) and very proud.  Also, it doesn’t compete with anything else, so it’s very easy to find without looking.  Notably this switch (cover) is improved from lights like the H3, which is otherwise a very similar flashlight.

The user interface is not complicated.

For this being billed as a tactical flashlight (and also “looking like one”), it’s surprising that there’s no easy or direct access to turbo or strobe.

The emitter is a Luminus SFT-40-W. A smooth deep reflector is used here. 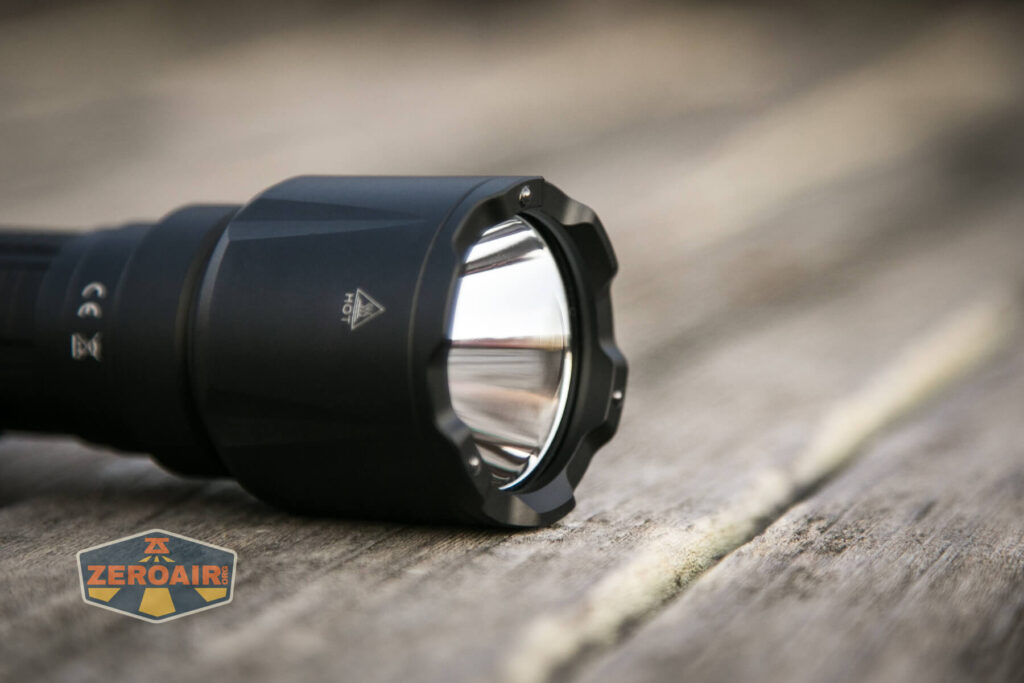 The bezel is crenelated, so light will shine out when headstanding (and on).

Again, Cyansky bills this bezel as zirconium, but I suspect it’s just those three-strike points that are zirconium.  They aren’t sharp; these are tiny spheres. 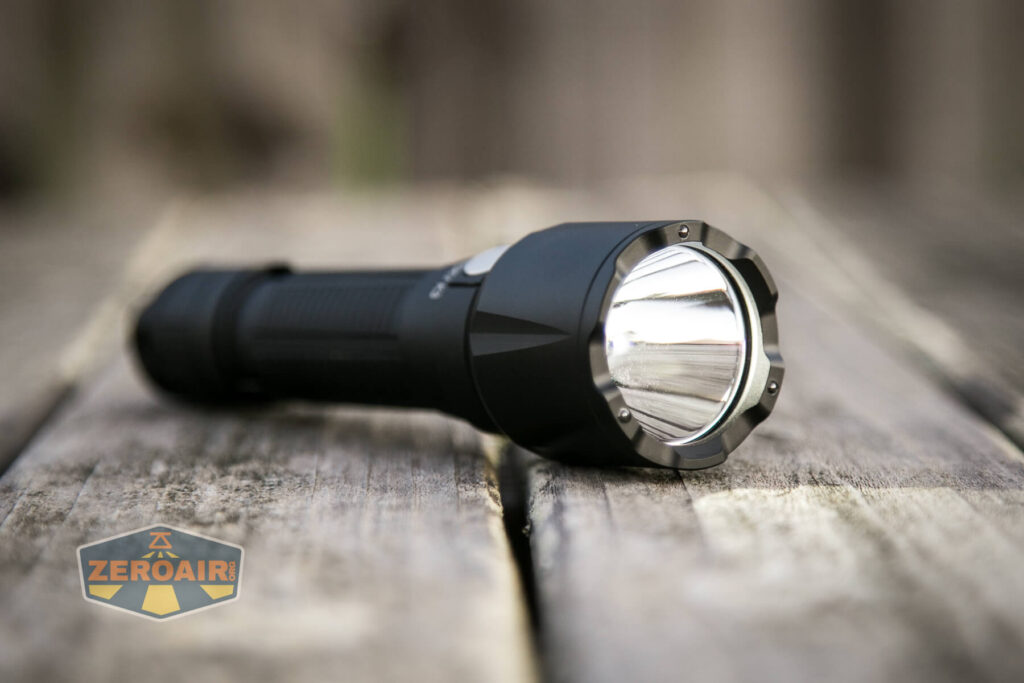 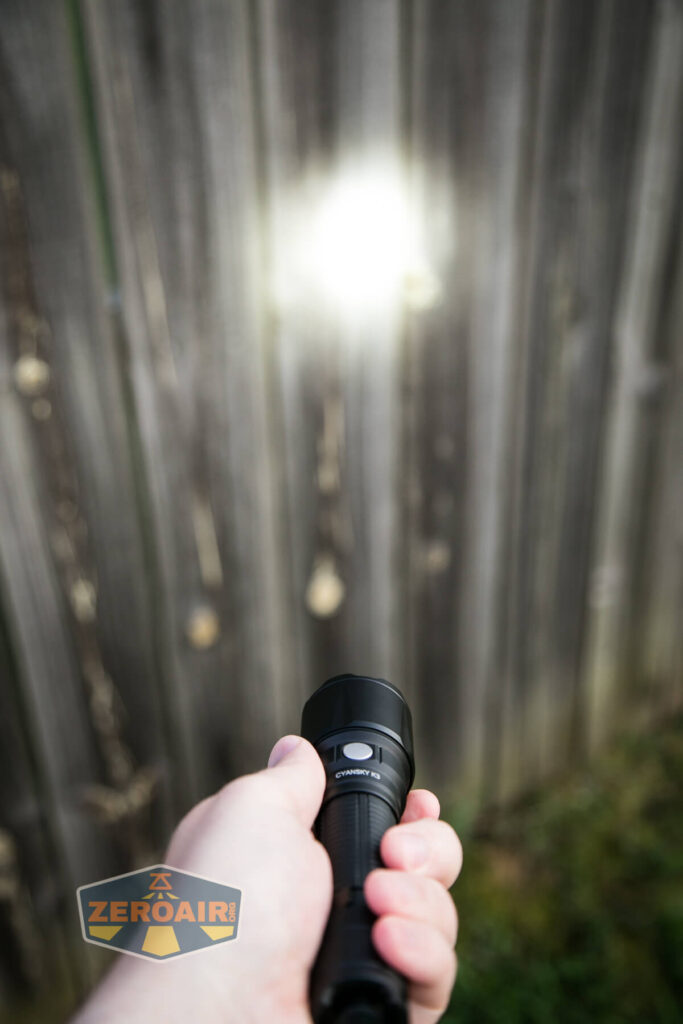