Here’s a light from GearBest that I saw, thought looked neat, and GearBest agreed to send.  I haven’t heard of Amutorch before, but they have a few offerings.

Just one version of this light!

Looks like MSRP is around $108, but the street price is going to be around $86 or less.

This is a well built XHP70.2 light which suffers from the tint issues of the XHP70.2 (greenish spill, blue corona).  Still the on-board charging makes it compelling, particularly if a 3-cell 18650 is your thing.

The AM30 arrives in a simple cardboard box, with little printing and … nothing in English.  There’s a GearBest inventory sticker, too.

The manual is in Chinese, unfortunately.  I got most of my operational information from the Amutorch official page.

This is a superbly built light.  The anodizing is nice and feels thick.  The parts fit snugly.  The reflector is extremely smooth with little aberration.  The cells are held snugly but not overly. The cooling fins are unusual, yes, but do increase the surface area quite a bit, and in my testing seem to help dramatically with cooling.  The cell contact points on the head are nice fat brass rings.

The cooling fins give this light a bit of a distinctive look, too.

Below, note the brass contact points on the head.  These are big and thick, and make great contact.  The tail end has thick firm springs.  I did not remove the driver from the head – I’m not sure if it’s press fit, or screwed in.  I don’t see any spanner connect points, so I have to guess it’s press fit.  And with the e-switch and charging, that makes fairly good sense.

That said, it’s still a fairly small light, for being 3×18650, and having such a large reflector.

Amutorch provides a lanyard, and there’s an unusually large hole in the tailcap for connecting this lanyard.

And that’s it.  There’s no pouch, and of course no pocket clip.  I’m surprised Amutorch concluded that a spare lens was a better inclusion than something like a pouch, but it is what it is.

The AM30 is powered by three 18650 cells.  I found the light to be fairly picky, unfortunately – it didn’t like button top cells, and certainly does not like long cells.  I ended up using three unprotected NCR cells.

The cells are in parallel.  The light will work with any number of cells: 1, 2, or 3.  As far as I can tell, all modes work with all cell numbers.  This is a little surprising to me since running an XHP70.2 from one cell requires a boost driver.  And since the light has three cell capacity, one might thing they’d just series them and buck the voltage.  On the other hand, I suppose there’s no good way to series 3 cells, when aiming at 6V.

The runtime…. This runtime is on High (not turbo! made a mistake on the table, sorry!!).  If I’m honest, I forgot to turn on cooling until around 43 minutes.  This does provide some interesting information, however – the light has nearly flat output for the first 40 minutes, even without cooling!  I can’t really speak to why the light dips then bounces back up to nearly 100% (doesn’t seem temperature related).  I expect with moderate cooling, that first 40 minutes would be nearly flat.  Also note that this light gets hot.  Like hooooooooot.  Up to 66° C  on the very outside of the bezel).  By no means the best place to measure temperature but that’s what I’m able to measure.  The product literature says when the mcpcb reaches 80° regulation will kick in.  I…. can’t imagine that didn’t happen here; it seems like temperature was on a steady rise.

Strangely soon after I turned on cooling, the light stepped down to around 45%, and stayed there for a while.  Until I pulled the cells for a voltage check, in fact.  After a voltage check, I put the light back on turbo, where it stayed for a few minutes, then shut off, due to voltage protection.  The listing says this will happen at 2.8V, but I found it to be much higher (around 3.3V).  At this point the indicating side switch was blinking red.

This light also has on-board charging!  This is facilitated by a proprietary magnetic cable, which is included.  The other end is USB.  This is fine in that it adds versatility (ie, one could charge this in their car from a cigarette plug adapter) but it also means that charging isn’t going to be very fast.

I was using a 2.4A capable outlet, and as you can see, charging happened at around 900mAh.  With three cells, that’s 0.3A per cell.  With, say 3000mAh cell capacity, it’s pretty easy to do the math to know how long this will take (a long time).  Fortunately the light delivers this 0.9A at a very consistent rate, and that makes it very reliable. 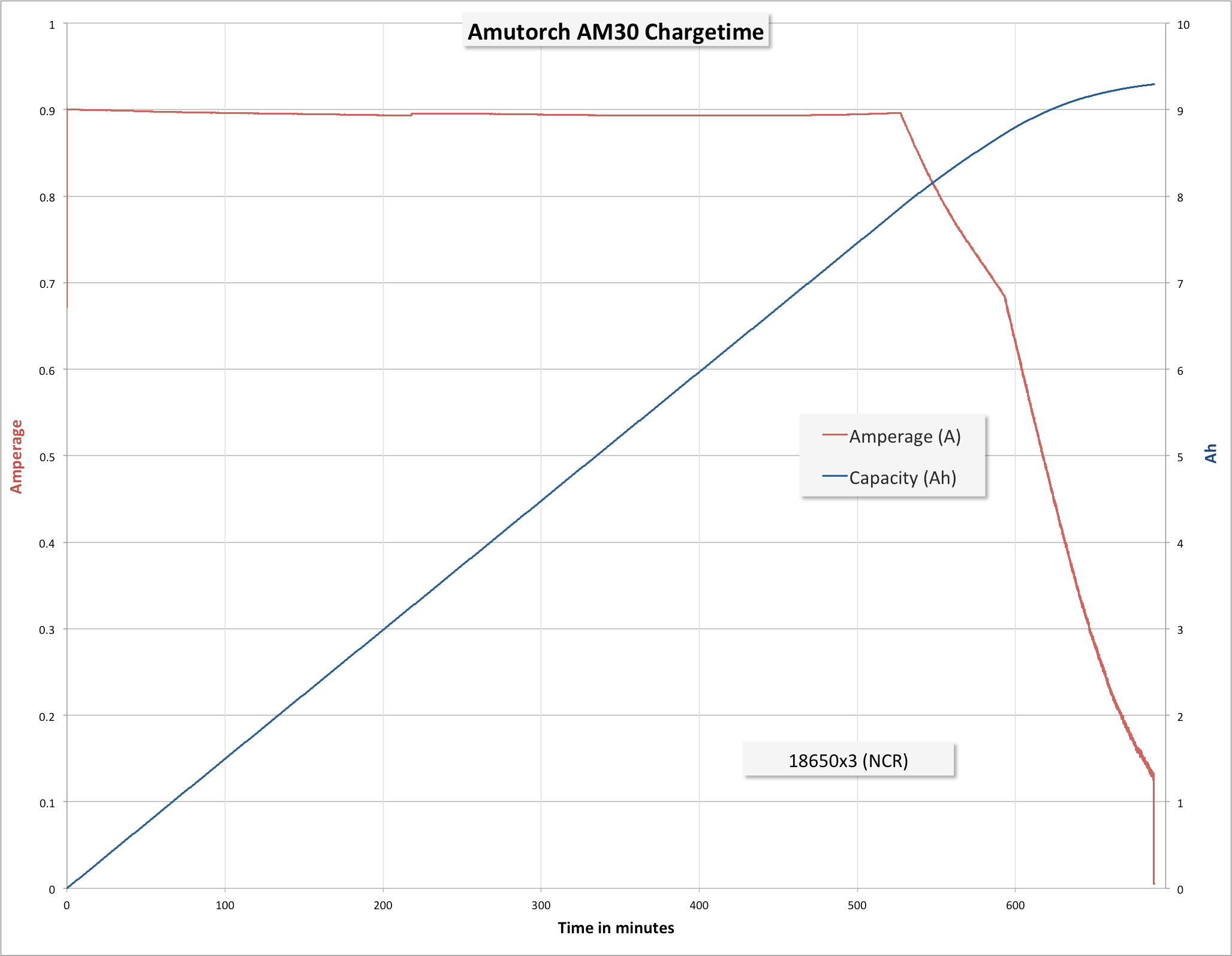 I don’t love a proprietary connector, but this one works acceptably.  I can’t see one of these available separately.  So don’t lose yours!!!

There’s a single switch on this light.  It’s a metal side e-switch, with indication feature.  I’m a bit of a switch snob, and I have to tell you: I really love this one.  The switch is very low action, but a positive click.  The indication surrounds the whole switch, and is very reminiscent of the work u/emarkd did on his Convoy S2+, which I was always extremely impressed with.

The UI is simple (and also notably, different from what’s listed on the aliexpress page for this light!)  Click for on (mode memory).  Click to advance modes (L>H direction).  Hold for off (except in turbo!!).  Double click for turbo.  Click to get out of turbo to last mode.  Triple click from any state to get strobe.  Click to get out of strobe.

The difference in Turbo and High is very slight.  (That’s why I ended with a High runtime, instead of a Turbo runtime.)

The manual mentions a lockout feature, but I couldn’t get that work on my sample.

During all operation, the side switch will give an indication of cell capacity.  When full (or >3.4V), the switch is solid green.  Between 3.0 and 3.4V, it’s solid orange.  Below 3.0, the switch flashes red.  The difference in orange and red from this switch is slight, but the difference in solid and flashing is obvious.

I really, really love this switch!!

Same thing I said for the recent JETBeam TH20:  “The massive emitter in this light is a Cree XHP70.2.  It’s a cool look, and provides loads of output.  The beam tint isn’t great (leaning toward green on the spill, and blue/cool in the center).”  This beam profile, however, is different.  The beam profile is like that of a much bigger Emisar D1 – it’s a very clear spot, but perfectly even across the spot.  Quite unusual! 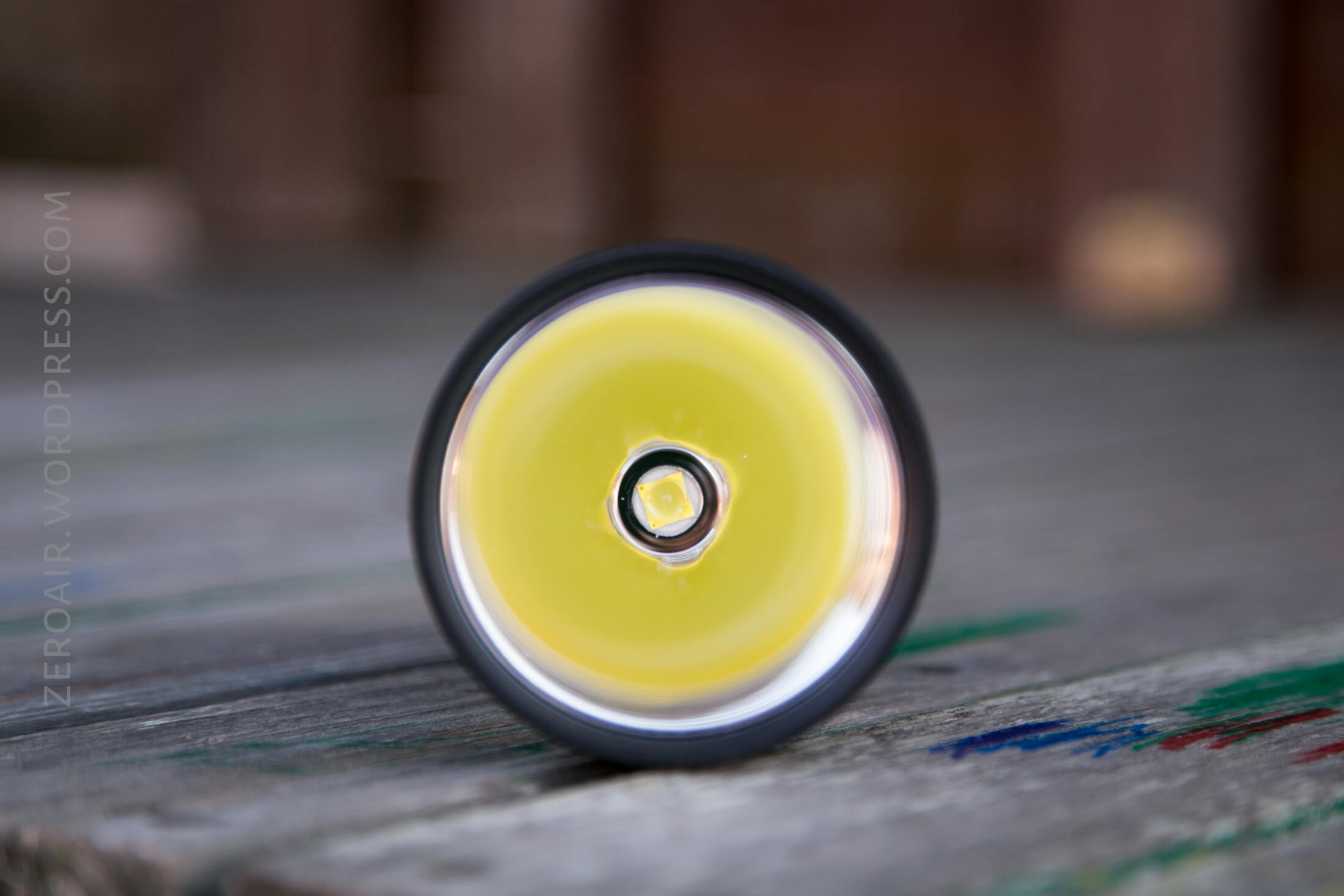 There are a few similar lights, like the Acebeam K30 and Eagtac SX30L3 Pro but those are not throwers.  Among the group the AM30 is the only thrower, and also has on-board charging.

Trying to finish this year with a bang!!  I hope to wrap up a few non-flashlight items soon, like the iMAX B6 Mini, and a couple other random things.  Most likely next, however, will be the JETBeam T6!

0 thoughts on “Amutorch AM30 Flashlight Review”